Two wealthy law-school students go on trial for murder in this version of the Leopold-Loeb case.

"Murder is nothing. It's just a simple experience."

Long before the O.J. Simpson case, another brutal murder nabbed the dubious title of "crime of the century." The 1924 slaying of a defenseless 14-year-old boy by Nathan Leopold and Richard Loeb grabbed nationwide headlines, largely because the two killers were completely sane teenage geniuses who were involved in a homosexual relationship and simply wanted to see what killing another human being felt like. The cold, calculating 17-year-olds used their superior smarts to meticulously plot what they hoped would be the quintessential perfect crime, but an unforeseen slip-up aroused police suspicion, leading to their eventual arrest and trial. Legendary attorney Clarence Darrow defended the notorious teens, who never expressed any remorse for their horrific deed. They were only sorry they got caught.

Alfred Hitchcock first tackled the grisly true-life tale in his innovative 1948 film, 'Rope,' which famously gives the impression it's shot in a single take. Several years later, author Meyer Levin revived interest in the case, writing a partially fictionalized, highly acclaimed account of the crime that would quickly attract Hollywood's attention and become 'Compulsion.' The passage of time allowed director Richard Fleischer to address the story in a frank, edgy manner, and though legal issues prevented the use of the killers' real names, his superb adaptation still paints a chilling, unvarnished portrait of sociopathic behavior, and how too much money, intellect, and ego can corrupt the human brain.

Judd Steiner (Dean Stockwell) and Artie Strauss (Bradford Dillman) are inseparable friends, yet remain strangely isolated from the mainstream social spheres at the college they attend. Despite enormous wealth, both endure difficult home lives, and their headstrong nature, insufferable arrogance, and deep-seeded attachment mask their insecurities and vulnerability. They make a pact to "explore all the possibilities of human experience," and that includes its more sinister, unlawful elements. Petty theft is first on their list, but it's not long before murder - the "true test of the supreme intellect" - crosses their minds. Judd says "it must be done as an experiment - detached, with no emotional involvement," while Artie can't wait to watch the police run around in circles trying - unsuccessfully, of course - to crack the perfect crime.

It quickly becomes apparent, though, their crime isn't so perfect after all, and when a wily investigator (E.G. Marshall) chips away at their alibis, Artie and Judd begin to crack, leading to a bitter rift, their subsequent arrest, and a flamboyant defense by famed alcoholic attorney Jonathan Wilk (Orson Welles).

Elegantly photographed by William C. Mellor (who the same year would win his second Oscar for 'The Diary of Anne Frank') and directed with grit and panache by Fleischer (who would later helm two other noteworthy films about grisly crimes - 'The Boston Strangler' and '10 Rillington Place'), 'Compulsion' instantly thrusts us into the twisted psyches of Judd and Artie and their intense codependence. Though the sensational aspects of the case had to be toned down to satisfy the censors (the sadistic crime is never enacted and the homosexual bond between the two young men is transmitted only through strong innuendo), the film still packs a powerful punch. Fleischer depicts pathological evil with clinical precision and Richard Murphy's tight script reduces the victim's age from 14 to 7, which increases the killing's shock value.

The screenplay also injects a bit of sympathy for Judd, whose painful isolation and introversion lead him to be cruelly yet willingly manipulated by Artie...much like another disturbed killer, Norman Bates, would be psychologically controlled by his mother. Interestingly, 'Compulsion' would be released a year before 'Psycho,' yet the two films share a couple of other striking similarities. A caring coed (Diane Varsi) tries to draw Judd out of his shell - just as Janet Leigh's Marion Crane attempts to do with Norman - with disastrous results, and, shades of Norman, Judd is a noted expert in ornithology who also dabbles in taxidermy. Some of the shots of Judd in his room with stuffed birds looming above him eerily presage similar images in Hitchcock's 'Psycho.'

Welles doesn't appear until the film's final third, yet quickly dominates the story. At 43, he was a good 25 years younger - and at least 30 pounds heavier - than Darrow at the time of the trial, and his overdone makeup only emphasizes the dramatic ruse. Like his counterpart, Welles delivers an impassioned plea against capital punishment (Darrow's oration would last a whopping 12 hours, but Murphy mercifully whittles down Welles' summation to about 10 minutes), and performs it with customary gusto, smartly limiting showy theatrics. Though Welles reportedly was quite upset he wasn't asked to direct 'Compulsion' - and, as a result, acted like a grumpy prima donna during shooting - you'd never know it from his riveting performance. His eloquent speech potently transmits the anti-death penalty viewpoint, while at the same time we ask ourselves whether the lives of Judd and Artie deserve to be spared.

Welles may steal the spotlight for a while, but Stockwell and Dillman own the film, creating an electric chemistry that ignites the screen. Stockwell especially impresses, all but erasing his previous enviable tenure as one of Hollywood's most successful child stars. His laser intensity, anguish, and icy resolve contrast well with Dillman's gregarious bluster and obnoxious conceit. Varsi, who would sadly disappear from films for several years following 'Compulsion,' files a sympathetic portrayal, and Martin Milner, who would go on to make quite a name for himself on TV's 'Adam-12,' is quite effective as a cub reporter - and friend to Judd and Artie - who uncovers a key piece of evidence in the case.

Though casting actors closer to the age of the real killers would have further emphasized the crime's shocking nature and heightened the movie's impact, 'Compulsion' remains a taut, engrossing, and impeccably mounted production that faithfully honors a disturbing episode without glorifying or exploiting it. Fleischer's film holds our attention from the first frame to the last, and despite the prevalence of equally offensive murders over the past century, the Leopold and Loeb case remains deeply unsettling and endlessly fascinating...elements that keep this excellent motion picture both relevant and worthy of attention. 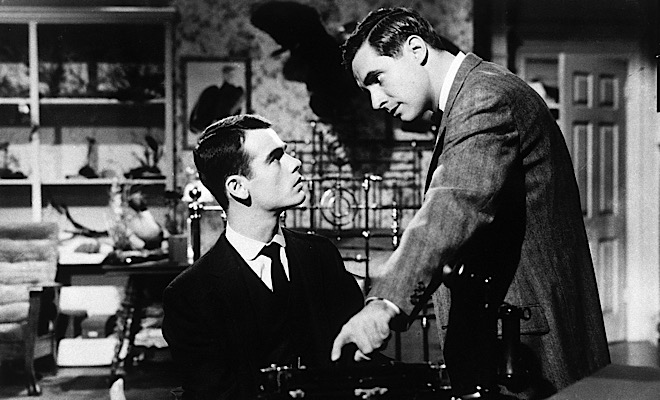 'Compulsion' arrives on Blu-ray packaged in a standard case. Video codec is 1080p/AVC MPEG-4 and audio is DTS-HD Master Audio 2.0. Once the disc is inserted into the player, the static menu without music immediately pops up; no previews or promos precede it.

Staggeringly gorgeous is the best way to describe this flawless 1080p/AVC MPEG-4 transfer from Kino Lorber, which was struck from a brand new 4K restoration. As Tim Lucas says in his commentary track, black-and-white CinemaScope is one of the most beautiful media, and this transfer - which showcases William C. Mellor's stunning cinematography - maximizes its impact. From the first frame to the last, the image leaps off the screen, thanks to impeccable clarity and contrast, luscious black levels, crisp whites, and exceptional gray scale variance. Grain is practically non-existent, yet the picture still exudes a lovely film-like feel, and no debris or damage mar the pristine source material. Clothing patterns and delicate fabric weaves are razor sharp and resist shimmering, the detail in intricate wallpaper designs and furniture carvings is easy to discern, and close-ups are so well defined, the artifice of Welles' heavy theatrical makeup is unfortunately emphasized. This is without question one of the finest black-and-white transfers I've seen in quite some time, and it supremely honors the craftsmanship of this dark, absorbing film. Kudos to Kino!

The DTS-HD Master Audio 2.0 track may not quite match the quality of the video, but comes darn close. Bold, brassy, yet brimming with nuance, this perfectly modulated mix is distinguished by a wide dynamic scale that embraces all of the high- and low-end tones without a hint of distortion. Sonic accents like referee whistles, jackhammers, and popping flashbulbs nicely punctuate the action, but more subtle effects like chirping birds, peeping crickets, and kids frolicking on a playground add essential atmosphere to the tale. Excellent fidelity and tonal depth help Lionel Newman's jazz score fill the room with ease, and all the terrific dialogue is clear and easy to comprehend. Best of all, no age-related hiss, pops, or crackles impugn the purity of this superior track, which really heightens the drama's immediacy.

Several films have chronicled the notorious Leopold-Loeb case, but none better than 'Compulsion.' Though the era's strict moral code forced director Richard Fleischer to finesse some of the story's more sensational aspects, he still crafts a frank, riveting portrait of two rich, brilliant, and hopelessly sociopathic teenagers who try to commit the perfect murder. Orson Welles may get top billing for what amounts to a glorified cameo, but Bradford Dillman and especially Dean Stockwell carry this disturbing drama with mesmerizing performances. A breathtaking 4K restoration headlines Kino Lorber's superior Blu-ray presentation that also includes excellent lossless audio and an interesting commentary track. 'Compulsion' is a finely crafted, fascinating production, and this first-class Blu-ray makes it a dazzling experience. Highly recommended.

Sale Price 17.11
List Price 29.95
Buy Now
3rd Party 14.99
In Stock.
See what people are saying about this story or others
See Comments in Forum
Previous Next
Pre-Orders
Tomorrow's latest releases