You've heard of Jack the Ripper, but maybe not John Christie, an equally notorious British serial killer who murdered seven women and one infant over a 10-year period between 1943 and 1953, and reportedly had sex with a few of his unconscious victims before delivering the fatal blow. His grisly story is the stuff of English legend, and in 1971, American director Richard Fleischer crossed the pond to immortalize it on celluloid. The result, '10 Rillington Place' (Christie's address and the scene of all of his crimes), is a deeply unsettling yet masterfully made film that's often difficult to watch, thanks to Fleischer's frank treatment of the material and exceptional performances by a highly talented cast.

The Christie case is noteworthy not only for its perpetrator's horrific deeds and calculated method of killing, but also because of its impact on the British judicial system, which mishandled the investigation and convicted an innocent man of one of the murders. That man, Timothy Evans, an illiterate, hot-tempered bloke who rented a flat in Christie's rundown tenement with his wife Beryl and baby daughter Geraldine, fell prey to Christie's subtle yet relentless manipulations, which - compounded by Evans' fear, confusion, and compromised mental faculties - ultimately destroyed him.

It's a devastating tale that resonates all the more strongly because it's true. And even though countless subsequent serial killers - from Charles Manson and David Berkowitz to Ted Bundy and Jeffrey Dahmer - have somewhat desensitized us to such demented and heartless violence, '10 Rillington Place' often provokes a queasy feeling of unease, despite the lack of any gore. That's a credit to Fleischer's keen storytelling ability and Clive Exton's tightly constructed script, both of which keep an intimate focus on the characters and foster a sustained aura of dread and claustrophobia. A veteran of the serial killer genre (if there is such a thing), Fleischer had previously directed 'Compulsion' (which chronicles the explosive Leopold-Loeb case) and 'The Boston Strangler,' yet his disturbing portrait of Christie raises the creepiness quotient exponentially. Like Hitchcock, Fleischer eschews graphic depictions of violence in favor of images of fear and foreboding that heighten the heinous nature of the crimes and their shocking impact.

It all begins in the movie's opening frames, when the seemingly mild-mannered, attentive, and caring Christie (Richard Attenborough) quickly dispatches his first victim, a woman with severe bronchitis who hopes Christie's miracle elixir will cure her ills. With the same cordiality as Sweeney Todd in his tonsorial parlor before he slits his patients' throats, Christie sits the woman down in his ramshackle abode and puts a mask over her face so she can breathe in the vapors from a mysterious chalky brew. Yet unbeknownst to this naive and trusting soul, he laces the mixture with gas, and as she inhales the acrid fumes, she frantically and futilely tries to wriggle free of Christie's ever tightening grip, until at last she succumbs.

Fast forward five years to 1949 and the arrival of the Evans family. The simple-minded Tim (John Hurt) toils at a menial job and regales his buddies with tall tales about his bogus privileged background while his comely wife Beryl (Judy Geeson) tends to their adorable baby girl. The couple loudly quarrels on a number of occasions, but the tensions reach a fever pitch when Beryl discovers she's once again pregnant. With no money for a second child, Beryl decides abortion is the only viable option and turns to Christie for fatherly guidance. Abortions, of course, are illegal, but the diabolical Christie convinces Beryl he has some medical training and can perform the procedure himself. With some trepidation, Beryl agrees, and after Christie has his way with her, he hatches a plot to pin her death on her distraught and frightened husband, who doesn't possess the tools to see through him.

The first half of '10 Rillington Place' immerses us in Christie's sick mind, and when it becomes clear what he intends to do to Beryl, it's more than most of us can bear. I found myself squirming more than once, wishing I could stop the inevitable, and that's a tribute to Fleischer's measured pacing and understated approach. Like the characters, we long to escape Christie's stranglehold, so when the film shifts gears midway through and becomes a police procedural and courtroom drama, it's a welcome relief. The story's second half, however, is even more fascinating (and depressing), as we witness a monumental miscarriage of justice that's almost as sickening as Christie's murders. Whenever possible, Exton used actual court transcripts in place of invented dialogue, which lends the film a brutal authenticity similar - and more exploitative - movies lack.

Attenborough is magnificent in the unsavory role. Donning a prosthetic bald skull (Christie had an enlarged head) and replicating Christie's quiet vocal tones (supposedly a result of being gassed during service in World War I), Attenborough fully inhabits the psychopathic killer whose kindly, timid demeanor masked his violent tendencies and distasteful fetishes. Though best known for his roles in 'The Great Escape' and 'Jurassic Park,' and for directing the Oscar-winning 'Gandhi,' Attenborough paints arguably his most vivid character portrait here, making an indelible impression in a completely unsympathetic part.

And yet somehow the young Hurt eclipses him. In a performance of astonishing emotional intensity, Hurt brings Timothy Evans to brilliant life, embracing every facet of his personality, from the blustery braggart and bullying husband to the doting father and insecure simpleton. His raw, unbridled grief over his wife's death is a sight to behold, as is his dazed acceptance of Christie's manipulations and growing realization that the man he so implicitly trusted has cruelly betrayed him. Hurt has filed many riveting performances throughout his long and fruitful career, but this one ranks among his very best.

There's nothing cheap or crude about '10 Rillington Place,' despite its chilling subject matter. Fleischer's semi-documentary approach elevates the material, but doesn't make it any easier to digest. Though I appreciate the artistry and performances, I'm not sure I ever want to visit '10 Rillington Place' again. And that is probably the greatest compliment I can pay this hard-hitting, well-crafted examination of unvarnished evil. 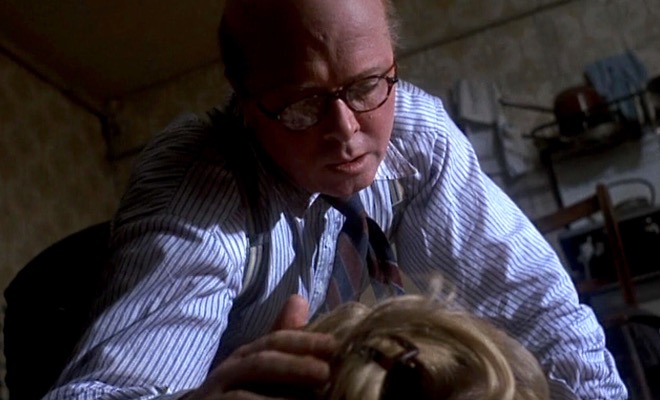 '10 Rillington Place' arrives on Blu-ray in a limited to 3,000 edition packaged in a standard case. An eight-page booklet featuring an essay by Twilight Time staffer Julie Kirgo, selected scene shots, and a reproduction of the movie's poster art is tucked inside the front cover. Video codec is 1080p/AVC MPEG-4 and audio is DTS-HD Master Audio 1.0. Once the disc is inserted into the player, the static menu without music immediately pops up; no previews or promos precede it.

The vivid and vibrant 1080p/AVC MPEG-4 transfer adds surprising luster to this dark, unsettling tale. Light grain supplies vital texture that enhances the ramshackle look of the dingy interiors, while excellent clarity and contrast immerse us in the creepy goings-on. Splashes of lush color perk up the predominantly bland palette (especially the verdant Welsh exteriors), and excellent shadow delineation complements the deep black levels, keeping details crisp even during low-lit scenes. Close-ups are sharp, highlighting the sweat, tears, stress, and anguish often shading the characters' faces, and only a few stray nicks and marks dot the pristine source material. No crush, banding, or other digital anomalies intrude either. This is another stellar Twilight Time transfer that brings this unsavory story closer to home than any of us might like.

From the opening frames, the DTS-HD Master Audio 1.0 track puts us in the thick of the action, and it doesn't loosen its grip for the rest of the film. Music is sparingly employed, but John Dankworth's score is distinguished by superior fidelity, weighty bass accents, an expansive front channel feel, and plenty of tonal depth. Sonic accents, such as footsteps crunching against the pavement, creaky floorboards, and train whistles are crisp and distinct, and all the dialogue - even when spoken barely above a whisper - is crystal clear and easy to comprehend. No hiss, pops, or crackles break the hypnotic spell, and a wide dynamic scale keeps distortion at bay. Much of the movie's effectiveness stems from its eerie quiet, but this high-quality track nicely renders the sounds we do hear, enhancing the menacing mood.

Just a couple of supplements round out this catalogue release.

Uncomfortably eerie, often shocking, and devastatingly sad, '10 Rillington Place' wields more impact than other grisly thrillers because it's true. Director Richard Fleischer's stark, chilling profile of John Christie, one of England's most notorious serial killers, pulls no punches as it profiles a manipulative psychopath and his violent, sexually deviant proclivities. It's also an indictment of both the justice system and capital punishment, and features exceptional performances from Richard Attenborough, John Hurt, and Judy Geeson. Twilight Time's limited edition Blu-ray presentation may be light on supplements, but the high-quality video and audio transfers honor this disturbing film, which is often tough to watch, but easy to recommend.