The World, the Flesh, and the Devil

With its desolate view of a post-apocalyptic New York City, The World, the Flesh and the Devil eerily reflects the current Big Apple landscape, but the story of how three disparate survivors of a mysterious noxious attack learn to coexist amid the carnage never maximizes its promising premise. A solid video transfer and top-notch audio track beef up Warner Archive's barebones Blu-ray presentation of this 1950s doomsday classic, which is definitely worth a look during these trying, unsettling times.

What a difference a month makes. If I had reviewed The World, the Flesh and the Devil 30 days ago, I probably would have called its stark, eerie depiction of a desolate New York City after a noxious gas wipes out its population a wildly improbable sci-fi vision of the apocalypse. I would have remarked on the stunning visuals and praised the level of realism the filmmakers achieved while pointing out the plot's deficiencies and pigeonholing the movie as a quaint relic of a bygone doomsday genre. I mean, really, the idea of a totally deserted New York is probably the most preposterous thing imaginable, right?

If only. Looking at writer-director Ranald MacDougall's futuristic film through the prism of our current global pandemic doesn't mask its shortcomings, but instead of striking us as odd, fantastic, and stunning, the images presented look disturbingly and dishearteningly familiar. These days, you can't turn on the TV without seeing what used to be a teeming Times Square and bustling Fifth Avenue devoid of human activity. So quite unbelievably, it doesn't seem so bizarre to watch Harry Belafonte, Inger Stevens, and Mel Ferrer roam the Big Apple's abandoned streets amid vacant shops, restaurants, and office buildings. It's practically what we're living through today. 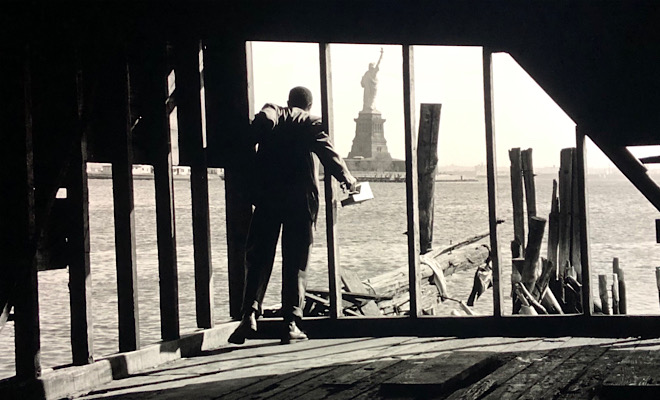 When The World, the Flesh and the Devil premiered in 1959, it joined a wave of similar cautionary films that depicted the ravages of nuclear war and subsequent near-extinction of humanity. While it espouses a more hopeful message than On the Beach, the script lacks the gravity and emotion necessary to lend the movie resonance. The dynamite premise ignites the senses, but after the novelty wears off, the aimless story flounders as it limps toward a melodramatic climax.

As he toils in a central Pennsylvania coal mine, Ralph Burton (Belafonte) weathers a massive above-ground explosion that causes the tunnels around him to collapse. Rescue attempts ultimately fail, forcing Ralph to extricate himself from the rubble. When he emerges, he finds a devastated world devoid of humanity. Shocked and confused, he hot-wires a car and drives to New York City, where he hopes to find other survivors...to no avail.

The resourceful Ralph forges a life for himself, but the constant desolation begins to torture his psyche. Just before he cracks, he encounters Sarah Crandall (Stevens), and the two form an alliance that evolves into an attraction. Ralph, however, can't shake the stigma of racial intolerance that permeated society before the holocaust, and even though no one else is around to judge or thwart his burgeoning love for Sarah, Ralph pulls back. That's when the ailing Ben Thacker (Ferrer) arrives on the scene. A combustible triangle quickly develops after his recovery, and soon begs the question: Will the last three people on Earth bond together or let their petty rivalries and emotional angst annihilate the human race? 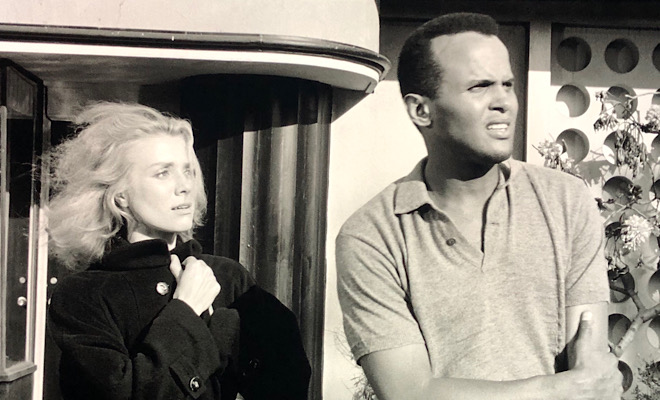 Unfortunately, what sounds titillating on paper doesn't translate as well as it should to the screen. Though MacDougall made his name as a writer, nabbing an Oscar nomination for his Mildred Pierce screenplay and also penning such searing dramas as Possessed and The Breaking Point, his direction here outclasses his script. MacDougall maximizes the barren cityscape's impact, crafting a creepy, other-worldly atmosphere that consistently overshadows the narrative and dwarfs the trio of actors in its grip. With apologies to Casablanca, the problems of these three little people don't amount to a hill of beans in this crazy world, which consistently eclipses them. Even the provocative themes simmering beneath the surface fail to rise to the full boil necessary to produce a thought-provoking motion picture.

Belafonte files a spirited portrayal and even gets a chance to warble a tune or two. 1959 would prove to be a banner year for the singer-actor, who would also appear in the tense heist flick Odds Against Tomorrow with Robert Ryan, Gloria Grahame, and Shelley Winters. He creates potent chemistry with the charming, beautiful Stevens, who's best known for playing the title role in the 1960s TV sitcom The Farmer's Daughter, and makes a fine adversary for the suave Ferrer, who doesn't appear until about halfway through, but nevertheless makes a strong impression.

It's amazing how some of the most fantastical aspects of sci-fi movies have a way of coming true. Who ever would have dreamed the day would come when we'd see deserted streets in New York City? Luckily, our current situation isn't quite as dire as the one the characters face in The World, the Flesh and the Devil, but this intriguing, occasionally arresting doomsday drama reminds us of the fragile, unpredictable nature of the world in which we live, and that anything - good and bad - is possible. It's not a great film, but right now, in this turbulent, uncertain moment, it hits home. 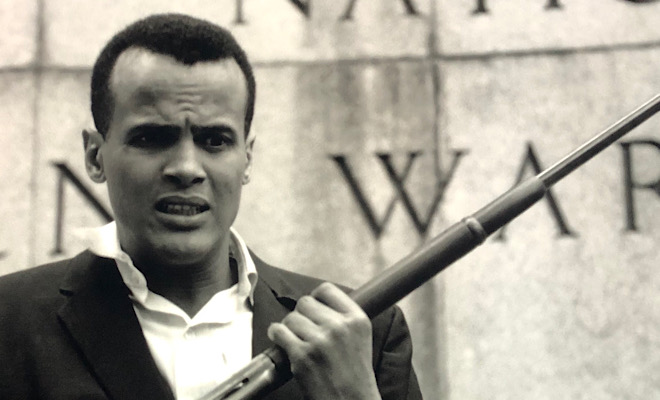 The World, the Flesh and the Devil arrives on Blu-ray packaged in a standard case. Video codec is 1080p/AVC MPEG-4 and audio is DTS-HD Master Audio 2.0 stereo. Once the disc is inserted into the player, the static menu with music immediately pops up; no previews or promos precede it.

The barren New York cityscapes look terrific in HD, as do the film's three attractive stars, thanks to Warner Archive's high-quality 1080p/AVC MPEG-4 transfer. Superior contrast, clarity, and grayscale along with rich black levels, bright whites, and excellent shadow delineation produce a well-balanced picture with a palpable film-like feel. Although grain fluctuations and brief episodes of softness occasionally occur, the CinemaScope rendering remains fluid and pleasing throughout. Background elements are easy to discern, costume textures come through nicely, and close-ups showcase fine facial features well. No crush creeps into the image, and no nicks, marks, lines, or scratches mar the pristine source material. Though I haven't seen the previous DVD edition of the film, it's impossible to imagine The World, the Flesh and the Devil looking any better than it does here.

Although the packaging lists the audio as mono, the included soundtrack definitely outputs stereo sound, which greatly enhances the film. The DTS-HD MA 2.0 track exudes an expansive feel that suits both the CinemaScope format and Miklos Rosza's often booming score. A wide dynamic scale handles all the highs and lows without a hint of distortion, while solid bass frequencies supply potent rumbles from time to time. Ambient effects like dripping water, blowing leaves, gusts of wind, and footsteps crunching against the pavement are marvelously crisp, and more bombastic sonic accents like gunshots and church bells make notable impressions. All the dialogue is clear and easy to comprehend, and no age-related hiss, pops, or crackle disrupt the eerie mood. An audio track rarely eclipses a video transfer for a film of this vintage, but this track is so lively and vibrant, it slightly bests the disc's visuals.

The film's original theatrical trailer, which includes a shot not seen in the finished movie, is the disc's sole supplement.

Although The World, the Flesh and the Devil doesn't predict our current situation, it eerily reflects some of what we're going through right now. The post-apocalyptic drama about a trio of survivors struggling to coexist and manage their fears, desires, and insecurities in a desolate New York City boasts stunning visuals and creepy atmospherics, but its meandering, silly story ultimately sucks the air out of the movie. Warner Archive's Blu-ray presentation is pretty bare bones, but it features a solid video transfer and exceptional audio track. In these strange times, The World, the Flesh and the Devil doesn't seem all that strange after all, which makes this eerily topical classic worth a look while you're sheltering in place.