Three brothers, one mystery, and a whole lotta action make Beau Geste one of the most exciting and entertaining adventure films of the 1930s. Gary Cooper, Ray Milland, and Robert Preston star as three devoted brothers who join the French Foreign Legion and find themselves in a desperate situation deep in the African desert. Brian Donlevy steals the show as a sadistic commanding officer and a young Susan Hayward lights up the screen in a brief role. A brand new 4K master bolsters Kino's Blu-ray presentation, along with strong audio and a lively commentary track. This is the best of many versions of Beau Geste and the best home video edition of this beloved film. Highly Recommended.

Another shining production from Hollywood's most magical year, Beau Geste remains a timeless 1939 adventure yarn packed with all the popcorn elements that define the genre - action, mystery, romance, camaraderie, and a host of colorful characters. Veteran director William "Wild Bill" Wellman (Wings, The Public Enemy) masterfully mixes all the ingredients into a spirited, endlessly entertaining epic that stands as the finest adaptation of Percival Christopher Wren's classic, oft-filmed novel. Superior production values, a lively script, and terrific cast distinguish the movie, but it's Wellman's rousing yet reverent presentation that makes this Beau Geste the best Beau Geste.

Told in a very effective flashback, the story chronicles the exploits of the three Geste brothers - Beau (Gary Cooper), Digby (Robert Preston), and John (Ray Milland) - all of whom join the French Foreign Legion after the mysterious theft of the family's prized jewel and last valuable asset, the "Blue Water" sapphire. Before departing, both Beau and Digby leave behind confessions to the crime, which becomes a central facet of the tale.

As Legionnaire recruits deep in the Sahara Desert, the brothers and their comrades are bullied by Sergeant Markoff (Brian Donlevy), their sadistic trainer, and after the company commander succumbs to a fever, Markoff takes charge of the outfit and amps up his reign of terror. The beleaguered men plot a mutiny, but before they can execute it, enemy Arabs repeatedly attack their fort, with the resulting carnage setting in motion a string of dramatic events that puts the brothers in jeopardy and eventually solves the missing sapphire mystery. 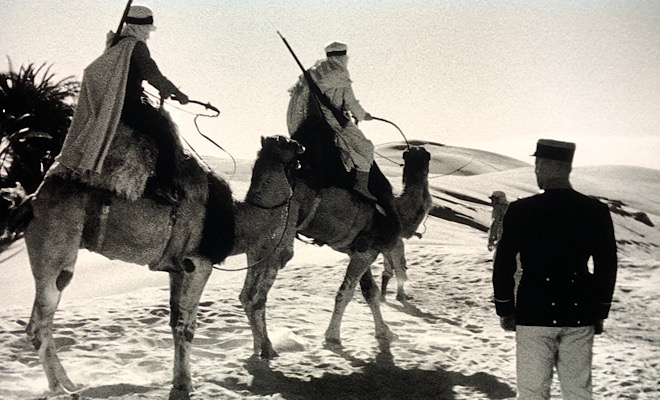 Devotion, honor, nobility, and the unbreakable bonds of brotherhood are the major themes swirling about Beau Geste, but screenwriter Robert Carson (who won an Oscar two years earlier for his script for the original version of A Star Is Born, also directed by Wellman) doesn't allow them to bog down the narrative. A light touch prevails, with plenty of tongue-in-cheek humor and old-fashioned matinee thrills peppering the drama. There's some gore and pathos, too, as well as several impressively staged battle sequences, all of which keep us emotionally and visually engaged from beginning to end.

Extensive location shooting in Yuma, Arizona makes us feel like we're in the middle of the Sahara, and cinematographers Theodor Sparkuhl and Archie Stout maximize the impact of the desolate, arid area, crafting several striking, artistic images that elevate the movie. While Wellman captures the romantic allure of the French Foreign Legion during the scenes focusing on the Geste brothers as young boys (one of whom is portrayed by a 15-year-old Donald O'Connor), he incisively juxtaposes its brutal reality with some surprisingly graphic shots of dead soldiers. As 1939 Europe was gearing up for another devastating global conflict, Wellman paints a sobering portrait of the futility and devastation of war within the confines of the action format.

Cooper, Milland, and Preston project plenty of charm, swagger, and agility, and create a tight ensemble. Though they don't particularly look alike, their fraternal ribbing and obvious concern and love for each other makes them believable as brothers. In only her second movie as a billed performer, Hayward isn't given much to do, but her fresh-faced beauty, confident presence, and dulcet speaking voice make it clear she's going places fast. And in only his sixth movie, 28-year-old Broderick Crawford (was Broderick Crawford ever 28??!!) makes a notable impression as a blustery Legionnaire. 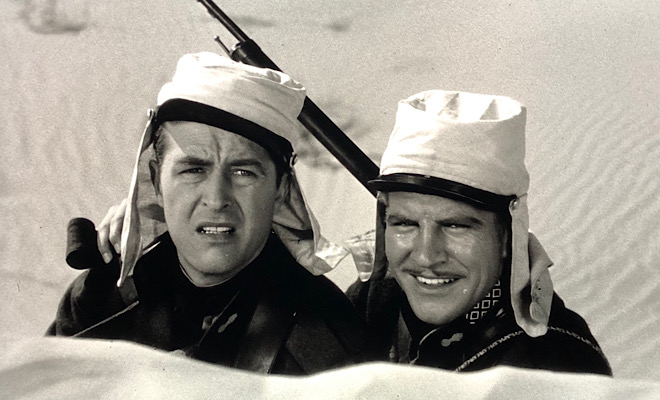 Donlevy, though, outshines them all, earning a well-deserved Best Supporting Actor Oscar nomination for his magnetic portrayal. The vicious, dictatorial Markoff is one of those classic movie villains we love to hate, and Donlevy makes the most of every sneer, growl, and steely-eyed glare. Some actors might go overboard and make Markoff a caricature, but Donlevy resists the temptation, filing a colorful yet finely tuned performance that lends essential dimension to a despicable figure. I've seen a great deal of Donlevy recently in Destry Rides Again, The Great Man's Lady, and The Great McGinty, and come to highly respect this often overlooked second-tier star who brightened scads of movies during Hollywood's Golden Age. Beau Geste marks his only Oscar-nominated turn, and though he lost to Thomas Mitchell in Stagecoach, his work here is worthy of the prize.

Beau Geste may lack substance, but it's really what the movies are all about. This highly entertaining film takes us to an exotic land, immerses us in conflict, features noble heroes and dastardly bad guys, thrills our senses with spirited action, tugs the heartstrings, teases our brains with an intriguing mystery, and tops everything off with a touch of romance. No wonder filmmakers kept coming back to this sweeping tale over and over again. Beau Geste really is irresistible, and no version is tougher to resist than Wellman's, which stands above the rest and remains just as much fun today as it surely was 80 years ago. 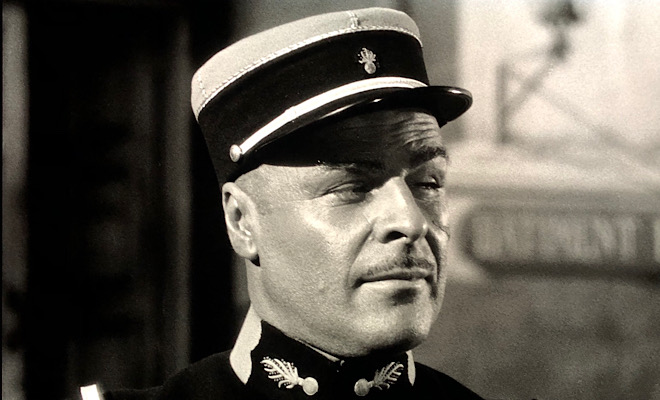 Beau Geste arrives on Blu-ray packaged in a standard case. Video codec is 1080p/AVC MPEG-4 and audio is DTS-HD Master Audio 2.0 mono. Once the disc is inserted into the player, the static menu with music immediately pops up; no previews or promos precede it.

A brand new 4K master helps Beau Geste charge onto Blu-ray looking better than ever. The 1080p/AVC MPEG-4 transfer features excellent clarity, contrast, and grayscale, along with a lovely grain structure that supplies essential grit to this outdoorsy action epic while preserving the look and feel of celluloid. Blacks are rich and deep, crisp whites lend marvelous definition to the desert sand dunes, and shadow delineation is quite good. Sharp close-ups nicely highlight sweat, facial hair, and the actors' ruddy, sun-baked skin, as well as the fresh-faced loveliness of a young Susan Hayward. The background details of the ornate family estate are easy to discern (the film received an Oscar nomination for Best Art Direction), costume fabrics exhibit a good amount of texture, and other than a fairly severe vertical line that assaults the print at the 36:00 mark and intermittently bisects the faces of Milland and Hayward for about 30 seconds, only a smattering of errant nicks, marks, and scratches dot the source material. If you're a Beau Geste fan, you will be thrilled with this remastered transfer, which renders every other home video version of the movie obsolete.

The DTS-HD Master Audio 2.0 mono track supplies clear, well-modulated sound that requires a bit of an extra volume boost to fully comprehend all the dialogue. At times, this is an active track, packed with a rousing, robust score by Alfred Newman, hundreds of rowdy extras, and several battle scenes, but the wide dynamic scale handles it all with ease. Excellent fidelity allows the audio to fill the room and all the elements are nicely prioritized for maximum enjoyment and effect. Any age-related hiss, pops, and crackle have been erased, leaving a clean track that shows off this classic to its best advantage.

In addition to a re-release trailer for Beau Geste and a bunch of previews for other Kino classic releases starring Cooper, Milland, Preston, Donlevy, and Hayward, as well as a couple directed by Wellman, the only supplement is an audio commentary with William Wellman Jr., son of the director, and film historian Frank Thompson, who's a self-professed Beau Geste fanatic and author of two books on Wellman. (Wellman, Jr. has also written two books about his father.) The two make a great team, and this is a terrific commentary packed with plenty of fascinating information. The duo covers filming techniques and locations, alternate casting choices, deleted material, production delays due to weather and health issues, and other versions of Beau Geste. They also share personal anecdotes about the film's stars and a wealth of detailed trivia. If you think you know this film, you'll discover there's still a lot to learn after listening to this absorbing and enlightening track.

One of the Golden Age's most beloved adventure sagas, Beau Geste makes its long-awaited Blu-ray debut with a new 4K master that puts plenty of spring in this rousing classic's step. As three brothers who join the French Foreign Legion and must defend a remote desert outpost, Gary Cooper, Ray Milland, and Robert Preston ignite the screen, while Brian Donlevy and a very young Susan Hayward provide terrific support. Packed with action from beginning to end and featuring an involving - if preposterous - mystery subplot, Beau Geste is a highly entertaining epic that's just as fresh today as it was 80 years ago. Top-notch video and audio transfers and a great commentary track distinguish Kino's Blu-ray release, which is well worth the upgrade and comes highly recommended.