The Great McGinty marks the directorial debut of the great Preston Sturges, and this blistering political satire peppered with sharp comic overtones remains one of the gifted writer's most relevant and under-appreciated works. The tale of a skid row bum's unexpected and oh-so-shady rise to political prominence is funny, smart, and surprisingly timeless, and Kino celebrates it with a brand new 4K remaster and solid audio. You may not have heard of The Great McGinty, but now more than ever, you need to see it. Highly recommended.

With all the D.C. drama consuming our country right now, we could certainly use a good political comedy. Well, coming to the rescue just in the nick of time is The Great McGinty, a gem of a satire from madcap maestro Preston Sturges. With his acerbic wit, keen insight into the human condition, and glorious sense of the absurd, the esteemed writer-director delightfully skewers political corruption in this breezy, clever, and deceptively substantive farce that stands as one of the most auspicious directorial debuts in Hollywood history.

You may not be familiar with The Great McGinty - or may have dismissed it - because it doesn't boast any big stars or possess the same cachet as such standout Sturges pictures as The Lady Eve, Sullivan's Travels, The Palm Beach Story, or The Miracle of Morgan's Creek. Put me in the ignorant fool category, because as much as I admire Sturges' work, the film's B-list cast consistently dulled my enthusiasm and kept me from checking out The Great McGinty for far too long. Well, shame on me! (And shame on you if you make the same mistake.) Almost instantly, this classic comedy captivates with its incisive satire, clever plot, and superior performances. The movie zips along at a breakneck clip, deftly mixing high and lowbrow humor with sober social themes to create a thoroughly satisfying, often inspired tale. It's no wonder The Great McGinty landed on the New York Times' 10-best list and earned Sturges a well-deserved Best Original Screenplay Oscar.

A fictional no-name city that looks an awful lot like Chicago is the setting for this tongue-in-cheek, Depression-era story of voter fraud, racketeering, and campaign skullduggery. It's election night, and Dan McGinty (Brian Donlevy), a down-and-out bum on a bread line, is offered $2 if he'll show up at the polls and vote for the incumbent mayor under an assumed name. Desperate for a quick buck, Dan obliges...and obliges...and obliges. He ends up voting 37 times(!) with 37 different names at various polling places. Not only does he earn $74, he also gets a life-changing meeting with the victorious party boss (Akim Tamiroff) who thinks the unscrupulous Dan has a future in corruption...er, I mean politics. 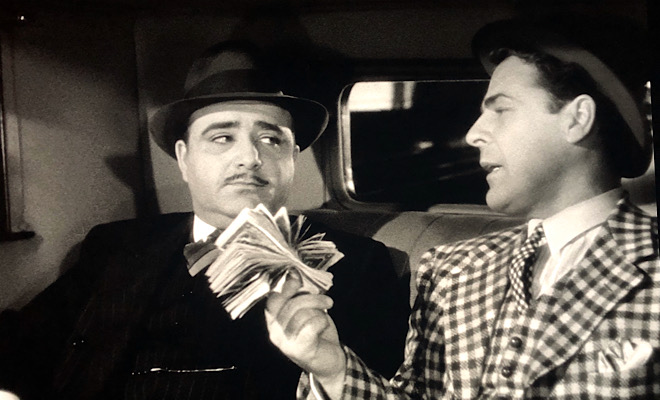 Dan begins his apprenticeship in "collections," and he's so successful shaking down disreputable local businesses, The Boss gets him installed as an alderman in City Hall, where Dan thrives on kickbacks and dirty deals. The next logical step? A run for mayor, ironically under the "Reform Party" banner. Dan is reluctant at first, but soon goes all in. ("No man is strong enough to buck the party," he says with a smirk, a statement that's truer today than it was back then.) To heighten his appeal and legitimize his candidacy, he proposes a marriage of convenience to his smitten secretary Catherine (Muriel Angelus), a divorcée with two young children. She accepts, he gets an instant, picture-perfect family that helps him handily win his mayoral race, and before anyone can say Rod Blagojevich, The Boss begins mounting Dan's campaign for governor.

The Reform Party may be a joke, but Catherine, who champions social causes, vows to reform her crooked husband and inspire him to work for the common good. The question is, can a leopard change its spots? And what might be the consequences if it does? Oddly enough - and this is pure Sturges - Dan's snap decision to go straight turns his even-keel life upside down and gets him into more trouble than any of his illegal deeds ever did.

It's hard to believe, but The Great McGinty marked the first time a studio allowed a writer to direct his own script. What's now a common practice might never have come to pass were it not for an audacious move by Sturges, who was so desperate to protect the integrity of his work and present his stories the way he envisioned them, he offered to sell his Great McGinty script to Paramount for just $10 if he could direct the picture himself. The studio couldn't resist such a sweet deal, but Paramount bigwigs were so sure the inexperienced Sturges would fail, they saddled the film with a shoestring budget and forbade the use of any big-name stars. Sturges didn't bat an eye...and had the last laugh. The Great McGinty exceeded expectations, launched his legendary career, and thus paved the way for future writer-directors like Orson Welles, Billy Wilder, and Joseph L. Mankiewicz. 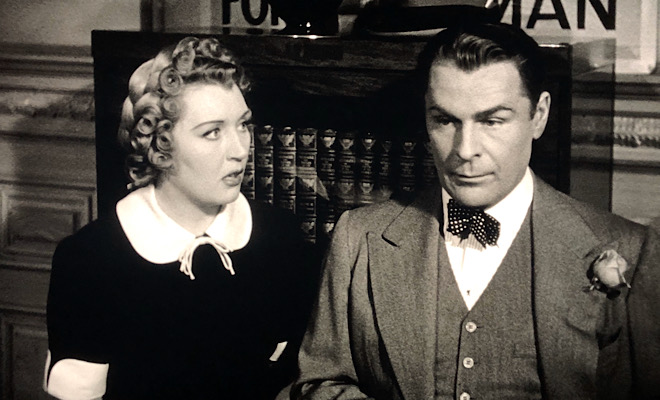 Slick and streamlined, The Great McGinty doesn't look like the work of a first-time director. Its assured, at times creative, and always engaging style reflects a far more seasoned professional. Writing jokes on the page and making them come to life on the screen are two different things, but Sturges proves here he has the talent to do both. He also coaxes marvelous performances from his cast. The rugged, macho Donlevy may be all but forgotten today, but was once one of Hollywood's most prolific and reliable actors. Throughout his long career (he made more than 100 movies), he specialized in both nefarious and heroic rascals, so was a perfect choice to play the cocky, brash, yet utterly charming McGinty. Any doubts about his ability to carry the film instantly vanish, and his self-assured, energetic performance rivets attention throughout. Whether he's brawling with The Boss or cuddling with his sleepy step-kids while reading them a bedtime story, Donlevy always seems both at ease and in full command of his colorful, dimensional role.

I must sheepishly admit I'd never heard of Muriel Angelus before watching The Great McGinty, and I'm ashamed to say I expected a bland portrayal as a result. Well, just as little-known Ellen Drew surprised me in Sturges' Christmas in July (made later the same year), Angelus completely bowled me over here. Her part isn't showy, but the British actress projects a winning sincerity and beguiling naturalness that quickly connect us to her forthright character. Her poise and grace beautifully temper Donlevy's bombastic bluster and make us rue the fact she never made another movie after The Great McGinty.

Known for his impeccable casting instincts and bringing out the best in unheralded performers, Sturges also cultivated a faithful stock company of supporting actors who would grace many of his movies going forward. After The Great McGinty, the always amusing WIlliam Demarest would appear in seven other Sturges films, as would Arthur Hoyt and Jimmy Conlin. Harry Rosenthal, who barely utters a word in The Great McGinty, but earns some of the biggest laughs (watch him throw rice at Dan and Catherine after their wedding), would enliven six. Dewey Robinson would make five more appearances, Louis Jean Heydt would make three, and Frank Moran would be cast a whopping eight times in subsequent Sturges films.

Politics - especially dirty politics - hasn't changed much over the years, which is why The Great McGinty is still such a hoot today. The film may not appear on many must-see classics lists, but now more than ever this rollicking Sturges romp deserves a fresh look. It's funny, smart, topical, well-made, well-acted... In short, The Great McGinty is damn near unimpeachable. 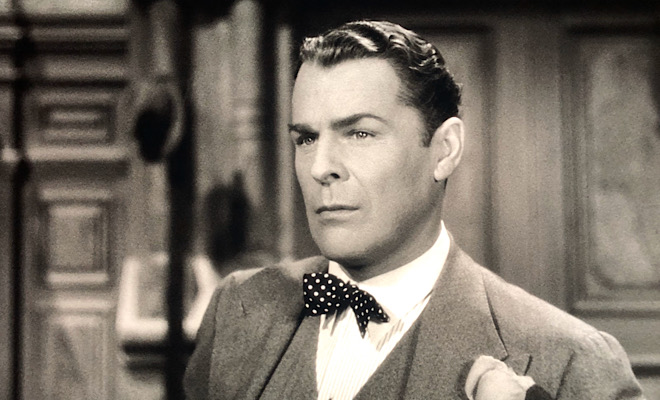 The Great McGinty arrives on Blu-ray packaged in a standard case. Video codec is 1080p/AVC MPEG-4 and audio is DTS-HD Master Audio 2.0 mono. Once the disc is inserted into the player, the static menu with music immediately pops up; no previews or promos precede it.

A brand new 4K master is the source for Kino's terrific 1080p/AVC MPEG-4 transfer, which is a joy to watch from start to finish. Excellent contrast, clarity, and gray level variance produce a vibrant, detailed image, while a natural grain structure maintains the feel of celluloid. Some shots exhibit more grain than others (they might have been culled from a different source), but the deviations are brief and forgivable, considering the film's age. Black levels are rich and deep, whites are balanced, shadow delineation is strong, garish patterns remain stable, and close-ups render fine facial features well. A smattering of faint print damage remains, but unless you have an eagle eye it doesn't interfere in the slightest with the enjoyment of this incisive comedy.

The DTS-HD Master Audio 2.0 mono track supplies clear, well-modulated sound. Excellent fidelity and tonal depth allow Frederick Hollander's music score to fill the room with ease, and a wide dynamic scale handles all its highs and lows without any distortion. All the dialogue is clear and comprehendible, and sonic accents like gunfire and shattering bric-a-brac are crisp and distinct. Best of all, no age-related hiss, pops, or crackle intrude. For an 80-year-old film, The Great McGinty sounds mighty fine.

Aside from the film's original theatrical trailer and a few previews for other Preston Sturges movies, the only extra is an audio commentary by film historian Samm Deighan. Deighan's commentaries are always well-researched, insightful, and a pleasure to listen to. She knows her stuff, and her reverence for classic film heightens the appeal of her discussions. If you like The Great McGinty, you'll appreciate hearing Deighan's analysis of the film.

Snappy, rollicking, and sharp as a tack, The Great McGinty brilliantly lampoons political corruption and remains just as relevant today as it surely was 80 years ago. This milestone film, which marks the first time a screenwriter ever directed his own work, stands as a notable achievement for Preston Sturges, who would go on to craft some of the most hilarious, inspired, and substantive social comedies in Hollywood history. Kino honors this classic with a top-flight transfer struck from a brand new 4K master that will preserve The Great McGinty for generations to come. Extras may be slim, but the entertainment value of this smart, captivating satire is as fat as a politician's coffers. Highly recommended.

Sale Price 17.29
List Price 29.95
Buy Now
3rd Party 16.72
In Stock.
See what people are saying about this story or others
See Comments in Forum
Previous Next
Pre-Orders
Tomorrow's latest releases