Who doesn't love Barbara Stanwyck? And once you sink your teeth into Kino's three-film Barbara Stanwyck Collection, you'll not only love her even more, you'll also gain renewed appreciation for her talent, versatility, and star quality. Though the trio of included movies - Internes Can't Take Money (1937), The Great Man's Lady (1942), and The Bride Wore Boots (1946) - don't rank among Stanwyck's best-known features, they're all stellar productions that beautifully showcase their leading lady and deserve to be rediscovered. A contemporary drama, period western, and romantic comedy comprise the collection and give Stanwyck the chance to shine in a variety of genres. Supplements are thin, but first-rate video and audio transfers distinguish each disc and enhance our enjoyment of each film. Whether you're a seasoned Stanwyck fanatic or a wide-eyed newbie, this wonderful collection provides a much-needed Stanwyck fix for classic movie junkies. Highly Recommended.

Barbara Stanwyck could do it all. Over the course of her legendary multi-decade career, she appeared in romantic dramas, screwball comedies, westerns, film noirs, period pieces, and thrillers, and seemed perfectly at ease in all of them. (The only genre she really eschewed was musicals, although she did sing a song on screen in Lady of Burlesque in 1943.) Sometimes the scripts would let her down and sometimes her directors would drop the ball, but Stanwyck always managed to rise above any artistic deficiencies and deliver a stellar performance.

Full disclosure... Stanwyck is one of my favorite Golden Age actresses. I've seen dozens of her films over the years, but somehow have missed the trio of movies included in Kino's new Barbara Stanwyck Collection. They're hardly flagship titles, but that's exactly what makes this set so special. All three films are new to Blu-ray, they all look great, and each one reminds us just how captivating, versatile, talented, and - most of all - authentic Stanwyck was...and still is. If you love this lady like I do, you'll be eager to get your hands on this release.

Do the films rank among her best? No (although one could make an argument for The Great Man's Lady), but they're solid entries that wonderfully showcase Stanwyck and deserve the high-def treatment they're receiving. I thoroughly enjoyed each of them and am certain even the most casual Stanwyck fan will too. 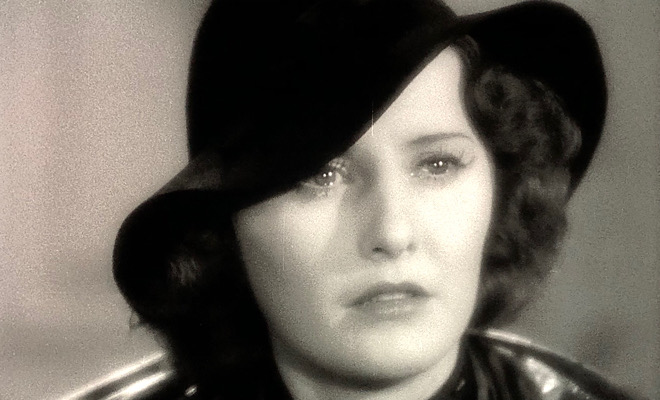 The same year Stanwyck would make the classic tearjerker Stella Dallas (a film that's long overdue for a Blu-ray release) and receive the first of her four Best Actress Oscar nominations, she starred in the first movie to feature one of Hollywood's best-known physicians, Dr. Kildare. Don't let the bland title fool you... Internes Can't Take Money is a snappy, exciting, and surprisingly emotional 79-minute drama that pairs Stanwyck with actor Joel McCrea. (This would be the third of six pictures they would make together between 1934 and 1957.)

Under the efficient and often arresting direction of Alfred Santell, Stanwyck plays Janet Haley, a woman who spent time in prison for refusing to rat on her bank robber ex-husband and is now desperately trying to find her three-year-old daughter who was sent to an orphanage when she was sent up the river. She visits rising intern James Kildare (McCrea) to treat a work-related injury and quckly strikes his fancy. Though Janet also becomes attracted to Dr. Kildare, she has more pressing things on her mind than love, namely scrounging up a thousand bucks so she can pay a local mobster to track down her kid.

Kildare plays a vital role in the drama, but the film really centers around Janet, and that gives Stanwyck plenty of opportunities to express the kind of selfless, heartbreaking mother-love that would distinguish her performance in Stella Dallas. Stanwyck brings natural intensity and conviction to every role, and here her raw emotional displays penetrate the soul. Internes Can't Take Money flaunts a gritty feel (MGM would soft-pedal the franchise after taking it over the following year and putting Lew Ayres in the Kildare role) and a lot of that is due to Stanwyck's terrific portrayal, which elevates the film far above the garden-variety medical drama. Rating: 4 stars 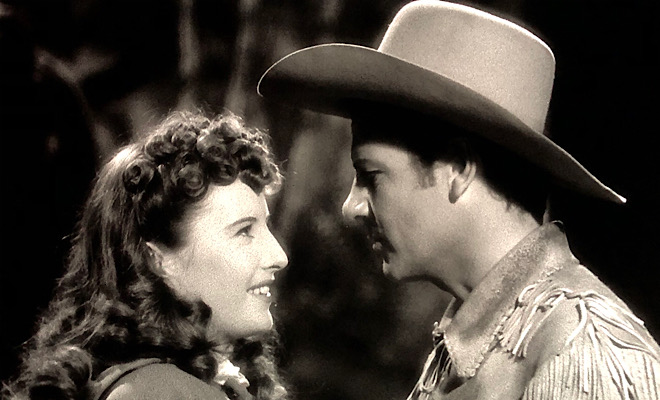 Stanwyck would team up again with McCrea and file a highly underrated, Oscar-worthy performance in this finely crafted and engrossing period film from top-notch director William A. Wellman. The Great Man's Lady won't score many points with feminists, as it chronicles the enormous sacrifices one woman makes so her husband can pursue his dreams and achieve success beyond anyone's wildest imagination, but it does give Stanwyck the kind of meaty, transformational part that today would earn most actresses an Academy Award.

Amazingly, Stanwyck - who ages from 16 to 109(!) over the course of the film - wasn't even nominated for her portrayal of Hannah Sempler, a gutsy, independent-minded, steadfastly devoted woman who marries dashing visionary Ethan Hoyt (McCrea) in 1848 and accompanies him on an arduous western odyssey filled with hardship and heartache. In a beautifully modulated, understated performance, Stanwyck impresses at every stage, but never more than as the reclusive 109-year-old survivor who shares her story with a young biographer (Katharine Stevens). Practically unrecognizable under layers of realistic makeup, Stanwyck disappears inside the mysterious old woman, lending resonance and grace to a sweeping tale.

The Great Man's Lady would mark the fourth film Wellman and Stanwyck made together (the two would collaborate a final time on the following year's Lady of Burlesque) and his customary verve, efficiency, and ability to maximize the emotional impact of small moments distinguish the movie. Wellman, who's best known for directing The Public Enemy, the first version of A Star Is Born, and The Ox-Bow Incident, covers a lot of ground over the course of 90 minutes, yet the pacing never seems rushed. He also coaxes fine work from McCrea and especially Brian Donlevy, who makes a strong impression as a charming gambler with whom Hannah develops an intimate friendship.

Though it often flies under the radar in discussions of her career, The Great Man's Lady stands as one of the finest examples of both Stanwyck's talent and tremendous commitment to her craft, and it deserves to be rediscovered and properly revered. Rating: 4-1/2 stars 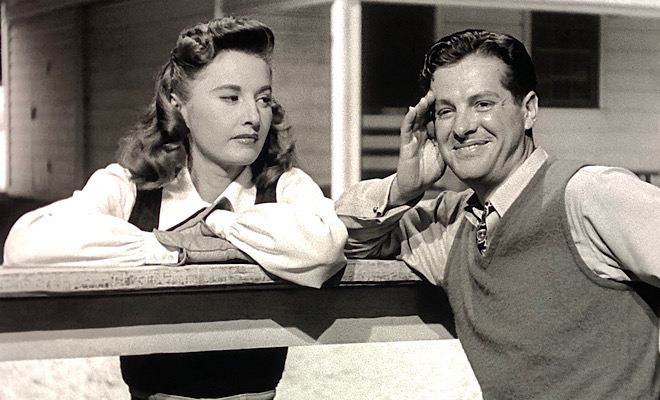 Despite Stanwyck's reputation as an intense dramatic actress, some of her most memorable portrayals are in comedies. She earned a well-deserved Oscar nomination for Ball of Fire and gIves an equally captivating performance in Preston Sturges' The Lady Eve. While The Bride Wore Boots can't compare to either of those films, it provides Stanwyck with a breezy, carefree vehicle to showcase her comic gifts.

Sally Warren (Stanwyck) loves horses almost as much as she loves her husband Jeff (Robert Cummings), a Civil War scholar who can't abide the four-legged animals his heroes rode into battle. As a result, Jeff is more than a little jealous of Sally's strapping riding companion Lance Gale (Patric Knowles), and she becomes quite annoyed by a flirtatious fan (Diana Lynn) who unceasingly tries to ingratiate herself into Jeff's work...and arms. Plenty of bickering, misunderstandings, and a requisite trip to divorce court ensue as the Warrens juggle break-ups and make-ups.

Directed by Irving Pichel without any distinguishing flair, The Bride Wore Boots is one of those innocuous, predictable, ultra-light, yet thoroughly enjoyable romantic comedies that contains a few laugh-out-loud moments and sails blissfully along on the strength of its attractive stars' charm and personality. The film marks the penultimate appearance of lovable, acid-tongued Robert Benchley (who would die before the movie was released), features a rare screen appearance by Peggy Wood two decades before she would memorably sing "Climb Ev'ry Mountain" in The Sound of Music, and spotlights a pre-Miracle on 34th Street Natalie Wood. The Bride Wore Boots may be the weakest movie in this collection, but it's still an entertaining romp worthy of a spin. Rating: 3-1/2 stars 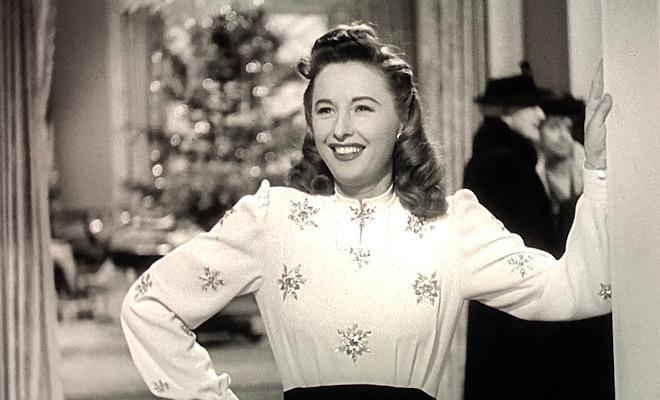 Barbara Stanwyck Collection arrives on Blu-ray in a box set with each movie housed in its own standard case. Video codec for all three films is 1080p/AVC MPEG-4 and audio is DTS-HD Master Audio mono. Once the discs are inserted into the player, their static menus with music immediately pop up; no previews or promos precede them.

Lovely transfers all around. While none of the films seem to have undergone any restorations before their release, Kino's 1080p/AVC MPEG-4 renderings of all three productions look so good, it makes me wonder if they have. Excellent clarity, contrast, and grayscale bring all three movies to life, and a natural grain structure preserves their film-like feel. Black levels are deep, good shadow delineation keeps crush at bay, background details are easy to discern, and close-ups are brilliantly sharp. Mild print damage occasionally crops up, but none of the nicks and scratches are distracting enough to spoil the presentation. The same is true of some intermittent image softness, which is a typical occurrence in films of this vintage that haven't undergone extensive remastering. None of the transfers in the collection are knockouts, but they all exceed expectations and make these treasured motion pictures look better than they ever have before.

All three films feature DTS-HD Master Audio mono tracks. The sound is largely free of any age-related hiss, pops, and crackle, and well-modulated, vibrant audio distinguishes each film's track. All the music scores fill the room with ease, sonic accents are crisp and distinct, and atmospherics like rain and chirping birds provide subtle aural shadings. Wide dynamic scales allow the audio plenty of room to breathe while keeping distortion at bay, silences are clean, and all the dialogue is clear and easy to comprehend. Considering the advanced age of these movies, the tracks more than meet expectations and complement the fine visuals well.

Sadly, there aren't many supplements included in this set. Interestingly, Kino usually packs a bunch of trailers on its discs, but even those are in short supply here.

Both Internes Can't Take Money and The Great Man's Lady feature excellent audio commentaries from film historian Dr. Eloise Ross, who provides cogent artistic and narrative analysis, production information, and some interesting trivial tidbits. Her lively delivery and infectious enthusiasm for both films draw us into her discussions and keep us engaged throughout.

Original theatrical trailers are also included for The Great Man's Lady and The Bride Wore Boots.

Barbara Stanwyck remains one of the most talented, versatile, and magnetic actresses ever to grace the silver screen, and Kino's Barbara Stanwyck Collection appropriately honors this beloved star with a trio of lesser known but first-rate titles. Internes Can't Take Money, The Great Man's Lady, and The Bride Wore Boots showcase different aspects of Stanwyck's persona, and when viewed together they create a colorful portrait of a unique performer and remind us what makes her so special. The three films come packaged in a nice box set and feature strong video and audio transfers. Supplements are thin, but that shouldn't steer anyone away from this wonderful assortment of rare films. Stanwyck fans will definitely want to grab this release, which comes highly recommended.