Christmas in July has nothing to do with Christmas, but this early screwball comedy from writer-director Preston Sturges makes some cogent points about the human condition that still ring true today. Dick Powell and Ellen Drew shine in this frenetic farce about a hoodwinked corporate clerk who hits a one-in-a-million jackpot...or does he? A brand new 4K master from Kino infuses this time-honored classic with new life and makes it a worthy addition to any Golden Age collection. Recommended.

First, let's get one thing straight. Christmas in July is not a Christmas movie. Oh yes, the script by screwball master Preston Sturges features a casual Christmas reference and one notable scene evokes plenty of holiday cheer (even though it takes place in the middle of summer), but this amiable 1940 comedy spends most of its time examining the human condition and the mercurial social, corporate, and economic influences that shape, bolster, and sabotage our fragile psyches. Though it's not one of Sturges' best known films, Christmas in July remains a jewel in the writer-director's cinematic crown, a small movie with a big heart and a lot to say within its modest framework.

Jimmy MacDonald (Dick Powell) dreams of making it big. Like many hard-working, restless Depression-era Americans, he's trapped in a dead-end, low-paying job and wonders if he'll ever have the means to marry his devoted girlfriend Betty (Ellen Drew) and support their respective long-suffering families. In an effort to get rich quick, Jimmy, who works as a clerk at a New York City coffee company, enters a contest sponsored by the firm's chief rival, Maxford House, which is looking for a new slogan to replace its time-honored catchphrase "grand to the last gulp" (an obvious take-off on Maxwell House's iconic "good to the last drop"). The first-prize payoff is $25,000 (equivalent to half-a-million bucks in today's currency) and Jimmy is convinced his slogan - "If you don't sleep at night, it isn't the coffee, it's the bunk" - is a guaranteed winner.

The jury at Maxford House, however, can't come to a unanimous decision, much to the exasperation of the company's president, Dr. Maxford (Raymond Walburn), who's counting on the contest's publicity to jumpstart sales. The irascible Mr. Bildocker (William Demarest) is the lone holdout, and his refusal to join the majority forces the winner's announcement to be delayed. That leaves a million entrants in agonizing limbo, but gives a few of Jimmy's mischievous coworkers an idea for a devilish practical joke. Tom (Adrian Morris), Dick (Rod Cameron), and Harry (Harry Rosenthal) manufacture a bogus telegram declaring Jimmy the winner, and the ensuing euphoria catches the attention of Jimmy's boss, who suddenly regards Jimmy as a boy-wonder visionary whose advertising acumen is a valuable company asset. 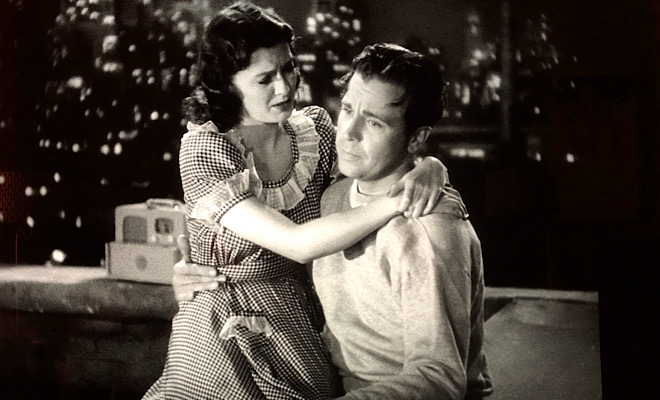 Jimmy gets an instant raise, his own office, and when he goes to claim his winnings, an oblivious Dr. Maxford is so eager to wash his hands of the blasted contest, he eagerly writes Jimmy a $25,000 check. Jimmy now has more than enough money to buy Betty an engagement ring and give his mother the convertible sofa she's always desired...but he doesn't stop there. Jimmy wants to share his newfound wealth, so he buys presents for everyone who lives on his tenement-lined Manhattan street. Of course, it's not long before Dr. Maxford discovers the contest isn't really over, which incites an apoplectic reaction and frantic rush to find and apprehend the benevolent and hopelessly hoodwinked Jimmy before he spends every last penny of his prize.

Christmas in July is a charming, uplifting film that benefits from a zippy script, spritely direction, and spirited performances, but it remains relevant because it perceptively zeroes in on a key human quality to which almost everyone can relate. Confidence is an essential element in all of our lives, and the lack of it can severely stymie our personal development and progress. Before he "wins" the $25,000 jackpot, Jimmy doubts his abilities, and his outlook on life is rather bleak. Yet after he receives that fateful - albeit phony - telegram, he feels validated. Suddenly, his boss believes in him, and that blind faith allows Jimmy to show off his talent and unleash the potential locked inside him.

The astute Sturges, though, also depicts how quickly the rug can be pulled out from under us. When Jimmy discovers he's been had, his ego crumbles, he becomes instantly insecure, and the boss who praised his genius just hours before now labels Jimmy's inspired ideas rotten. In Hollywood, so the saying goes, you're only as good as your last picture, and Sturges cleverly transfers that idea to the corporate world, where recognition - fairly or not - determines worth. 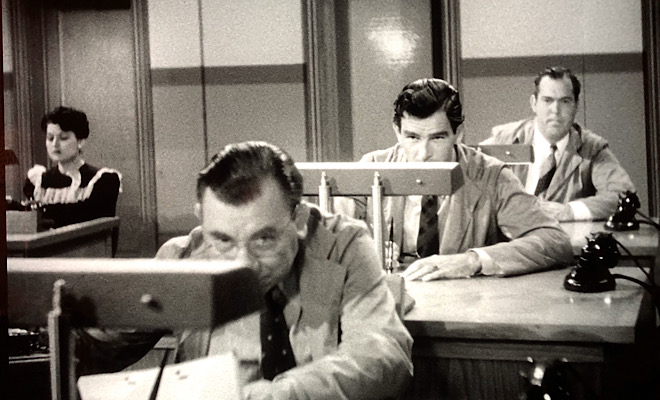 Sturges was the first Hollywood writer to get the green light to direct his own screenplays, paving the way for Billy Wilder to do the same a couple of years later. Christmas in July was only his second directorial effort, yet in a striking parallel to Jimmy MacDonald, the success and recognition he gained from The Great McGinty earlier in 1940 pumped up his confidence, which would soar through the roof the following year with the release of arguably his two finest films, The Lady Eve and Sullivan's Travels. At a mere 67 minutes, Christmas in July is far more modest in scale and much simpler in tone than most of his other pictures, but Sturges puts his personal stamp on the material, which might not exude as much gravitas in less accomplished hands.

Powell previously starred in several Busby Berkeley musicals at Warner Bros, which pigeonholed him as a prettyboy crooner. Itching to break out of that mold, he signed with Paramount, and in Christmas in July he makes the most of the opportunity, filing an animated yet natural portrayal that carries the film. Though Powell would really come into his own as an actor a few years later playing Raymond Chandler's iconic private eye Philip Marlowe in the film noir classic Murder, My Sweet, he lays the groundwork here, proving he's got the chops to tackle almost any role.

As his perky love interest, Drew projects a winning sincerity, but it's Sturges' stable of colorful supporting actors that really steals the spotlight. William Demarest, Raymond Walburn, Franklin Pangborn, and Alexander Carr all grab the lion's share of the film's laughs in quirky character parts that rev up the madcap momentum.

Christmas in July isn't much more than a trifle, but the seeds of truth buried within it help this screwball romp bloom into a memorable motion picture. The story may not take place during the holidays, but the good feelings this delightful film fosters fit right in with the spirit of the season. 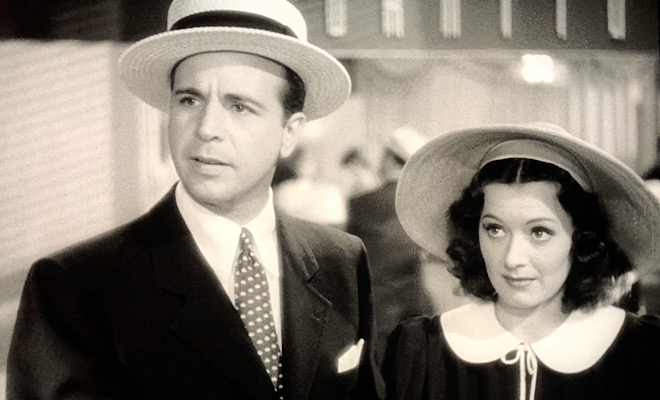 Christmas in July arrives on Blu-ray packaged in a standard case. Video codec is 1080p/AVC MPEG-4 and audio is DTS-HD Master Audio 2.0 mono. Once the disc is inserted into the player, the static menu with music immediately pops up; no previews or promos precede it.

Kino Lorber supplies a very nice 1080p/AVC MPEG-4 transfer that's struck from a new 4K master and features excellent contrast, clarity, and gray scale variance. A healthy, but not overwhelming grain structure maintains a distinct film-like feel throughout, and though sporadic nicks and a few faint vertical lines dot the well-preserved source material, none of the imperfections are distracting. Lush black levels anchor the image, the bright whites never bloom, and sharp close-ups render fine facial features well. Patterns are distinct and rock solid throughout, background elements are easy to discern, and no digital hiccups afflict the picture. For an almost 80-year-old movie, Christmas in July looks darn good, and this transfer will certainly please diehard Preston Sturges fans who have waited patiently for the Blu-ray release of this classic comedy.

The DTS-HD Master Audio 2.0 mono track supplies clear, well-modulated sound without any age-related hiss, pops, or crackle. The often frenetic music score sounds appropriately robust, the subtleties of the cityscape and office setting come through cleanly, all the rapid-fire dialogue is easy to understand, and a wide dynamic scale keeps any distortion at bay. This isn't a particularly active track, but it does its job without calling undue attention to itself.

The only supplement is an intelligent, often scholarly audio commentary by film historian Samm Deighan, who examines recurring Sturges themes, lauds Christmas in July as the writer-director's "most underrated movie," points out Sturges' cameo appearance in the film, and analyzes the narrative's rich subtext.

A few trailers are also included, the most noteworthy of which is a manufactured Christmas in July preview produced expressly for its home video release.

If you're looking for a Preston Sturges holiday movie, check out Remember the Night, but if you're in the mood for one of the writer-director's signature screwball comedies, you might want to give Christmas in July a spin. This breezy trifle about a practical joke that changes the life of an everyman office clerk and allows him to spread Christmas-like cheer to the underprivileged makes some keen observations about the capriciousness of corporate life while supplying several hearty chuckles. Excellent video from a brand new 4K master and clean lossless audio bolster the appeal of this antiquated classic. Though it can't compete with such iconic Sturges fare as The Lady Eve, Sullivan's Travels, and The Miracle of Morgan's Creek, Christmas in July is a fine example of social comedy, and its arch script, breakneck pacing, and energetic performances help it earn a solid recommendation.

Sale Price 15.84
List Price 29.95
Buy Now
3rd Party 12.5
In Stock.
See what people are saying about this story or others
See Comments in Forum
Previous Next
Pre-Orders
Tomorrow's latest releases