Tired of churning out lightweight comedies, Hollywood director John L. Sullivan (Joel McCrea) decides to make 'O Brother, Where Art Thou?'—a serious, socially responsible film about human suffering. After his producers point out that he knows nothing of hardship, Sullivan hits the road disguised as a hobo. En route to enlightenment, he meets a lovely but no-nonsense young woman (Veronica Lake)—and more trouble than he ever dreamed of. This comic masterpiece by Preston Sturges is among the finest Hollywood satires and a high-water mark in the career of one of the industry’s most revered funnymen.

During a brief period in the early 1940s, Preston Sturges reigned supreme, churning out a number of classic cinematic comedies that showcase his trademark wit, impeccable style, and arch observations about society, character, and relationships. With pictures like ‘The Lady Eve,’ ‘The Miracle of Morgan’s Creek,’ and ‘Hail the Conquering Hero,’ Sturges elevates humor to high art, making us laugh while making us think. He adds depth and emotion to seemingly frivolous topics and tackles controversial issues in a tongue-in-cheek manner that lessens the sting but preserves the bite. Though Sturges predated Woody Allen by three decades and never remotely achieved the same degree of longevity, the two trod similar paths in their respective eras, yet without Sturges, who paved the way for writers to become directors, Allen might never have become the respected and prolific artist he is today.

Sturges wowed critics and audiences alike during his heyday, but many cite ‘Sullivan’s Travels’ as his crowning achievement, and I heartily concur. Playful yet serious, highbrow yet lowbrow, wise yet silly, this satire and social commentary takes many forms as it astutely explores one man’s dogged search for truth and experience. It’s a slapstick comedy, rollicking road romance, sober message movie, and dark film noir all rolled into one, yet the film never feels choppy or disjointed. Rather, ‘Sullivan’s Travels’ seamlessly changes shape as its main character evolves, and like the traveling Gulliver of another famous novel, Sullivan’s journey is strange, wonderful, horrifying, and, of course, ultimately enlightening.

Much like Sturges himself, John L. Sullivan (Joel McCrea) is a successful Hollywood director who specializes in light comedy. Yet Sullivan longs to be taken seriously and create a meaningful motion picture that will reflect the poverty, despair, and hopelessness that has swept the country and been swept under the rug by an industry that makes its millions from turning a blind eye to human strife. Sullivan wants to “hold a mirror up to life” and produce a movie filled with “stark realism” that’s “a commentary on modern conditions” and “the problems that confront the common man.” He tries to convince his close-minded studio bosses to let him adapt the socially significant novel ‘O Brother, Where Art Thou?’ for the screen, but the execs question the commercial viability of such a downbeat project and, more importantly, whether the pampered director has suffered enough to make a film about human suffering.

Sullivan agrees with their assessment and vows to experience the underbelly of society firsthand, dressing like a hobo and wandering into the “valley of shadow and adversity” with only a dime to his name, all in the hope of gaining enough insight to create a believable and impactful film. Along the way, he meets a disillusioned actress (Veronica Lake) ready to chuck her Hollywood dreams and go home, but who instead accompanies Sully on his odd odyssey, which takes a number of crazy twists and turns before ultimately giving the director way more trouble than he bargained and pined for.

Filled with snappy repartee, hilarious bits, sexual innuendo, and a number of flippant industry references, ‘Sullivan’s Travels’ captivates from the clever opening sequence, a rousing fight to the death on a moving train that turns out to be a film within a film. From there, Sturges masterfully helms his tightly constructed script, moving from clever satire and madcap frivolity to dark, somber seriousness with surprising dexterity. It’s not easy to flip a comedy on its ear and transform it into something resembling ‘I Am a Fugitive from a Chain Gang,’ but Sturges does so with a brash confidence that’s both disarming and exhilarating.

Sturges’ dialogue dominates the film, but the writer-director also knows when to make his loquacious characters shut their traps. His keen visual sense often proves a picture really is worth a thousand words, and several wordless sequences buoy the movie, recalling the best of silent cinema and emphasizing the communicative power of raw imagery. For example, a bus wildly chasing a go-cart through rough terrain provides several moments of laugh-out-loud hilarity, while a bunch of annoying theater patrons idly crunching wrappers, chewing loudly, and burping during a movie make current-day texting seem almost tolerable. Later, a poetic depiction of homelessness and despair wields more impact thanks to the expressive faces that convey far more emotion and complexity than any preachy dialogue.

McCrea was a Sturges favorite, starring in three of the director’s films, and his everyman attitude, accessible nature, natural sincerity, and classic good looks make him the perfect choice to play a man determined to dirty himself up and tear himself down in the interest of society and art. McCrea doesn’t have as much charisma as Henry Fonda, Gary Cooper, or James Stewart, but he's always believable, and his lively, honest demeanor serves him well here. The casting of Lake, best known for her iconic peek-a-boo hairstyle, seems risky at first, but the glamour girl, under Sturges’ tutelage, proves she can act. Her pouty petulance gradually evolves into spirited gumption during her travels and travails with Sully, and she lends the proceedings an infectious energy and “a little sex,” both of which help keep the story aloft.

Though Sullivan initially denigrates comedy, Sturges convinces us not to minimize and trivialize its worth. From a humanistic standpoint, humor serves a very real purpose, and in the end, its inherent and often deceptive profundity helps, however minimally, to ease the world’s pain and suffering. Laughter, Sturges tell us, may just be the best medicine after all, and, in a nutshell, that’s the simple and enduring message of this often riotous romp, which stands as one of Hollywood’s greatest screen satires and the most enduring and influential film of Preston Sturges’ short yet brilliant career. 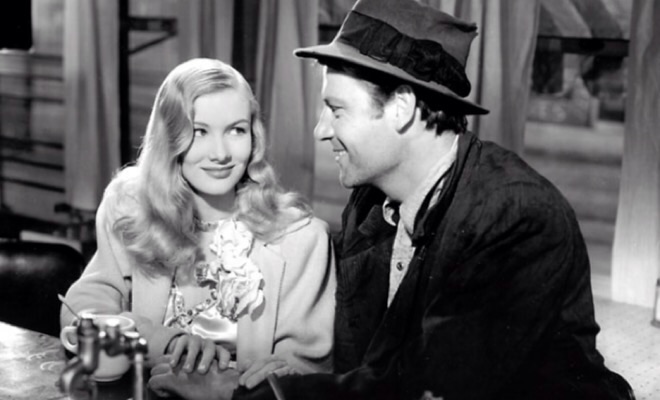 'Sullivan's Travels' arrives on Blu-ray packaged in a standard Criterion case. A 10-page fold-out booklet featuring an essay by Stuart Klawans, cast and crew listings, transfer notes, and three artistic reproductions of fictional movie posters is tucked inside the front cover. Video codec is 1080p/AVC MPEG-4 and audio is uncompressed LPCM mono. Once the disc is inserted into the player, the static menu with music immediately pops up; no previews or promos precede it.

This new high-definition transfer of 'Sullivan's Travels,' which was struck from a recently restored 35 mm nitrate fine-grain, bursts with excellent contrast and clarity. Grain is evident, but blends seamlessly into the film's fabric, resulting in a very watchable presentation that replicates the look of celluloid. While a few scenes appear slightly soft, the bulk of the transfer brims with deep, rich blacks, vibrant whites, and beautifully graded grays, all of which lend the picture a vibrant look and serve John Seitz's natural cinematography well. Occasional crush hinders some nocturnal scenes, but shadow delineation is generally quite good, background elements are easy to discern, and close-ups showcase the glamour of McCrea and Lake, as well as the distinct facial features of the character actors. No digital issues afflict this superior transfer, which immerses us in the rollicking slapstick and absorbing drama of this Golden Age classic.

The lossless LPCM mono track, which, according to the liner notes, was remastered at 24-bit from a 35 mm magnetic track made from the original 35 mm soundtrack negative, supplies clear, well modulated, often robust sound that boasts plenty of fidelity and tonal depth. Any age-related imperfections, such as hiss, pops, and crackles, have been meticulously scrubbed away, and a wide dynamic range handles all the highs and lows with ease. All of Sturges' rapid-fire dialogue is easy to comprehend, and all of the audio effects are crisply rendered, which adds impact and presence to this antiquated track.

A comprehensive supplemental package nicely fleshes out this comedy classic.

With its biting satire, hilarious comic sequences, serious undertones, and creative presentation, ’Sullivan’s Travels’ stands as one of classic Hollywood’s most engaging and substantive comedies. Writer-director Preston Sturges hits the bullseye with this multifaceted tale of a lightweight movie director’s search for truth among America’s poor and downtrodden, and his commitment to bringing their story to the screen. Joel McCrea, Veronica Lake, and a host of memorable character actors file winning performances, but Sturges’ witty script and visual artistry are the real stars of this excellent motion picture. Criterion’s Blu-ray release features top-notch video, strong audio, and plenty of absorbing supplements that really get under the skin of both the film and its director. Almost any Sturges film is worth watching, but this one is definitely a breed apart and comes very highly recommended.

Sale Price 19.99
List Price 39.95
Buy Now
3rd Party 17.15
In Stock.
See what people are saying about this story or others
See Comments in Forum
Previous Next
Pre-Orders
Tomorrow's latest releases