Part Man. Part Machine. All Classic 80s Sci-fi Action! Paul Verhoeven's RoboCop returns to Blu-ray with what can only be described as the definitive special Limited Edition release featuring the Unrated Director's Cut, Theatrical Cut, the silly neutered Television Cut and is loaded with hours of bonus features. Featuring a terrific video transfer and three different audio mixes to blow out your sound system. Top it off with a booklet with great essays and interviews, as well as a bunch of cool swag - this set is a cybernetic monster! Highly Recommended.

"Dead or alive, you're coming with me."

RoboCop - the kick-ass action sci-fi classic satire that we just can't get enough of is back on Blu-ray! After an aborted horrible release from Sony, a less than amazing bare-bones clunker from MGM/Fox, then a pretty great restored release from MGM/Fox in 2014 - one would think we'd be done with Robo-Releases on SDR Blu-ray - but here we are. Thanks to Arrow, we now have what can only be argued as the definitive Blu-ray release. Containing the favored unrated Director's Cut, the solid Theatrical Cut, and for kicks the absolutely neutered Television Cut, you get the whole package.

For an excellent review of the film, check out our review for the 2014 Blu-ray Release 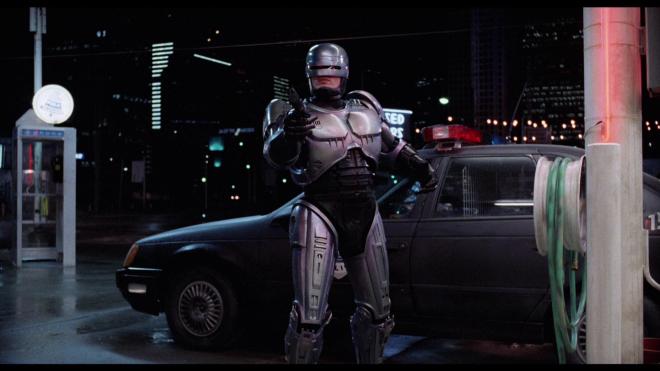 As a kid of the 80s, RoboCop hits close to home. Growing up within striking distance of Detroit, Robo was a local hero. Aside from some peak Tigers baseball, there wasn't a whole lot to cheer for in Detroit back then - but we had a futuristic cyborg! Watching this movie takes me back to that grand era where an intensely violent movie like this could be marketed down to kids thanks to a bad-ass NES game, a cool cartoon, a line of comics from Marvel, and an entire toy line that let you put rolls of caps in the figures' backs to simulate gunfire! I took my RoboCop figure to friggen school as a six-year-old and popped off those caps on the playground! - There's no way kids could do something like that today. The 80s was a grand era indeed.

Sadly the sequels couldn't maintain quality, but in their own ways, they still manage to entertain. I admittedly am a RoboCop 2 defender and RoboCop 3 is a hoot in a so-bad-it's-amazing sort of way. I have a lot of love for this franchise. I've always hoped for another proper entry but after the earnest but less than amazing remake and Neil Blomkamp's recent departure from what was reported as a proper sequel to this original - I fear we'll never get something with this level of amazing detail, humor, and ultra-violence. At least not anything that stands alongside this original's quality. But that's okay - nothing can take away from this film's imprint on popular culture - and my childhood!

RoboCop brings justice to Blu-ray in a two-disc Limited Edition release from Arrow Video. The unrated Director's Cut gets it's own Region A BD-50 disc while the Theatrical Cut and Television Cut split a Region A BD-50 disc. The discs are housed in a standard two-disc clear Blu-ray case with reversible artwork. The case is housed in book packaging and comes with a booklet containing new essays and interviews, a reversible poster, lobby cards, and a sticker.

There is also a two-disc SteelBook available of this release, but that wasn't made available for review so I don't know if any of the swag comes with it or not.

Take a look again at our 2014 Blu-ray Review coverage for a breakdown of that disc's A/V presentation. 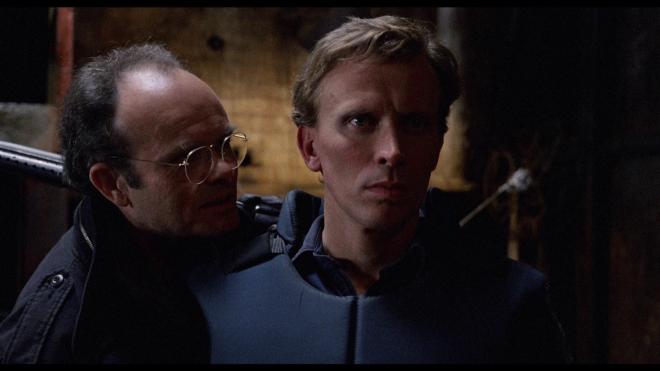 Doing some disc flipping, this release is certainly sourced from the same 4K restoration and presented in the original 1.85:1 theatrical aspect ratio (not the intended 1.66:1) - but it's not 100% the same presentation. More on that in a second. First I'll say that as with the 2014 release - I am over the moon pleased with how this film looks today. From VHS to Laserdisc to DVD, and the first two Blu-ray releases, RoboCop could look somewhat decent or like a complete dog. The new restoration effort pops plenty of detail, evens out the grain field, offers bold colors, inky blacks, and strong contrast. 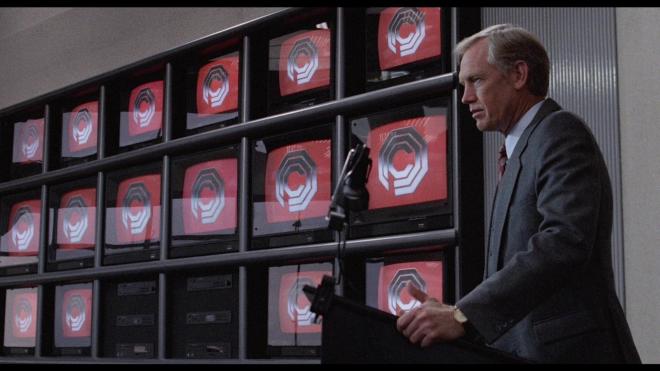 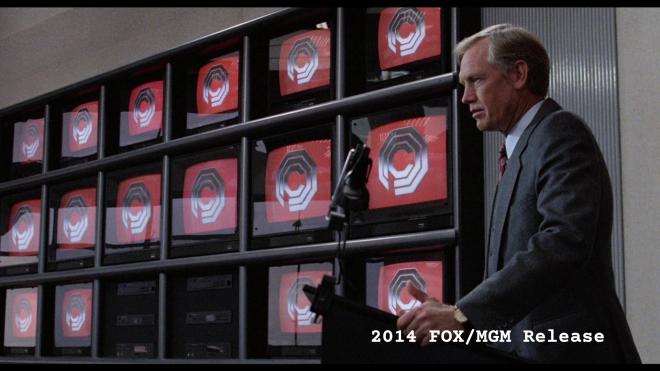 Now, for this release - this transfer has been brightened just a tad and it looks like the encoding has given this release a slight edge in bitrate as well. At first, I didn't quite believe my eyes, I figured it could be viewing conditions in my new house, but after flipping the discs for a few sequences, the brightness is notable - but not a dramatic change. It's much more obvious in motion than in the screengrabs above. The effect of the brightening is two-fold. On one hand, you can see some more fine details and some particularly dark scenes get a little extra clarity. The first OCP boardroom sequence as an example benefits from this nicely where black suits and chairs look much cleaner with a more resolved presence. Flesh tones look a little more accurate as well, not a dramatic shade difference but it's there. Thankfully there aren't any blooming issues to contend with that weren't already present. 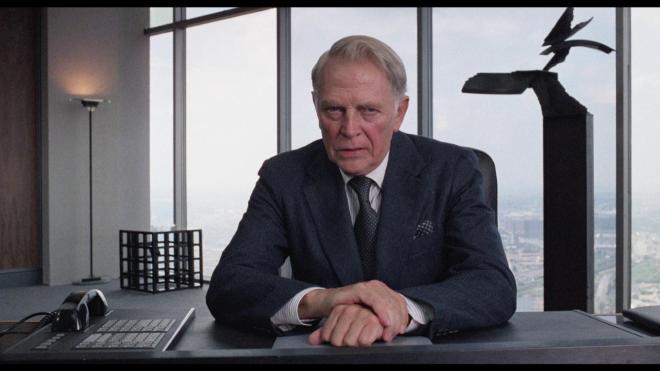 On the other hand, it does make the grain field more noticeable during darker sequences - especially in the steel mill. There are a handful of shot extensions in the Director's Cut where the extra violence and gore that comes in during Murphy's murder - black levels are much darker and borderline crushed. The grain is practically swimming on the screen during these brief moments. They're not lengthy bits nor are they overly distracting because they're so brief, but they're there just the same. The Theatrical Cut and Television Cut don't feature these moments because of the violent content so they're not an issue in those presentations.

When comparing bitrates, the older Fox/MGM disc would cap out around 28-31 Mbps. In the same sequences, this new encoding from Arrow holds steady at 31-32 Mbps and peaks around 35 Mbps for large chunks of time. Not a massive shift, but just enough extra refinement to say this isn't 100% the exact same presentation as the 2014 disc - just the same restoration with a newer encoding that does offer up some slight advantages. 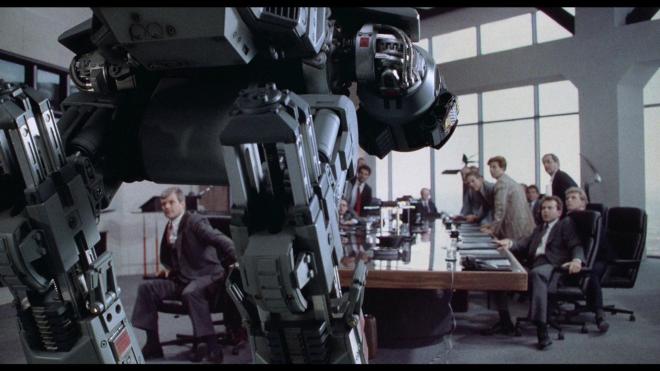 RoboCop is fully equipped this time around to give fans their desired viewing option. On top of the DTS-HD MA 5.1 track that was available with the 2014 release, you now get an English DTS-HD MA 4.0 and 2.0 mix to pick from. While I would personally default to the 5.1 mix for the extra oomph it offers -- particularly with DTS Neural:X employed -- the 4.0 mix offers plenty of immersion in its own way providing clean dialogue and impactful resonant sound effects. Likewise the 2.0 stereo mix is solid material as well, but as you start pulling out channels, the mix starts to sound more confined and loses some desirable dimension. In short, if you rock the 4.0 or the 5.1 audio mixes you're in good shape. 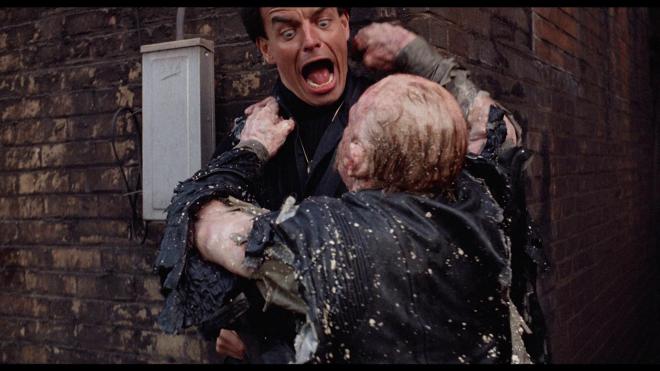 We can thank Arrow for their cooperation by delivering one hell of a bonus features package. Arrow already had a great reputation for going above and beyond with their bonus features packages - but this is just nuts. From new and archival audio commentaries to new and archival interviews - about the only thing they didn't include was a play-through of the addictive NES game! With the booklet included, it's going to take you a long time to pick through everything. 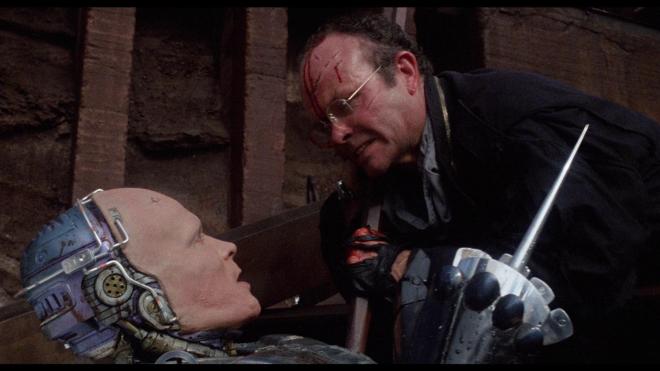 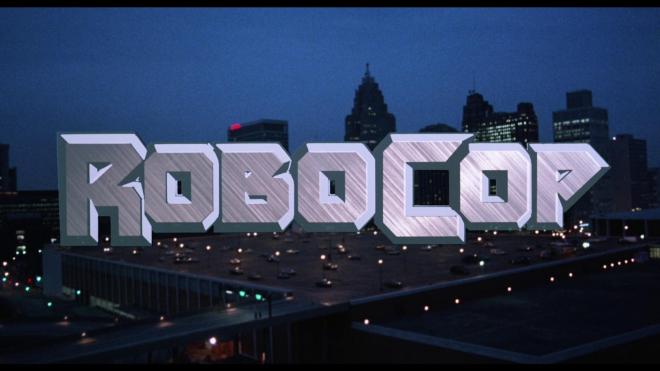 Whether you own any of the previous releases of RoboCop on Blu-ray or not - this is the release to occupy prominent shelf space in your collection! With all of the various cuts of the film on top of hours of bonus content, the attractive packaging, the booklet of great essays and interviews - there's simply no better release of this film on home video. As someone who owned this movie on VHS, LaserDisc, twice on DVD, and twice on Blu-ray - I was hesitant about another release but this one is phenomenal. Arrow pulled out the stops and delivered something terrific for fans. With a great video transfer and three audio tracks to choose from - it doesn't get better than this. Highly Recommended.