He's Back… To Lay Down the Law! It's Megacop vs. Megacorp when Detroit's cyborg crime-fighter hits the streets to protect the innocent – this time from corporate greed! When the ruthless corporation that runs Motor City begins kicking families out of their homes to clear space for a profitable new real estate project, RoboCop (Robert John Burke, 2 Guns, Limitless) joins with a renegade band of freedom fighters to save them. But RoboCop must face some deadly foes, including a lethally efficient android and a dangerous gang of thugs. RoboCop's latest arsenal of high-tech weaponry only somewhat evens the battlefield, as this lone superhero takes on the entire army of corporate militia in an all-out war to control Detroit! This last film in the trilogy is directed by cult filmmaker Fred Dekker (The Monster Squad, Night of the Creeps). Starring Robert John Burke, Rip Torn, Mako, John Castle, and CCH Pounder.

A year shy of its 25th anniversary, RoboCop 3 remains as unmemorable today as it did when it originally assaulted theaters with its badness in 1993. About the only thing that still comes to mind when thinking back to the early 90s during its theatrical run is its equally terrible promotional campaign. From the posters to the TV spots (For some reason, I don't recall the previews.), the movie looked downright laughable with our robotic hero pointing his signature gun like a gunslinger in billboards or commercials ending with a final shot of him flying over a battle scene shooting rockets at a tank. The new toy line, on the other hand, was far more tolerable and in line with the spirit of the franchise -- ultra-violence excitement for the whole family! They seemed like a good deal of fun (Murphy comes with a jetpack and can now talk!). But I was sadly too old by then to play with them. Some time later, when the movie finally released on VHS, the preposterous spectacle that unfolded before my eyes only confirmed what I already suspected.

But putting our nostalgia glasses to the side for the moment -- but not too far from reach because I'm sure we'll need them again soon -- it's immediately apparent what went wrong with this second sequel to the cult franchise. Peter Weller did not return to reprise his iconic role as the futuristic police robot struggling with lingering traces of humanity, reportedly because Mr. Weller was busy on David Cronenberg's better-loved Naked Lunch. Personally, I imagine he read the script and laughed it into the recycling bin (I also like to imagine him as a tough environmentalist). In either case, the actor was replaced with Robert Burke, who surprisingly isn't terrible, but it's also easy to see why they picked him, aside from his mild resemblance to Weller. Burke does a terrific impression of a robot, which sadly includes his performance. He's much too bland and mechanical in a character that should express his humanity in his facial expressions and mannerisms, and he delivers his lines with a dry indifference that lacks even a smidgen of wit or knowing mockery. 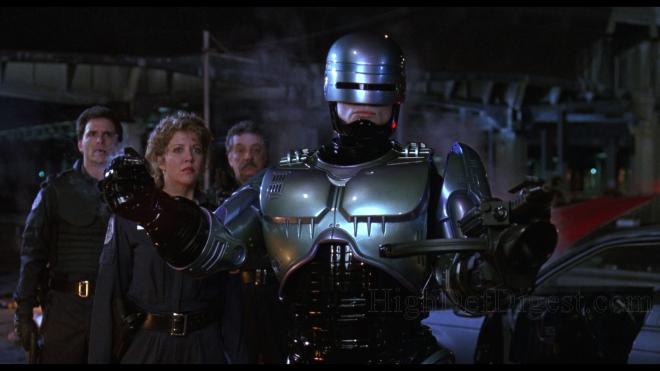 Then again, some might argue he worked with what he was given, but even in that respect, we stumble upon several more issues. After already ruining his original idea for the sequel, the studio somehow saw fit to request another script from Frank Miller, which was again butchered and ripped apart for this production. (Miller later turned his story as the foundation for a comic series in the early 2000s.) The premise of a despotic corporation via OCP squashing on individual civil liberties is expanded upon here, adding a new fascist-like police force made up of mercenaries. Also, the company has grown into an evil Draconian regime -- or as it is referred to in the film, "Oppressive Capitalist Pigs" -- with a kind of tyrannical rule that forcefully evicts people from their homes so that a Japanese investor Kanemitsu (Mako) can take part in developing Delta City. Other than an armed battalion, Miller's story introduces a new villain in the ninja android called Otomo, but he fails to offer much of a threat to our robo-hero except as an excuse for then state-of-the-art special effects.

With everything culminating to that aforementioned battle between the residents of Cadillac Heights and OCP's private army, it's actually surprising RoboCop 3 didn't turn out better or even slightly entertaining. The script, in which the film's director Fred Dekker also takes co-writing credit, is tightly structured with a pace leading towards an explosive, climactic finish. But Dekker, who's better known for directing Night of the Creeps and Monster Squad, doesn't have the chops for arranging exciting action sequences and is, sadly, even worse at making the ridiculously stupid one-liners showering nearly every scene the least bit amusing. Whereas the previous two productions were knowingly satirical in its delivery, with the first being superior over its sequel, this robo-dud evolves into a cartoon and caricature of its predecessors. And toning down the violence for the sake of a more family-friendly PG-13 rating didn't help the production either. Unless viewers want to see RoboCop fly around in a jetpack or see The Mutants gang from Miller's The Dark Knight Returns redone as The Splatter Punks, then there's no reason for visiting this misfire.

Shout! Factory brings RoboCop 3 to Blu-ray as a "Collector's Edition." The Region A locked, BD50 disc sits inside a blue, eco-elite case with reversible cover art and slipcover. At startup, the disc goes straight to an animated menu with full-motion clips and options along the bottom.

Although our flying robo-hero doesn't land on HD as smoothly as its predecessor, the folks at Shout! Factory do an excellent job with what they were given. A couple minor tweaks here and some new, shiny gear there, and RoboCop 3 is brought back to its former glory. Of course, much of this is thanks to a source that appears to be in excellent shape, showing superlative definition and resolution in most every scene. Fine lines and objects are sharp and detailed, the lettering on buildings and signs in the distance are legible, and facial complexions are revealing during various close-ups. Contrast and brightness levels are well-balanced, displaying crisp, clean whites and deep, dark blacks that provide the 1.85:1 image with appreciable depth. Beneath a thin layer of natural-looking grain, richly-saturated primaries shine with vibrancy and accurately rendered secondary hues provide the 1080p/AVC MPEG-4 encode with warmth. In spite of showing its age during the date visual effect in the second half, the fans will love the results.

Similar to its predecessor, the third entry in the franchise arrives with two satisfying DTS-HD Master Audio options: a 2.0 stereo soundtrack and a new 5.1 surround sound mix. Whichever the listening preference, the front-heavy design is spread evenly across all three channels, creating a welcoming and broad soundstage. Even during quieter moments, the lossless mix comes with a good amount of background activity that discreetly moves across the entire screen and some of which extend into the surrounds in the 5.1 option without seeming forced. A detailed mid-range keeps the action engaging, as the higher frequencies remain distinct with excellent separation amid all the gunfire and explosions. Low bass is somewhat lacking for a movie of this type, but there's enough oomph to provide the music and action some weight and presence. And finally, the track also arrives with good, intelligible dialogue throughout.

Audio Commentaries. A pair of commentaries kick things off, starting with a surprisingly candid conversation by director Fred Dekker where he openly talks about the production's failures while also sharing various anecdotes from the set. This is followed by another chat with the team behind the documentary Robodoc: The Creation of RoboCop, and they are unapologetically forgiving about the second sequel while also acknowledging its many drawbacks.

Delta City Shuffle: The Making of RoboCop 3 (HD, 38 min). A collection of brand-new interviews with various cast and crew members, most notably Dekker and star Nancy Allen, reminiscing on making the movie and sharing some amusing stories.

Robo-Vision: The FX of RoboCop 3 (HD, 12 min). Another set of interviews with the special effects team responsible for the visuals with thoughts on early CG technology being a highlight.

Climbing the Corporate Ladder (HD, 11 min). Actor Felton Perry, who plays executive director Donald Johnson at OCP in all three films, talks about his role, career and the character.

Training Otomo (HD, 9 min). Actor Bruce Locke and martial arts trainer Bill Ryusaki are also given a few minutes to share their thoughts on the production and Locke's rigorous training for the role.

War Machine (HD, 9 min). Special effects designer James Belohovek returns to share his involvement on the production, what he did differently from the sequel and other anecdotes.

A year shy of its 25th anniversary, RoboCop 3 remains as unmemorable today as it did when it originally assaulted theaters with its badness in 1993. From another story by Frank Miller and directed by Fred Dekker, the second sequel is showered with laughably bad dialogue, uninteresting action sequences and a plot that grows progressively sillier and sillier until reaching an unintentionally hilarious climactic battle. Nevertheless, the Blu-ray lands with an excellent audio and video presentation that makes the production's badness all the more glorious to behold. And with a brand new set of supplements attached to the sticker price, the overall package is very tempting for cult collector's and enthusiasts looking to complete the trilogy.

Sale Price 13.79
Buy Now
3rd Party 13.79
In Stock.
See what people are saying about this story or others
See Comments in Forum
Previous Next
Pre-Orders
Tomorrow's latest releases