RoboCop 2 pits two unstoppable cyborgs against each other in a battle to the death! When Detroit's decent into chaos is further compounded by a police department strike and a new designer drug called "Nuke," only RoboCop can stop the mayhem. But in his way are an evil corporation that profits from Motor City crime and a bigger and tougher cyborg with a deadly directive: Take out RoboCop. Containing the latest gadgetry and weaponry as well as the mind of the madman who designed "Nuke," this new cyborg isn't just more sophisticated than his predecessor... he's psychotic and out of control! And it's going to take everything RoboCop has – maybe even his life – to save Detroit from complete and utter anarchy. Starring Peter Weller, Belinda Bauer, John Glover, Nancy Allen, and Dan O'Herlihy.

Ten years after taking over the reins from George Lucas to direct 'The Empire Strikes Back,' Irvin Kershner is once again given the keys to drive someone else's project into franchise territory in 'RoboCop 2.' And seeing as how these are not the only two times Kershner has done this, I'm thinking the filmmaker deserves the posthumous-honorary title of "The Prince of the Sequels." Like he did in Lucas's space opera, the director demonstrates he knows what worked well in the original and essentially repeats it. He never strays far from the intentions of his predecessor, but he expands on it with a few creative touches of his own to create a larger world surrounding the main character. This dystopic view of a bankrupt Detroit not only remains inundated with advertisements and TV media as the only source of information, but the content has become more disturbing. Theft deterrent systems have evolved into electric chairs, Earth's pollution has forced citizens to apply green goo to protect from the sun's rays, and newscasters talk apathetically about global disasters.

While the city is on the brink of being bought by the OCP corporation, the same company that played an unwitting villain due to shady dealings with criminals, RoboCop (Peter Weller) finds himself alone fighting lawbreakers and ruthless killers. The now privately-owned police department is on strike, so it's up to our mechanical hero to clean the streets of thieving streetwalkers and a gang stealing all the inventory from a gun shop, including a rocket launcher. The real maniac plaguing the streets though is a new synthetic drug called "Nuke," which is controlled by local terrorist Cain (Tom Noonan). Much of this remains true to the spirit of Paul Verhoeven's original sci-fi classic, as Cain's efforts to rule the city runs counter to OCP's vision for an autonomous, utopic corporate city-state. RoboCop is caught in the middle of this, of protecting the city for the sake of justice and because it's the right thing to do versus following programmed directives and being a conglomerate's product lackey. At the same time, he's also confronted with poverty-ridden, apathetic citizens who've lost faith in the system and interestingly normalized his existence. 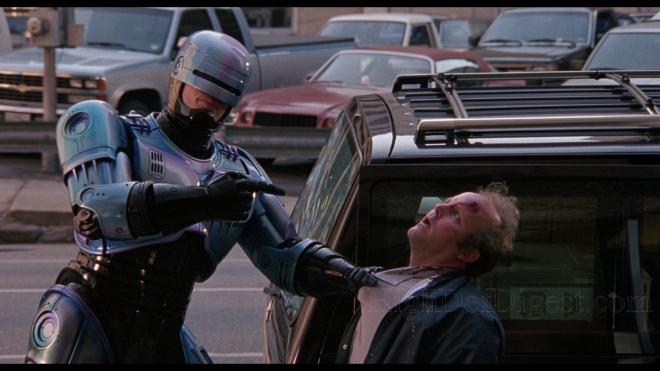 However, unlike what he did for 'Empire,' which many argue is superior to the original if not equally as good, Kershner also deviates into areas that really didn't need exploring or brought up but never resolved. Arguably, the worst offense committed by the filmmakers is reintroducing, or rather, forcefully refreshing our memories, Murphy's former life as husband and father. In full stalker mode, RoboCop creepily drives through the neighborhood where his son and ex-wife now reside, leading to a confrontation and threats of legal action that ultimately lead nowhere other than being a cheap attempt at triggering sympathies. Later, we're introduced to one of Cain's most callous killers, the preadolescent Hob (Gabriel Damon). And for my money — except, I wouldn't pay even a dollar on this wager — this is the most criminal aspect of a script written by Walon Green and Frank Miller (yes, that Frank Miller) mainly because it's a stupidly shoddy attempt at revealing our hero's humanity. Funnier still, his seizing control of a gang with diverse members shows white privilege will remain an issue in the near future. HAHA! It's funny because it's more than likely accurate.

Miraculously, 'RoboCop 2' remains as silly and entertaining as ever, in spite of the production's many, many drawbacks, which has more to do with one's tolerance for bad movies than anything else. OCP's newest character, the crooked psychologist Faxx (Belinda Bauer), makes possible for a new robot cop in Cain, which leads to an unintentionally hilarious action-packed finale that looks like a Ray Harryhausen nightmare. Meanwhile, the only other female character — Nancy Allen reprising her role as the loyal buddy cop, Anne Lewis — is relegated to useless sidekick and eventually babysitter when RoboCop is turned into a Robo-dud and publicity mouthpiece. In fact, that entire sequence is a ploy for cheap comedy that'll leave viewers shaking their heads in embarrassment for the filmmakers.

The whole production is a strange beast in itself, one obviously aiming for the same level of intelligence and insight as its predecessor, but completely oblivious of how Verhoeven accomplished it. And yet, its lack of subtlety and complexity is what makes the sequel entertaining.

Shout! Factory brings 'RoboCop 2' to Blu-ray as a "Collector's Edition." The Region A locked, BD50 disc sits inside a blue, eco-elite case with reversible cover art and slipcover. At startup, the disc goes straight to an animated menu with full-motion clips and options along the bottom.

We return to the crime-infested streets of a bankrupt Detroit with a surprisingly excellent and sometimes stunning 1080p/AVC MPEG-4 encode that puts all previous home video editions to shame.

Made from a brand-new 2K scan of the best available interpositive, the transfer displays lots of sharp detailing throughout with several looking better defined and near demo-worthy. At its best, viewers can make out the smallest scratch and imperfection on RoboCop's armored body, but when he is at his shiniest, the tiny wires are distinct and the uniquely ornate design of the suit is plainly visible. Facial complexions are continuously lifelike and revealing with natural flesh tones. Only issues keeping the presentation from a higher score are several instances of softer, blurrier moments. However, these scenes appear related to the photography, condition of the source and VFX sequences, which is only standout more because of the presentation's superior scenes.

Presented in its original 1.85:1 aspect ratio, the video also comes with a comfortably bright and stable contrast while crisp, brilliant whites give the clothing, random objects and the fluffy clouds against a blue sky a nice, realistic glow. Surprisingly, black levels are inky rich and true with dark shadows throughout that never ruin or engulf shadow details. Most impressive still is a sparkling, vivid color palette with richly-saturated reds and energetic blues showering the entire frame while softer secondary hues provide a good deal of warmth. With a thin layer of grain for a film-like appearance throughout, this is the best the sequel has ever looked on any format.

Our robotic hero also receives an upgrade in the audio department. Ready to face the demands of today's audio criminals with an excellent DTS-HD MA soundtrack, in either 5.1 surround sound or 2.0 stereo configurations, 'RoboCop 2' brings the action with a wide and surprisingly expansive soundstage.

Various activities and bits of commotion litter the background, fluidly panning between all three channels convincingly. The surround sound option extends some of these noises into the sides without feeling forced or being too distracting, and that really was the only notable difference between the two tracks. Otherwise, they're pretty similar, maintaining much of the action in the fronts and exhibiting a clean, detailed mid-range throughout. Sadly, there isn't much by way of low bass though action sequences, explosions and gunfire do come with some appreciable weight to the them. Vocals are distinct and precise in the center, as well. Both lossless audio options are even and serve the film fine, but when given the choice, I still preferred the stereo track because I'm a purist.

Irvin Kershner is once again given the keys to drive someone else's project into franchise territory in 'RoboCop 2,' and like he did with George Lucas's space opera, he essentially repeats what worked well in the original. However, unlike what he did for 'Empire,' he also deviates into areas that really didn't need exploring or brings up certain aspects but never resolves them. The Blu-ray arrives with a surprisingly excellent audio and video presentation that easily blows away previous home video editions. With a new set of informative supplements, the overall package is recommended for fans.

Sale Price 22.97
Buy Now
3rd Party 94.95
In Stock.
See what people are saying about this story or others
See Comments in Forum
Previous Next
Pre-Orders
Tomorrow's latest releases