All About Eve - Criterion Collection

No doubt about it, All About Eve is one of the greatest movies of all time, and Criterion gives writer-director Joseph L. Mankiewicz's razor-sharp portrait of the New York theater world the red-carpet treatment it so richly deserves. The two-disc set features a video transfer that's only marginally better than the previous 2011 digibook release, but the original mono soundtrack is presented in a lossless format for the first time and a slew of both fresh and previously released supplemental material provides plenty of context and perspective on the film and its cast. A hefty booklet and upgraded packaging make this presentation of one of Hollywood's most incisive, sophisticated, witty, and literate films a must-own release.

Shakespeare once wrote, “The play’s the thing,” and boy, was he right! All About Eve won a slew of Oscars back in 1951 (six, to be exact) and still shares the record for most Academy Award nominations (14), but one element of this Best Picture winner rises above its other impeccable components. The script by director Joseph L. Mankiewicz remains one of the finest, most literate, wittiest, and most exquisitely constructed screenplays in cinema history. Countless symphonies are less lyrical and even the most acclaimed cuisine lacks the spice and subtle flavorings of Mankiewicz’s brilliantly concocted dramatic brew. Casablanca may have more quotable lines per capita, but All About Eve sets the gold standard for screenplay excellence. “Perfect” is really the best word to describe it.

Told from multiple viewpoints, All About Eve chronicles the devious manipulations of Eve Harrington (Anne Baxter), an ambitious, unknown aspiring actress who fiercely craves the same level of fame, fortune, and acclaim her self-professed idol, the flamboyant dramatic diva Margo Channing (Bette Davis), enjoys. Eve adopts a pitiable persona to win Margo’s sympathy and infiltrate her inner circle, and once she gains the Broadway star’s trust, she systematically plots to usurp her career and off-stage life. Cat fights, backstage backstabbing, and neuroses fuel the tale, and Mankiewicz laces it all with sublime sophistication and mellifluous grace.

Captivating characters abound. In addition to Margo and Eve, there's the poison-pen critic Addison DeWitt (George Sanders), whose disdainful musings drip with poetic venom; sexy starlet Claudia Caswell, a “graduate of the Copacabana school of dramatic art,” played with doe-eyed ditziness by a young - and at the time relatively unknown - Marilyn Monroe; and Thelma Ritter's priceless Bronx maid, Birdie, the least educated but most street-smart character in the film (she sees through Eve in a New York minute). Celeste Holm, Gary Merrill, Hugh Marlowe, Gregory Ratoff, and Barbara Bates also contribute memorable work in one of the most memorable movies of all time.

All About Eve is a film I could watch on an almost endless loop. It's that good. Mankiewicz's direction is stellar, but his script is music to the ears of anyone who appreciates top-quality writing. As Addison succinctly says to Eve at one point in the film, "There never was and there never will be another like you." If ever a sentence could sum up All About Eve, that would be it.

For a more complete assessment of this movie masterpiece, check out my review of the 2011 Blu-ray digibook edition. 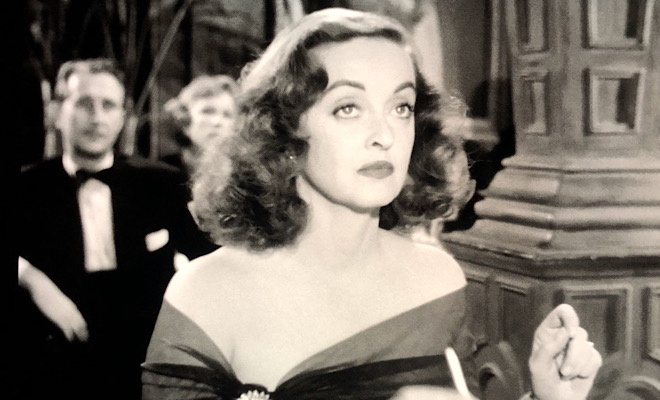 The Criterion edition of All About Eve arrives packaged in a cardboard, fold-out digipack inside a slipcase with a matte finish. Inside are two Blu-ray discs - one contains the film and two audio commentaries, the other houses the rest of the supplemental material. There's also a 48-page booklet that features an essay by Terrence Rafferty; The Wisdom of Eve, the original short story upon which All About Eve is based; several rare photos; a cast and crew listing; and transfer notes. Video codec is 1080p/AVC MPEG-4 and audio is LPCM mono. Once the disc is inserted into the player, the static menu with music immediately pops up; no previews or promos precede it.

According to the liner notes, "The digital restoration was undertaken by Twentieth Century Fox. A 35 mm composite fine-grain, on loan from the Museum of Modern Art, was scanned in 4K resolution and restored." Though this 1080p/AVC MPEG-4 transfer looks strikingly similar to the one used for Fox's 2011 Blu-ray release, it appears - to my eyes anyway - just a tad sharper and more vibrant. When compared to the Criterion picture, some scenes on the 2011 Blu-ray look slightly diffused and dull, while others appear identical to this rendering. The burlap background upon which the opening credits are superimposed seems a hair crisper here, as do some of the close-ups and two-shots. Though Milton Krasner received an Oscar nomination for his cinematography, I've always found some focus issues plaguing this film, especially at the edges of the frame, so while this transfer looks very film-like - thanks to a consistent natural grain structure - it's hard not to notice the variances.

Does this transfer warrant an upgrade if you already own the 2011 digibook edition? Even though the enhancements are minor, I say yes. All About Eve is one of the all-time great movies, so even if a transfer only marginally bests its predecessor, a film of this ilk deserves to be seen in its finest possible state. The Criterion edition may only win this battle by a nose, but it’s a win nonetheless.

Those pondering an upgrade must also assess the audio question. This Criterion release chucks both the newly fashioned DTS-HD Master Audio 5.1 track and the film's original lossy mono track included on the 2011 All About Eve Blu-ray release in favor of a lossless LPCM mono track "restored from a raw capture of the optical track from the same 35 mm fine-grain" used for Criterion's video transfer. In addition, "a quarter-inch magnetic recording was used for the main- and end-title sequences." Purists will certainly applaud this high-quality effort, which preserves the original monaural soundtrack and presents it in the best possible quality.

Fidelity is quite good, a wide dynamic scale handles all the highs and lows of Alfred Newman's majestic, Oscar-nominated music score without a hint of distortion, and most important of all, every morsel of the delectable dialogue is clear and easy to comprehend. All About Eve isn't a very active film from an audio standpoint, but it did win the Oscar for Best Sound, and this track respects that honor. Any age-related hiss, pops, or crackle have been meticulously erased, and as a result, pure silences remain intact and delicate subtleties like restaurant background noise and cityscape atmospherics fully resonate.

Almost all the supplements from the 2011 Blu-ray have been ported over to this Criterion release. What's missing is a brief vintage promotional interview with Anne Baxter, four vintage Fox Movietone News clips covering All About Eve's premiere and awards recognition, and the film's original theatrical trailer. Criterion also supplies a wealth of new and archival extras that further enhance one of Hollywood's all-time best motion pictures. Aside from the two audio commentaries, all the special features reside on a second Blu-ray disc.

The Criterion edition of All About Eve arrives just in time for the holidays, and oh what a delicious stocking stuffer this classic Best Picture-winner would make! Though the video transfer is only marginally better than the one on the 2011 digibook Blu-ray, this two-disc Criterion release does feature the original mono soundtrack in a lossless format for the very first time, as well as several fresh extras, a hefty booklet, and classy packaging. Most of the supplements from the previous release have been ported over, too, which makes this Criterion edition both comprehensive and definitive. Until we get a 4K UHD rendering of this timeless, electrifying classic, this is the best all-around version of All About Eve we're likely to see. Must Own.

Sale Price 19.99
List Price 39.95
Buy Now
3rd Party 13.49
In Stock.
See what people are saying about this story or others
See Comments in Forum
Previous Next
Pre-Orders
Tomorrow's latest releases