Overview - From the moment she glimpses her idol on Broadway, Eve Harrington (Anne Baxter) strives to upstage Margo Channing (Bette Davis). After cunningly stealing Margo's role, Eve disrupts the lives of anyone close to the actress in this timeless cinematic masterpiece that earned a record 14 Oscar Nominations, winning six - including Best Picture!
OVERALL
Highly Recommended

"It's one of the greatest movies of all time!" Now how often have you heard that cliched bit of hyperbole about films not even marginally worthy of such lofty praise? Well, 'All About Eve,' the quintessential backstage, backstabbing tale, stands as one of the few films in history that possesses the goods to back up such a claim. Let's start with 14 Oscar nominations (a record) and six Academy Award wins, including Best Picture, Director, Screenplay, Supporting Actor, Costume Design, and Sound Recording. Four other acting nominations. A dream cast led by the legendary Bette Davis in arguably her greatest role, and featuring a rising young starlet named Marilyn Monroe. A smart, incisive, surprising story. Indelible performances. And, most importantly, one of the finest scripts ever produced on screen, dripping with dry wit, laced with cogent observations about men, women, culture, and society, and populated by memorable characters. Yes, 'All About Eve' is one of the greatest movies of all time, and anyone foolish enough to argue the point deserves a tongue-lashing from the film's caustic, egotistical critic, Addison DeWitt.

As long as there's theatre, and especially Broadway, 'All About Eve' will remain timeless. It doesn't matter that it's 60 years old; the issues it addresses - ambition, manipulation, insecurity, vanity, ego, aging - always will be staples of the Great White Way, yet are by no means unique to it. Whatever the industry, on some level, we all struggle to climb to the top and fight to stay there, and 'All About Eve' examines this common plight through the characters of Margo Channing (Davis), a highly respected, aging actress at a personal and professional crossroads, and her young protege, Eve Harrington (Anne Baxter), a gushing admirer who worms her way into Margo's inner circle and eventually becomes a major star herself. How Eve climbs the ladder, and the price her ambition exacts on herself and others, forms the basis of the film.

In addition to Margo, those who facilitate Eve's rise include Bill Sampson (Gary Merrill), Margo's acclaimed director and much younger lover; Lloyd Richards (Hugh Marlowe), a successful playwright who crafts tailor-made vehicles for Margo; Lloyd's wife, Karen (Celeste Holm), Margo's best friend and the one who initially brings Eve to her attention; Margo's loyal maid and companion, Birdie Coonan (Thelma Ritter), who always tells it like it is; and the acerbic critic, Addison DeWitt (George Sanders), whose snide columns and arch observations rattle everyone's chains.

'All About Eve' honors the theatre more than perhaps any other film, but also lampoons its self-importance and the arrogance and elitism of those who live and breathe it. And it's that mixture of respect and irreverence that helps make the film so fascinating. 'All About Eve' is also one of the few pictures of the period populated almost exclusively by well-educated, sophisticated characters who use language as both a tool and weapon. Yet despite their intelligence, almost all of them are hoodwinked by Eve (proving flattery will get you everywhere), save for the street-smart Birdie, who almost instantly sees through her sickly sweet veneer.

Mankiewicz is first and foremost a brilliant writer, and as such, he makes his words and characters the movie's primary focus. Consequently, 'All About Eve' is visually rather pedestrian, often resembling a filmed stage play. The camera is almost always static, and aside from an interesting freeze-frame shot that bookends the film, there's no innovation. The talk, however, is so riveting, we don't care. We hang on every word, eagerly anticipate the next verbal zinger, and revel in the dialogue's musicality. Some of the exchanges may sound a bit artificial or too preciously constructed, but they're always stimulating and never dumbed down. Mankiewicz consistently respects the viewer's intelligence, and though he may not possess the eye of Woody Allen, as a writer, he's very much his equal, and the script of 'All About Eve' evokes Allen more than any other movie of its era.

Davis was born to portray the flamboyant Margo Channing, and she attacks the role with her customary vigor. Though Davis' patented mannerisms and speech patterns have, on occasion, overshadowed the characters she plays, here they perfectly complement the larger-than-life Margo, enhancing her regal and temperamental persona. Davis spits out her lines, including the immortal "Fasten your seat belts, it's going to be a bumpy night," with relish, and it's easy to see why. So many clever quips, deadpan put-downs, and priceless throwaways. It's a delectable part and Davis devours it.

Baxter, however, is every bit her equal, deftly managing the many shades of Eve's complex character. Her breathy line deliveries and waifish appearance conceal the ferocious tigress lurking within, and when she finally unleashes Eve's inner beast, it's a striking transformation. Ritter is a joy as the blunt Birdie, engendering many of the film's laughs, and the nubile Monroe makes the most of her brief scenes. Sanders, however, nearly steals the show as the debonair, acid-tongued Addison, who views every situation with thinly veiled disdain and every person as a lowly fool. It's a masterful performance and well deserving of the Oscar it garnered.

'All About Eve' is a bona fide classic, the kind of film that never gets old no matter how many times you revisit it. The fresh, eloquent dialogue, rapier sharp repartee, absorbing story, and finely crafted performances all combine to make a movie that's supremely stimulating and satisfying. It's sad to say, but they truly don't make them like this anymore.

'All About Eve' arrives on Blu-ray in a highly attractive digibook that features dynamite cover art and 28 glossy, attractively designed pages filled with photos and text. A cast listing is included, along with a plot synopsis, mini biographies of Bette Davis, Anne Baxter, George Sanders, Marilyn Monroe, and Joseph L. Mankiewicz, background information on the true-life incident that inspired the story, and a listing of the film's Academy Award wins and nominations. (The copy contains one glaring error, referring to the character Gary Merrill portrays as Bill Simpson, when in fact his name is Bill Sampson. IMDb - and, most astonishing of all, the movie's end credits - also list the name incorrectly, but the original screenplay, as well as Celeste Holm's perfect diction in the picture, leave no doubt that his name is indeed Sampson.) The BD-50 dual-layer disc sits snugly inside a pouch on the inside back cover of the hardbound book. Video codec is 1080p/MPEG-4 AVC and a slew of audio and subtitle selections are offered. An all-new DTS-HD Master Audio 5.1 track is the marquee audio option, but purists will be glad to know the original mono track is also included on the disc. Upon insertion, the static menu with music immediately pops up; no previews or promos precede it. 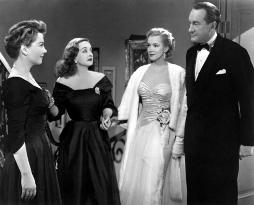 'All About Eve' was meticulously restored before its inaugural DVD release, but this Blu-ray edition noticeably surpasses even that fine effort. The 1080p/MPEG-4 AVC transfer isn't perfect, but improves upon its DVD counterpart in many ways. Grain has been mildly reduced, so the film sports a cleaner, fresher appearance while still maintaining the feel of celluloid. Contrast also has been punched up, lending the image a more vibrant look. Details pop out more, and the picture enjoys a greater degree of depth and texture. The source material also looks cleaner than the DVD; gone are some visible lines that occasionally crept into certain scenes. A few stray marks remain, but you really have to pay close attention to catch them. Close-ups still run on the soft side, but that's more likely due to the shooting style of the era than any transfer deficiency.

The heightened clarity of Blu-ray also makes some focus issues more noticeable. In some scenes in which several actors are in the frame at once, especially the first dressing room sequence, one character seems to be sharply in focus, while the others look just the slightest bit fuzzy. Again, that seems to be a symptom of the original film and it's not terribly evident, but it did catch my eye a few times.

On the whole, however, this is a very striking transfer, with excellent gray level variance, deep, inky blacks (the costumes of Davis and Baxter in particular, as well as the gentlemen's tuxedos look wonderfully lush) and true, stable whites. Shadow detail is quite good, and no digital doctoring is evident. Though the upconverted DVD still holds its own, the Blu-ray is definitely a step up, and fans of the film shouldn't hesitate to upgrade. Anyone who does will not be sorry. 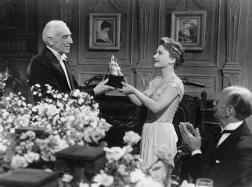 A brand-new DTS-HD Master Audio 5.1 track increases fidelity and provides a bit of a pseudo-surround feel, but the majority of sound remains firmly anchored in the front channels. The audio is clear and bright, with good dynamic range and no hints of distortion. A slight amount of hiss still can be detected during quiet moments, but it never disrupts the action, and any errant pops and crackles have been erased. The essential dialogue is always front-and-center and it's easy to understand every dry remark, witty barb, and rapid-fire exchange, even when whispered. Alfred Newman's music score possesses a robust presence and fills the room well. As 'All About Eve' is basically an interior, "drawing room" comedy, there's not a lot of opportunity for atmospherics or bass involvement, so don't expect any sonic fireworks. Still, this is a solid, if unexciting track that keeps this 60-year-old film fresh.

The original mono track is also included, and there's an Isolated Score Track in DTS 5.1 to enable us to fully appreciate Newman's regal main theme and delicate background music that beautifully underscores the action. 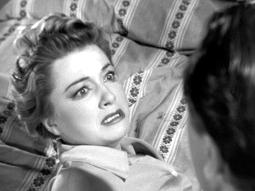 All the extras from all previous DVD editions of 'All About Eve,' with the exception of an old restoration comparison, have been ported over for this release. It's quite a hefty package, with plenty of information about the film, its background, cast, and director. 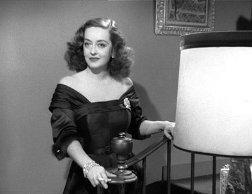 Shakespeare wrote "the play's the thing," and without question, 'All About Eve' ranks as one of the finest screenplays ever written. It's also one of Hollywood's most honored and beloved films, thanks to superior performances and expert direction. Every film collection worth its salt should contain this all-time classic, and this Blu-ray digibook edition, featuring top-quality video and audio that trumps the previous DVD, as well as a substantial supplemental package, is definitely the version to own. Fasten your seat belts, indeed, and enjoy this sublime classic over and over again.

Sale Price 20.89
Buy Now
3rd Party 14.97
In Stock.
See what people are saying about this story or others
See Comments in Forum
Previous Next
Pre-Orders
Tomorrow's latest releases