3-D Film Archive keeps things a little cheeky with their latest impressive restoration 3-D Nudie Cuties. Containing two films The Bellboy and the Playgirls, Adam and Six Eves, as well as the short Love for Sale, the set is a fun throwback entertainment that today is far more playful and goofy than risqué. The restorations are top notch - considering the elements they had to work with. If you're a vintage 3-D fan, this is another essential piece of the collection. For Fans Only.

3-D FIlm Archive takes a peek at one of the more bawdy sides of 3-D filmmaking with their Nudie Cuties collection. The sub-genre may cater to an adult audience - but they're less focused on the prurient interests as one would assume than being playful and silly. The Bellboy and the Playgirls enters the genre as a bellboy recounts to the audience his designs to stop bad behavior by becoming a hotel detective while learning about human interests from a play that is rehearsing next door. It's a goofy premise and leans into some of the scandalous bits with a tongue-in-cheek sense of humor. Considering it's originally a German film (I believe) smashed with new comedic footage and cobbled together it's a bit of an odd duck. It's not the most entertaining venture but it's famous for featuring new scenes directed by Francis Ford Coppola including the big 3-D finale. Those are the moments where the film works best and has some energy and fun. 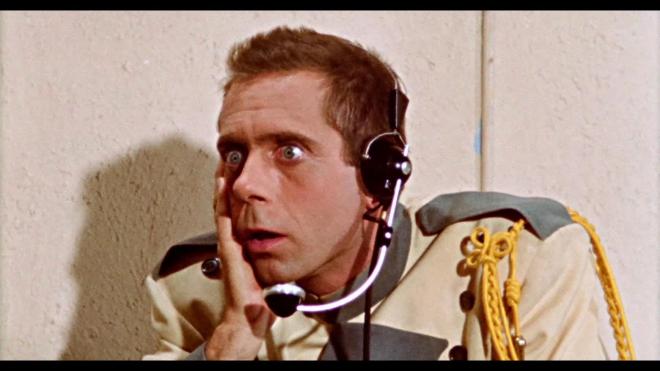 Next up is the raucous Adam and Six Eves featuring a bumbling half-witted treasure hunter who gets lost in the desert and discovers the mother of all oases! As Adam bumbles his way through a treasure map and a few "distractions" from some friendly native ladies, his donkey narrates the scene. You really need to enjoy puns to fully appreciate the humor Adam and Six Eves has to offer. At an hour, the film doesn't overstay its welcome, offers some unique 3-D imagery and is a hoot and a holler the whole way through. Of the two films, my wife and I enjoyed Adam and Six Eves best. The 3-D segment of The Bellboy and the Playgirls is impressive, but the movie itself felt rather dry.

For the shorts, 3-D Film Archive restored and transferred a series of three-dimensional Kodachrome images to 3D Blu-ray. While the images would slide on the spectrum of French Postcards, they're hardly salacious but rather impressive examples of capturing human figures and prop-staging in a single three-dimensional image.

After that, the short Love For Sale from 1953 borders on the line of a buttoned-up Burlesque show that's less of an exposé than a showcase of movement in a 3-D space. There's not much to it really, there isn't any kind of story to follow, but the dancing and the sense of space and dimension are a visual treat - especially the last number that ends with quite the final gag!

3-D Nudie Cuties isn't on the scale of "adult" entertainment as something like 3-D Film Archives work on The Stewardesses, but it's still geared towards the older folks in the room who don't mind a little visually playful entertainment. With some great restorations and some fun 3-D gags, you'll have a good time. At the very least the films are a visual treat.

Kino Classics and 3-D Film Archive deliver 3-D Nudie Cuties to Blu-ray in a single disc set. Pressed on a Region-Free BD-50 disc, the disc is housed in a standard Blu-ray case. The disc loads to a main menu automatically configured for 3-D where you can choose which feature film or short you want to take a look at.

Showcased in 2D/3D Color and Black and white The Bellboy and the Playgirls is the roughest of the bunch. Scene to scene the film faces any number of issues from softness to age-related wear and tear. These anomalies also fluctuate in prominence depending on if the scene in question is in Black and White or Color. I saw scenes of this in school when we had a segment on early Coppola and this looks far and away better than the muddy VHS tape which I believe was a second or third generation dupe copy at that. So kudos to 3-D Film Archive for getting things back to an even remotely watchable condition! When the 3-D gag kicks in the film finds its footing visually allowing for some great 3-D humor and staging. There's impressive depth along the Z-Axis with a great final shot of a firehose leading the out-of-screen effects.

Adam and Six Eves is the best looking of the pack. There is some mild speckling and occasional scratches here and there, but uniformly the color 3-D image is stunning. The film was obviously shot on a soundstage as the backdrop wall couldn't be more than 20 feet behind the actors - which in of itself is a gag thanks to the excellent 3-D. Given the type of film, there is ample usage of the three-dimensional spacing with lots of closeups, middle ground, and background staging. It's wild that this film was shot in natural 3-D but was only released flat. It's really impressive to see how masterfully 3-D Film Archive can find a flick like this or a feature like Jivaro and restore them to how they were meant to be seen but never given the chance.

Love For Sale returns to black and white and as I said feels more like a burlesque dance show. The dancer is pretty confined in her stage so it's how she moves to and from the camera that gives great 3-D depth. For her final number where she has a dance partner on stage, the 3-D effect opens up and really pops - again in the final moment there's a great gag that I don't want to spoil for anyone. It cracked me and my wife up. We wondered if it was going to happen and the short delivered!

With English 2.0 Mono tracks, The Bellboy and the Playgirls and Adam and Six Eves get passing marks for dialogue clarity, sound spacing, scoring, and a sense of atmosphere. Bellboy is much more robust with a variety of set locations and actors moving about and reciting dialogue. Scoring can be a tad shrill but it's all to a playful jazz tune that it's supposed to be energetic and engaging. Dialogue comes through just fine. There's a bit of hiss and some popping but nothing too distracting.

Adam and Six Eves is largely music and the voice-over narration of Adam's Donkey "Smily." There are some incidental sound effects but for the most part, the mix keeps things to those two primary elements. Aside from Smily, there is no real dialogue to speak of here, but it sounds find for what it's aiming to do.

There isn't any kind of restoration comparison content nor is there any filmmaker material here. I'd love to know what Coppola has to say about Bellboy but I guess that's an interview for another time. As it is the extra Love for Sale and the Kodachrome materials are fine extra treats for this entertaining collection.

This may not be the rip-roaring adventures of Jivaro or Sangaree, but 3-D Film Archive restores and preserves important parts of cinematic history. The Bellboy and the Playgirl may not be Coppola's cinematic magnum opus, but it shows where he got his start and his clever storytelling moxie. Adam and Six Eves is a true nudie-cutie genre classic and is a goofy fun time - plus this Blu-ray does the feature justice restoring it and presenting it to its intended 3-D exhibition for the first time! The bonus short and the Kodachrome features are also great additions to this set. If you love vintage 3-D - this one is for you. Flat-only viewers probably won't get much enjoyment out of this set. For Fans Only.