If Beale Street Could Talk

This writer finds a new favorite film of 2018 with If Beale Street Could Talk, writer/director Barry Jenkins romantic and tragic followup to Moonlight. Starring Kiki Lane, Stephan James, and Regina King in a worthy Oscar-winning performance, the film centers on the tragic circumstances of a young couple whose life is thrown into turmoil but never loses hope even when the world is at its bleakest. 20th Century Fox delivers a terrific Blu-ray release with a stellar video and audio presentation as well as some worthwhile bonus features. If you're a romantic at heart, this one comes very Highly Recommended.

Tish Rivers (Kiki Lane) is 19 and pregnant. Her fiancé Fonny (Stephan James) is behind bars awaiting trial for a brutal rape that he couldn't possibly have committed. As Fonny slowly gives to despair about his case, Tish and her mother Sharon (Regina King), her strong-willed sister Ernestine (Teyonah Parris), and her father Joseph (Colman Domingo) must find a way to afford an expensive lawyer while preparing for a baby. As time slowly inches forward, Tish and Fonny hold onto their memories of happier days and the hope that they'll be together and a family. 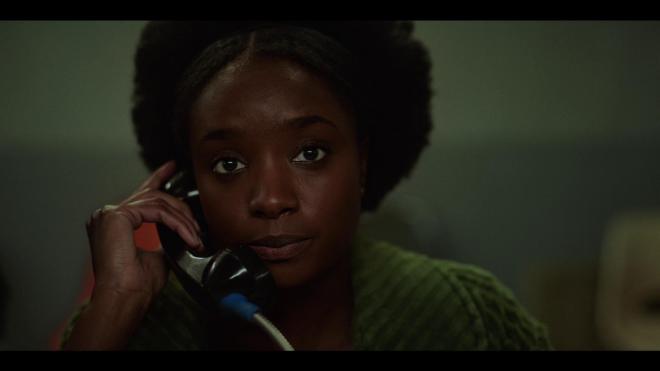 I honestly didn't know what to expect going into If Beale Street Could Talk. I never read the James Baldwin source novel. I never even saw a full trailer for it. I only knew it existed at all because it was Barry Jenkins' follow-up to Moonlight. I heard good things, read some positive reviews, but time and a busy schedule kept me from seeing it in the theater. If you haven't made time for this film, make some now. This tragic romance was an unexpected joy. I know that sounds like a bit of an oxymoron but it's the best way I can surmise the experience of this film. While you ache with the tragedy of the circumstances of Fonny's unjust incarceration, the film never loses its heart and soul. It never loses hope. There's always a chance that sometime someday a great injustice could be made right.

As I watched If Beale Street Could Talk I was struck at how well it worked as a thematic cousin to the classic A Raisin in the Sun. Both films deal with cultural injustices during a turbulent time in U.S. history. While Raisin may take place in Chicago and Beale Street takes place in 1970s Harlem, the pride and pain experienced by both families are relatable. They both have dreams of a brighter future and in the face of adversity and tragedy, they never lose sight of that hope that one day everything will be right.

I have to tip my hat to the young cast of Kiki Lane and Stephan James as Tish and Fonny. This is some of the best romantic chemistry I've ever connected with in a film. My wife and I watched this together and the scenes of these two falling in love and sharing their dreams instantly took us back to the exciting and exhilarating time of when we first met and started dating. It's that wild crazy combination of fear, attraction, and joy that these two captured perfectly. Every step they made towards their future together was romantic and wonderful.

On top of these two terrific performances, Colman Domingo and Regina King are fantastic as Tish's parents Joseph and Sharon. King delivers one hell of an emotionally raw performance - a scene later in the film is absolutely gutting. Colman is equally wonderful in his subdued role as a man who knows what's got to be done, no matter the cost. They play beautifully as two loving parents who only wanted better for their children than they had and aren't willing to stop fighting for that future.

If Beal Street Could Talk is the kind of film that brings out the hopeless optimist in me. I rarely give way to pessimism; I'm just not wired for it, but that doesn't mean I'm not a realist either. You could argue this film doesn't have a happy ending. There certainly is enough tragedy in this romantic story to prove that. In this instance, I actively side with hope. Their situation is less than perfect by the time the credits roll, but it's far better than what it could have been and it leaves you believing that everything will be okay. If you missed Beal Street when it was in theaters, do yourself a favor and pick this one up. If you're a romantic at heart, you'll fall in love with Tish and Fonny.

20th Century Fox delivers If Beal Street Could Talk to Blu-ray in a two-disc Blu-ray + DVD + Digital set. Pressed on a Region-A BD-50 disc, the discs are housed in a standard sturdy two-disc case with identical slipcover artwork. The disc loads to trailers for other Fox releases before arriving at an animated main menu with traditional navigation options. 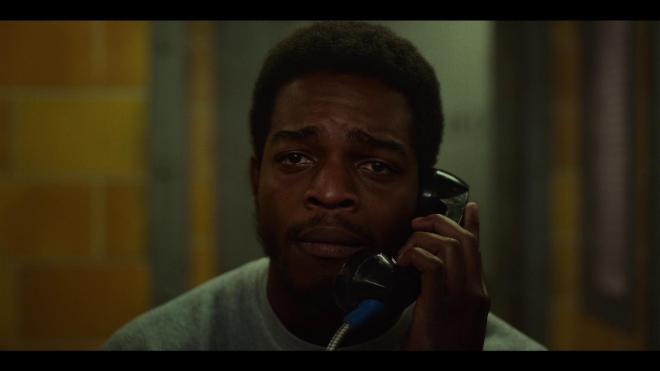 If Beal Street Could Talk offers up an often stunning 1080p 2.00:1 transfer. Reportedly captured at 6.5k and finished on a 4K Digital Intermediate, this is one of the most beautiful looking films I've come across where you just want to stop the movie to look at how real and organic it appears. Details are exceptionally well rendered. Even with the period warm-yellow tones to the coloring, there is a vivid lifelike quality to the picture. And, damn, cinematographer James Laxton knows how to light and photograph faces. Numerous close-ups of the various actors - Kiki Layne and Stephan James in particular - have such a realistic presence you could almost reach out and touch them. It's a true shame that there isn't a 4K UHD Blu-ray available anywhere in the world, this is a such a stunning image I would gladly pay an exorbitant import fee just to see what it would look like.

As it stands, this Blu-ray release will have to do - and thankfully it hits all the marks perfectly. Colors are bold, vivid, without appearing over saturated. Primaries stand out with plenty of punch and skin tones maintain a nice healthy quality. Black levels are nice and inky with great shadows to give a nice sense of three-dimensional depth. The first scene in Fonny's apartment is a real highlight here. This is about as close to perfect as we're likely going to get barring a foreign market 4K UHD release sometime down the road. 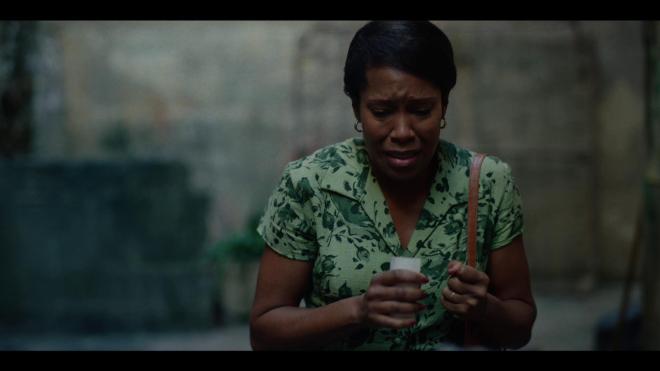 Just as impressive as the video transfer is this often immersive DTS-HD MA 5.1 mix. Even without it being a 7.1 or object-based format, the audio delivers terrific atmospherics. From Tish's cramped family apartment to the large cavernous loft she hopes to rent with Fonny, the audio delivers a terrific range of space and dimension. Dialogue is crystal clear throughout without any issues. Surrounds are engaging but not hyperactive like one would expect from an action spectacle film. Here the surrounds are used to capture subtle shifts in clothing during dramatic beats or lend a sense of realism to street sequences. Scoring by Nicholas Britell is beautiful material (a new favorite of mine) and provides perfect accent material to some passionate scenes. It also gives some great LFE material when a scene needs it. All around this is a terrific mix without any complaints. 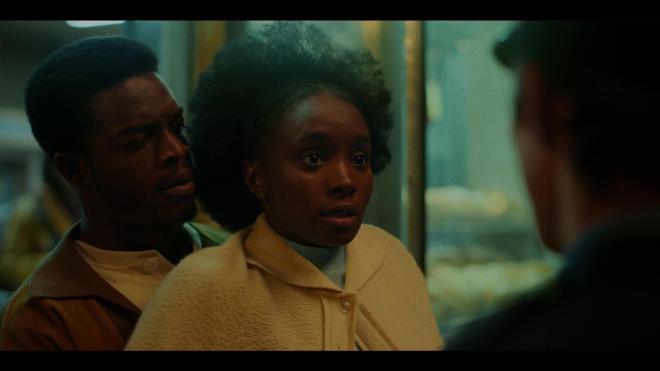 It may not be the largest collection of bonus features ever assembled, but quality wins out over quantity for If Beale Street Could Talk. The commentary with writer/director Barry Jenkins offers a great look at the film and the making of feature is far and away better than your average talking head EPK piece. The collection of deleted scenes is also interesting to see what they left out. This material is great stuff but considering the pace of the picture I can see why things were cut or trimmed down. 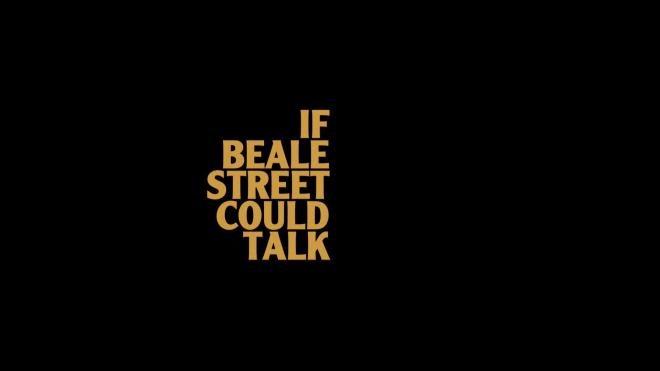 If Beale Street Could Talk is a new favorite for this writer. It's beautifully romantic while tragically sad and yet eternally hopeful. It maintains a realistic sense of optimism and hope, leaving you to believe that one day, somehow, everything will be right for the two fated lovers. With its incredible cast and incredible direction by Barry Jenkins, this is a film I will be returning to over and over again for years to come.

20th Century Fox delivers a stellar Blu-ray release featuring a picture-perfect image transfer and a wonderful audio mix. Bonus features may not be plentiful, but they're actually worth looking at. If you've got a big romantic heart, don't let this one pass you by. If Beale Street Could Talk is Highly Recommended.

Sale Price 8.99
List Price 26.99
Buy Now
3rd Party 2.5
In Stock.
See what people are saying about this story or others
See Comments in Forum
Previous Next
Pre-Orders
Tomorrow's latest releases