A timeless story of human connection and self-discovery, Moonlight chronicles the life of a young black man from childhood to adulthood as he struggles to find his place in the world while growing up in a rough neighborhood of Miami. Anchored by extraordinary performances from a tremendous ensemble cast, Moonlight is profoundly moving portrayal of the moments, people, and unknowable forces that shape our lives and make us who we are.

The chaotic announcement of 'Moonlight' as the 2016 Best Picture winner surely will go down as one of the most bizarre and embarrassing episodes in Academy Awards history. As anyone with a heartbeat on the planet knows by now, a backstage envelope switcheroo caused a befuddled Warren Beatty and impatient Faye Dunaway to present the coveted prize to the musical 'La La Land,' only to have the mistake exposed moments later, much to the shock and bewilderment of everyone on stage...and around the world. The snafu dulled the impact of the well-deserved - and somewhat surprising - victory of 'Moonlight,' the first movie with an all-black cast and first movie with predominating LGBT themes to win the Best Picture award. That's quite an achievement, and hopefully, as time passes, the colossal Oscar night blunder will recede into the ether and become just an odd footnote in the 'Moonlight' production file, not what most people remember about this deeply affecting portrait of devastation, perseverance, and connection.

Countless films have thrust audiences into African-American ghettos and depicted the burdens and struggles of the men and women who reside there. And countless films have explored sexual identity and the difficulties people face as they strive to come to terms with who they are and how they fit into a society that doesn't unconditionally accept them. 'Moonlight' masterfully merges both forms. Writer-director Barry Jenkins' adaptation of a play by Tarell Alvin McCraney lyrically chronicles the development and maturation of a young black boy from his painful youth and adolescence through his first few years of manhood, and depicts with sensitivity and grace how he grapples with his burgeoning homosexuality, incessant bullying by his peers, an uncaring, drug-addicted mother, and living in an intolerant world.

That sounds like a tall order for a small film, but Jenkins quickly proves he's up to the task. Never has a mainstream filmmaker so bluntly explored the homosexuality of a black American male on screen. Whether the movie industry has been too afraid to touch the topic and tarnish the straight, virile image it has carefully cultivated over the years remains open for debate, but Jenkins fearlessly forges new cinematic territory by documenting traumatic personal experiences in the hope of opening minds and hearts to the agonizing torment and shame many tortured souls silently endure. Accepting one's homosexuality is difficult enough for most people, but in a frank yet poetic manner 'Moonlight' shows us that being black and gay presents even more challenges, because sexual roles seem to be more rigidly defined in the black culture, especially in lower income, less educated communities. And 'Moonlight' explores the connection between sexuality and manliness with insight and warmth by taking us inside the fractured psyche of its main character during three significant periods in his life.

Like a play, 'Moonlight' employs a three-act structure, and a trio of different actors play the central character of Chiron. (The poster art for the film is a composite of all three faces.) The first portion of the drama follows a young Chiron (Alex Hibbert) as he forges a relationship with Juan (Mahershala Ali), a benevolent crack dealer, and his girlfriend Teresa (Janelle Monáe), both of whom provide him with shelter and nurturing when life with his abusive mother (Naomie Harris) becomes unbearable. The film's second act focuses on a teenage Chiron (Ashton Sanders), his social troubles at school, and the intimate rapport he shares with his childhood buddy Kevin (Jharrel Jerome), while the final chapter depicts the obstacles an adult Chiron (Trevante Rhodes) faces as he struggles to accept himself and fit into a culture that seemingly has no place for him.

With both tenderness and candor, Jenkins seamlessly weaves all the stories and characters together, and in the process creates a palpable sense of place. Quite strikingly, he juxtaposes the physical beauty of Miami with its grimy urban underbelly and Chiron's daily turmoil, and does so in a non-judgmental manner. "It is what it is" might best describe Jenkins' perspective, and without bias or agenda he tells Chiron's wrenching tale. Point-of-view films like 'Moonlight' often try to manipulate the viewer, but Jenkins opens our eyes to Chiron's unique plight without instructing us what to think or feel. The events unfold naturally and play out believably, and his simple, understated approach enhances their impact.

Such admirable restraint also spills over into the performances, all of which are unaffected and involving. The three actors who portray Chiron utterly embody him, one morphing fluidly into the next and each providing vital shadings that illuminate aspects of his character. The people who flit in and out of Chiron's life make equally strong impressions, but the film's most indelible work comes from Naomie Harris as his belligerent, often unhinged mother. For those of us who only know her as 007's gal Friday in 'Skyfall' and 'Spectre,' Harris' performance is a revelation - raw, real, and mesmerizing. She's the only actor who appears in all three portions of the film, and if she hadn't been up against Viola Davis in 'Fences,' she would have been a shoo-in for the Best Supporting Actress Oscar.

Mahershala Ali's screen time comes at a premium, but he maximizes every moment, bringing great warmth and humanity to a complex character who exploits the weaknesses of others for material gain, yet tries to instill pride and self-esteem in the insecure Chiron. It's a delicate tightrope, but Ali masterfully navigates it. His imposing presence looms over every scene in which he appears - and a couple in which he doesn't - and his quiet, honest portrayal earned him a well-deserved Best Supporting Actor Academy Award. Janelle Monáe as his no-nonsense girlfriend also contributes fine work, as does André Holland as the grown-up Kevin, who consoles the desolate Chiron when he needs him the most.

Like 'Manchester by the Sea,' 'Moonlight' strives to authentically depict a deeply personal topic by showcasing a main character who stoically carries a massive, asphyxiating burden. Both films won screenplay Oscars, but 'Moonlight' puts a more natural spin on its material and the emotions pulsing through it. Jenkins' approach is less self-conscious and more visceral, and though we're always aware 'Moonlight' is a movie (much of its imagery is beautiful), its characters transcend the screen, making us feel like we're eavesdropping on real life instead of witnessing it through a dramatic prism.

Coming-of-age tales are a dime a dozen, but few resonate as strongly as 'Moonlight.' Growing up is never easy, but compared to coming to terms with who we are and accepting the resulting ramifications, it's a cinch. 'Moonlight' chronicles one boy's struggle to do both in an environment that continually conspires to break his spirit. It's an honest and inspiring portrait that iridescently captures not just the black experience or the gay experience, but the human experience. To borrow a line from Viola Davis' eloquent Oscar acceptance speech, 'Moonlight' "celebrate[s] what it means to live a life." The Academy may have screwed up the award presentation, but the right film won the Oscar in the end. 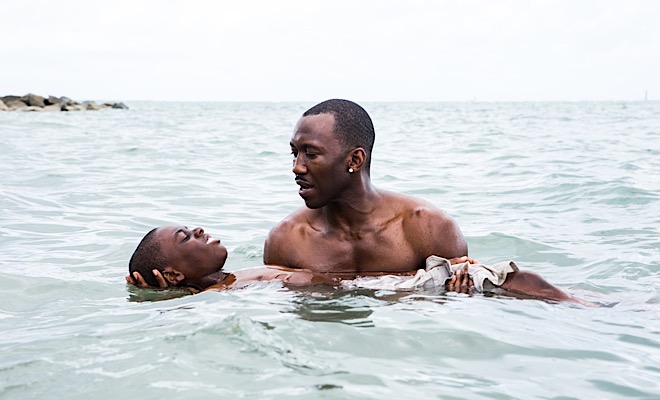 'Moonlight' arrives on Blu-ray packaged in a standard case inside a sleeve. A leaflet containing the code to access the Digital HD Ultraviolet copy is tucked inside the front cover. Video codec is 1080p/AVC MPEG-4 and audio is DTS-HD Master Audio 5.1. Once the disc is inserted into the player, previews for '20th Century Women,' 'Free Fire,' 'American Honey,' 'Swiss Army Man,' and 'The Lobster' precede the full-motion menu with music.

James Laxton's cinematography is rarely flashy, but always elegant, and the 1080p/AVC MPEG-4 transfer from Lionsgate beautifully renders it. Crystal clarity and marvelous contrast heighten the narrative's immediacy and help immerse us in the gritty Miami location. Exteriors err a bit on the bright side (possibly to emphasize the harsh environs), while interiors appear a tad warmer. Not a stitch of grain is present, yet the image exudes plenty of texture, and no nicks, marks, or scratches dot the pristine source material. A slightly muted color palette lends the picture a natural look, but blues are especially vibrant, whites are crisp, and the green foliage looks appropriately lush. Nocturnal scenes benefit from deep, rich black levels and excellent shadow delineation, and razor-sharp close-ups illuminate every pore and follicle on the actors' faces, This is a breathtaking presentation from beginning to end that adds more power and artistry to an already illustrious film.

'Moonlight' is a comparatively quiet film, yet its DTS-HD Master Audio 5.1 track pumps up the volume with a surprisingly potent, active mix. Surround activity may be sporadic, but when rear channel bleeds occur, they seamlessly widen the soundscape. Noticeable stereo separation across the front speakers helps punctuate the action, and strong, weighty bass frequencies provide effective rumbles when necessary. Music selections are especially bold and enveloping, thanks to superior fidelity and depth of tone, and a wide dynamic scale handles all the highs and lows without a hint of distortion. Some of the dialogue can be difficult to comprehend, but that's due more to mumbling by the actors than any audio deficiency, and atmospherics and sonic accents are both crisp and well modulated. Sound isn't the star of 'Moonlight,' but it's a critical supporting player, and this high-quality track handles all the challenges thrown its way.

'Moonlight' is a searing, insightful, and achingly sensitive study of a young boy's arduous struggle to find and accept himself and connect with a society that continually shuns him. A literate script, memorable characters, and superior performances distinguish this deeply personal movie that cuts across racial lines in its depiction of humanity and the relationships that shape and change us. Lionsgate's Blu-ray presentation features top-notch video and audio transfers and a few interesting supplements, all of which help make this quiet, affecting Best Picture winner an illuminating experience. Highly recommended.

Sale Price 9.99
List Price 19.99
Buy Now
3rd Party 2.13
In Stock.
See what people are saying about this story or others
See Comments in Forum
Previous Next
Pre-Orders
Tomorrow's latest releases