A Raisin in the Sun - Criterion Collection

Lorraine Hansberry's seminal Broadway play A Raisin in the Sun comes to cinematic life featuring the original cast, including Sidney Poitier, Claudia McNeil, Ruby Dee, Diana Sands, and Ivan Dixon. The tale of a family dreaming for a better life beyond the confines of a single room apartment is a profoundly human and relatable story and is just as relevant today as it was in 1961. The Criterion Collection gives the film the due appreciation it's long deserved with a stunning new transfer from a 4K restoration and a collection of worthwhile and informative bonus features. If you love great human drama and star-defining performances, A Raisin in the Sun from The Criterion Collection is a Must Own.

Three generations of the Younger family live together in a dilapidated single bedroom apartment in the rough Woodlawn neighborhood of South Side, Chicago. Mama (Claire Benedict) mourns the death of her husband who has left behind a staggering $10,000 life insurance policy that could change their lives. As the family waits for the check to come in the mail, eldest son Walter (Sidney Poitier), who barely scrapes by as a limo driver, dreams of using the money to invest in a liquor store with his pals. His wife Ruth (Ruby Dee) is content with their life and sees the money as an albatross while Walter's medical school-bound sister Beneatha (Diana Sands) believes Mama should make the call. Mama dreams of finally fulfilling her husband's dream of owning a real home. The day the check arrives could be the day the Younger family comes together or tears itself apart. 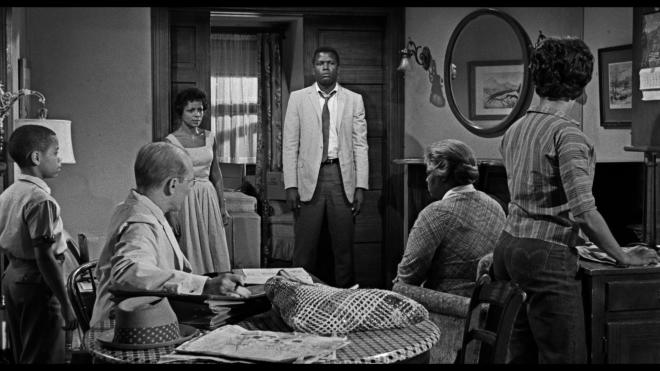 I don't usually like to use the term "timeless" to describe a work as I feel it tends to overstate the importance of a film, but in the case of A Raisin in the Sun, the movie truly is timeless. The story of a family struggling to make ends meet while trying to carve out a better life for their children is just as relevant today as it was when the play first hit Broadway in 1958. A Raisin in the Sun has constantly been revisited over the last 50 years on stage and screen, but for my dollar, it's best with this original cast. It's timeless because all of the themes are still relevant today. Affordable housing, gainful employment, racism, classism, gender roles - all are issues society continues to struggle with.

Sidney Poitier is Walter Younger, a dreamer, a man who wants the world but doesn't accept the work that is required to get there. His life driving rich white people made him bitter towards his own family, constantly talking down to his sister's aspirations to become a doctor. He sees this money as a shortcut, a means to make it on his own and be proud of himself blinded from the pitfalls of such a venture. Meanwhile his wife struggles with Walter's money-soaked aspirations as she contemplates the prospect of bringing another child into the house. As Mama tries to chart a course for the family's long-term needs, she has to keep her grown children from fighting while also taking side jobs to help keep them afloat. All of these scenarios are relatable. Everyone wants their slice of the American dream and are willing to do just about anything to get it - even if it means disappointing the people they love the most.

A Raisin in the Sun is the sort of story that sticks with you. It keeps you thinking about your own world and the people you know. While everyone's situation may be different, it's easy to empathize with the characters. Add in the grief they have to endure with prejudiced neighborhood communities, the pain and anguish of the Younger family become all the more tragic. While the film ends on a relatively high note, there is a melancholy air. They certainly are moving on to greener pastures but that doesn't mean they're not going to be without hardships.

As I said earlier, it's the cast that makes this film. Working from a screenplay by playwright Lorraine Hansberry, all of the principal cast of the Broadway show return. It's the established organic chemistry between Poitier, McNeil, Dee, Sands, and Dixon that brings the film to life. Most of the action may take place in a single location, but with these stellar performances, you hardly notice it. Director Daniel Petrie does a masterful job keeping an intimate and close perspective of the family without too much outside exploration. Content to let the actors tell the story, the production isn't flashy or overdone. It's simple and in that way very human. If you haven't seen a stage production or read the play, this film of A Raisin in the Sun is essential viewing.

The Criterion Collection adds A Raisin in the Sun to its ranks with spine number 945. Pressed onto a Region A BD-50 disc, the disc is housed in Criterion's traditional clear plastic case. Also included is a 24-page booklet containing stills from the film and two essays by Sarita Cannon and James Baldwin. The disc loads to a static image main menu with Criterion's standard navigation. 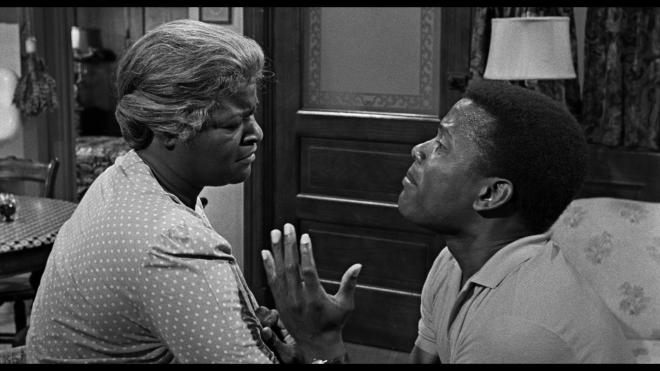 Sourced from a fresh new 4K restoration, the beauty of this 1080p 1.85:1 transfer for A Raisin in the Sun really makes me wish Criterion was releasing it on the 4K UHD format. This is an impressively beautiful image. For a film that largely sticks to a single location - the Younger family apartment - there is an incredible amount of detail to take in. That single room holds a lot of history on the walls and in the furniture. I've seen this movie several times over the years but I was amazed at the little things that came to life. Even innocuous things, like patches in clothing or scuff marks in the couch that you wouldn't think twice about, tell you a lot about the life the family has lived in such a small space.

Film grain is intact and is present without becoming too thick or noisy giving the image a nice film-like feel. The greyscale is picture perfect with a deep range of shadows with solid inky black levels. There's always a sense of depth even in the tightest confines of the apartment. When the Youngers go visit their new house the camera pulls back giving a bigger sense of space and freedom. Free of any age-related issues or speckling, this transfer makes the film look practically brand new instead of one shot in 1961. 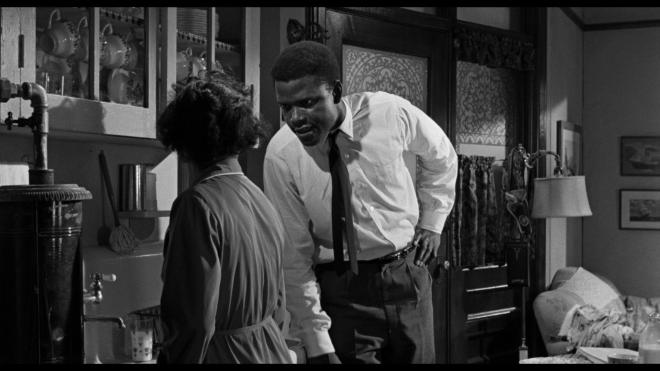 A Raisin in the Sun arrives with a splendid English LPCM mono track. Even with the limited channel range, I was really impressed by the sense of imaging and space to the mix. Most of my viewings of this movie were off of VHS tapes so this was the first time where I felt like I was getting a full appreciation of the audio mix. The opening morning scene where the family is trying to pull themselves together at an ungodly early hour was great because everyone is trying to be quiet but can't help bumping into something. Dialogue is crystal clear with exchanges having a lively life-like presence. Sound effects, although confined, do resonate - particularly in the small space of that apartment. The score by Laurence Rosenthal is a beautiful piece, but its presence is really only felt in between the inserted cutaway to signify a passage of time that normally would have been cued with a curtain drop on the stage. Some slight, ever so mild hiss is present but it's difficult to notice and even then, only in the quietest scenes. Levels are spot on and don't require any adjusting. 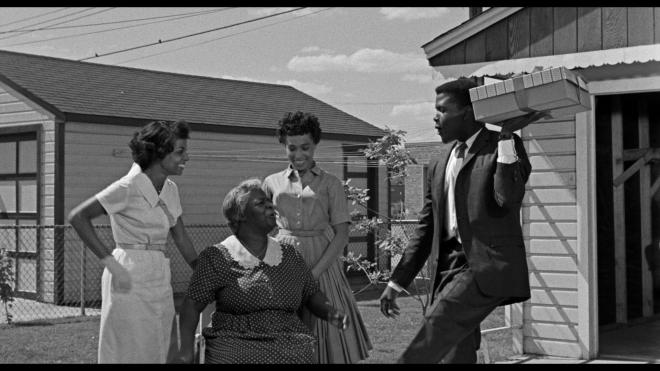 True to Criterion form, the collection of relevant and worthwhile bonus features is practically worth the price of admission alone. The interview segments with the cast are particularly great and the audio interview with Lorraine Hansberry in 1961 proves to be the most insightful offering a look at the real-life influences that inspired the play and the film. 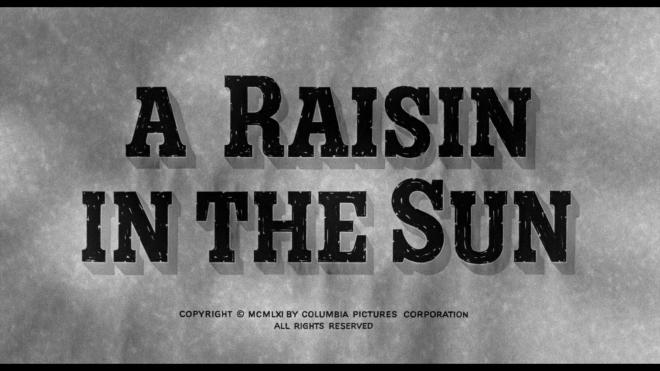 A Raisin in the Sun is a masterful piece of human drama. Lorraine Hansberry's play continues to be an important and relevant work. While there have been many adaptations of this play over the years, this 1961 production featuring the original cast is still the best. The Criterion Collection delivers the film onto Blu-ray with terrific results. The movie has never looked or sounded better and the bonus feature package is well worth the time it takes to pick through. A Raisin in the Sun is essential viewing and this Blu-ray is a great release. Must Own.