Written and directed by Etan Cohen, Holmes & Watson once again reunites the comedy pairing of Will Ferrell and John C. Reilly (Talladega Nights: The Ballad of Ricky Bobby and Step Brothers) only this time with disastrous results. For this Blu-ray, Sony delivers an excellent A/V presentation as well as a fair bit of supplements for those brave enough to dig deeper behind-the-scenes of the movie.  Even so, I still can't in good conscience recommend this atrocity to anyone -- not even the most dedicated Ferrell/Reilly fans. Skip It.

Upon seeing the multitude of harsh critical reviews for Holmes & Watson -- the third buddy comedy starring Will Ferrell and John C. Reilly, and also hearing rumors of disappointed moviegoers walking out of the film during its theatrical run during Christmas of last year, I couldn't help but wonder to myself, "is it really that bad?"  I mean, Ferrell and Reilly have proven on more than one occasion that they have terrific chemistry together, so when casting them in a comedy about Sir Arthur Conan Doyle's iconic sleuth and his trusty right-hand man, how can you go wrong?

Hoo boy...am I ever regretting asking those questions now.

Etan Cohen's Holmes & Watson immediately starts off on the wrong footing and never really has a chance to recover. We're introduced to a pre-adolescent Sherlock Holmes being bullied at school (elementary, my dear reader), where he not only meets his soon-to-be sidekick John Watson, but also where he discovers his masterful powers of deduction. Unfortunately for viewers, this X-Men-style origin sequence severely drags, is devoid of any humor, and merely serves as an overly long and rather pointless explanation for Holmes' lack of emotions.

Flash forward all the way to midlife adulthood, where the incomparable Holmes (Ferrell) and his loyal friend and confidant Dr. Watson (Reilly) are about to embark on their dullest and most baffling adventure yet. When a dead body tumbles out of a giant birthday cake at Buckingham Palace, along with a threatening note that Queen Victoria (Pam Ferris) will be next, the legendary detective finds himself with only a few days to solve the case. Along the way, Holmes and Watson will meet love interests Millie (Lauren Lapkus) and Dr. Grace Hart (Rebecca Hall), pay a visit to Holmes's creepy brother Mycroft (House M.D.'s Hugh Laurie), snort a few vials of cocaine, and eventually come face-to-face with their prime suspect -- Professor James Moriarty (a none-too-happy-looking Ralph Fiennes). Who will come out on top, Holmes or his ultimate nemesis? Or more importantly, do we even care?

There's actually a lot more going on in the heavily convoluted plot than what I summarized above, and that's one of the main reasons why this movie fails miserably. The story veers off here, there, and everywhere, but goes absolutely nowhere. It's so mind-numbingly tedious that you either can't keep track of everything that's going on or just end up not giving a shit. I tried to keep myself engaged, but the longer it went on the harder it became. Ferrell's over-emphasized accent didn't exactly make it any easier to keep up with the punchlines, either, as he sounds like he's yawning as he speaks.

Which leads to another big issue with this movie -- the humor. Or should I say, lack thereof. Now I know comedy is subjective, I really do, but man oh man are the jokes and gags in Holmes & Watson rough. In the entire 90 minutes, I didn't laugh or even smile once. That's a significant problem (and not an exaggeration).

Don't get me wrong, Ferrell does appear to be having some fun in his role and doesn't look like he's just there for a paycheck. So does Reilly, although there are moments where he has an uncomfortable look on his face and it's hard to tell if that's his character's expression, or his. Both men seem to be trying, so how we ended up with what we got is kind of a mystery to me. 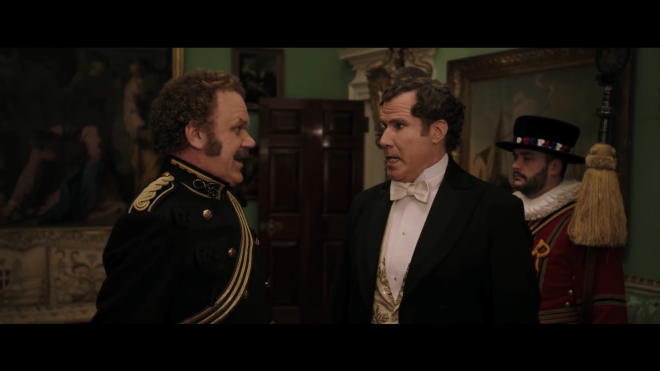 I'm pretty sure this is the first time I've ever given a zero star rating to a film in the dozen or so years I've been reviewing movies, which may seem extreme or possibly even mean-spirited to a degree -- especially since there are films out there that are definitely more inept than this one. The thing is though, those other awful movies at least have something that is maybe half a star worthy in them -- whether it be a single funny gag or unintentional humor that still make you laugh a couple of times during the entire viewing. Holmes & Watson however, sadly doesn't even have anything like that. It's just an excruciatingly painful slog from beginning to end, glued together by some of the most uninspiring attempts at "humor" I've ever seen. I'm sorry, but the talent involved is much better than this, and when Steve Coogan (who's in this) called this movie "rubbish" -- he was being too kind.

Holmes & Watson arrives on home video in a Blu-ray/DVD/Digital combo pack. Both discs are housed inside a typical blue keepcase along with an insert containing a code for a digital copy of the movie. This screener copy also included a slipcover. The Blu-ray is pre-loaded with trailers for Stan & Ollie, The Front Runner, Miss Bala, The Girl in the Spider's Web, Spider-Man: Into the Spider-Verse, and Venom. 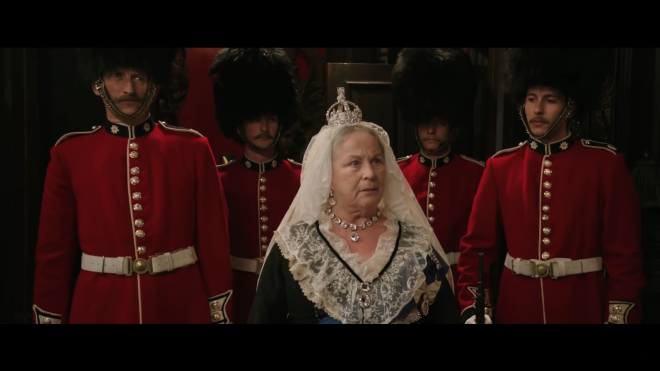 Holmes & Watson was filmed digitally with Arri Alexa cameras and Sony's 1080p MPEG-4 encoded Blu-ray looks pretty sharp. The 2.40:1 aspect ratio framed picture does an excellent job showcasing the fine detail in skin complexions and facial hair, as well as in the Victorian era wardrobes and the architecture around London. Black levels are nicely deep and inky, especially during night scenes taking place down dark cobblestone alleyways, while whites are clean and pure. Primaries also pop off the screen -- particularly the deep reds of the walls of Holmes' flat at 221b Baker Street and the uniforms of the Queen's royal guards.

Every now and then there is some occasional softness/blurring, although I couldn't really tell if it was a flaw in the transfer or just in the way it was filmed. Either way, the issue was minimal at best. Also, as expected with this type of cinematography, some scenes have a nice sense of depth to them while others tend to have a flatter appearance. Overall, though, this is a generally pleasing picture with no noticeable signs of extra processing or tampering. 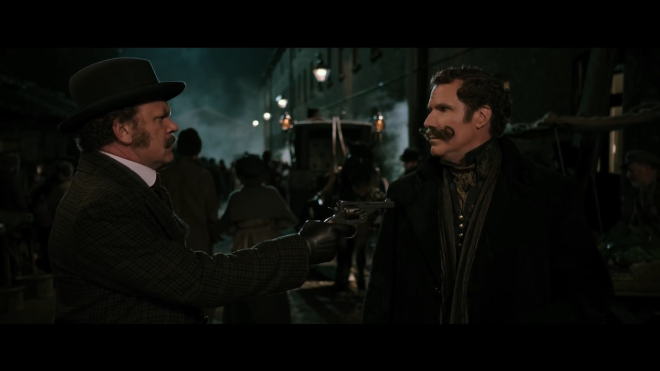 Like most comedies, Holmes & Watson doesn't really demand a whole lot from the sound mix, but the included DTS-HD Master Audio 5.1 track is a solid presentation nonetheless.

Aside from Ferrell's over-exaggerated English accent that is incomprehensible half of the time, the dialogue comes through clearly and front and center. When the music kicks in and the action picks up on screen, the soundscape opens up to the surround channels with smooth pans and directionality. Bullets whiz all over the room when gunfire erupts in the middle of a courtroom, and even quieter scenes that take place outside on the streets deliver the clicking-clacking of horse hooves on cobblestone nicely in the background. Of course, the bass mainly only becomes active during the most intense scenes -- more specifically an explosion near the end of the movie, but again that's to be expected and doesn't hinder this otherwise fine track any. 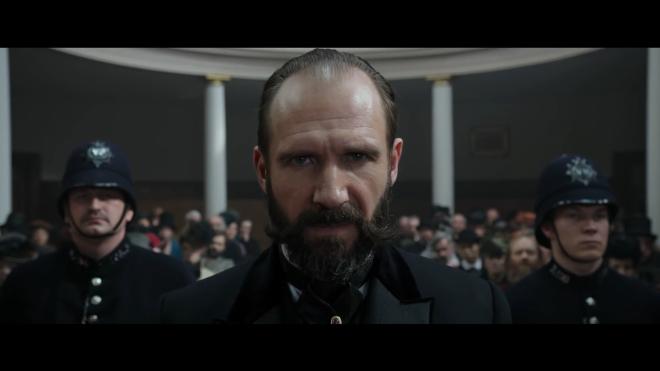 Sony packs Holmes & Watson with over an hour's worth of deleted and extended scenes, a few short featurettes, and a Line-O-Rama gag reel. While the latter does have an amusing moment or two, for the most part, this collection of bonus materials, unfortunately, doesn't do much except prolong the agony of this dismal experience even further. 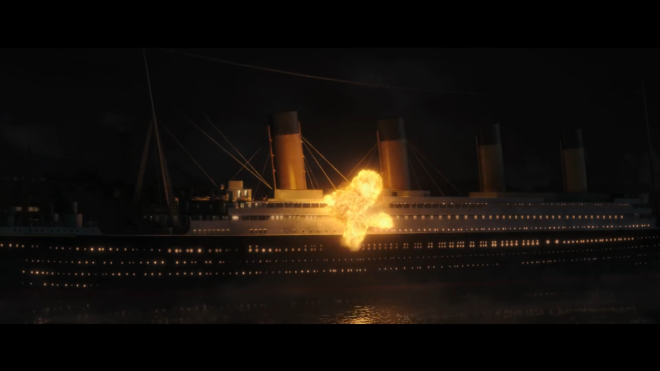 If you couldn't tell by now, I didn't enjoy one bit of Holmes & Watson. Not even Will Ferrell and John C. Reilly's reliable chemistry together could salvage any part of this poorly-written and poorly-executed film. I hate to say it, but it's actually even worse than anything Jason Friedberg and Aaron Seltzer ever concocted -- and that's saying something. The Blu-ray looks and sounds nice at least, but a strong A/V score just isn't enough to save this complete waste of time. Skip It.

Sale Price 8.09
List Price 14.99
Buy Now
3rd Party 7.99
In Stock.
See what people are saying about this story or others
See Comments in Forum
Previous Next
Pre-Orders
Tomorrow's latest releases