Miss Bala is a US remake of the Mexican film of the same name about a makeup artist who is forced to work for a drug cartel. But, instead of the original film's violence and chaos and suspense, we get a watered down PG-13 action movie with a nice video presentation, a lackluster DTS-HD MA 5.1 audio mix, and some great bonus features. My advice? Skip it and go watch the original. 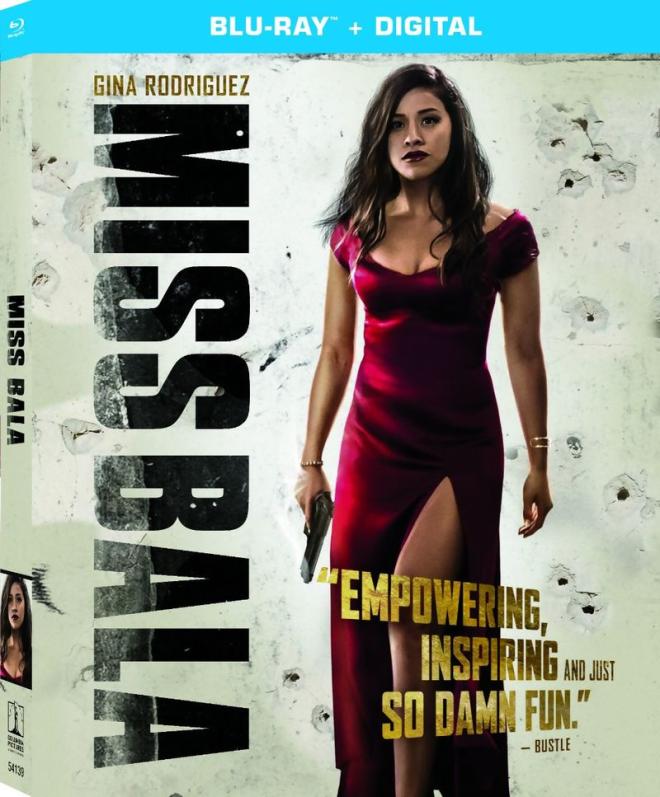 Miss Bala was a 2011 Mexican production that followed a young woman who was kidnapped by the cartel and forced to carry out dangerous jobs for them. The film was violent, well-acted, suspenseful, featured an equivalent R-rating, and was even entered as Mexico's contender for Best Foreign Film at the Oscars.

Flash forward to 2019, we have the American Miss Bala, a watered down PG-13 iteration directed by Catherine Hardwicke that lacks the violence and emotional weight of the original.

The remake follows a makeup artist named Gloria (Gina Rodriguez) who heads to Mexico with her friend Suzu as they prepare for the upcoming Miss Baja beauty pageant. While at a night club, armed cartel gunmen shoot up the place and kidnap Gloria and Suzu. The cartel forces Gloria to transport guns, drugs, money, and explosives across the border while she searches for her missing friend. Meanwhile, the DEA enlists Gloria to be a double agent, raising the stakes further.

Where the original film had beautiful character arcs as well as bold and tough dramatic sequences, the American remake feels polished and void of any real sense of danger or suspense. It's a paint-by-the-numbers PG-13 film with no real grit. Part of the issue seems to be casting Gina Rodriguez. Don't get me wrong, she plays the role well and is very believable as an action star, but already looks like Wonder Woman, whereas the original film's star, Stephanie Sigman, goes through a more significant physical transformation during the story.

Hardwicke and her cinematic collaborators' stylized cinematography never amounts to anything original or engaging either. It's all familiar and mindless, which takes out any excitement and anxiety-inducing drama in each scene. I'm not sure why a studio wanted to make a family-friendlier version of this true story, but it doesn't serve it well. Your best bet is to check out the original film and leave this one along all together.

This digitally shot film looks very good in most situations. Colors are bright and bold with wonderful green trees, blue skies, and neon lights burning bright in club scenes. Big explosions light up the screen with incredible yellows and oranges. Detail is sharp and vivid as well, showcasing facial features like five o'clock shadows, makeup blemishes, wounds, and skin pores. Explosion debris also shows up clearly while wider shots have some nice depth to them. Black levels are deep and inky, for the most part, and skin tones are natural.

However, despite being an overall nice video presentation, there are a few issues with lower-lit sequences. In some cases, sharpness and detailing drop, flattening the whole image. And, in others, minor banding and video noise blemish various shots.

Miss Bala features a good (but not great) lossless DTS-HD MA 5.1 audio mix that doesn't cut it in the action movie genre.

For a big action cartel film with explosions and ringing gunshots, you might expect big, powerful sonic punches to match the visuals, but that's not the case here. LFE tones are quiet, subtle, and lacking intensity. Sound effect directionality is good, and the chaotic moments are clearly distributed through the surrounds, but there's not enough power behind them. The score adds necessary suspense, but, in the end, is forgettable. Dialogue is clear and easy to follow, even during action sequences. Overall, the track is free of any pops, cracks, and hiss, but it's underwhelming for the action genre.

There are quite a few bonus features included here, all of which are worth your time if you like behind the scenes and stunt work. Also included is an audio commentary, deleted scenes, and more.

Miss Bala is a PG-13 Hollywood remake of a far superior, gritty film that lacks suspense and drama. Gina Rodriguez can be an action star, but this is not the film to do it. The video presentation looks good, but the audio is less than desired. There are some good bonus features if you like the film. My advice, though? Skip it and go watch the original.

Sale Price 7.5
List Price 14.99
Buy Now
3rd Party 39.99
In Stock.
See what people are saying about this story or others
See Comments in Forum
Previous Next
Pre-Orders
Tomorrow's latest releases