Hugh Jackman delivers a commanding performance as disgraced presidential candidate Gary Hart in The Front Runner directed by Jason Reitman, a frustratingly thin and themeless retelling of true events. In its quest to capture the chaos of a political campaign in turmoil, it loses sight of the human element of an intensely complicated story. Sony brings The Front Runner to Blu-ray in winning form with an often striking image transfer and a masterful audio mix that captures the insanity of a scandal coupled with a few decent bonus features. Worth A Look.

"The one thing I ever asked was that you don't embarrass me."

Hugh Jackman delivers a 5-star performance as Colorado senator and presidential candidate Gary Hart in The Front Runner, an unfortunately un-focused 2.5-star movie. Based on author and political commentator Matt Bai's book All The Truth Is Out: The Week Politics Went Tabloid, The Front Runner flips and scurries about trying to depict the chaos of running a presidential campaign and the turmoil of scandal, but it never takes the time to stop and examine the main character or the people caught in his orbit. Instead of getting to know the charismatic idealist - but deeply flawed man - the film is content with simply scratching the surface of events as it grapples with the relevant theme of a person's right to privacy. 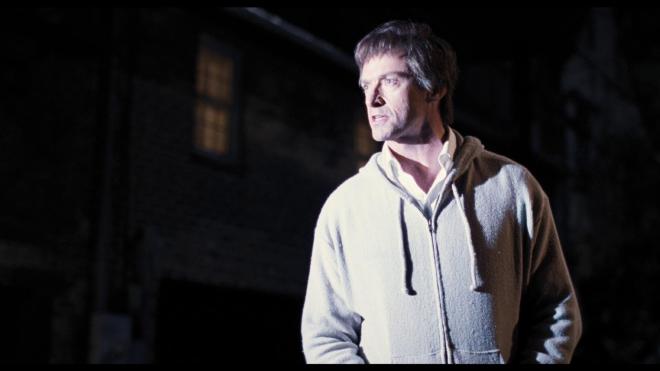 I was almost six-years-old when Gary Hart's private issues became a national media frenzy. I don't remember the specifics, but I remember it being a thing that happened the same way I remember Michael Dukakis in a tank - I wasn't invested because I was more interested in G.I. Joes and Ninja Turtles, but I remember other people in my orbit as a child having deeply personal reactions. I mention this because I, like many kids of the 80s, probably only scarcely remember Gary Hart and Donna Rice the same way that we don't really remember a time when politics wasn't highly publicized where the slightest infraction didn't cause national outrage in some form or another. In my era of political awareness, scandal has always been a part of politics.

By all accounts, Gary Hart's personal infidelities were the first time that a person's "character" was important in the consideration of their qualifications for higher office. This was the perfect chance for director Jason Reitman and company to dig deep into Hart and the events that lead to his campaign completely imploding inside of only three weeks. Even with a commanding Hugh Jackman delivering an impressive performance, the film doesn't bother to dig. It wants to take a stand about the importance of privacy while condemning tabloid journalism - but you don't get to have your cake and eat it too with a character like Gary Hart. Hart had numerous issues - this was just the one he got caught on.

The Front Runner flitters around to various surface events and characters playing loose with the facts, it never settles down. Outside of one great scene, we hardly get to know his wife Lee played by an underutilized Vera Farmiga and why she stays by Gary's side. We don't get to know the players inside Hart's campaign and their motivations for trying to stick things out - partly because they're given so little time that they hardly even have names. We don't even get to enjoy a mocked-up version of the infamous "Monkey Business" picture with Donna Rice sitting on Gary Hart's lap that ultimately sank his campaign. Instead, we get a sleazy depiction of Miami Harold writer Tom Fiedler played by Steve Zissis. Sara Paxton as Donna Rice is given so little time she's reduced to appearing as an airhead model who constantly has to tell people she's smart. J.K. Simmons' turn as political advisor and lawyer Bill Dixon is a non-starter as he's nearly 30 years too old for the part.

I mention all of this because if you really want to dig deep into Gary Hart and the events that transpired and more or less marked the systemic turning point in political journalism, you won't get much satisfaction out of The Front Runner. Radiolab's January 2016 episode "I Don't Have To Answer That" does in 35-minutes what this two-hour movie fails to do with more accurate depictions of key events and the individual players.

I was really excited for The Front Runner. I love political thrillers and exposés. But like the film Mark Felt,  The Front Runner sadly just doesn't do anything meaningful with the material. Again, Jackman is great in it - but he's great in practically everything he does, so even his performance alone may not be enough to hook folks curious about this chapter in U.S. political history. The Front Runner is certainly watchable if only to get you interested in learning more about what actually happened and not the heavily fictionalized version of events.

Sony Pictures campaigns The Front Runner onto Blu-ray in a single-disc + Digital release. Pressed on a BD-50 disc, the disc is housed in a standard snapper case. The disc loads to trailers for other Sony releases before arriving at a static image main menu with traditional navigation options. 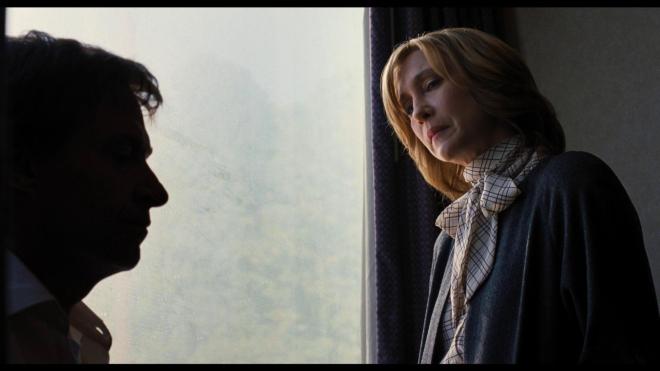 Shot on 35mm and finished on a 2K DI, The Front Runner sports a delightfully filmic 1080p 1.85:1 transfer. Details are impressive allowing for facial features, the dated 80s clothing, and the impressive production design to come through. Film grain is present with a natural quality to it without ever getting too noisy or intrusive. Colors tend to favor stronger yellows but thankfully skin tones maintain a healthy look to them while blue and red primaries have plenty of pop. Black levels are also spot on with nice deep inky blacks with healthy shadows giving the image a notable three-dimensional quality. My one quibble is with some of the digital effects - most notably a faked trip to Red Rocks Amphitheater in Colorado that isn't at all convincing. There are a couple other quick moments like that where digital effects betray the production, but they're not really a fault of the transfer. 99% of the time this is a great looking feature. 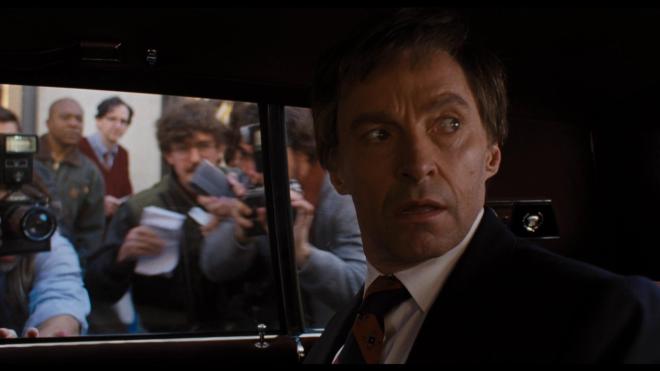 If there's one thing this English DTS-HD MA 5.1 mix does almost too well is accurately depicting the claustrophobic chaos of a political campaign. The first 20-odd minutes is a virtual cacophony of swirling dizzying noises and voices and sound effects as Hart's bid for the 1988 election gets going. Sound effects, voices, the subtle score all blend into this very well engineered mix that makes constant use of surrounds to create an unsettlingly immersive vibe. When Gary's "issues" start to play out, the film switches gears almost into a thriller as reporters stake out his D.C. home. And then the chaos breaks again as the press devours the story. Through it all - the primary dialogue is never lost. Which is an impressive feat considering everything that's happening on screen. Levels are spot on without any issues. You may feel like the opening is too soft or you might have a hard time hearing what's going on, but that's by design. Elements are well spaced giving terrific atmosphere - the confrontation in the alley behind Hart's DC home is particularly effective as is his climactic press conference where his campaign completely unravels.

All in all a great audio mix. 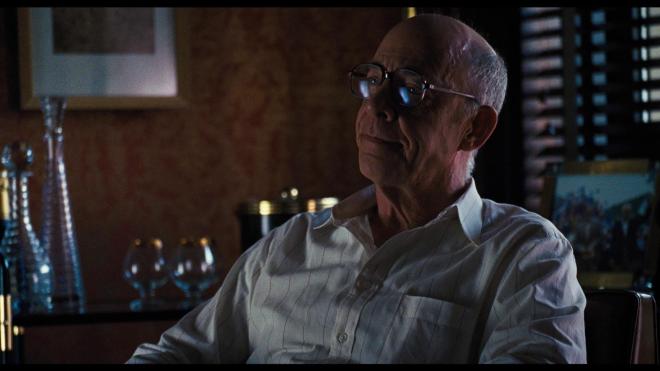 While The Front Runner was a notable under-performer at the box office, Sony cobbles together a modest set of bonus features. Director Jason Reitman offers a fine commentary track that is the highlight of the supplements. The Unmaking of a Candidate is a brief talking-head making-of with some typical EPK stuff but there is a great mix of historical context. Deleted scenes don't really add any new context or additional material. 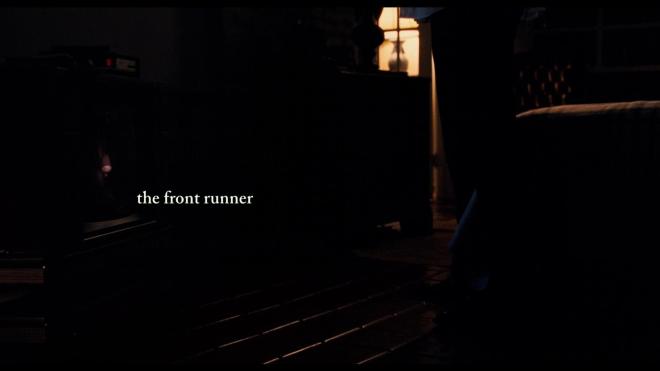 The Front Runner could easily have been an All The President's Men retelling of historical events or even something more satirical like Primary Colors or Wag The Dog. Unfortunately, the spirited and compelling performance by Hugh Jackman goes wasted as the film just doesn't know what it's trying to say. Is it condemning intrusive press coverage by excusing the numerous character issues of a deeply flawed individual? Or is it a cautionary story about the perils of politics and private life? While unsatisfying, it may spark an interest in learning more facts about the events than the fiction presented. Sony Pictures brings The Front Runner to Blu-ray in fine form with a strong A/V presentation, and a couple decent informative bonus features. I may not have loved the movie as I had hoped I would, but it's certainly watchable for Jackman alone. At the very least it's Worth A Look.

Sale Price 7
List Price 19.99
Buy Now
3rd Party 2.75
In Stock.
See what people are saying about this story or others
See Comments in Forum
Previous Next
Pre-Orders
Tomorrow's latest releases