Ant-Man and the Wasp

Bigger, more imaginative and surprisingly funnier than its predecessor, Ant-Man and the Wasp stings audiences with hilarious performances and wildly inventive visuals, saving an otherwise forgettable plot from being obliterated or forever lost to the quantum realm. The size-changing heroes team up for the first time on Blu-ray with a stunning, reference-quality HD video and an excellent 7.1 DTS-HD MA presentation that's better than some of Disney Studios' latest home theater releases. Despite a disappointing set of supplements, the package is nonetheless Recommended for fans.

Despite being a sequel to 2015's surprise hit, Ant-Man and the Wasp is actually more of a follow-up to Captain America: Civil War. Picking up two years after battling the Avengers, Scott Lang (an always amusingly hilarious Paul Rudd) is a couple days away from completing a two-year house arrest sentence for his involvement where he ballooned up to 65-feet at the Leipzig/Halle Airport. And in typical sequel fashion, director Peyton Reed and his team not only do one better by seeing the return of Scott's goliath size riding a flatbed truck through the streets of San Francisco, but they go significantly bigger in a cleverly silly gag that had been building since reuniting with Hank Pym (Michael Douglas) and Hope van Dyne (Evangeline Lilly). More importantly, the sheer enjoyment and laughs of this film come from this splendid balance of comedic timing and cleverly setting up payoffs with the fancifully whimsical visuals that tug at the child-like imagination in all of us, young and old.

From a five-person writing team that includes Rudd, the plot also falls in line with a bitter theme at the heart of the last five installments to the Marvel Cinematic Universe. (I'm including Spider-Man: Homecoming to that list because of Stark and Peter's relationship paralleling the other four.) Those films center around the role of fathers and having to answer to the sins of the past, each in their own unique and interestingly different way. Here, Reed points the finger to Hank whose years of arrogance, smug pride and dismissiveness of others' contributions finally catch up to him. We are told Hank's pride came at the cost of friendships like Bill Foster (Laurence Fishburne), who once worked with Pym as Goliath, while ruining the promising careers of others, such as Elihas Starr, whose experiments led to an accident that created our central antagonist, Ava (Hannah John-Kamen). Unfortunately, this potentially meaningful aspect to the story is never fully embraced and much-too conveniently resolved to deliver any poignant depth or gravity by film's end. 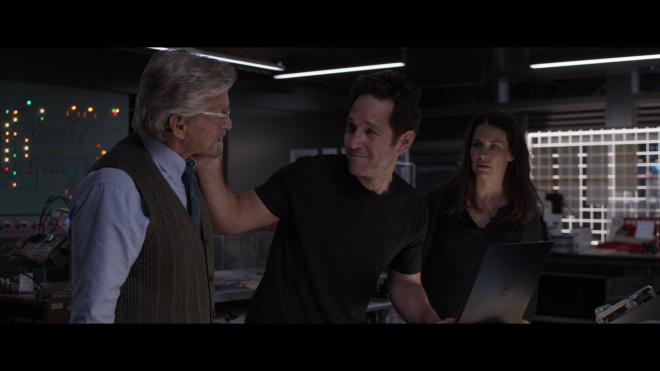 Nevertheless, Reed keeps things lighthearted enough and delightfully rib-tickling to forgive such minor grievances and the fairly blatant use of a deus ex machina. Along with Rudd providing his usual wit and cynicism to every line and encounter, his scenes with the precocious Abby Ryder Fortson as Scott's daughter Cassie — who drops some wink-wink hints for fans of possibly one-day becoming Stinger in one touching conversation — are some of the film's more memorably cute moments. But in all honesty, the real highlight of the production has to be Michael Peña reprising his role as Scott's former cellmate Luis, an original character to the MCU who eventually proves himself a valuable sidekick. Chewing the scenery with goofy childlike glee, Peña's performance immediately demands the spotlight, delivering the biggest, gut-busting laughs. And the scene involving Sonny Burch (Walton Goggins), his henchmen and some truth serum is arguably the funniest moment of the entire movie. Providing a buddy-cop feel better secure him a permanent role in the MCU.

When we shrink down to it, the battle over Pym's laboratory containing a tunnel to the quantum realm where Hope's mom, Janet van Dyne, may still exist is little more than a MacGuffin, uniting three parallel storylines with Ava's determined goal being the chief impetus. But again, Rudd and Peña are just enough to elevate Ant-Man and the Wasp while Reed and his ingeniously creative team bombard the screen with several hallucinogenic-inspired visuals — and Stan Lee's quirky cameo makes light of this fact. The kitchen fight alone, which is honestly used more for demonstrating Hope's skills than moving the plot along, will rival anything seen in the first Ant-Man movie. Aside from Peña's truth-serum sequence with his X-Con cohorts, Rudd shrinking down to kindergarten-child size should be a hysterical scene for the ages, and Randall Park's FBI agent Jimmy Woo further adds to the overall hilarity. And for those wondering where this sequel fits in the rest of the MCU after Avengers: Infinity War, Reed answers those queries in a mid-credits scene.

Walt Disney Home Entertainment brings Ant-Man and the Wasp on Blu-ray as a two-disc combo pack with a flyer code for a Digital Copy. The Region Free, BD50 disc sits inside a blue, eco-elite case with an embossed, glossy slipcover. After a couple skippable promos, the screen changes to the usual menu with options along the bottom of the screen, full-motion clips and music playing in the background.

Ant-Man teams up with the Wasp on Blu-ray with a gorgeous, reference-quality 1080p/AVC MPEG-4 encode, showing lots of razor-sharp details in nearly every scene. We can plainly make out every button, gadget and wire in Hank Pym's lab while the streets of San Francisco reveal every crack, piece of gravel and imperfection along the walls of buildings. The fabric and thick stitching of our heroes' suits are distinct, the CG effects are very well-defined even during the most fast-paced moments, and the entire cast comes with natural, lifelike complexions, exposing pores, wrinkles, and negligible blemishes.

Presented in its original 2.39:1 aspect ratio, the freshly-minted transfer also debuts with spot-on, pitch-perfect contrast, showering the picture with crisp, resplendent whites and outstanding visibility into the far distance. Blacks are inky rich and luxurious with dark, stygian shadows that penetrate deep into the screen without sacrificing the most minute detail, providing the image with an appreciable three-dimensional quality. Next to Thor: Ragnarok and Black Panther, the sequel is arguably the most colorful entry in the MCU, displaying a wide array of dazzling, vividly striking primaries throughout, particularly the reds in Ant-Man's suit. But the cinematography also comes with a stunning selection of sumptuous secondary hues with the scenes into the kaleidoscope-like quantum realm being one of the film's mesmerizing highlights. (HD SDR Video Rating: 96/100)

When comparing this Blu-ray to the 4K Ultra HD Blu-ray with HDR10, viewers will notice improvements in sharpness, brightness, and colors. Overall, that version of the movie takes everything that works well on the Blu-ray, but adds a more elevated sense of visual eye-candy as well an extra layer of photorealism.

After a string of misses and mild disappointments, Disney finally gives a Marvel feature the sort of 7.1 DTS-HD Master Audio soundtrack that should excite home theater enthusiasts.

Granted, it's not the thrilling, ear-bleeding demo-worthy track we would hope in a new action blockbuster and expectations should probably be kept low. But overall, it's an enjoyable and decently satisfying design, layered with plenty of background activity generating a wide and spacious soundstage full of convincing off-screen sounds and movement. On the other hand, the mid-range isn't particularly impressive or dynamic, never really pushing into the higher frequencies, but the loudest sequences maintain strong clarity and separation. The same goes for the low-end, but bass is nonetheless hearty and responsive, providing the various scenes with appreciable presence and oomph. Not surprisingly, vocals are given top-priority and are crystal-clear from beginning to end.

Like many Disney titles, much of the action is maintained across the fronts, but occasionally, effects discretely and flawlessly pan to the sides and rears, creating an amusingly enveloping soundfield from time to time. However, such moments appear reserved for action sequences while quieter segments are generally silent, making the use of the surrounds all the more apparent rather than immersive. Still, bits of debris fly in various directions, seagulls swoop down to catch flying ants, and the whale-like calls of the tardigrades echo all around the listening area. The song selections and Christophe Beck's score also subtly bleed into the sides while also filling the screen with a great deal of warmth and fidelity.

It may not the lossless mix fans were hoping for, but it's an excellent track nonetheless. (DTS-HD MA Audio Rating: 80/100)

Comparing this 7.1 DTS-HD MA track to the Dolby Atmos iteration exclusive to the 4K Ultra HD Blu-ray, the two tracks are quite similar, but the Dolby Atmos mix is slightly more enveloping and immersive during action sequences, offering more articulate sound placement and panning.

The Ant-Man sequel Blu-ray with a small and somewhat disappointing gathering of supplements that is further expended when you redeem your Digital Copy.

Paul Rudd returns in Ant-Man and the Wasp in yet another hilarious performance as the titular wise-cracking, insect-inspired superhero, but in this sequel, Michael Peña steals the spotlight as Scott Lang's former cellmate Luis. Bigger, more imaginative and surprisingly funnier than its predecessor, the sequel stings audiences with hilarious performances and wildly inventive visuals, saving an otherwise forgettable plot from being obliterated or forever lost to the quantum realm. The size-changing heroes team up for the first time on Blu-ray with an exceptional, reference-quality HD video presentation (that's not quite as colorful or sharp as the HDR10 version) and an excellent 7.1 DTS-HD Master Audio soundtrack that's better than some of Disney Studios' latest home theater releases, but not quite as good as the Dolby Atmos mix on the 4K Blu-ray. A somewhat disappointing set of supplements may cause a bit of hesitation, but ultimately, the package is nonetheless recommended for fans.

Sale Price 14.96
List Price 26.5
Buy Now
3rd Party 2.93
In Stock.
See what people are saying about this story or others
See Comments in Forum
Previous Next
Pre-Orders
Tomorrow's latest releases