Thor: Ragnarok takes a small detour from the MCU by turning in one of the funniest and most satisfying entries within the franchise, full of vibrant color and animated humor that essentially feels every bit like a comic book movie without also seeming schlocky. The second sequel in the Thor storyline arrives on Blu-ray with a reference-quality video, a fantastic DTS-HD MA 7.1 presentation and a small, entertaining set of supplements, making the overall package Highly Recommended for fans.

Thor: Ragnarok marks the seventeenth motion picture within the Marvel Cinematic Universe while also being the third entry in the standalone Thor storyline. And part of the film's sheer awesomeness is that it feels fresh, novel and wholly separate from the other movies making up the MCU. It is especially a massive improvement after the lukewarm, if not somewhat disappointing, The Dark World. When a franchise starts becoming predictable and growing fairly long in the tooth, we need something of this caliber, a production willing to takes risks with the material and transporting audiences, particularly those fans intimately familiar with the original source, into unexpected territory. Sporting a new hairdo, this Thor (Chris Hemsworth) sees his mighty hammer Mjolnir destroyed, lost his father Odin (Anthony Hopkins) and learns he has an older sister named Hela (Cate Blanchett), the goddess of death. There are lots to unravel and confront, made all the worst by being stuck on an alien planet while evil dear old sister now rules Asgard.

From New Zealand-born filmmaker Taika Waititi, who gave us the splendidly hilarious horror comedy What We Do in the Shadows, Thor's desperate quest to escape the scavenger planet Sakaar and the twisted gladiator games of the Grandmaster (Jeff Goldblum) is showered with vibrantly animated and energetic colors that perfectly capture a cartoonish comic-book feel without being cheesy or schlocky. Working with the talented photographer Javier Aguirresarobe, Waititi deliberately goes for the shoddy visual stylings of 80s sci-fi films, reminiscent perhaps of The Ice Pirates, Tron, The Last Starfighter or Flash Gordon, aided by the electro-sounds of Devo co-founder Mark Mothersbaugh. The director also makes excellent use of Hemsworth's comedic talents, unafraid of turning the hero either into a swaggering clown or making him the butt of the joke, be it in the witty banter with the Hulk/Bruce Banner (Mark Ruffalo) and the legendary Asgardian warrior Valkyrie (Tessa Thompson) or physical pratfalls. Ragnarok is an absolute joy! 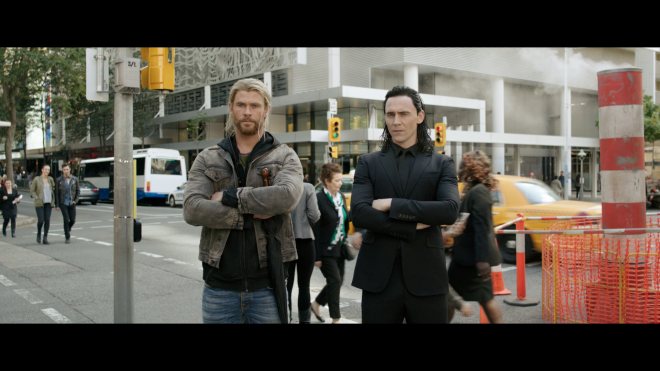 For a more in-depth take on the movie, you can read our review of the day-and-date 4K Ultra-HD release HERE.

Walt Disney Studios Home Entertainment brings Thor: Ragnarok to Blu-ray as a two-disc combo pack with an UltraViolet Digital Copy code, which can be redeemed via RedeemDigitalMovie.com or MoviesAnywhere. Inside the standard blue, eco-vortex case with a glossy, embossed slipcover, the Region Free, BD50 disc sits comfortably opposite a DVD-9 copy. At startup, viewers are taken directly to an animated screen with the usual selection along the bottom, full-motion clips, and music playing in the background.

Thor and Hulk smash their way to home theaters with a marvelous, jaw-dropping 1080p/AVC MPEG-4 encode that's consistently razor-sharp in practically every scene. Viewers can distinctly make out the tiniest threading in Thor's cape, the depressions and pockmarks of Skurge's armor, and the extra-fine stitching in Hela's skin-tight outfit. The craftsmanship and design of the Asgardian architecture are absolutely splendid, exposing the tiniest feature and aspect along the golden-colored walls and pillars of the palace. But on Sakaar, the smallest bit of garbage and debris covering the ground is distinct while the Grandmaster's palace is clean and simple yet elaborate with lots of small imperfections and flaws to appreciate. Even the CG work remains phenomenal, such as being able to make out every crack, scratch, and fracture in Korg's rock body and the breaks and marks in Miek's armored little body. Hulk, himself, has never seemed as realistically rendered as he does here while live-action actors show superb lifelike complexions and textures.

Presented in its original 2.40:1 aspect ratio, the freshly-minted digital transfer also arrives with spot-on contrast and brightness balance, displaying immaculate, pitch-perfect whites without becoming too overwhelming or blooming and allowing for excellent visibility of the tiniest detail in the far distance. There is a clear distinction between the white face paint makeup on some characters, the long paint stripes on spaceships and the brilliantly crisp clouds in the sky. Meanwhile, the rest of the presentation enjoys inky-rich, luxurious black levels with outstanding shadow details during the darkest scenes, such as the opening sequence with the fire demon Surtur in Muspelheim. But overall, the real winner in this grand battle for Asgard is the extravagant and gorgeous color palette that showers every scene with life and energy, like watching a live-action cartoon. While primaries are richly-saturated and sumptuous throughout, it's really the softer secondary hues that lavish each battle and conversation.

From the purplish pinks of the Sarkaar portals and the cyan blues of the garbage to the neon greens of Hela's outfit and the Aurora borealis-inspired light display of the Bifröst Bridge, Thor: Ragnarok is pure reference-quality with one demo-worthy scene after another.

Thor struts into the Contest of Champions equipped with a fantastic DTS-HD Master Audio 7.1 soundtrack, and while he may not walk out the arena as the champion — even though the lord of sparkly fingers would argue otherwise — he does hold his own enough to rock and shake the foundation. Granted, the low-end could be stronger and more aggressive as compared to the first Thor movie, sticking mostly the mid-bass levels, which leaves a couple action sequences a bit wanting. But overall, bass is adequately responsive with an appreciable weighty punch to provide the visual and song selections some depth and presence (bass chart). The more impressive aspect of the design is superb clarity and distinction within the mid-range, exhibiting first-rate detailing in the upper frequencies so that listeners can clearly hear every hit and clang in the sword fights. The entire front soundstage feels broad and expansive as various sound effects convincingly fill the off-screen space and fluidly move between the three-channels without fail while also never drowning out the vocals, which maintain top priority.

For an action-packed Marvel movie, the surrounds are, at times, somewhat lackluster, which is not to say there isn't any activity for occasionally enveloping the viewer. In fact, there are several great moments where certain effects discretely and flawlessly pan from the sides and rears to the fronts, such as when Thor waits for his hammer to travel from a distance just before battling Surtur or when he waits for his umbrella to crash through every room in Dr. Strange's house. There is also our hero's fight against Hulk in the arena where the cheers, applause, and sighs from the crowd fill the entire room, placing the listener in the thick of the action. Other atmospherics, such as the sudden thundering bursts of lightning, tend to expand the soundfield nicely, but they're also far and few in between while the escape from Sarkaar and the final showdown against Hela largely seem reserved across the soundstage, leaving the music to do much of the real work.

None of this is meant to disparage the overall quality of the lossless mix because it's highly engaging and loads of fun. This is only to point out it sometimes feels inconsistent and meant to explain why the track falls short of perfection.

All the same supplements are shared with its day-and-date 4K Ultra HD counterpart, which can be read in more detail in our review of the UHD with HDR10 HERE.

Thor: Ragnarok takes a risk by deviating from the Marvel Cinematic Universe with one of its biggest franchise heroes. And the gamble pays off, delivering barrels of laughs along with mesmerizing visuals. With an ensemble cast reprising their roles from previous films while also introducing several new characters, director Taika Waititi excellently balances the witty comedy with imaginative action in a straightforward story that doesn't detour from its objective, making it one of the most satisfying entries in the MCU. The action comedy arrives on Blu-ray with a superb, demo-worthy video and an awesome DTS-HD MA 7.1 presentation, sure to make fans giddy with joy. With a small but still entertaining set of supplements, the overall package is Highly Recommended for everyone.