Ryan Coogler's Black Panther is a visually-stunning superhero actioner, energized by a surprisingly poignant and profoundly enlightening plot that embraces the troubling sociopolitical issues of our time. The film tackles global affairs on Blu-ray with a gorgeous, reference-quality video presentation, a somewhat disappointing lossless mix and a small but worthwhile collection of supplements, making the overall package Recommended.

MILD SPOILER WARNING — please skip this portion of the review if you want to remain 100% spoiler-free.

Seventeen films into the Marvel Cinematic Universe (MCU), it should come as no surprise a few of those franchise entries have tackled important topical, sociopolitical concerns, even if rather vaguely. Iron Man 3 and the two Captain America sequels, Winter Soldier and Civil War, are arguably unambiguous about certain contemporary anxieties while Thor: Ragnarok very subtly touches on topics about imperialism and refugees. However, Black Panther stands proudly as unique and distinct from the rest of the franchise because it fully and openly embraces the sociopolitical issues informing the plot. Making it the best, unrivaled and significant installment of the entire series, Ryan Coogler's film is, quite frankly, a work of genius, redressing the gross misrepresentation of minorities in the superhero genre and speaking directly to the heart of that community. Coogler confronts issues of globalization, colonization, the unfortunate lasting legacy of America's history with slavery and, most notably, black identity in the 21st Century.

Working with co-writer Joe Robert Cole (The People v. O. J. Simpson), Coogler (Fruitvale Station, Creed) depicts the fictional African nation of Wakanda as an isolated, unspoiled and pristine utopia. It's a beautiful land unaffected by the devasting ravages of colonialism and capitalist greed, a country surrounded by gorgeous natural beauty enjoying the most advanced technological discoveries. Basically, Wakanda's success and prosperity are due to them actively being a hidden secret to the world, thus remaining impervious to the influences of Western civilization and culture. T'Challa (Chadwick Boseman), on the cusp of his coronation, candidly expresses anxieties of his country's involvement in global affairs because he justifiably fears the price of exposing his nation's valuable resources considerably outweigh the benefits. At the same time, we're continuously shown a fledgling king surrounded by other advising him on the positive effect his reign could produce, such as his childhood crush Nakia (Lupita Nyong'o) and his sister Shuri (Letitia Wright). 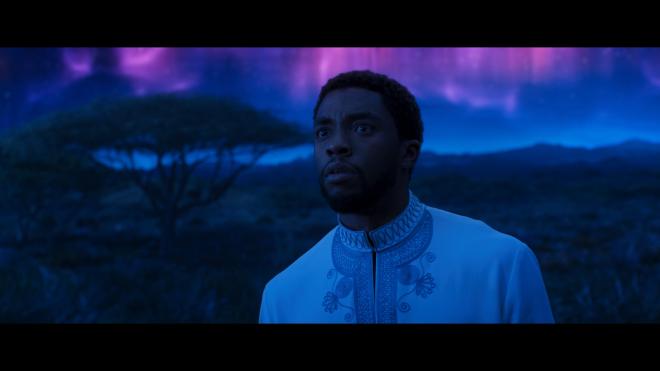 Walt Disney Studios Home Entertainment brings Black Panther to Blu-ray as a two-disc combo pack with a code for a Digital Copy. A pair of Region Free, BD50 discs sit comfortably on opposing panels and are housed inside a blue, eco-vortex case with a lightly embossed, glossy slipcover. At startup, the disc commences with skippable trailers before switching to a menu screen with the standard options, music playing in the background and full-motion clips.

Killmonger sets his eyes on the Blu-ray throne with an enthusiastic and stunningly gorgeous 1080p/AVC MPEG-4 encode, a picture that is continuously brimming with color and an infectious exuberance. Practically every scene is beaming with a radiant parade of primaries, from the lush greens of the surrounding foliage and passionate reds in the Dora Milaje's uniform and the neon lights of the city to the scenic blues of the lovely skies. The video is also awash in a striking array of vivid secondary hues, such as the pinks, yellows, oranges, and purples in the clothing while Shuri's outfits and tech lab tend to dazzle. Rachel Morrison's marvelous photography also enjoys pitch-perfect contrast, displaying dramatically crisp, brilliant whites in some of the makeup, the walls of certain rooms and in the splendid fluffy clouds of the sky.

Added to that, black levels are absolutely luxurious and inky rich throughout with succulent, dark shadows during nighttime sequences that never obscure the finest details, providing the 2.39:1 image with an awesome cinematic, three-dimensional quality. In fact, the presentation offers some of the best brightness levels we've seen in a long time on home video, and several scenes are sure to become demo material, with the South Korea street chase probably taking the top go-to spot. Even in the darkest, blackest portions of the frame, viewers can still make out the sharp, distinct lines of the cars, buildings, and streets. Daylight exteriors offer lovely panoramic shots of the landscape, exposing every blade of grass, the leaves in trees and uniquely ornate architecture of Wakanda. Facial complexions are highly revealing and lifelike while the fine stitching in the clothing is clear-cut, making this HD presentation a feast for the eyes.

As is now common practice in pretty much all Disney home video releases, the original audio design has been reconfigured into a near-field home theater mix, and the results are somewhat disappointing though overall, still good and generally satisfying. As with other recent Blu-ray titles from the studio, this DTS-HD Master Audio 7.1 soundtrack will have to be played louder than usual, and in my system, I listened at reference level and could have probably gone even louder without issue or protest.

Weirdly, it seems as though engineers placed a great deal of emphasis across the front soundstage with practically all the action sequences spread evenly among the three front channels. Granted, the mix appreciably establishes a broad and welcoming soundscape, as various effects discretely and flawlessly move from left to right of the screen and vice versa. However, the visuals are sadly neither engaging nor particularly noteworthy, partially due to the low volume but also because the mid-range largely feels limited and quite narrow. Certain peak frequencies noticeably stop or feel suddenly cut off when the action would expectedly be the loudest, layered with the high-pitched noise of metal being crushed but are completely missing, making the South Korea car chase, unfortunately, feel relatively flat and unexciting to some extent.

With the design now mostly concentrated among the fronts, which could be argued as either positive or negative depending on one's audio system, the rest of the room is much quieter than would be expected for such an action-packed blockbuster. The surrounds and rears are rarely put to work, which is shocking given some the visuals where certain atmospherics should move to either side of the listener. To be fair, there are a couple moments when a sound effect, such as the Wakandan flying machines or one stampeding rhino runs to the back of the room, nicely pans to the other channels, but such moments are far and few between while also feeling somewhat forced and distractingly localized. All in all, the surrounds are fairly quiet, and this lossless mix sort of fails to really provide a worthwhile or decently immersive soundfield.

On a positive note, the dialogue is heavily prioritized and easily draws the listener's attention. So much so, the argument could be made that engineers reconfigured the original design for this sole purpose — loud, distinct vocals but significantly quieter action. The low-end can also be quite aggressive and room-energizing at times, but as with everything else in this mix, it's doesn't stand out and isn't especially noteworthy. Bass is best appreciated during the music, song selections and in the Wakandan aircrafts, occasionally hitting as low as 13-15Hz (bass chart), which is really nice. But overall, the action sequences are rather lacking or don't really deliver the sort of wall-rattling punch the visuals seem to imply, such as Klaue's sonic gun in what should be the most sonically aggressive South Korea car chase sequence

Overall, the DTS-HD MA track is basically a mixed bag, better suited for those listening on a soundbar, television speakers or in a limited environment, such as an apartment. Others will probably be disappointed with the results.

All the same supplements are shared with its day-and-date 4K counterpart, which can be read in more detail in our 4K Ultra HD Blu-ray review HERE.

Layered with several complex, thought-provoking ideas that will have audiences talking long after the film's end, Ryan Coogler's Black Panther is a highly-engaging and thrilling superhero film, energized by stunning visuals, jaw-dropping action and fantastically memorable performances by the entire cast. In tackling important issues about globalization, colonization, the unfortunate lasting legacy of America's history with slavery and, most notably, black identity in the 21st Century, the 18th installment in the Marvel Cinematic Universe is arguably the best entry in the entire series, if not the genre as a whole.

The battle for Wakanda erupts on Blu-ray with a reference quality HD video presentation sure to provide fans with plenty of demo material, but sadly, the DTS-HD MA soundtrack is somewhat disappointing and lackluster given the many stunning visuals throughout. With a small but worthwhile set of supplements, the overall package is nonetheless is recommended for fans of the film and for completing one's MCU video library.