Return of the Living Dead Part II is an oddball rehash of its predecessor, but it fully embraces its comedic aspects and goes full-tilt, over-the-top ridiculous with one clownish gag after another. To some, the sequel is better forgotten and downright awful, but for others, its awfulness and zany assortment of zombies is entertaining enough to make it a cult favorite. Celebrating its 30th Anniversary, Scream Factory exhumes the movie from its grave with a fantastic HD video presentation and a terrific DTS-HD MA stereo soundtrack. Sporting a new collection of supplements, the overall package is Recommended for cult enthusiasts.

After twenty years, I'm still a little sore from missing Return of the Living Dead Part II in theaters. Well, I might be exaggerating a bit there, but as a huge fan of Dan O'Bannon's cult classic, it sometimes crosses my mind when watching the movie. I had to wait the following year on VHS to discover how hilariously bad and brain-dead this sequel is. And in spite of its stupidity, the movie is oddly entertaining in a very bizarre and wacky kind of way, tossing out one outlandish, unexpectedly zany joke after another. Some of the best moments come from Doc Mandel (Phil Bruns) and his reaction to events happening around him, especially his witty one-liners when we're first initially introduced to him in his garage. After that, he spends the rest of the movie being the fortuitously inebriated doctor chaperoned around town by teens and never bothering to make much sense of the obvious zombie epidemic. Bruns brings an out-of-place classic Hollywood comedic energy to an otherwise absurdly ridiculous story about the dead returning to terrorize small town suburbia.

Those aforementioned teens are the precociously smartass Jesse (Michael Kenworthy) and his babysitting sister Lucy (Marsha Dietlein). The two are the epitome of 80s siblings, bickering and arguing like only brothers and sisters can. And the two actors provide surprisingly convincingly performances, as the older locks the younger in his bedroom or Jesse cynically remarks at Lucy with a funny, "are-you-blind?" snarky glare. Their interaction arguably isn't as funny as Jesse being taunted by his zombified bully, Billy (Thor Van Lingen), who spends most the movie looking as though he just rolled off the bed. The joke there, however, is pretty sly and clever — even in death, our little pint-sized hero is (literally) haunted by his tormentors. Meanwhile, Lucy faces her first-world problems unsure of her feelings for the cable guy Tom (Dana Ashbrook), which sounds like the beginning of a horror-themed porn movie. Just a couple years shy of making it big on Twin Peaks, Ashbrook does great as the inadvertent hero, quick on his feet decision-maker with a fantastic charm that's perfect for B-movies. 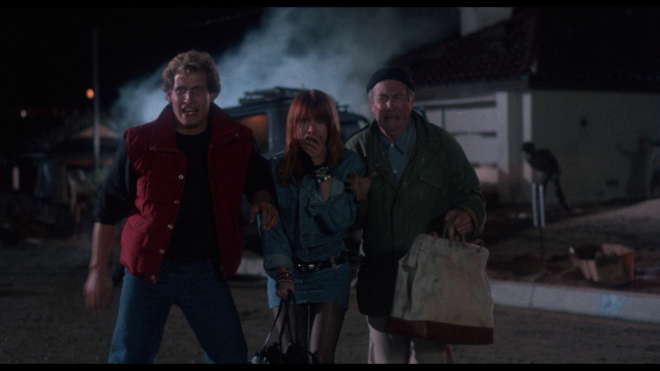 The real stars of this modestly-budgeted production, however, are James Karen and Thom Mathews as a pair of dimwitted graverobbers, Ed and Joey. Other than the military chemical sludge called Trioxin that floats like a fluorescent green fog into a nearby cemetery, Karen and Mathews are the only connection to the first movie, and writer-director Ken Wiederhorn takes great advantage of this by sprinkling a good chunk of the story with several self-referential meta gags throughout. The two actors are essentially reprising their roles as the experienced supervisor teaching the new hire the ropes of a job that profits from the dead, and the bumbling dolts are made to go through the process of dying all over again while Joey's girlfriend Brenda (Suzanne Snyder, looking a lot like shopping mall singing sensation Tiffany) hilariously watches in horror only to end up being his spicy dinner. Just as they did before, the two actors play off each other with splendid comedic timing and rhythm, like a pair of clowns stumbling from one situation to the next as though unplanned or unrehearsed.

By the end of this lively and deadly night though, Return of the Living Dead Part II will ultimately be remembered and enjoyed for its silly but oddly creepy assortment of goofy zombies, from a talking grumpy head to corpses stupefied by an aerobics video. For me, the first thought that comes to mind when watching this hilariously dumb sequel is the anticipation of seeing the "Thriller" zombie towards the end, which is both a compliment and a facepalm disapproval. Part of its awfulness is the deliberately-edited shot taking a second to allow the actor to cautiously walk into the frame before pretending to be electrocuted. It's that sort of intentionally that makes the movie funny. I often wonder if the filmmakers also intended for the Army trucks to drive through the same downtown block as in Halloween II or if ripping the lower jaw of the church zombie is an homage to Day of the Dead or if Doc Mandel's cherry red 1959 Cadillac is a subtle nod to A Nightmare on Elm Street. Of course, I could be stretching, but in a movie like this, it's a possibility and part of the fun.

Shout! Factory exhumes Return of the Living Dead Part II from its grave for Blu-ray as a single-disc Collector's Edition under the distributor's Scream Factory line. The BD50, Region A locked disc is housed in the standard blue case with brand new reversible cover art and a cardboard slipcover. At startup, the disc goes straight to the standard main menu with a static graphic on the left side and menu options along the bottom. The rest of the screen shows full motion clips while the musical score plays in the background.

The dead return to demolish suburbia with a great-looking, nicely-detailed 1080p/AVC MPEG-4 encode. Struck from a brand-new 2K scan of the best available interpositive print, the cult film has never looked better, revealing every nook and cranny in the background. The fine lines and stitching are very well-defined, and the absurdly gory makeup is distinct throughout. Close-ups are highly revealing with lifelike textures. The video isn't always perfect with a few soft spots here and there, but it looks great overall.

The presentation is also full of life thanks to a surprisingly vibrant and animated selection of primaries with reds and greens, in particular, oozing with spirit and enthusiasm. Secondary hues are equally dynamic and electrifying, providing some rosy and healthy-looking complexions in the living while the dead appear . . . well, less appealing. Contrast is nicely improved, as well, with crisp, radiant whites from beginning to end, but it still falls on the lower end of the grayscale, producing a somewhat flat 1.85:1 image. Black levels are shockingly inky-rich and full-bodied with excellent shadow detailing during the many nighttime sequences, but a few poorly-lit interiors lose a bit of the luster.

Rising from their graves, the dead get down and boogie with an electrifyingly good DTS-HD Master Audio 2.0 Stereo soundtrack. Remaining faithful to the original design, the lossless mix delivers a broad spatial presence that feels natural and welcoming while off-screen background activity, such as the moans of zombies in the distance, the chatter of soldiers and the sounds of chaos, is discrete and convincing. The mid-range is surprisingly dynamic, providing the action with distinct clarity and detail although the rocking song selection doesn't really benefit much, likely related to the original design than a deficiency in the DTS-HD track. The design also lends itself splendidly well when applying the receiver's Dolby Surround or DTS: Neural:X up-mixing functionality, subtly spreading many of those atmospherics into the overheads and surrounds. Low bass isn't particularly impressive, but it's accurate and hearty low-end for providing the electrifying action with some appreciable weight. Amid the goofy zombie mayhem, vocals remain clear and precise throughout so that we can hear every corny and hilariously deranged bit of dialogue.

Return of the Living Dead Part II is an oddball rehash of its predecessor, but it fully embraces its comedic aspects and goes full-tilt, over-the-top ridiculous with one clownish gag after another. To some, the sequel is better forgotten and downright awful, but for others, its awfulness and zany assortment of zombies is entertaining enough to make it a cult favorite. Celebrating its 30th Anniversary, Scream Factory exhumes the movie from its grave with a fantastic HD video presentation and a terrific DTS-HD MA stereo soundtrack. Sporting a new collection of supplements, the overall package is recommended for cult enthusiasts and makes a great addition to the library.

Sale Price 22.99
List Price 34.93
Buy Now
3rd Party 17.85
In Stock.
See what people are saying about this story or others
See Comments in Forum
Previous Next
Pre-Orders
Tomorrow's latest releases