The Return of the Living Dead: Collector's Edition

Writer/director Dan O’Bannon (Alien, Lifeforce) puts an uproarious spin on the zombie apocalypse movie in 1985’s cult classic The Return Of The Living Dead, starring Clu Gulager (A Nightmare on Elm Street 2: Freddy's Revenge), James Karen (Mulholland Drive) and Don Calfa (Weekend at Bernie’s). Considered one of the campiest undead romps of its time, the film helped launch the career of scream queen Linnea Quigley (Night of the Demons, Sorority Babes in the Slimeball Bowl-O-Rama) and features a killer soundtrack with tracks from many songs from punk artists such as The Cramps, T.S.O.L. SSQ and 45 Grave.  This collector's set includes a brand new 2K scan of the film and over 12 hours of extras!

Twenty years before 'Shaun of the Dead' made audiences scream and laugh at the sight of reanimated corpses, 'Return of the Living Dead' paid tribute to the horror craze surrounding George Romero's 'Dead' films. That same year would also see Romero direct his most gruesome feature in the series, 'Day of the Dead.' The title alone is a loving salute to the original drive-in feature, as is the fact that the production initially began as an adaptation of John A. Russo's book. Early on in the movie, filmmakers even take a quick minute to acknowledge the movie's inspiration, both as a "tip of the hat" to the seminal 1968 zombie classic and to cleverly get the obvious reference out of the way.

In that same scene, it's Freddy's (Thom Matthews) first day on the job at the Uneeda medical supply warehouse where he works with cadavers, and his supervisor, Frank (James Karen), wants to scare the living poop out of him. He tells the gullible kid that 'Night of the Living Dead' was based on a true story about the gas 245-Trioxin leaking in a hospital in Pittsburgh. Having Freddy within his grasp, Frank then tells him one of the corpses is in the basement below and shows it to him when they are suddenly exposed to the gas. It doesn't take long before they realize what happened and the Trioxin leaks into the cemetery next door, where Freddy's punk-rock friends are waiting for him. Soon, they barricade themselves inside a mortuary and are surrounded by hundreds of reanimated corpses.

In the hands of Dan O'Bannon, the mind behind 'Alien' and 'Total Recall,' and with permission to rewrite the script, the movie does more than simply swoon over Romero's films. Making his directorial debut, O'Bannon changes the whole of the story and takes a huge leap forward. He pummels audiences with copious amounts of hilarity and slapstick, as well as buckets of gore and bloody carnage. He also gives genre fans sentient zombies that can talk, hunt as a pack, and run at you at full speed. The only way to really get rid of these corpses is to chop them up into little pieces, put them into separate garbage bags, and cremate those suckers. That is, if you have an embalmer for a friend with an available crematorium. That, or just napalm the city and call it a day. Either way works, really. 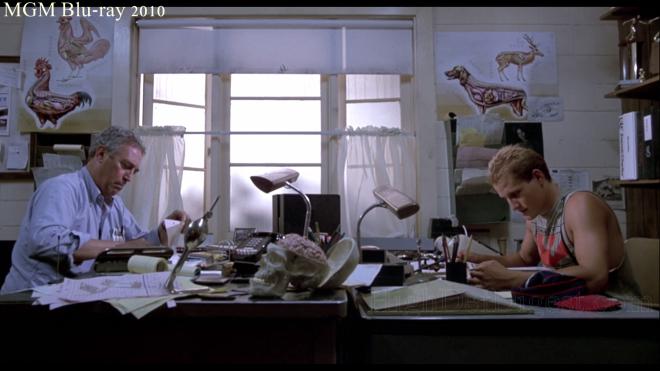 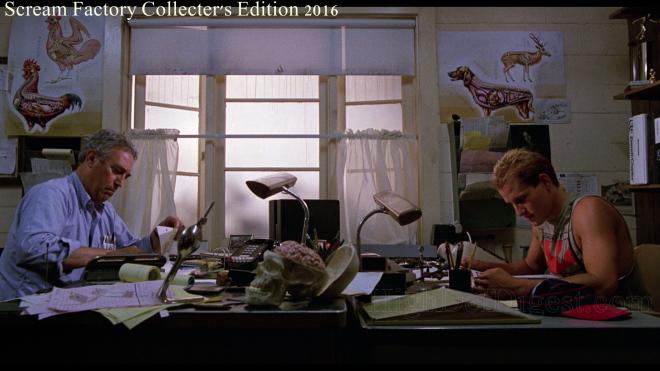 Rather than merely chalking up 'Return of the Living Dead' as a horror comedy, this very awesome 80s gem of my youth is really all horror, full of some great freaky moments. Simply think of it as a bloodcurdling zombie feature with a twisted and ghoulish sense of humor — pathological even as the graphic violence seems endlessly hilarious. If you're not laughing at a naked, frozen cadaver sprinting towards a screeching Burt (Clu Gulager) or Freddy discovering that movies lie about how to kill zombies, then surely you'll chuckle at reanimated corpses chanting "brains" or roll your eyes when Suicide (Mark Venturini) gives his short soliloquy about his look being a lifestyle.

As a first-time helmer, O'Bannon doesn't do anything that stands out visually, but he's efficient and effective, and his talents really lay in the storytelling. His best moments behind the camera — as fans are sure to agree — are with Tarman (Allan Trautman) using a winch to break Tina (Beverly Randolph) out of a locker. Personally, I can't get enough of the cemetery scene. No, not the one with Trash (Linnea Quigley) dancing on top of a crypt. The one with the corpses rising from their graves as 45 Grave's "Partytime" suddenly blasts through the speakers. And the midget zombie is a great, bellyaching highlight. In the end, this is one of the best send-ups to Romero's 'Dead' films ever devised, and it continues to generate laughs today.

Shout! Factory beckons 'The Return of the Living Dead' to Blu-ray as a Two-Disc Collector's Edition under the distributor's Scream Factory line. Two BD50, Region A locked discs — one containing the film, the other a brand-new set of supplements — are housed in the standard blue case on opposing panels with brand new reversible cover art and a cardboard slipcover. The folks at Scream have also thrown together another limited deluxe edition that contains two posters and a second slipcover with new artwork. At startup, the disc goes straight to the standard main menu with a static graphic on the left side and menu options along the bottom. The rest of the screen shows full motion clips while the musical score plays in the background. 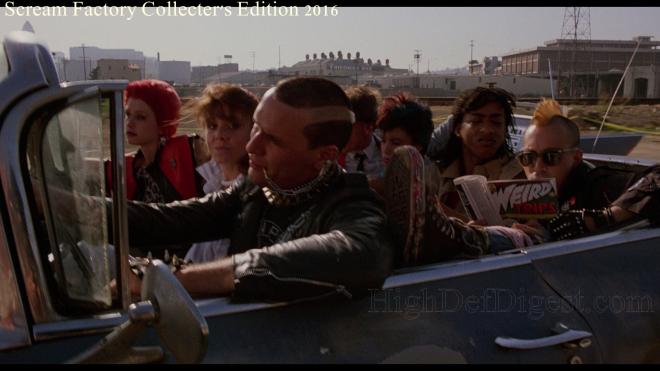 The dead return to the living with a nicely improved and generally satisfying 1080p/AVC MPEG-4 encode that was made from a new 2K scan of the interpositive. A few versions of the cult comedy have been to released over the last couple decades with slightly varying results, but the folks at Scream Factory have outdone them all, delivering the best video presentation of the movie yet. Granted, the picture quality won't compare to others of the same area, still looking very much like the product of its time. But much of that is easily chalked up to the film stock, the cinematography and the condition of the source, which actually is great condition, all things considered. In the end, the zombie favorite looks fantastic and should please fans.

In spite of a good chunk of it showing its age, fine object detailing is a tad stronger here with better resolution, and there's plenty of good textural definition in the several close-ups, especially in the oozing special effects of the walking dead. And some shots look softer and blurrier than others, but they seem inherent to the original photography and thus, are forgivable. Several instances make it obvious the picture has been cleaned up considerably, but a nice thin layer of grain washes over the 1.85:1 image, giving it an attractive film-like quality. Contrast is noticeably brighter and lacking the dirty yellowish hue of the previous release, allowing for greater visibility of the random items decorating the background. Black levels alternate in a few spots, but overall brightness is deeper with better shadow detailing throughout. The biggest and most noticeable improvement comes by way of the color palette, providing the video with brighter and more polished primaries than before and making this the best the cult horror comedy has ever looked. 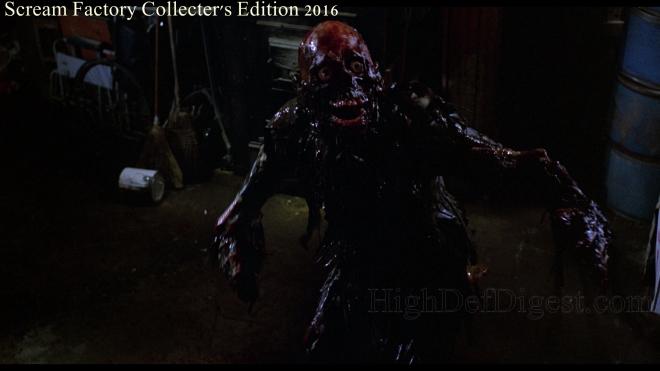 Much like the video, the folks at Scream Factory try to remain as faithful as possible to the original audio recording, and they actually put the effort to fix some issues evident in the MGM release. To make the choice easier for disgruntled owners, producers provide three listening options with the first DTS-HD MA mono soundtrack being the one fans will immediately gravitate towards. The original voices of Tarman and the zombie picking up the police radio are finally back! Unfortunately, The Damned's song, "Dead Beat Dance," is still missing, likely due to some rights issue. Nevertheless, this track trumps other home video editions of the past, displaying a fuller and broader soundstage. At times, imaging feels somewhat restrained to the center, but the lossless mix exhibits a better sense of presence and excellent detailing in the mid-range, providing every manic action sequence and the music with great clarity and warmth. Low bass is accurate and responsive with appreciable weight during certain songs and scenes.

The other two listening options are the same DTS-HD mono soundtrack heard in the previous Blu-ray and a brand-new lossless surround sound mix. To my surprise, I actually like and prefer the latter over the former, in spite of the zombie voices having been changed. But I'm only referring to how this track compares to the altered mono version, not the original recording, which, of course, will always be first choice. So, in this 5.1 track, the mid-range displays a bit more clarity and quite dynamic with clean separation of various frequencies. Just as before, the low-end is fairly deep and weighty without feeling exaggerated, and dialogue is clean and intelligible in the center. Although the design remains a front-heavy presentation, many a times, the room comes alive with the terrifying moaning sounds of the dead moving to the side speakers and across the entire soundstage. Ambient effects are discrete and precise with excellent directionality, creating an amusingly satisfying soundfield, and the music also takes advantage of the upgrade by effectively bleeding into the other channels and keeping viewers engaged. 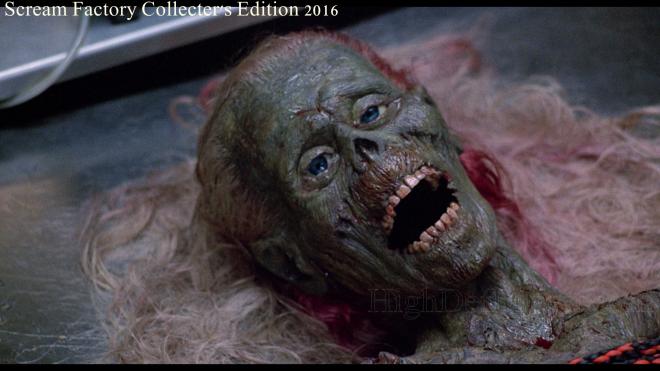 'Return of the Living Dead' is one of the best zombie features balancing a perfect mix of comedy and horror. With Dan O'Bannon's rewrites and direction, the movie pays tribute to Romero's 'Dead' films for starting the genre craze, but suddenly leaps forward to do its own thing as a wild and crazy gorefest. The Blu-ray from Scream Factory arrives with improved picture quality and an even better audio presentation that was made from the original recording. Offering new, recently-recorded set of supplemental material, this high-def package is definitely one hardcore fanatics and completists will want it for their collection.

Sale Price 72.96
Buy Now
3rd Party 84.99
In Stock.
See what people are saying about this story or others
See Comments in Forum
Previous Next
Pre-Orders
Tomorrow's latest releases