In the 1920s, Tennessee schoolteacher Bertram Cates (Dick York) is put on trial for violating the Butler Act, a state law that prohibits public school teachers from teaching evolution instead of creationism. Drawing intense national attention in the media with writer E. K. Hornbeck (Gene Kelly) reporting, two of the nation's leading lawyers go head to head: Matthew Harrison Brady (Fredric March) for the prosecution, and Henry Drummond (Spencer Tracy) for the defense.

The infamous Scopes Monkey Trial pitted two legendary attorneys - Clarence Darrow and William Jennings Bryan - against each other in a heated clash over Charles Darwin's theory of evolution. Darrow defended the scientific evidence that proves man directly descends from the apes, while Bryan promoted the religious idea of divine creation. Famed journalist H.L. Mencken covered the 1925 trial, which garnered an inordinate amount of publicity and later became fodder for a hit Broadway play. Inherit the Wind ran for more than 800 performances, won Tony Awards for actors Paul Muni and Ed Begley, and captured the fancy of producer-director Stanley Kramer, a champion of films with socially relevant topics.

Kramer's vital 1960 screen adaptation pairs two-time Oscar winners Spencer Tracy and Fredric March, who contribute fiery performances in a timeless movie that advocates truth and integrity while denouncing bigotry and ignorance. Tracy plays the Darrow counterpart, Henry Drummond, while March portrays his flamboyant adversary, Matthew Harrison Brady. Gene Kelly, in a rare dramatic turn, makes a solid impression as cocky journalist E.K. Hornbeck. Though the film takes many liberties with the actual trial and the events swirling around it, it incisively transmits its potent message.

Nominated for four Academy Awards, including Best Actor (Tracy) and Best Screenplay, Inherit the Wind was a box office disappointment at the time of its premiere, but as the years passed, its reputation increased as audiences began to appreciate its relevant themes, quality direction, and magnetic portrayals. In 2014, Twilight Time released a limited Blu-ray edition of the film, but lucky for us, when its rights expired, Kino Lorber picked them up. Reviews of the disc's video and audio transfers and supplements are included below. For a complete film review of Inherit the Wind by my colleague Daniel Lee, click here. 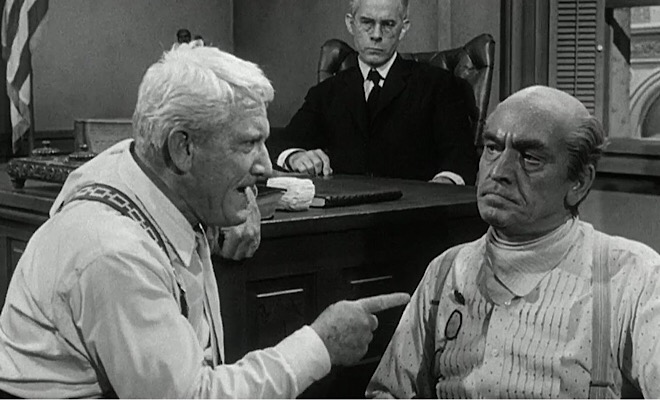 The Kino edition of Inherit the Wind arrives on Blu-ray packaged in a standard case. Video codec is 1080p/AVC MPEG-4 and audio is DTS-HD Master Audio 2.0. Once the disc is inserted into the player, the static menu with music immediately pops up; no previews or promos precede it.

This looks to be the exact same transfer that was included on the previous Twilight Time Blu-ray release, and that is good news. Crisp, clean, and featuring a natural grain structure that provides a lovely film-like feel, this 1080p/AVC MPEG-4 rendering beautifully honors Ernest Laszlo's Oscar-nominated cinematography, which brims with fine detail and a palpable sense of depth. Deep, inky blacks and bright, well-balanced whites anchor the image, while nicely varied grays supply necessary texture. Razor sharp close-ups showcase all the wrinkles and crevices in Tracy's weathered face, along with the pores, freckles, blemishes, and beads of sweat on all the other actors. The resolution is so good, you can even make out the line of March's bald cap in several shots. Costume fabrics show up well, even delicate patterns like pinstripes remain rock solid, and just a hint of crush can be detected. Though a bit of print damage occasionally crops up, the bulk of the source material appears spotless. Sometimes it's best to leave well enough alone, and Kino wisely recycles this superior transfer, which presents Inherit the Wind in the best possible light.

The Twilight Time release featured a DTS-HD Master Audio 1.0 track, but the mono sound here is presented in DTS-HD Master Audio 2.0. Nicely balanced yet featuring limited dynamic range, the talky track focuses firmly on the all-important dialogue, which is always clear and easy to comprehend. Sonic accents like shattering glass and the pounding of the gavel are distinct, and Ernest Gold's sparse music score, which is largely comprised of variations on the Give Me That Old-Time Religion theme (sung initially by Leslie Uggams), fills the room with ease. No distortion creeps into the mix, and no age-related hiss, pops, or crackles intrude. Though not a powerful track, this transfer does its job with a minimum of fuss, which is about all we can ask of it.

Though Kino does not include the isolated music and effects track from the Twilight Time release, the studio does provide a brand new audio commentary for this edition.

Audio Commentary - Filmmaker and historian Jim Hemphill is a self-confessed "Stanley Kramer disciple," and in this thoughtful and well-delivered commentary he continually expresses his admiration for the director. He calls Inherit the Wind a "masterpiece," "possibly Kramer's best film," and "one of the great American films of all time." Over the course of his discussion, Hemphill talks about the differences between the actual Scopes trial and this somewhat fictionalized adaptation, the friendly rivalry that existed between Tracy and March on the set, and how the film could be interpreted as an allegory for the Hollywood blacklist. He relates bios of many cast members, touches upon Tracy's chronic alcoholism, praises Kramer's underrated directorial style and bemoans how critics have lambasted his work, mentions several Inherit the Wind remakes, and even points out connections between Donald Trump and the Matthew Brady character. Unfortunately, Hemphill's passion for Kramer gets the better of him, as he devotes the final hour of the commentary almost exclusively to the director. Though his in-depth report on Kramer's life and career is often fascinating, I would have preferred an abbreviated version to allow more time for discussion about the specifics of Inherit the Wind. Nevertheless, this is still a highly worthwhile track that enhances appreciation for what Hemphill terms a "weirdly underrated" film.

Theatrical Trailers (HD, 18 minutes) - In addition to the original preview for Inherit the Wind, trailers for four other Stanley Kramer productions released by Kino are provided: Not as a Stranger, Judgment at Nuremberg, On the Beach, and A Child Is Waiting.

If you weren't able to snatch up a copy of the Twilight Time limited edition of Inherit the Wind before it sold out, now is your chance to right that wrong. Kino's re-release preserves the top-quality video transfer and solid audio, while adding an absorbing commentary track that provides some welcome perspective on this classic film. The thespian fireworks between Spencer Tracy and Fredric March as two attorneys sparring over Darwin's theory of evolution remain spectacular, and Stanley Kramer's reverence for the material and its resonating message make this one of his best and most enduring films. If you love great acting and substantive topics, Inherit the Wind is a can't-miss movie. Highly Recommended.

Sale Price 16.44
List Price 29.95
Buy Now
3rd Party 12.44
In Stock.
See what people are saying about this story or others
See Comments in Forum
Previous Next
Pre-Orders
Tomorrow's latest releases