A Child Is Waiting

Psychologist Dr. Matthew Clark is the head of the Crawthorne State Training Institute, one of the first boarding schools for developmentally challenged children. Dr. Clark is sympathetic ...

The plight of mentally challenged children and the difficult emotional and bureaucratic hurdles facing their parents and the teachers who educate and care for them hardly sounds like a commercial film topic, let alone an entertaining one. Yet such daunting roadblocks never fazed producer Stanley Kramer, whose unwavering commitment to exploring important and controversial social issues spawned some of Hollywood's most perceptive and thought-provoking motion pictures. 'A Child Is Waiting' stands as one of his lesser-known works, largely due to its uncomfortable subject matter and poor box office reception, but such factors can't diminish the story’s power or its sensitive, affecting treatment by director John Cassavetes. Give this offbeat film a chance and you’ll quickly feel an affinity toward the precious children who populate it, better understand their limitations and potential, and come away with renewed respect for both their capabilities and the selfless instructors who work tirelessly in pursuit of a single goal - to help them live a productive, fulfilling life.

Unlike those exploitative disease-of-the-week TV dramas that flooded the airwaves back in the 1970s and 1980s, ‘A Child Is Waiting’ isn’t some syrupy, sentimental, pity-mongering public service announcement masquerading as a movie that shamelessly strives to drum up sympathy for a gaggle of unfortunate victims. On the contrary, Cassavetes’ film is often blunt and tough to watch, because it taps into feelings and depicts situations we prefer not to confront, but its well-intentioned, sincere, and largely realistic presentation softens the blows without dulling their impact. Though educational practices have changed in the 50-plus years since the movie was produced, and special schools (dare we call them institutions?) for mentally handicapped children are far less prevalent, the film’s themes and their emotional underpinnings remain relevant and relatable. Such issues as lack of funding, teacher training, parental denial, shame, and neglect, and the isolation, pain, and confusion many of the children feel are insightfully depicted by Cassavetes and screenwriter Abby Mann (‘Judgment at Nuremberg’), both of whom aren’t afraid to express their strong views about what was then referred to as mental retardation.

As the film opens, Jean Hansen (Judy Garland) seeks employment at the Crawthorne State Training Institute, a New Jersey boarding school for mentally handicapped children. A lost, troubled soul who has dabbled in various careers, Jean hopes working with disabled children will bring fulfillment and meaning to her empty life. The school’s stern yet nurturing director, Dr. Matthew Clark (Burt Lancaster), gives her a chance despite her lack of experience, but when Jean becomes overly attached to Reuben (Bruce Ritchey), a young boy with less obvious symptoms (he would be classified as autistic today), Dr. Clark expresses concern, believing Jean’s overt coddling of Reuben will stunt his development and harm his psyche.

Jean, however, disagrees. She objects to Dr. Clark’s tough love approach, which she feels is too severe, and believes greater compassion and more intimate involvement better serve the students. As the two butt heads over how best to connect with the children, her continued interference in Reuben’s life leads to a difficult confrontation with the boy’s troubled mother (Gena Rowlands) that may jeopardize Jean’s future and do Reuben more harm than good.

Cassavetes, directing only his third feature, bravely casts an array of actual handicapped children, who infuse the story with a poignant realism it otherwise would have lacked. (A few of the kids, including Ritchey and a pre-‘Lost in Space’ Billy Mumy, are professional actors, but most are true disabled children.) And to his credit, Cassavetes doesn’t use them as window dressing. Rather, he focuses on them intently, often in lingering close-ups, allowing us to see their individual personalities and the inherent sweetness that radiates from within. Their spontaneity keeps the adult actors on their toes and lends the film an edgy, semi-documentary feel that offsets some of the script’s contrivances. Like many agenda-driven social issue movies, ‘A Child Is Waiting’ feels obligated to try and educate its audience, spouting statistics and pointing out the commonality of mental disabilities - at one point, an exasperated Dr. Clark tells the school's ignorant board of directors “it” even happened to “a sister of the President of the United States!” (referring to Rosemary Kennedy) - but thankfully such occasions are rare.

Lancaster and Garland both felt passionately about the subject matter and jumped at the chance to appear in the film, despite its limited appeal. Both file sensitive, understated performances, but the work of Garland, in her penultimate movie, especially resonates. As a lonely woman who perhaps needs the children more than they need her, she transmits an authentic vulnerability that’s often as wrenching to watch as the kids’ struggles. Jean is our window into this foreign environment, which we often see through her eyes, and Garland, one of Hollywood’s most intuitive actresses, makes sure we understand her perspective and motives, even if we don’t agree with them.

Rowlands and Steven Hill, as Reuben’s tortured father, are also terrific and beautifully exhibit the concern, fear, denial, incredulity, guilt, and angst that surely afflict most parents who must confront this life-altering condition and figure out how best to deal with it. The supporting cast is populated by several well-known faces in small roles - Paul Stewart, Lawrence Tierney, John Marley, Juanita Moore, and Barbara Pepper chief among them - and they all make strong impressions.

At times, ’A Child Is Waiting’ looks a bit ragged - its editing can be choppy and some of the cuts don’t match - but such imperfections strangely heighten its impact. Most importantly, this earnest film honors its topic with dignity and shines a much-needed light on issues we often ignore. It may not be the most entertaining and uplifting film, but it’s wonderfully human, touching, thoughtful, and - in the best sense of the word - inspiring. 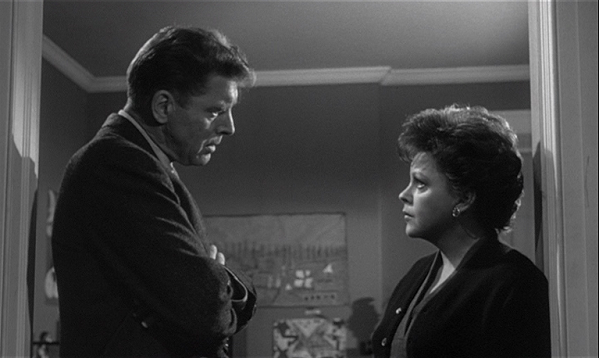 'A Child Is Waiting' arrives on Blu-ray packaged in a standard case. Video codec is 1080p/AVC MPEG-4 and audio is DTS-HD Master Audio 1.0. Once the disc is inserted into the player, the static menu without music immediately pops up; no previews or promos precede it.

According to the packaging, 'A Child Is Waiting' has been newly remastered in high definition, and the 1080p/AVC MPEG-4 transfer from Kino Lorber brings a lovely vibrancy to this aged title that it previously lacked. Shot in a natural, semi-documentary style by acclaimed cinematographer Joseph LaShelle (best known for such classics as 'Laura,' 'The Apartment,' and 'How the West Was Won'), there's plenty of stark contrast on display, as well as a predominance of intimate close-ups that convey a wealth of conflicting emotions, and the transfer's enhanced clarity, noticeable but non-intrusive grain structure, and excellent gray scale variance maximize the impact of his photography. Black levels are rich and deep, shadow delineation is quite good, and background elements are easy to discern. A few of Garland's close-ups err toward the soft side, but such technique was common for the time period, especially for middle-aged female stars. Some heavy speckling - and a few blotches - afflict the image early on, but as the movie progresses, such instances taper off. No noise or crush creep into the picture, and any digital enhancements have been nicely integrated into the whole so they escape notice. All in all, this is a very film-like, watchable transfer that serves the tender story well.

The DTS-HD Master Audio track exhibits a bit of distortion and a couple of age-related pops now and then, but is largely clean and clear. No hiss or surface noise intrudes, and the soundscape nicely opens up during exterior scenes. Atmospherics, such as classroom chatter and outdoor frolicking, blend in well, and accents like revving car engines are crisp and distinct. Ernest Gold's pedestrian music score flaunts a fair amount of presence and depth, and all the dialogue is easy to comprehend. This is a rudimentary track that handles its chores with relative ease, which is about all one can ask of it.

Downbeat yet hopeful - and often enlightening - 'A Child Is Waiting' treats the issues facing mentally handicapped children with warmth, sensitivity, and compassion. John Cassavetes' emotionally affecting film also provides a stark, inside look at their everyday travails, as well as the struggles of teachers and parents to come to terms with the reality of their respective situations. Excellent performances from Burt Lancaster, Judy Garland, Gena Rowlands, Steven Hill, and a number of fine supporting players heighten the story's impact, but it's the children themselves who really make this simple, heartfelt movie resonate. Kino Lorber's Blu-ray presentation lacks much supplemental material, but the newly remastered video and lossless audio transfers serve the film well. Though far from typical entertaining fare and occasionally tough to watch, this perceptive, tender study of a topic that's too often swept under the rug deserves our attention and earns a recommendation.

Sale Price 67.6
Buy Now
3rd Party 78.99
In Stock.
See what people are saying about this story or others
See Comments in Forum
Previous Next
Pre-Orders
Tomorrow's latest releases