Not as a Stranger

Ambitious medical student Lucas Marsh (Robert Mitchum) aspires to being a doctor with his own practice. Unable to fund his studies himself, he woos the warm, supportive nurse Kristina (Olivia de Havilland), who has the financial resources he needs for him to realize his dreams. The couple marries and moves to a small town, where Lucas works as an assistant to Dr. Runkleman (Charles Bickford). However, after a series of betrayals, Lucas is forced to face life without the help of others.

Long before the daytime soap General Hospital captivated viewers, medical dramas commanded the attention of film and television audiences, and Stanley Kramer’s brisk, all-star adaptation of Morton Thompson’s bestselling opus Not as a Stranger stands as one of the better entries in the cluttered genre. Though not particularly substantive from a clinical standpoint, this engrossing drama focuses on the rigors of med school, the exhausting regimen of a general practitioner, and how the noble yet demanding profession shapes, drives, and affects the life of one committed - albeit arrogant - physician. Gloss eclipses grit, yet Kramer, in his directorial debut, paints a detailed portrait of a doctor’s professional and personal evolution while deftly finessing the story’s melodrama.

Medical student Lucas Marsh (Robert Mitchum) may possess matinee idol looks and a respect for his chosen field that would rival that of Hippocrates, but his connections to Dr. Kildare end there. Obsessed with medicine and becoming the finest, most ethical doctor on the planet, Lucas immerses himself in his studies, and his brilliance earns him both plaudits and a reputation as an egotistical, holier-than-thou hotshot. He challenges his school's complacent faculty and questions the competence of anyone who makes the slightest mistake, including his best friend and colleague Alfred Boone (Frank Sinatra). When financial difficulties threaten his educational future, Lucas seeks a loan from his drunken, estranged father (Lon Chaney, Jr.), who not only rebuffs him, but also wonders aloud whether he would make a good physician. "It isn't enough to have a brain," he says. "You have to have a heart."

Yet like the Tin Man in The Wizard of Oz, Lucas's chest is hollow, which makes it easy for him to exploit the affections of an older hospital nurse, Kristina Hedvigson (Olivia de Havilland), who quietly pines for him and, more importantly, has saved a tidy sum of money. Lucas pursues and marries Kristina so she will bankroll the balance of his schooling, and though he is a good husband, his bedside manner is better with his patients than his wife. Their strangely sterile marriage rankles Kristina, but she accepts the fact that medicine is Lucas's true love and doesn't mind playing second fiddle. After he completes his internship, Lucas rejects the cushy life many of his money-grubbing peers pursue in favor of more rewarding work assisting a country doctor (Charles Bickford) in a rural community. Though Christina doesn't miss nursing, she wants a family to fill the void, yet Lucas's lack of interest drives another wedge between them, as does the town's rich, alcoholic, and very alluring widow, Harriet Lang (Gloria Grahame).

Though the romantic aspects of Not as a Stranger are appealing, the film really excels in its realistic depictions of the medical milieu. The screenplay by Edna and Edward Anhalt adroitly addresses the arduous training, urgent situations, moral commitment, conflicting philosophies, and mind-numbing fatigue that define the trade, while scenes chronicling office visits, emergency treatments, and surgical procedures (the film was one of the first to show an actual beating heart on screen) renew our respect for the men and women who devote their lives to caring for and healing others. Kramer isn't a particularly imaginative director, but his workmanlike style serves the material well...although the juxtaposition of raging horses bursting out of a barn with the first passionate kiss between Lucas and Harriet is laughably over the top.

The cast, which features a whopping four past Oscar winners (De Havilland, Sinatra, Grahame, and Broderick Crawford) and one future one (Lee Marvin), as well as a veritable who’s-who of Golden Age stars and character actors, keeps us engaged in the proceedings even when the narrative stalls. De Havilland dons a Swedish accent for her sincere portrayal (sadly, Ingrid Bergman was still persona non grata in Hollywood, for she would have been a far better choice for the role) and she brings both warmth and a steely resolve to Kristina that add dimension to a rather thankless part. Both Mitchum, at age 37, and Sinatra, at age 39, were way too old to play brash young med students, but their well-crafted performances almost deceive us. (Sinatra, fresh from his Best Supporting Actor Oscar for From Here to Eternity, is miscast, but nevertheless contributes fine work.) Mitchum is especially good, but his advanced age also weakens the plot point of Lucas marrying an older woman (in reality, he and De Havilland were only a year apart), thus lessening some of their relationship’s dramatic tension.

As Lucas’s med school mentor, Crawford files a restrained yet colorful portrayal, and the always fascinating Grahame, who sadly doesn’t appear until well into the film’s second half, brings surprising sensitivity and a world-weary cynicism to the jaded Harriet. Chaney also makes a strong impression in his single scene, and Marvin (who would win a Best Actor Oscar for Cat Ballou a decade later), Harry Morgan (of Dragnet and M*A*S*H fame), Juanita Moore (who received an Oscar nomination for Imitation of Life a few years later), Mae Clarke (the woman who had a grapefruit smashed in her face by James Cagney 25 years earlier in The Public Enemy), Jesse White (TV’s Maytag repairman), and Virginia Christine (who played Mrs. Olsen in a long-running series of Folger’s coffee TV commercials) pop up in small parts. Eagle eyes will also spot a grown-up Carl “Alfalfa” Switzer  of Little Rascals fame and Nancy Kulp, who played the prim Miss Hathaway in TV’s The Beverly Hillbillies, in brief bits.

Not as a Stranger was a huge box office success at the time of its release, but its renown has faded over the past six decades. Though it rushes to its rather pat conclusion and lacks the depth of more contemporary medical dramas, Kramer’s film remains both substantive and entertaining. Doctors really haven’t changed much over the years, and Not as a Stranger - beneath the romantic trimmings - perceptively examines their demanding profession and the character traits that mold, fuel, and often torture them. It’s definitely worth a second look. 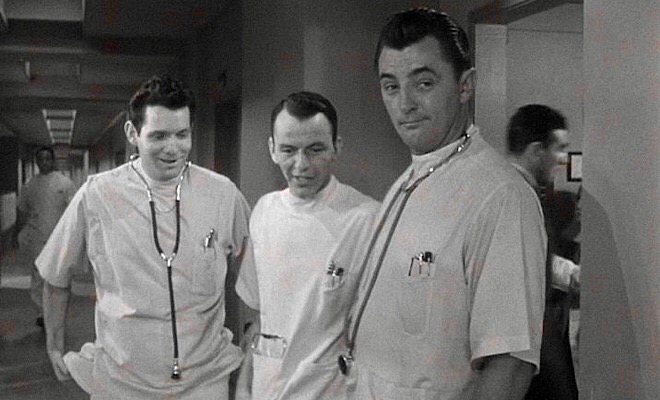 Not as a Stranger arrives on Blu-ray packaged in a standard case. Video codec is 1080p/AVC MPEG-4 and audio is DTS-HD Master Audio 2.0 mono. Once the disc is inserted into the player, the static menu with music immediately pops up; no previews or promos precede it.

Not as a Stranger nabbed an Oscar nomination for Best Sound Recording (the only nod the film received), but the DTS-HD Master Audio 2.0 mono track doesn't always honor Watson Jones' work. Though faint, surface noise occasionally crops up, lending the audio an antiquated feel, and the dynamic scale often struggles to contain the soaring strings of George Antheil’s music score. Otherwise, the sound is clear and well modulated. Subtle effects in the operating room are crisply rendered, while accents like shattering glass wield the appropriate impact and all the dialogue is well prioritized and comprehendible. All in all, this track handles its chores well; it’s just a shame a little more restorative work couldn’t have been performed to provide a cleaner listening experience.

Audio Commentary - Affable film historian Troy Howarth sits down for an informative commentary, but the discussion becomes tedious over time, largely because the film’s production was not eventful and its themes aren’t very complex. Nevertheless, Howarth forges ahead with admirable vigor, providing in-depth biographies of almost every member of the cast and crew, including unbilled bit players. He talks about Kramer’s penchant for examining social issues, notes the appeal of medical films, analyzes the characters, and even recites author Morton Thompson’s famous - and quite intricate - recipe for roast turkey. What Howarth doesn’t do is compare the movie to the 900+-page novel upon which it is based, and cite the differences between them. Though fans of the film will certainly enjoy learning about the production personnel, they might not find too much else of interest in this rather bland discussion. While I’m a huge fan of audio commentaries, I’m not really sure Not as a Stranger merits one.

Theatrical Trailers (HD, 18 minutes) - In addition to the original preview for Not as a Stranger, trailers for four other Stanley Kramer productions released by Kino are provided: Inherit the Wind, Judgment at Nuremberg, On the Beach, and A Child Is Waiting.

One of Hollywood’s better medical melodramas, Not as a Stranger mixes romance and personal strife with issues of integrity, ego, and professional ethics as it chronicles the evolution of a passionate and committed physician. Olivia de Havilland, Robert Mitchum, and Frank Sinatra lead an accomplished cast, and Stanley Kramer handles the reins with confidence in his directorial debut. Unfortunately, Kino hasn’t lavished much tender loving care on its Blu-ray presentation, which features average video and audio transfers and slim supplements. Yet Not as a Stranger is still a fine addition to the classic high-def catalogue, and fans of the genre and its stars will surely find this engrossing drama worth a look.

Sale Price 25.99
List Price 29.95
Buy Now
3rd Party 25.99
In Stock.
See what people are saying about this story or others
See Comments in Forum
Previous Next
Pre-Orders
Tomorrow's latest releases