Just out of jail after serving time on an assault rap, Max (Gene Hackman) is headed for Pittsburgh to open a deluxe car wash. Back from five years at sea, Lion (Al Pacino) wants to hit Detroit and visit the child he's never seen. The dreams may not be glorious but you'll want Max and Lion to fulfill them, because Scarecrow, cowinner of the 1973 Cannes Film Festival Grand Prize, has a heart as big as its cross-country journey. Its hard-luck drifters drift permanently into our souls. This is due to teamwork of a high order: The moving performances of Hackman and Pacino, the sensitive direction of Jerry Schatzberg and the glowing landscape cinematography of Vilmos Zsigmond. Hit the road with these two. You'll find the trip unforgettable.

Al Pacino and Gene Hackman are two of cinema's greatest actors, and watching them play off each other in their only joint screen appearance is a bona fide treat. It's just too bad the film that brought them together doesn't live up to expectations. Though affecting moments abound in Jerry Schatzberg's Scarecrow, the meandering script and languorous pacing tests viewer patience and dulls the impact of this intriguing dual character study. The tale of two oil-and-water drifters who team up on the road and forge an unlikely bond often recalls the more renowned Midnight Cowboy, produced a few years earlier, yet it lacks that classic's raw, visceral power. The slice-of-life story may aptly depict life's unexpected twists and turns in a realistic manner, but the tedious journey doesn't yield the rewards it promises.

As Scarecrow opens, a lonely stretch of rural California pavement separates a couple of aimless vagabonds looking for a lift. The big, burly Max (Hackman) has just been released from San Quentin prison. He calls himself "the meanest son of a bitch alive," and lives up to his unsavory reputation by quickly unleashing his fiery temper on the more diminutive and sensitive Francis (Pacino), who lacks the ferocity of his nickname, Lion. Max fosters a dream of opening a car wash in Pittsburgh, and after a couple of drinks at a local bar, asks Lion to partner him in this "fool-proof enterprise." A former sailor who uses humor and goofiness to diffuse tense situations, Lion accepts the offer, but insists they stop in Detroit so he can visit the five-year-old son he has never seen.

Max grudgingly agrees to work Detroit into an itinerary that also includes a stop in Denver, where his sister resides. And so begins a bumpy cross-country odyssey peppered with trials, tribulations, and more than a bit of transformation and self-discovery. All the while, this hasty business partnership spawned from mutual need and desperation slowly evolves into a close, codependent friendship that's rockier and more volatile than a passionate romance. A couple of women fleetingly wander into their lives, but the dalliances don't deter Max and Lion from the path to Pittsburgh, where the two misfits hope to forge a more calm and predictable life. Yet whether Lion can tame the wild Max before his fragile spirit gets mauled remains an open and probing question.

Scarecrow typifies early 1970s filmmaking as it juxtaposes grit and naturalism with visual poetry. The cinematography by Vilmos Zsigmond (Deliverance) beautifully captures the dusty landscapes, threatening skies, pastel sunsets, and seedy establishments that frame the plot, while Schatzberg focuses relentlessly on the characters' quirks and frailties, often at the expense of narrative momentum. Max and Lion's journey drags on far too long and too much dead air permeates it. The screenplay by Garry Michael White tosses in a few requisite surprises, but remains frustratingly stagnant, stalling the film's sputtering engine.

Of course, the dynamism of Hackman and Pacino keep us dialed in, and their respective contributions to this minor work cannot be underestimated. Both actors brandish different styles, but manage to find common ground, creating an offbeat chemistry that carries the film even when the story betrays them. Both enjoy showy, emotional moments, but it's the nuances and little ticks littered throughout that add resonance to their performances. Pacino made Scarecrow right after The Godfather and just before the dazzling trifecta of Serpico, The Godfather, Part II, and Dog Day Afternoon, while Hackman sandwiched the film between The Poseidon Adventure and The Conversation. Amid such well-known productions, it's no wonder the subtle, offbeat Scarecrow never gained the traction that propelled the other pictures and got lost in the shuffle at the time of its release, despite sharing the top prize at the 1973 Cannes Film Festival.

As I watched Scarecrow, I kept waiting for it to captivate me, but this intimate drama never adds up to the sum of its parts. At 112 minutes, it overstays its welcome, and on more than a few occasions I felt antsy. Road movies need to move, and Schatzberg takes too many detours that either stall the action or needlessly stretch the pair's journey. Character development remains consistent, but the metamorphosis of the two men could have been accomplished with more economy and incisiveness, which would have made for a more satisfying motion picture. With so many superior examples of '70s cinema from which to choose, it's hard to put Scarecrow near the top of the list. Some might classify it as a diamond in the rough, but I found it to be more of a dusty relic that merits attention but doesn't really belong on the shelf. Pacino and Hackman, though, are priceless. 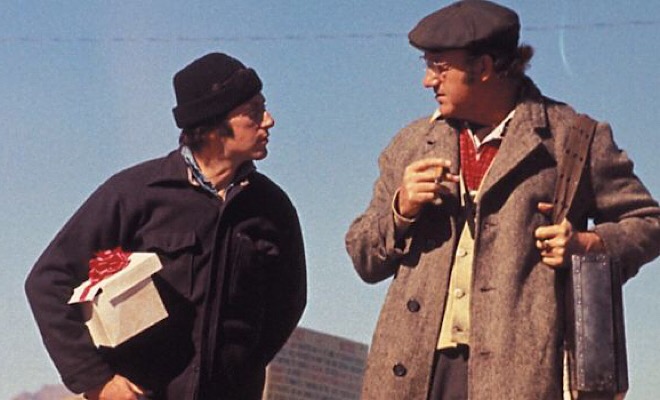 Scarecrow arrives on Blu-ray packaged in a standard case. Video codec is 1080p/AVC MPEG-4 and audio is DTS-HD Master Audio 1.0. Once the disc is inserted into the player, the static menu without music immediately pops up; no previews or promos precede it.

The lush, lyrical style of cinematographer Vilmos Zsigmond has elevated many highly regarded films, including The Deer Hunter and Close Encounters of the Third Kind, and Warner Archive salutes his fine work with a beautifully structured 1080p/AVC MPEG-4 transfer. Just the right amount of grain preserves the picture’s film-like feel while enhancing the natural, often grungy elements of various ramshackle settings. A warm glow often bathes the image, and bright colors, as evidenced by the crystal blue sky, a bold red truck, and striking green landscapes, stimulate the eye. Though flesh tones err on the rosy side and a bit of crush occasionally afflicts dark scenes, sharp close-ups highlight fine facial features, background elements are easy to discern, and deep black levels supply necessary weight to the frame. No nicks, marks, or scratches dot the pristine source material, and any digital doctoring escapes notice. Early 1970s films often flaunt a distinctive look, and this high-quality effort from Warner nicely captures and preserves it.

The DTS-HD Master Audio mono track exhibits a surprising degree of detail while supplying clear, well-modulated sound. Nuances like the whistling wind, footsteps crunching against the pavement, a blowing tumbleweed, chirping birds and crickets, and spattering grease are all crisply rendered, and a wide dynamic scale keeps distortion at bay. Intermittent bits of music, including an especially robust striptease tune, fill the room with ease, and all the dialogue is easy to comprehend. Best of all, no age-related hiss, pops, or crackles mar the purity of this impressive track.

Vintage Featurette: “On the Road with Scarecrow” (HD, 4 minutes) - Lots of silent behind-the-scenes footage and a few dramatic clips distinguish this promotional piece produced at the time of the film’s release. The sober narrator provides some plot details, compares Max and Lion to other classic pairs (such as Jekyll and Hyde and Orville and Wilbur Wright), and contrasts the acting styles of Hackman, whom he terms a “deep study,” and Pacino, whom he calls a “squiggler.”

Theatrical Trailer (HD, 3 minutes) - According to the movie’s original preview, the only difference between Max and Lion and the Rockefellers is “a few hundred million dollars and about 1,500 miles.”

Scarecrow combines elements of road and buddy films with two probing character studies, and though Gene Hackman and Al Pacino both embrace their roles and contribute very fine performances, this meandering tale of an unlikely friendship never quite gels. While some powerful scenes punch up the narrative and it’s a treat to watch Hackman and Pacino play off each other, Jerry Schatzberg’s film is often tedious, and the quirky comedy seems forced. Warner Archive’s Blu-ray presentation features strong video and audio transfers and an intriguing vintage featurette, but only diehard fans of early ‘70s cinema and the two legendary stars will find this cult curio worth a look.

Sale Price 17.99
Buy Now
3rd Party 17.64
In Stock.
See what people are saying about this story or others
See Comments in Forum
Previous Next
Pre-Orders
Tomorrow's latest releases