On a hot Brooklyn afternoon, two optimistic nobodies set out to rob a bank. Sonny (Al Pacino) is the mastermind, Sal (John Cazale) is the follower, and disaster is the result. Because the cops, crowds, TV cameras and even the pizza man have arrived.

"What you are about to see is true -- it happened in Brooklyn, New York on August 22, 1972." So are the words that preface 'Dog Day Afternoon,' and for once, the based-on-a-true-story tag is not misleading or sensational. Hollywood may have a long history with exploiting news headlines for box office, often abusing the truth and clouding history in the process, but every once in a while, a film comes along that uses a real-life incident to tell a genuinely human story with compassion and insight. 'Dog Day Afternoon' is one such movie, and one of the still-sparkling gems of the 1970s.

On that hot summer day in 1972, Sonny Wortik (Al Pacino) and two accomplices enter the First Brooklyn Savings Bank at approximately 2:57 p.m., just minutes before closing time. It was supposed to be a 10-minute bank robbery, but a series of fast-moving complications, missteps, and outright bungles end up turning it into a 14-hour siege. As the police and media descend upon the bank, the frenzy outside begins to exceed the drama inside. The story fluctuates between the frightening and the funny, until the unforeseen climax, where, finally, no one is laughing anymore.

Director Sidney Lumet had teamed with Pacino once before (for 1973's 'Serpico') and their pairing here is even more successful. Lumet makes the absolute right decision to center the narrative almost entirely inside the bank, as this is Sonny's story. Even if we don't agree with his actions or fully understand his motives, we can't help but empathize with him. And even as the most potentially sensational aspects of the story unfold (some so seemingly absurd you would never believe them if they hadn't actually happened), Pacino makes them ring true with his flawless portrayal of a genuine, three-dimensional character. It's a tough tight-wire act for a film with an anti-hero as ultimately self-destructive as Sonny. The fact that Lumet and Pacino manage to succeed with seemingly little effort is what makes 'Dog Day Afternoon' an absolutely riveting film.

It's interesting to note that with all the controversy that greeted 'Brokeback Mountain' in 2005, exactly 30 years earlier we had a film that (in many ways) tells a parallel tale. Sonny is staging the heist to pay for a sex change operation for his lover (Chris Sarandon). Yet Sonny is also married, living a seemingly "normal" other life in Brooklyn. Scandalous, for sure, yet Lumet and screenwriter Frank Pierson do not treat it as such. Instead, this is simply a portrait of a man who wanted to make everyone happy. Sonny is a product of his upbringing -- bred from birth to be a people pleaser, and as Lumet and Pierson methodically reveal details that paint a portrait of his background, it becomes clear how he got himself into this predicament. His greatest strength -- his purely innocent desire to love and nurture -- becomes his fatal flaw, as he begins to mistake the rabid attention of the media and police for the much-needed approval he seeks. Yet Sonny is not portrayed here as some sort of wanna-be reality TV star or pathetic thrill-seeker. Instead, Pacino receives such unexpected empathy from the audience because he makes us understand -- with subtle brilliance -- that Sonny's deeds are a tragedy of misguided emotion, not malice.

'Dog Day Afternoon' also works fantastically well as a thriller. It is truly unsettling and suspenseful from the first frame. Lumet has a way of disorientating us by never resorting to clichés. Sonny is not a good bank robber; in fact, he's completely inept. It becomes comical, especially as the Lieutenant assigned to the case (Charles Durning) turns up the heat and the media maelstrom outside threatens to explode. Yet the humor adds to the tension, rather than distracting from it or turning the film into camp. The atmosphere in the bank compresses to such an extent that it is like being trapped in a submarine about to implode. Relentlessly realistic and impossible to take your eyes off of, 'Dog Day Afternoon' ends on a note that shocks, disturbs, and leaves a residue that lasts long after the end credits fade. In fact, it is still resonating 40 years later. 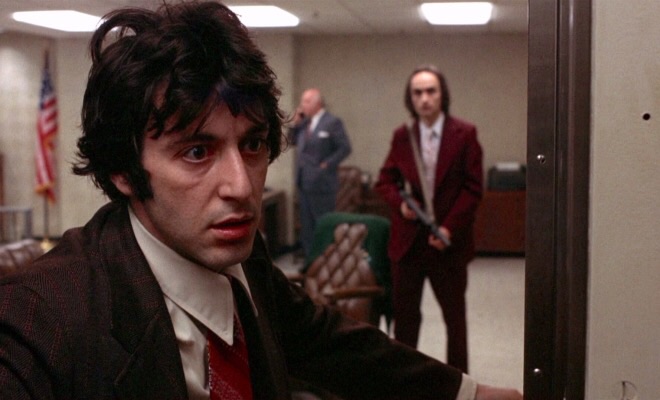 The 40th anniversary edition of 'Dog Day Afternoon' arrives on Blu-ray packaged in a standard case inside a sleeve. A 50GB dual-layer Blu-ray disc contains the movie and several supplements, and a standard-def DVD includes a documentary on actor John Cazale and more supplements. Video codec is 1080p/VC-1 and default audio is DTS-HD Master Audio 1.0. Once the disc is inserted into the player, the static menu without music immediately pops up; no previews or promos precede it.

The biggest disappointment of this 40th anniversary edition is no new transfer, but it's tough to complain too much, because Warner's existing 1080p/VC-1 rendering of 'Dog Day Afternoon' still looks very, very good. Peter Bracke called the transfer a "revelation" when he reviewed the original Blu-ray edition back in 2007. "Sure, 'Dog Day Afternoon' is still a gritty '70s picture," he wrote, "but no film over 30 years old should look this good." The remastering that was done several years ago holds up well, with nary a nick or scratch cropping up on the pristine source material. As Bracke earlier noted, "there is grain present throughout, but it's appropriate to the film's era, and only adds to the realism and impact of the picture. The visual palette is subdued at best - colors have a documentary look, but are actually quite vibrant, with strong primaries, especially during brightly-lit sequences. Blacks also hold up well, even in dark scenes, which tend to gray out on older titles, but remain deep here. Contrast has a slightly hot quality, but it matches the film's mood (this is called "Dog Day Afternoon," after all). Detail is superior for a film of this type, and I was quite impressed throughout with the depth to the image."

While Bracke carped a bit on the transfer's high level of edge enhancement, I didn't find it annoying at all. He said it lends the movie an "artificial look that almost seems too modern." I respectfully disagree. As presented here, 'Dog Day Afternoon' retains its natural appearance and gritty urban aura. Costumes and fine textures remain rock solid, shadow detail is quite good, background elements are easy to discern, and flesh tones are stable and true. Would we all have liked Warner to upgrade this transfer for the film's 40th birthday? Of course! But to be honest, it's not really necessary. 'Dog Day Afternoon' looks about as good as it ever will right here.

What Warner did upgrade for this 40th anniversary release was the film's audio, at last providing a lossless track to replace the Dolby Digital mono audio on the previous release. The sound is still mono, but the DTS-HD Master Audio 1.0 track boasts lots of presence and depth, enhancing the immediacy of the boisterous crowd scenes and allowing subtle details in the quiet bank to shine. Dynamic range has been increased, bass frequencies have more oomph, and all the priceless dialogue is clear and easy to comprehend. (Other than the opening song by Elton John, which sounds great, there's no music whatsoever in 'Dog Day Afternoon.') No surface noise or age-related pops and crackles crop up, but a bit of distortion occurs during the final airport sequence. While the improved audio isn't reason enough to upgrade, if you already own a previous high-def edition of this film, it's nice that we now have high-def sound to complement the high-def picture.

All the extras from the 2007 Blu-ray release have been ported over to this 40th anniversary edition, along with a new DVD documentary tribute to actor John Cazale.

Unless you're a diehard John Cazale fan or have been yearning for a lossless audio track, there's no need to upgrade to the 40th anniversary edition of 'Dog Day Afternoon.' The solid, vibrant video transfer remains the same, as do the disc supplements, and although the bonus DVD is a nice plus, it's not worth plunking down $20 for this celebratory reissue. Lumet's film, however, remains a classic, and stands as one of the exemplary examples of gritty 1970s filmmaking. Pacino and his fellow actors deliver blistering portrayals, and Lumet's top-notch direction keeps us riveted from the opening frames to the very bitter end. If you consider yourself a film fan and have never seen 'Dog Day Afternoon,' this disc is a required purchase, but if you already own a previous version, keep it on your shelf. Judged on its own merits, this 40th anniversary release earns a high and hearty recommendation; just don't consider it any kind of worthy upgrade.

Sale Price 16.21
List Price 24.98
Buy Now
3rd Party 15.81
In Stock.
See what people are saying about this story or others
See Comments in Forum
Previous Next
Pre-Orders
Tomorrow's latest releases