Screen icon Alan Ladd produces and stars in this crime spectacle, shot on location in noir central - San Francisco. Steve Rollins (Ladd) is both ex-cop and ex-con, recently sprung from the stir. Spurning both love (Joanne Dru, as a songstress spouse who strayed) and friendship (William Demarest as his ex-police partner), Steve has one singular quest: Kill whoever set him up for murder, or die trying. Blending adult drama, detective story and noir, Hell on Frisco Bay is a cinema stew that's heavy on the savor and the flavor, thanks to its colorful CinemaScope and a top-notch supporting ensemble. Heading that ensemble is Edward G. Robinson, delivering one of his most unforgettable mobsters, the utterly repulsive and remorseless Vic Amato. Fay Wray nearly steals the show as a faded screen queen, while Paul Stewart serves up one of his finest performances as Joe Lye, Amato's hired killer with a conscience.

By 1955, gangster movies had been entertaining audiences for a quarter of a century, so it’s not surprising Hollywood found it increasingly difficult to inject fresh elements into the genre’s tried-and-true formula. Though Hell on Frisco Bay doesn’t bring anything new to the table (except maybe Technicolor and CinemaScope), there’s something comforting about its predictability. Slickly directed by Frank Tuttle and packed with potent performances, this hard-boiled revenge flick breezes along, ably mixing underworld drama and muscular confrontations with brusque banter, a little romance, and even a couple of songs.

Simple plot. Basic direction. Straightforward presentation. In a nutshell, that’s Hell on Frisco Bay. Yet like the old ad campaign for Holiday Inn, sometimes the best surprise is no surprise. Tuttle employs a paint-by-numbers approach, but takes great care, so the finished product looks polished. The story may lack depth, but the colorful portrayals and brisk pacing keep us engaged, while extensive location shooting in and around San Francisco and a thrilling speedboat climax (which tragically cost a stunt man his life) punch up the picture’s appeal.

As the movie opens, Steve Rollins (Alan Ladd), “the tough cop that got set up for manslaughter,” walks out of San Quentin prison after serving a five-year sentence. Bitter and disillusioned over the loss of his career and infidelity of his estranged wife Marcia (Joanne Dru), Steve funnels all his energy into finding the killer who framed him and shutting down the violent syndicate that grips San Francisco’s docks like a vice. His former colleague Dan Bianco (William Demarest) tries to dissuade him, but Steve won’t be deterred, and vows to bring ruthless kingpin Victor Amato (Edward G. Robinson) and his henchmen to justice if it’s the last thing he does.

Though Technicolor and CinemaScope don’t particularly suit this type of movie, they sure make the Golden Gate Bridge, Frisco Bay, and Joanne Dru look pretty. The wider screen immerses us more fully in the atmosphere, but diminishes both tension and that delicious sense of claustrophobia so essential to film noir. And by shooting in color instead of black-and-white, Tuttle sacrifices grit for gloss, dulling the narrative‘s down-and-dirty feel and lending it an antiseptic flavor instead.

Thankfully, the superior cast offsets any blandness. Just as he did in Shane a couple of years earlier, Ladd brings a quiet strength to his soft-spoken role, projecting an imposing on-screen presence that belies his diminutive stature. His chemistry with the beautiful Dru is a bit tepid, but he spars well with Robinson, who chews the scenery as voraciously as he chews his ever-present cigar. From the get-go, Robinson’s Amato resembles two of the actor’s iconic gangster creations - Rico in Little Caesar and Johnny Rocco in Key Largo - but without any of the subtle character complexities. Yet if Robinson rued Amato’s lack of dimension, he doesn’t let it show. On the contrary, he seems to relish every blustery threat, nasty put-down, and petulant outburst.

Hell on Frisco Bay never will be regarded as a top tier film noir, but it remains a prime example of efficient, workmanlike studio moviemaking during the 1950s. Artistry may come at a premium, but the entertainment value of this taut, pedestrian gangster flick is high enough to help it merit renewed attention more than 60 years after its initial release. If you’re a fan of the genre, you should definitely check it out. 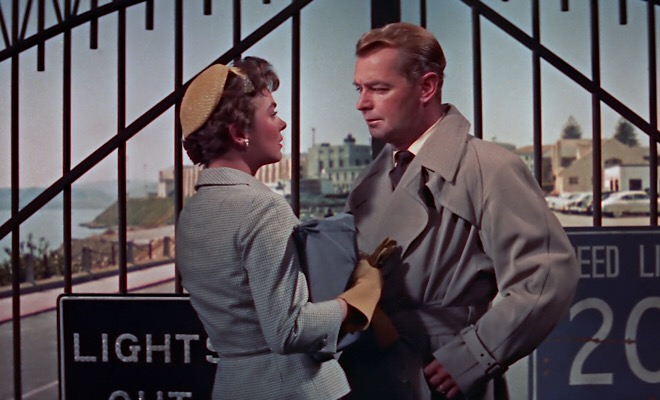 Hell on Frisco Bay arrives on Blu-ray packaged in a standard case. Video codec is 1080p/AVC MPEG-4 and audio is DTS-HD Master Audio 2.0. Once the disc is inserted into the player, the static menu without music immediately pops up; no previews or promos precede it.

Warner Archive supplies a freshly minted, wonderfully lush 1080p/AVC MPEG-4 transfer that showcases both the dramatic San Francisco cityscape and the film’s attractive cast. Contrast and clarity are first-rate and a natural grain structure preserves the feel of celluloid. Colors, especially primaries, are bold and vibrant, with the rust-colored Golden Gate Bridge, red bathroom tiles, and crystal blue sky all grabbing attention. Flesh tones err a tad toward the orange side, but blacks remain deep and inky throughout, the lines of Dru’s white evening gown are well defined, and excellent shadow detail keeps crush at bay. Sharp close-ups highlight the glamour of Dru and Mansfield, as well as the creases and folds in Robinson’s pudgy face, and not a single nick or scratch dot the pristine source material. Hell on Frisco Bay may not be regarded as a top-flight crime flick, but it gets the red carpet treatment from Warner, and fans of film noir and Hollywood classics will certainly appreciate this superior rendering.

Crisp and bright best describe the DTS-HD Master Audio 2.0 track that remains balanced and well modulated from beginning to end. Nuances like footsteps crunching against the pavement, running water, and the strike of a match are marvelously distinct, with sonic accents like gunfire, slamming doors, and shattering glass nicely punctuate the action. A wide dynamic scale handles all the highs and lows without a hint of distortion, while the great Max Steiner’s melodramatic music score fills the room with ease. All the dialogue is clear and comprehendible, and no age-related hiss, pops, or crackles mar the mix. It’s easy to take good audio for granted, but this high-quality track makes its presence known without calling attention to itself, and in so doing enhances this engrossing mob thriller.

The only extra is the film’s three-minute original theatrical trailer, which is presented in high definition.

Film noirs shot in Technicolor and CinemaScope somehow lack the grit and bite of their smaller ratio, black-and-white counterparts, and Hell on Frisco Bay is no exception. And yet this standard revenge yarn about a wrongly convicted cop who seeks to clear his name and bust up the crime ring that framed him is often terrifically entertaining, thanks to a taut script, efficient direction, sharp performances, and a fair amount of location shooting. Alan Ladd and Edward G. Robinson lead a stellar cast that makes the well-worn material seem far better - and fresher - than it is, while terrific video and audio transfers distinguish Warner Archive’s top-notch Blu-ray presentation. Hell on Frisco Bay may pale when compared to more renowned crime flicks, but 62 years after it was first released, it still delivers the goods. Recommended.

Sale Price 17.99
Buy Now
3rd Party 8.79
In Stock.
See what people are saying about this story or others
See Comments in Forum
Previous Next
Pre-Orders
Tomorrow's latest releases