Writer (here with Mickey Rose)-director-actor Woody Allen’s madcap Bananas (1971) is part wild political satire/part screwball romance.  Allen stars as the remarkably named Fielding Mellish, a nebbish whose yen for a political activist (Louise Lasser) involves him in a South American country’s exploding revolution, up to and including his eventual and unwitting appearance as a Castro-like dictator.

For those who might have forgotten just how funny Woody Allen can be, check out Bananas, a madcap romp about a hapless, lovesick nebbish who finds himself at the center of a Latin American political revolution after his girlfriend dumps him. Energetic, brash, irreverent, and undeniably silly, this breakneck farce fires a nonstop barrage of gags. Some hit, some miss, some are incisive, others are non-sequiturs, but most of what Allen and co-writer Mickey Rose throw at the wall sticks. Chaos reigns supreme, and the delightful, disjointed mayhem - often reminiscent of the Marx Brothers’ distinctive brand of lunacy - provides a welcome respite from life’s harsh realities.

It’s hard to believe Allen, who just turned 82 a few days ago, has been making movies for almost half a century. Yet before he became a serious director, comedy was his passion, and Bananas brings us back to those halcyon days when laughs mattered more to him than sober themes and personal journeys. Just like its title, Bananas is wild and crazy and utterly innocuous, and all those elements contribute to its considerable charm. There are reasons why many of Allen’s fans gravitate so strongly toward his early works - they’re less complicated, more accessible, and devoid of pretense. All Bananas seems to care about is milking the next laugh, and that narrow focus is very refreshing indeed.

Fielding Mellish (Allen) is a clumsy, bumbling, fearful, lonely, horny, and neurotic professional product tester who longs for love and hates what he does for a living. “I should be working at a job I have some kind of aptitude for,” he says, “like donating sperm to an artificial insemination lab.” One day, a cute, quirky petitioner named Nancy (Louise Lasser) knocks on his apartment door trying to drum up American support for the rebel resistance in San Marcos, a South American nation rocked by a recent military coup. Fielding doesn’t give a whit about the cause, but falls for Nancy hook, line, and sinker. The two have a brief romance, but Nancy breaks it off, calling the devastated Fielding “emotionally, sexually, and intellectually immature.”

He tries to get over her by traveling alone to San Marcos, where he becomes a pawn in the new dictator’s plan to subdue the revolutionaries and gain American support for his regime. But Fielding gets captured by the rebels instead and quickly becomes a pawn in their plot to gain American support for their efforts to overthrow the government and restore democracy. Complications abound, of course, and the easily manipulated Fielding gets in way over his head...with predictably zany consequences.

The movie’s priceless opening sequence featuring famed sportscaster Howard Cosell broadcasting a live play-by-play of the violent San Marcos military takeover sets the slapstick tone and paves the way for plenty of clever shtick. Allen combines one-liners, verbal zingers, and smart banter with broad physical comedy and some pantomime to keep us engaged and off balance, and tosses in a couple of subtle nods to classic films, duplicating the lighting of two cigarettes made famous in Now, Voyager and the shot of the baby carriage careening down the Odessa Steps in Battleship Potemkin. Energetic performances also fuel the film, which breezes along at a brisk clip and seems much shorter than its 82-minute running time.

Often summoning his inner Charlie Chaplin, Allen masterfully mixes physical humor with pangs of pathos that lend this outrageous farce essential warmth. Chaplin had his Little Tramp, and here Allen continues to develop the insecure, neurotic, hopelessly romantic persona he introduced in Take the Money and Run two years earlier. Whether he’s testing an out-of-control executive exercise desk, surreptitiously buying a pornographic magazine at a newsstand, fending off a couple of subway thugs (one of whom is played by a then unknown and uncredited Sylvester Stallone), taking over the reins of an operation from his surgeon father, or acting as both attorney and witness simultaneously during his own trial, Allen is always on the mark and oddly endearing.

Allen and Lasser were married for a few years in the late 1960s, but divorced by the time Bananas commenced production. Yet sparks still fly between them, and they make an appropriately kooky, believable couple. Though Lasser - after an appearance in one of the sketches in Everything You Always Wanted to Know About Sex (*But were afraid to ask) the following year - soon would be replaced as Allen’s leading lady by Diane Keaton, she possesses many attractive qualities that complement Allen well and would surely have bolstered his subsequent films, had their relationship continued.

For the most part, Bananas is mindless fun, but it does perceptively lampoon the tenuous political climate of underdeveloped nations, as well as the time-honored idea that absolute power corrupts absolutely. Parallels to Fidel Castro are hard to miss (just take a gander at the disc’s cover art), but such topical connections only pepper the story; they don’t drive it. And that just might be why Bananas stands the test of time. The film marked Allen’s first big success as a director and remains a testament to his unique comic gifts both in front of and behind the camera. It may be 46 years old, but Bananas is still a ripe - and very tasty - piece of cinematic fruit. Go ahead and give it a bite. 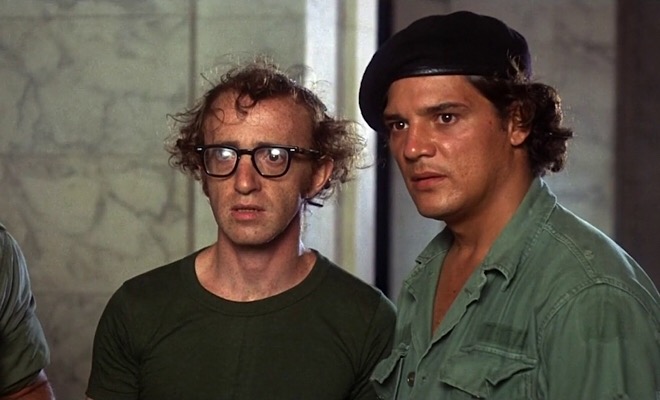 Bananas arrives on Blu-ray in a limited to 3,000 edition packaged in a standard case. An eight-page booklet that includes an essay by film historian Julie Kirgo and a few color scene stills (but not, as per usual, a reproduction of the film’s poster art) is tucked inside the front cover. Video codec is 1080p/AVC MPEG-4 and audio is DTS-HD Master Audio 1.0. Once the disc is inserted into the player, the static menu without music immediately pops up; no previews or promos precede it.

As bright as a bunch of ripe bananas, the 1080p/AVC MPEG-4 transfer of Bananas from Twilight Time brings this vintage 1970s comedy to brilliant life, A few specks dot the print from time to time, but the source material is otherwise spotless and flaunts a lovely grain structure that lends the image a film-like feel. Terrific clarity and contrast thrust us into the thick of the mayhem, and bold, vibrant colors pop off the screen. Yellows and oranges are especially strong, but pastel blues and pinks stand out, too. Blacks are rich, patterns remain stable, and flesh tones appear natural. Shadow delineation is good, background details are easy to discern, and any digital doctoring escapes notice. This is another stellar effort from Twilight Time that will certainly please Allen’s fans.

The DTS-HD Master Audio 1.0 track supplies clear, well-modulated sound. Ambient effects like crowd noise subtly enhance the atmosphere, while more pointed sonic accents like gunfire are crisp and distinct. A wide dynamic scale handles all the highs and lows of Marvin Hamlisch’s rhythmic music score without a hint of distortion, and excellent fidelity and tonal depth help the Latin-tinged strains fill the room. All the funny dialogue is easy to comprehend, and no age-related hiss, pops, or crackles intrude. Audio plays a bigger role in Bananas than in most Allen film’s, and Twilight Time’s high-quality track splendidly showcases it.

Typical of Woody Allen home video releases, only a couple of extras are included on the disc.

Isolated Music Track - Marvin Hamlisch’s bouncy and infectious music score can be enjoyed without any intrusions on this isolated track.

Theatrical Trailer (HD, 3 minutes) - This inventive preview intersperses clips from the movie with a staged, comic interview with Allen, during which he describes the plot, lists the cast, and offers his own personal review of the picture.

Bananas put Woody Allen on the cinematic map, and this often riotous romp reminds us what a wonderfully gifted comedian the legendary writer-director can be. Gags galore punch up this farcical tale of a mild-mannered nerd who bumbles his way into the center of a South American revolution and becomes its unlikely hero. Though extras are slim on this Twilight Time limited edition release, excellent video and audio transfers distinguish the presentation. If you’re looking for a funny, clever, breezy bit of silliness with a splash of political satire, Bananas is your ticket. Highly recommended.