All aspects of sex, together with a couple of things only Woody Allen could come up with, appear in this wild comedy very loosely adapted from the bestselling book by Dr David Reuben. It is best remembered as the film where Gene Wilder is caught in flagrante delicto with a sheep, and Woody Allen appears as a reluctant human sperm.

"When it comes to sex, there are certain things that should always be left unknown. And with my luck, they probably will be."

At the time of its release in 1972, writer-director Woody Allen's in-name-only adaptation of Dr. David Reuben's provocatively titled self-help book, Everything You Always Wanted to Know About Sex* (*But Were Afraid to Ask) was considered a deliciously racy, irreverent, and edgy romp. Today, though, it seems rather quaint. Yes, it's still funny and brims with the patented brand of intellectual zaniness that defines Allen's early films, but this often-inspired spoof of sexual proclivities, dysfunction, and biological processes doesn't provoke the guffaws it surely did 45 years ago. An increasingly permissive society and the prevalence of internet porn have taken the sting out of what were once titillating and taboo topics, and yet Allen's inventive treatments and scenarios keep this episodic film engaging.

Divided into seven individual segments, the film tackles a number of probing questions posed by Dr, Reuben in his book. (The answers, however, come strictly from Allen.) The opening salvo, "Do Aphrodisiacs Work?," takes us back to Elizabethan times as it chronicles the madcap efforts of a decidedly unfunny court jester (Allen) to (literally) crack the iron chastity belt protecting the virtue of his country's comely queen (Lynn Redgrave)...with the help of a libidinous potion concocted by a local sorcerer (Geoffrey Holder). "With most grievous dispatch, I will open the latch, and get to her snatch," the jester proclaims. And it is that bastardization of Shakespearean poetry - along with Allen's numerous audience asides and relentless punning - that lends this farcical sketch its humor.

"What Is Sodomy" examines the evolution of a sophisticated physician (Gene Wilder) whose unexpected sexual obsession with a sheep (yes, a sheep!) ruins his life. Wilder is priceless in this brief vignette, creating terrific chemistry with his woolly romantic partner and crafting a classic comic portrayal. Allen returns again in "Why Do Some Women Have Trouble Reaching an Orgasm?," this time as an Italian Casanova who's frustrated by the frigidity of his sexy girlfriend (Louise Lasser) until he discovers the secret that transforms his exotic cold fish into a raving nymphomaniac. Performed in Italian with English subtitles, this wonderfully aloof skit resembles a hip 1960s European film, with Allen and Lasser (who used to be husband and wife) perfectly embodying their super-cool roles.

"Are Transvestites Homosexuals?" resembles a slapstick TV sitcom and is probably the least funny segment in the film. Lou Jacobi plays a middle-aged, working class husband with a fetish for women's clothing, and though he gives an energetic performance, the forced humor often falls flat. "What Are Sex Perverts?" employs grainy black-and-white photography and spoofs game shows like "What's My Line?" as celebrity panelists (among them, Regis Philbin) try to guess the secret sexual perversions of everyman contestants. (Real-life game show host Jack Barry emcees the program.) Allen pays homage to the cheap sci-fi/horror flicks of the 1950s in "Are the Findings of Doctors and Clinics Who Do Sexual Research and Experiments Accurate?," which exposes the dastardly experiments of mad scientist Dr. Bernardo (John Carradine), whose laboratory spawns a "gigantic tit" that breaks free and terrorizes the surrounding community in typical monster movie fashion.

One might think a film of this sort would live or die by its risqué jokes and innuendoes, but although Allen's witty script delivers in that regard, his directorial style carries the movie. Allen finds creative ways to explore and document each topic, using various forms of language and stimulating visuals to augment the salacious subject matter and outrageous gags. Without its imaginative presentation, Everything You Always Wanted to Know About Sex* (*But Were Afraid to Ask) would be as dry as the textbook upon which it is based and wouldn't arouse any interest, sexual or otherwise. Allen's impeccable cinematic sense both propels the disjointed narrative and binds the film into a cohesive whole.

Sex may be inherently ridiculous, but it isn't funny on its own. Allen makes it funny by adroitly combining audacity with spicy satire. It's a treacherous minefield, and though Allen occasionally stumbles and some of the material seems dated and tame, he navigates the terrain with aplomb. Everything You Always Wanted to Know About Sex* (*But Were Afraid to Ask) isn't Allen's best early film, but it still tickles our fancy, allowing us to laugh at a subject many of us take way too seriously. And no matter how far our society has advanced sexually since 1972, that's why this delightful movie still matters. 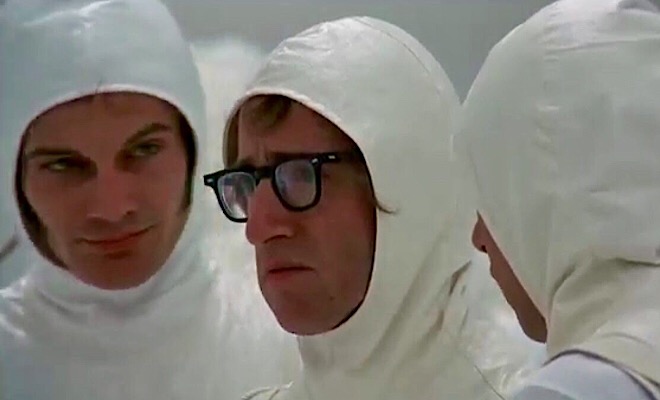 Everything You Always Wanted to Know About Sex* (*But Were Afraid to Ask) arrives on Blu-ray in a limited to 3,000 edition packaged in a standard case. An eight-page booklet featuring an essay by film writer Julie Kirgo, three full-color scene stills, and a color reproduction of the movie's poster art is tucked inside the front cover. Video codec is 1080p/AVC MPEG-4 and audio is DTS-HD Master Audio 1.0. Once the disc is inserted into the player, the static menu without music immediately pops up; no previews or promos precede it.

The 1080p/AVC MPEG-4 transfer from Twilight Time (courtesy of MGM) looks strikingly good, considering its advanced age. Though a smattering of errant speckles occasionally dot the print, the overall image remains clear and vibrant throughout. Well-pitched contrast, strong detail levels, nicely rendered fabrics, often sumptuous colors complement the picture, while a delicate grain structure maintains the film-like feel. Bold reds, yellows, and oranges light up the screen, and Gene Wilder's crystal baby blues sparkle. Whites are everywhere, from the fluffy fur of the adorable rabbits in the opening and closing sequences to the multitude of sperm costumes in the final segment, and they're always crisp and distinct. Rich, deep blacks supply essential weight, but no crush is visible, and close-ups delineate fine facial elements with precision. Flesh tones appear a bit pinkish and a slight softness occasionally afflicts the image, but those are the only minor faults of this surprisingly vivid and engaging transfer.

Everything You Always Wanted to Know About Sex... is one of the few Woody Allen films that employs some original music, and the score by Mundell Lowe sounds great on this DTS-HD Master Audio 1.0 track. Excellent fidelity and tonal depth lend the music an appealing brightness, and a wide dynamic scale handles all the highs and lows without a hint of distortion. Of course, dialogue is the star of any Allen film, and all the innuendos and clever one-liners are clear, comprehendible, and nicely prioritized. No age-related surface noise is present (except during the vintage recording of Let's Misbehave that opens the film), and all the ambient effects and sonic accents are well integrated and modulated. Audio tracks for Allen's movies are never flashy, but this one exhibits more oomph than most.

Typical of Woody Allen home video releases, the only standard supplement is the film's original theatrical trailer (HD, 2 minutes), which employs the majestic theme music from 2001: A Space Odyssey during its opening moments.

Some things change, but sex remains largely the same, so it doesn't really matter if Woody Allen's Everything You Always Wanted to Know About Sex* (*But were afraid to ask) is celebrating its 45th anniversary this year. Though the topics this zany comedy addresses may not be as shocking as they might have seemed back in 1972, they're still relevant, and Allen treats them with his trademark irreverence and ingenuity. Not every episode hits the bullseye, and the humor may seem a bit tame today, but Allen's film is still an amusing, inventive, and titillating trifle. Supplements are slim on this limited edition Twilight Time release, but vibrant video and audio transfers perk up the disc and enliven this classic send-up of sexual hang-ups and issues. Recommended.