Sayonara preaches racial tolerance and cultural diversity against an authentic Japanese backdrop, and the result is a stunningly beautiful and emotionally affecting film. Twilight Time’s Blu-ray presentation of this classic romantic drama skimps on extras, but features a glorious video transfer (despite an inferior source) and excellent audio. Recommended.

Interracial romance has been a hot Hollywood topic since the dawn of motion pictures. Yet no matter how far society evolves or how many barriers crumble, the subject continues to strike a nerve and provide a provocative dramatic premise. Recent movies like Loving and A United Kingdom use a historical perspective to make a contemporary statement, while The Big Sick and Get Out cleverly call attention to the issue by shrouding it in humor and horror. Sayonara navigated those same murky waters six decades ago when less open attitudes and more severe prejudices constrained our freedom to marry the person of our choice regardless of skin color and ethnicity. It was a bold, groundbreaking movie back in 1957, and while some elements now seem dated, it remains relevant and powerful today.

Yet despite its earnest approach and carefully crafted viewpoint, Sayonara never feels forced. Director Joshua Logan’s adaptation of James Michener’s semi-autobiographical novel adopts a lyrical tone as it takes its audience - and characters - on a voyage of discovery. Japan is the destination, and we see the country's fascinating and alluring customs, culture, and people through the naïve eyes of Major Lloyd Gruver (Marlon Brando), an ace pilot in the Korean War who's reassigned to Kobe in 1951 after Lt. General Mark Webster (Kent Smith) pulls a few strings. Lloyd is engaged to the general's daughter, Eileen (Patricia Owens), who arrives from the States to be with Lloyd despite harboring doubts about his love. Meanwhile, Lloyd's Air Force buddy Joe Kelly (Red Buttons) announces his intention to marry his Japanese girlfriend, Katsumi (Miyoshi Umeki), against the advisement of the U.S. military, which frowns upon interracial unions. The unenlightened Lloyd also views the Japanese through a prejudicial prism and tries to dissuade Joe from making what he believes to be a huge mistake.

Joe proceeds with his nuptials, and during the early days of his domestic bliss with Katsumi exposes Lloyd to an entirely different culture and life. At a theatrical performance, Lloyd becomes smitten with one of the dancers, Hana-ogi (Miko Taka), whom he soon discovers hides a deep-seeded hatred of Americans due to the atomic destruction they caused during World War II. A tentative romance develops that puts additional strain on Lloyd's relationship with both Eileen, who has struck up a friendship with a famous Kabuki actor, Nakamura (Ricardo Montalbán), and her close-minded parents. Even more conflict erupts when Joe, who's been continually mistreated by his bigoted superiors ever since his marriage, learns he will be transferred back to the States along with all the other servicemen with Japanese spouses. Yet a cruel military law prohibits the Asian wives from accompanying their husbands to America, a restriction that affects not only Joe and the now-pregnant Katsumi, but also Lloyd, who has been completely seduced and transformed by his Japanese experience and must ponder what the future may hold if he continues to pursue Hana-ogi.

Filmed entirely on location in Japan, Sayonara immerses us in the country's intoxicating setting and culture, and the leisurely pacing allows us to soak up the surroundings and become fully acclimated to a foreign land. Shots linger on the beautiful scenery and a few interludes provide tastes of such vital Japanese traditions as Kabuki theater, the all-female Takarazuka Revue, and the time-honored tea ceremony. The movie also paints a three-dimensional portrait of the Japanese people by emphasizing the ideals and credos to which they strictly adhere. Honor, duty, and family lead the list, and Paul Osborn's script incisively depicts how the enormity of those principles weigh upon them and breed their own brand of xenophobia. Bigotry is often a double-edged sword, and in order to achieve common ground, Lloyd and Hana-ogi must learn to relax their respective rigid attitudes and pre-conceived notions and embrace different perspectives.

Important social themes notwithstanding, Sayonara is first and foremost a tender love story told with warmth, humor, and sincerity. Logan, who would film Rodgers and Hammerstein's South Pacific (adapted from another Michener tale with similar intolerance motifs) the following year, deftly balances all the elements to craft a completely authentic production...with one notable exception. Like so many other Hollywood films of the period, Sayonara employs a western male to play its major Asian character, which is more than a little ironic considering the tale so vehemently denounces discrimination. Why travel all the way to Japan to shoot the movie, cast two Japanese actresses in the leads, and then have a Mexican in artificial makeup portray a Kabuki master? (Interestingly, Brando himself played an Asian the previous year in The Teahouse of the August Moon, a film that was also shot on location in Japan.) To his credit, Montalbán files a credible, often reverent performance (a far cry from Mickey Rooney's embarrassing caricature of a Japanese landlord in Breakfast at Tiffany's), but his appearance is both distracting and unnecessary, and it taints an otherwise highly reputable motion picture.

Brando rarely played traditional romantic leads during his long and storied career, but he strikes a dashing pose here, exhibiting both strength and vulnerability, and his palpable chemistry with Taka heightens the impact of their on-screen affair. Against the wishes of Logan, Brando adopted a thick, lazy Southern drawl for the part that punctuates Lloyd’s prejudicial viewpoints, but coupled with the actor’s serial mumbling, it makes some of his line readings difficult to understand. (Brando rightfully received his fifth Best Actor Oscar nomination for Sayonara, but would lose the award to Alec Guinness for The Bridge on the River Kwai.) Taka contributes heartbreaking work as the conflicted Hana-ogi and a young, strapping James Garner in only his fourth film makes a notable impression as one of Brando’s military pals.

In all, Sayonara would nab a whopping 10 Academy Award nods, including Best Picture, Director, Adapted Screenplay, and Cinematography. (All four of those honors would go to The Bridge on the River Kwai.) Both Buttons and Umeki - who is probably best known for portraying the kindly, wise Mrs. Livingston in the 1960s TV series The Courtship of Eddie's Father - won supporting prizes for their symbiotic performances, and the film's art direction/set decoration and sound were also recognized. In addition, Sayonara, which ultimately grossed upwards of $10 million (a very pretty penny in those days), would stand as Brando's most successful picture until the release of The Godfather 15 years later in 1972.

Plenty of films expose the insidious nature of racial prejudice and make an impassioned plea for tolerance. Sayonara may not be as powerful as some, but transmits its message loud and clear. It's also a beautiful, often charming, and absorbing movie filled with romance and emotion. Watching it today, it shows us how far we've come, but also reminds us how far we still have to go. 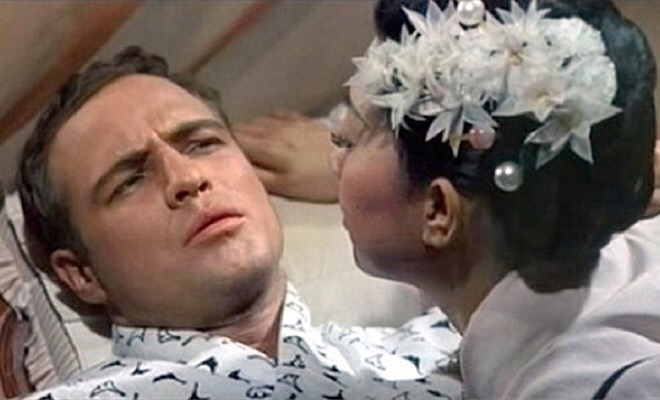 Sayonara arrives on Blu-ray in a limited to 3,000 edition packaged in a standard clear case. An eight-page booklet featuring an essay by film historian Julie Kirgo, color-tinted scene stills, and a reproduction of the movie’s poster art is tucked inside the front cover. Video codec is 1080p/AVC MPEG-4 and audio is DTS-HD Master Audio 2.0. Once the disc is inserted into the player, the static menu without music immediately pops up; no previews or promos precede it.

Because it was filmed in a now defunct process known as Technirama (a cousin of CinemaScope that boasted higher resolution and less grain), Sayonara translates particularly well to the digital medium. And the 1080p/AVC MPEG-4 transfer from Twilight Time showcases Ellsworth Fredericks’ gorgeous, Oscar-nominated cinematography to near perfection. The crystal clear image exhibits strong detail, beautifully saturated colors, and a smooth, film-like appearance, while excellent contrast lends the picture an eye-popping vibrancy. Grain is noticeable, but it’s seamlessly integrated into the presentation and supplies essential texture, and the breathtaking Japanese scenery is wonderfully rendered. Yet it’s the lush, bold hues that consistently hijack our gaze and steal the show. Reds are especially rich and bright, but purples, yellows, lavenders, blues, and oranges, as well as the mahogany tones of wooden floorboards, are also perfectly pitched. Blacks are dense but resist crush, whites are crisp and never bloom, patterns are solid, flesh tones remain stable and natural throughout, and sharp close-ups highlight fine features well.

The transfer’s only drawback is its less-than-pristine source material. At times, flurries of white and black specks dance across the screen, creating an annoying snowstorm that detracts from the presentation’s overall brilliance. Though quite severe early in the film (some horizontal lines also mar the image), the effect then subsides, but episodes sporadically reoccur over the course of the movie’s running time. Eagle eyes always will be able to spot a few errant specks, but they’re easy to forgive during cleaner stretches of the film. Without a doubt, this transfer would earn a perfect score were it not for the print damage. And normally, the degree of damage here would bump the score down a bit further. Yet this transfer is so jaw-droppingly sublime in almost every other category, it doesn’t deserve a harsh penalty. Yes, the flaw is unfortunate, but it shouldn’t deter anyone from purchasing Sayonara. The film looks spectacular on Blu-ray.

Sayonara won the Oscar for Best Sound, and this high-quality DTS-HD Master Audio 2.0 track nicely honors George Groves’ work. Superior fidelity and tonal depth maximize the impact of Franz Waxman’s lush music score, and a wide dynamic scale handles all of its peaks and valleys without a hint of distortion. Though stereo separation isn’t particularly pronounced, a few palpable episodes add welcome dimension and complexity to the audio. This is a quiet track overall, but all the subtleties come through clearly, all the dialogue - even when mumbled by Brando and spoken with thick accents by the Japanese actors - is comprehendible, and no age-related hiss, pops, or crackles intrude. This lossless mix makes Sayonara sound great, and that’s good news indeed.

Just a couple of negligible supplements are included on the disc. It’s surprising (and disappointing) Twilight Time decided not to include an audio commentary, considering the movie’s important social themes and Oscar accolades.

Isolated Music & Effects Track - The sweeping, romantic score by Franz Waxman and all the Japanese theatrical presentations can be enjoyed without any dialogue interference on this isolated track.

The issues concerning interracial romance explored in Sayonara may no longer be taboo, but they are certainly timeless, and director Joshua Logan’s adaptation of James Michener’s novel tackles them with sensitivity and perception. This Best Picture nominee and multi-Oscar winner preaches tolerance and cultural diversity against an authentic Japanese backdrop, and the result is a stunningly beautiful and emotionally affecting film. Twilight Time’s Blu-ray presentation skimps on extras, but features a glorious video transfer (despite an inferior source) and excellent audio. Recommended.