Prince Seretse Khama of Botswana causes an international stir when he marries a white woman from London in the late 1940s.

"I love my people! I love this land! But I love my wife!"

Two films based on true-life incidents revolving around interracial marriage and the discrimination, hatred, and social unrest it provoked back in the mid-20th century were released in 2016. You probably heard of Loving, which chronicles the struggles of a Virginia couple to legally legitimize their controversial union, because it nabbed a Best Actress Oscar nomination for Ruth Negga. But you probably missed the equally affecting A United Kingdom, a sensitive, intimate account of the personal and political turmoil sparked by the marriage of an African royal heir to a white British commoner in the years immediately following World War II. And that's a shame. Though its narrative unfolds in two very different foreign cultures, the universal themes that permeate director Amma Asante's moving, inspirational, and elegant film make it eminently relatable.

I'm a history buff, but I was unfamiliar with the story of Seretse Khama, who became the king of Great Britain's Bechuanaland Protectorate (now the independent country of Botswana) at the tender age of 4. His uncle acted as regent until Seretse came of age, but just prior to assuming his duties, Seretse met Ruth Williams, a middle-class bank clerk, while studying in England. A romance quickly developed, and against the wishes of her close-minded father, Ruth married Seretse in 1948. Neither of them, however, were sufficiently prepared for the intense social scrutiny and political backlash their defiant act of love would bring.

Seretse's uncle fought him bitterly over the assumption of power, the members of Seretse's tribe viewed Ruth with suspicion and disdain, and the British government worried the controversy would increase tensions in the area (South Africa had just initiated the law of apartheid) and loosen Britain's stranglehold over the region's land, commerce, and people. As a result, Seretse was ordered into exile and forced to leave his wife behind. A United Kingdom faithfully dramatizes these events and examines how they tested the commitment and resolve of both Seretse and Ruth, spurred social change, and influenced the future of Southern Africa.

Asante treats her subject with appropriate reverence and nicely balances the tale's sweeping historical elements with the primary intimate love story. The location shooting in Botswana and glorious vistas of the African countryside lend the film essential authenticity, and the script sticks refreshingly close to the facts. While it's often tempting to embellish the real-life drama that pervades true-life love stories, such tinkering almost always backfires. Asante is careful to depict Seretse and Ruth's relationship in a mature light, but not at the expense of emotion, which naturally comes through at the proper moments.

A good script and fine direction, however, count for very little if the performances don't ring true. Thankfully, David Oyelowo and Rosamund Pike are perfectly cast as Seretse and Ruth. Oyelowo, who is perhaps best known for portraying another important civil rights leader, Dr. Martin Luther King, Jr. in Selma, strikes just the right tone, combining conviction and vulnerability with an irresistible charm that makes him both a dashing romantic lead and admirable political figure. It would be easy to adopt an overly earnest tone when portraying such an upstanding figure, but Oyelowo manages to remain natural, even during Seretse's most ardent orations.

I've been waiting awhile to see Pike in a role that would erase from my brain the image of her distasteful character in Gone Girl, and she finally obliged. With the same fervor she attacked the psychotic Amy Dunne, Pike embraces Ruth Khama, and her restrained, sensitive work is quite impressive. She and Oyelowo make a believable couple, and their resemblance to the real-life Seretse and Ruth (as seen in photos that run after the narrative ends) is striking. Jack Davenport of Pirates of the Caribbean fame makes a deliciously arrogant government bureaucrat and Terry Pheto shines as Ruth's loyal and spunky sister-in-law.

A United Kingdom is the kind of polished, sophisticated production we've come to expect from the United Kingdom, and if it does occasionally veer into sentimental, overly romantic territory, it's easy to forgive the missteps. Above all, this is a love story, but it's a literate, absorbing, well-acted, and socially relevant love story that explores a little-known but far-reaching episode in history with style, delicacy, and insight. And that's rare in this day and age. 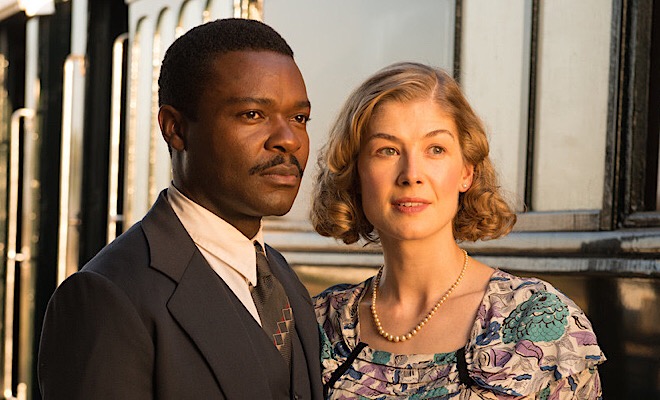 A United Kingdom arrives on Blu-ray packaged in a standard case inside a sleeve. A leaflet containing the code to access the Digital HD copy is tucked inside the front cover. Video codec is 1080p/AVC MPEG-4 and audio is DTS-HD Master Audio 7.1. Once the disc is inserted into the player, a promo for Digital HD copies and previews for Hidden Figures, Jackie, and Rules Don't Apply precede the full-motion menu with music.

Sam McCurdy's lush cinematography gets the red carpet treatment in this high-quality 1080p/AVC MPEG-4 rendering. Superb clarity and contrast and vibrant color enhance the beautiful, rugged landscapes of Botswana, as well as the impeccably appointed British interiors. A warm glow bathes many shots, heightening the film's period feel and romantic flavor, and razor-sharp close-ups, deep black levels, and accurate flesh tones combine to create a natural yet elegant image. Shadow delineation is quite good, background details are easy to discern, patterns on costumes and wallpaper are crisp, and no nicks, marks, or scratches dot the pristine source material. No banding or crush disrupt the presentation, and digital enhancements could be detected. This is a glorious transfer that presents Africa in all its eye-popping splendor, and looks especially good on a large-scale display.

The DTS-HD Master Audio 7.1 track provides well-modulated, occasionally immersive sound that seamlessly complements the on-screen action. Surround activity is faint yet palpable enough during crowd and weather scenes, and sonic accents like clicking cameras and popping flashbulbs are crisp and distinct. A wide dynamic scale handles all the highs and lows of Patrick Doyle's sweeping music score without a hint of distortion, and solid bass frequencies carry appropriate weight, but never overwhelm the track. All the dialogue is clear and easy to comprehend, and no imperfections like hiss or surface noise intrude.

A few short featurettes provide some background on the film's production.

Featurette: "On Location in Botswana" (HD, 6 minutes) - Director Amma Asante talks about the importance of filming in Botswana ("we wanted the DNA of Botswana running through our film"), the unbearable heat the cast and crew had to endure, the rare opportunity to shoot scenes in the home where Seretse and Ruth lived, and the enthusiasm of the local extras. We also learn A United Kingdom was the first feature film ever to be shot in Botswana.

Featurette: "Opening Gala, London Film Festival, 2016" (HD, 6 minutes) - Oyelowo, Pike, Asante, and actor Jack Davenport discuss the project's genesis, the movie's themes, the beauty of the story, shooting in Botswana, and the chemistry between the lead actors in a series of red carpet interviews before a screening of the film.

Don't let its lack of notoriety fool you. A United Kingdom is one of the better dramas of 2016. With passion and grace, director Amma Asante chronicles the true-life story of an African leader's controversial marriage to an English white woman and how it both rattles the foundation of the British Empire and incites tensions in the leader's homeland. Fox's Blu-ray presentation boasts top-notch video and audio transfers and a few behind-the-scenes featurettes, all of which complement this absorbing, beautifully acted tale of love, defiance, perseverance, and social change. Recommended.

Sale Price 24.55
Buy Now
3rd Party 20.59
In Stock.
See what people are saying about this story or others
See Comments in Forum
Previous Next
Pre-Orders
Tomorrow's latest releases