From acclaimed writer/director Sofia Coppola (Lost in Translation) comes an atmospheric thriller that unfolds at a secluded girls' boarding school in Civil War-era Virginia. When a wounded Union soldier, Corporal McBurney (Colin Farrell), is found near the school, he's taken in by its headmistress, Miss Martha (Nicole Kidman). As the young women provide refuge and tend to his wounds, the house is taken over with sexual tension and dangerous rivalries when McBurney seduces several of the girls. Taboos are broken and events take an unexpected turn in this gripping and haunting thriller also starring Kirsten Dunst and Elle Fanning.

When I first heard Sofia Coppola planned to remake Don Siegel’s fascinating 1971 Civil War thriller The Beguiled, I have to admit I was intrigued. Though I’m not a big fan of Coppola’s previous work, I wondered how a female director would interpret the provocative material. The casting of Nicole Kidman, Colin Farrell, Kirsten Dunst, and Elle Fanning also piqued my interest in the project, but couldn’t completely assuage the doubts I harbored regarding the entire enterprise. Did The Beguiled really need to be remade? Could Coppola really bring anything new to the table? And could Farrell and Kidman really eclipse the memorable performances of Clint Eastwood and Geraldine Page in the original?

The answer to all those questions is - simply - no. Does that mean Coppola’s remake of The Beguiled is an unabashed failure? Absolutely not, and those unfamiliar with Siegel’s moody and atmospheric film will probably respond favorably to this faithful retelling. Coppola’s film is well constructed, well acted, brimming with atmosphere, and lovely to look at, but it lacks the ferocious bite and psychological complexity of its predecessor. And those elements are what give the movie its guts.

The Beguiled, adapted from a novel by Thomas Cullinan, takes place in 1864 and focuses on a small, isolated group of women and adolescent girls holed up at a Virginia boarding school during the final months of the Civil War. Cut off from a ravaged society and forced to fend for themselves, the women are repressed and on edge. One day, while picking wild mushrooms in the woods, one of the students happens upon a severely wounded Yankee soldier who has deserted his unit. She helps him back to the Farnsworth Seminary and alerts the school’s headmistress, Martha Farnsworth (Kidman), who takes him in and begins to administer treatment. Martha quickly becomes attracted to Corporal John McBurney (Farrell) and decides not to turn him over to the Confederate authorities, preferring instead to let him recover, much to the secret relief of all the women, who are uneasy about allowing a man to invade their feminine domain, yet excited by his seething masculinity, which stokes their dormant and burgeoning sexual desires.

Everyone begins to flirt with the corporal, who enjoys the attention and doesn’t discourage their advances. Edwina (Dunst), one of the teachers, is especially shy and inexperienced, but can’t hide her amorous feelings for John, while the eldest student, Alicia (Fanning), virtually throws herself at his feet, flaunting her nubile sexuality without inhibition. As John’s wounds heal, he endeavors to stay at the seminary to avoid returning to combat, but his desperation and manipulations set in motion a horrific string of events that affect everyone under the school’s roof.

Coppola tries her best to distance her remake from the original by subtly shifting the focus away from the male hero and moving the women more fully into the spotlight. It’s not a bad idea, but her concentration on feminism and female empowerment is so obvious it overwhelms and cheapens the narrative. In Siegel’s film, John is a charming rascal and master manipulator who enjoys raising the sexual temperatures of the women and pitting them against each other in their pursuit of him. He eventually loses control of his game, however, and can’t escape the dire consequences when it goes awry. Coppola takes a different path, but by creating a tighter sisterhood among the women, she robs the tale of much of its cat-fighting conflict and diffuses necessary tension. In her version, the women don’t seem as repressed and hungry (or as interesting), and John is not as superior and chauvinistic, nor are his sly machinations as evident.

Farrell is no Eastwood and Kidman is certainly no Page (who spoiled the role for anyone else), but they both assert themselves well, as do Dunst, Fanning, and the rest of the ensemble cast. Strangely, Coppola chose to delete an African-American slave who also lusted after John in the original, and decided to make Dunst’s character white instead of biracial, thus watering down other incendiary aspects of the story. Though gorier than the original, Coppola’s incarnation lacks the shock value and twisted psychological elements that make Siegel’s film so memorable.

While I understand the desire to remake and update classic movies, the idea always seems better in theory than execution, and The Beguiled is a perfect example. You can always improve a bad film, but tinkering with a good one often yields few rewards. Thankfully, Coppola respects the original, honors its memory, and doesn’t destroy its legacy, but if watching a remake only makes you want to immediately revisit its precursor to remind yourself just how much better it is, then you gotta wonder what’s the point? 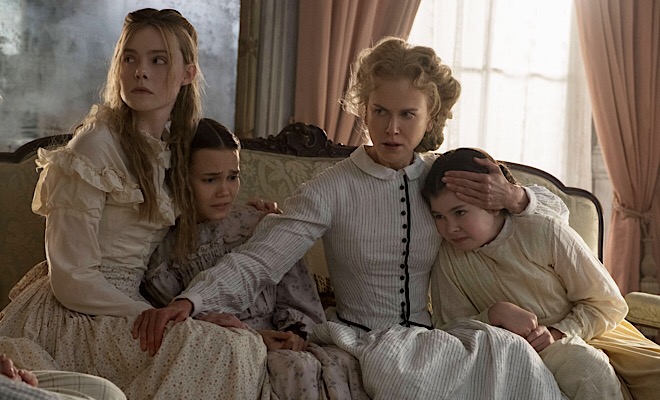 The 2017 version of The Beguiled arrives on Blu-ray packaged in a standard case inside a sleeve with raised lettering. A leaflet containing codes to access the HD Digital Copy, as well as a free Universal movie, is tucked inside the front cover, along with a DVD copy of the film. Video codec is 1080p/AVC MPEG-4 and default audio is DTS-HD Master Audio 5.1. Once the disc is inserted into the player, a promo for Focus Features, teasers for Atomic Blonde and The Book of Henry, and a preview for Victoria & Abdul precede the full-motion menu with music. If your player has a wireless or wired Internet connection, a couple of fresh trailers will be downloaded from Universal’s website. (I got The Snowman, Made in America, and a 4K Ultra-HD promo.)

The cinematography of Philippe LeSourd is beautifully rendered in this strong 1080p/AVC MPEG-4 transfer from Universal. Though a bit dark at times, details still shine through, and excellent clarity and vibrant contrast bolster the impact of the very film-like image. Colors are used sparingly, but bold, bloody reds and verdant greens add splashes of lushness, while deep black levels and bright whites balance the frame. Some of the close-ups of Kidman look a bit diffused, but those of the other actors nicely highlight fine facial features. Flesh tones appear natural and remain consistent throughout, shadow delineation is quite good, and nary a nick or mark sullies the pristine source material. Annoying digital issues are also absent in this smooth, elegant presentation.

Lots of crisp surround action distinguishes the DTS-HD Master Audio 5.1 track, which is surprisingly robust for such a quiet film. Atmospherics like buzzing crickets and chirping birds emanate from all five speakers, thudding bass allows us to feel the distant shelling, and subtleties like footsteps are crisp and distinct. A wide dynamic scale keeps distortion at bay while seamlessly handling all of the track’s highs and lows, and superior fidelity and tonal depth bolster the impact of the music score. Some of the dialogue is a bit garbled, but most exchanges are clear and easy to comprehend. Atmosphere is such a major component of The Beguiled, and this strong track contributes greatly to the film’s eerie mood.

Featurette: “A Shift in Perspective” (HD, 7 minutes) - Writer-director Sofia Coppola reveals why she decided to remake The Beguiled, describes how she put a different spin on the story, and discusses the film’s Gothic themes in this slick EPK. In addition, Kirsten Dunst, Colin Farrell, and Elle Fanning (but, interestingly, not Nicole Kidman) share their perspectives on the picture and its production, the film’s younger actresses talk about their on-set camaraderie, and some behind-the-scenes footage adds some documentary flavor.

Featurette: “A Southern Style” (HD, 6 minutes) - Coppola admits the Gothic genre was challenging for her, but fun to explore in this breezy piece that looks at the movie’s production design from almost every angle. Costumes, hair, makeup, locations, and the film’s evolving color palette are just some of the topics (briefly) explored here.

Though writer-director Sofia Coppola puts an intriguing feminist spin on her remake of The Beguiled, the looming presence of Clint Eastwood continually hangs over this slow-burn thriller that lacks the power and complexity of its predecessor. Coppola weaves a creepy mood, but keeps her characters too constricted, and the result - despite some gore - is a rather sterile, ponderous telling of what should be a passionate, tension-filled tale. Extras are slim on this Blu-ray release, but top-quality video and audio transfers punch up the appeal of the disc, which is certainly worth an isolated spin. Give it a rent, then go buy the original.

Sale Price 22.99
Buy Now
3rd Party 19.99
In Stock.
See what people are saying about this story or others
See Comments in Forum
Previous Next
Pre-Orders
Tomorrow's latest releases