Oscar winner Charlize Theron explodes into summer in Atomic Blonde, a breakneck action-thriller that follows MI6’s most lethal assassin through a ticking time bomb of a city simmering with revolution and double-crossing hives of traitors. The crown jewel of Her Majesty’s Secret Intelligence Service, Agent Lorraine Broughton (Theron) is equal parts spycraft, sensuality and savagery, willing to deploy any of her skills to stay alive on her impossible mission. Sent alone into Berlin to deliver a priceless dossier out of the destabilized city, she partners with embedded station chief David Percival (James McAvoy) to navigate her way through the deadliest game of spies. A blistering blend of sleek action, gritty sexuality and dazzling style, Atomic Blonde is directed by David Leitch (John Wick, upcoming Deadpool 2). Also starring John Goodman, Til Schweiger, Eddie Marsan, Sofia Boutella and Toby Jones, the film is based on the Oni Press graphic novel series“The Coldest City,” by Antony Johnston & illustrator Sam Hart.

It's inevitable that Atomic Blonde will be compared to John Wick in the eyes of action fans everywhere, and the comparisons are objectively and undoubtedly justified. And this is in spite the fact that the source material for this espionage thriller about a deadly government assassin beat our favorite neo-noir hitman by at least a couple years. Then, there is also the fact both films share the same director, David Leitch. Only, he's given an uncredited role in the first John Wick while Atomic Blonde marks his solo feature-length directorial debut. So, again, the comparisons are warranted. The problem is those comparisons, unfortunately, can and probably do sound more like accusations and an unreasonable judgment of the film's quality. In this case, action fans, and moviegoers, in general, will be missing out on one of the best genre flicks of the year, adding to a growing list of features from around the world that mark 2017 as a great year for movies as a whole. Despite feeling familiar, Leitch's film transcends the similarities to deliver a white-knuckle thrill-ride that's just as visually stunning and memorable as it is riveting and exhilarating.

Situated in the angst-ridden streets of a drastically-changing 1989 Germany on the eve of the collapse of the Berlin Wall, the story immediately opens with a chase and murder scene that essentially sets the tone and pace. At the heart of it is a MacGuffin involving a wristwatch and the secret list of active spies that has MI6 scrambling to recover it. The scene is aggressive and animated with a kinetic energy that feels sadly missing from many contemporary actioners but carried through for the rest of the movie's 115-minute runtime. Of course, a large portion of the film's potently dynamic stamina comes from the totally bitchin' soundtrack of 80s tunes. And the constant shift of those killer tracks from diegetic to non-diegetic sounds driving much of the hard-hitting action is one of the several aspects of the production's awesomeness. Sure, I may have some bias in this regard, but seeing the brutally realistic fight choreography and car chases perfectly matched to the rhythm of popular hits like New Order's "Blue Monday" and Flock of Seagulls' "I Ran" ignites those sequences to a level that'll leave the audience mesmerized while also tapping their feet. 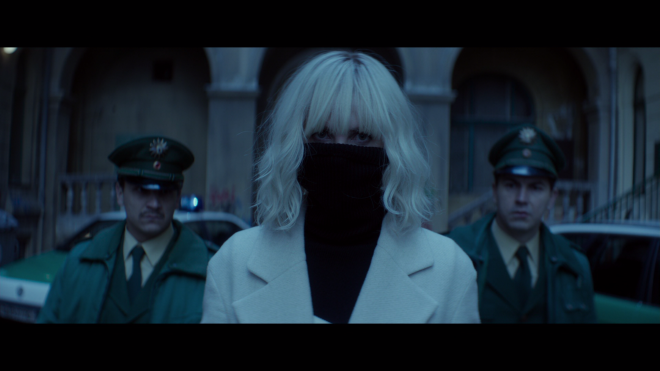 To locate and retrieve the list, MI6 heads (Toby Jones and James Faulkner) dispatch their top-level operative Lorraine Broughton (Charlize Theron) into the dangerous USSR-occupied den. And it's immediately apparent Ms. Theron is game for the role of an agent who's just as suave with her words and chic looks as she with her lethal fists. There's no denying the South African-born actress went through some rigorous training to make her fights against bigger, more brutish men as savagely authentic and graphic as possible. And Leitch, along with editor Elísabet Ronaldsdóttir, allow Theron plenty of space on the screen to demonstrate the amount of time and work she put into it, such as the apartment sequence when she goes toe-to-toe with five cops. Or better yet, during a street demonstration as Lorraine tries to escort a defector codenamed Spyglass (Eddie Marsan), our badass heroine battles six or seven Stasi officers through several floors of an abandoned apartment complex. The near ten-minute long take — thanks to some creative editing — is a gripping, heart-racing feat of stunt choreography, a highlight of the production sure to leave viewers as exhaustive and weary as Lorraine, who simply wants an ice-cold bath and a drink of vodka.

Complicating matters for Lorraine is the wackily eccentric David Percival (James McAvoy), another British agent who's been in Berlin a wee-bit too long. McAvoy is excellent as an arrogant but debonair charmer with an agenda of his own, mucking up what should have been a simple operation into a cat-and-mouse game littered with double-crosses, wire-taps and murder. Sofia Boutella joins the cast as green-behind-the-ears French agent Delphine Lasalle, who ends up a lonely pawn in a larger game where we're never sure if Lorraine's personal interest is revenge for the death of the agent in the opening or something far bigger. And for some reason, John Goodman is also seen roaming about as a mysterious CIA agent. But while we try to solve the mystery and guess the ending, Leitch and cinematographer Jonathan Sela (John Wick, Transformers: The Last Knight) hypnotize with one of the most visually spellbinding action flicks ever, showering almost every scene with a flamboyant array of neon colors. Meanwhile, more obscure 80s tunes like Siouxsie and the Banshees' "Cities in Dust" and Marilyn Manson's rendition of Ministry's "Stigmata" turn quieter sequences into haunting portraits, adding to Atomic Blonde's list of sundry reasons to watch it.

Universal Studios Home Entertainment brings Atomic Blonde to 4K Ultra HD Blu-ray as a two-disc combo pack with an UltraViolet Digital Copy code. The Region Free, BD50 disc sits comfortably opposite a DVD-9 disc inside a blue, eco-vortex case with a glossy, embossed slipcover. After several skippable trailers, the disc switches to a menu screen with a static image of the cover art and music playing in the background.

The deadly bodacious assassin sneaks into Blu-ray with a righteous and totally demo-worthy 1080p/AVC MPEG-4 encode that ignites the screen with brilliantly vibrant neon colors.

Perfectly capturing the style and atmosphere of the 1980s, many sequences are bathed in the chic, cool glow of electrifying blues and warm, radical purples. While other primaries remain accurately-rendered throughout, much of the palette is focused on vivid, richly-saturated secondary hues. Walking through the streets of Berlin, however, the scenery is near monochromatic and dour, a deliberate creative choice of the filmmakers to reflect the cold political climate of the period. Pitch-perfect contrast delivers crisp, dazzling whites in the snow, Lorraine's outfits and various vehicles while still maintaining a gloomy, dismal feeling in daylight exteriors and allowing outstanding visibility in the distance. Black levels are gorgeous, providing the 2.40:1 image with inky rich, stygian shadows and excellent gradational details in the darkest portions of the frame.

The overall presentation is consistently razor-sharp, exposing the grimy cracks in the buildings, the filthy trash littering the streets and every nook and cranny of Percival's stuffy, poorly-lit apartment. While practically counting the individual bricks of the street or buildings, viewers can also distinctly make out each hair in Percival's fur coat or the well-defined threading in the radical clothing worn by the rest of the cast. Facial complexions not only appear healthy and appropriate to the climate, but they also reveal the tiniest blemish and imperfection in the male cast while our female heroines pretty much look flawless throughout. The only exception when battered and bruised Lorraine walks away from a brutally gnarly fight.

The espionage thriller also erupts onto the scene with a totally tubular and choice DTS:X soundtrack featuring a bitchin' selection of radical tunes that'll turn the home theater into a kickin' house party!

As one would suspect, the winners here are the 80s songs and Tyler Bates's score blaring into all the speakers and the overheads when in non-diegetic mode. When switching back to a diegetic element, the music smoothly refocuses across the screen without missing a beat. The noise of the nightclub echoing all around, creating an immersive hemispheric quality, and the streets of Berlin are continuously busy with hustle and bustle of city life. The ceiling channels are silent for the most part when music is not playing, but occasionally, some random effect will bleed over the listening area, such as alarm sirens or the crowd marching through the streets. Most of the atmospherics are retained to the surrounds, but from time to time, they also move discretely overhead.

Much of the action is maintained across the front soundstage, which feels broad and expansive with lots of off-screen activity providing a great sense of space and presence from beginning to end. The mid-range exhibits superb distinction and clarity even during the loudest sequences, delivering every punch, crack, snap and crunch of metal on metal with awesome clarity and detail. Every whispered conversation and emotional line is well-prioritized and lucid in the center while also once in a while fluidly between all three channels to further add to design outstanding sense of space. A powerful and sometimes authoritative low-end sends a full-bodied rumble across the room, giving those aforementioned punches some weight, the explosions an exciting oomph and every gunshot a sharp thump.

Audio Commentary: Director David Leitch is joined by editor Elísabet Ronaldsdóttir for an enlightening conversation on the technical aspects of the production while also sharing a few anecdotes from the set and making comparisons to the original source material as well as their work on John Wick.

Anatomy of a Fight Scene (HD, 8 min): Done in picture-in-picture style, an in-depth look at the brutal fight sequence done as long take with commentary and lots of BTS footage revealing the choreography.

Blondes Have More Gun (HD, 7 min): Focused on Charlize Theron and the immense training she endured for the role while also commenting on the direction and various challenges encountered.

Spymaster (HD, 4 min): Praise for Leitch and his visual aspirations for the movie.

Nice to Meet You

Not Afraid of Love

Immediately, in the opening minutes, Atomic Blonde sets the tone, pace and rhythm for the remainder of the film's 115-minute runtime, an aggressive and animated motion picture with a flamboyantly colorful and kinetic energy that feels sadly missing from many contemporary actioners. Starring Charlize Theron and James McAvoy as questionable spies supposedly working on the same side, the action thriller is a white-knuckle cat-and-mouse game of high-stakes espionage with brutal, riveting action choreography, making the list of one of the best movies of 2017. The Blu-ray goes covert with a vibrant, reference-quality video presentation and an awesomely satisfying DTS:X soundtrack that'll turn the home theater into kickin' house party. Featuring a disappointingly small set of supplements, the overall package is nonetheless recommended for action junkies who love their badass heroines.