The extraordinary true story of an unexpected friendship in the later years of Queen Victoria's (Academy Award winner Judi Dench) remarkable rule. When Abdul Karim (Ali Fazal), a young clerk, travels from India to participate in the Queen's Golden Jubilee, he is surprised to find favor with the Queen herself. As the Queen questions the constrictions of her long-held position, the two forge an unlikely and devoted alliance with a loyalty to one another that her household and inner circle all attempt to destroy. As the friendship deepens, the Queen begins to see a changing world through new eyes and joyfully reclaims her humanity.

Until a couple of years ago when her great-great-granddaughter Elizabeth II surpassed her, Queen Victoria held the record as the world’s longest serving monarch. The crusty British queen reigned over a massive empire for more than six decades (1837-1901), yet throughout much of that time she was also a grieving widow ceaselessly mourning the death of her beloved husband, Prince Albert, who passed away in 1861. Victoria dressed in black every day and her vast governing power was eclipsed only by her debilitating loneliness, which consumed her more than any wars or legislation over which she presided. Her brusque personality and imposing, intimidating demeanor were both legendary and off-putting, so when a young Indian emissary unexpectedly cracked her shell and gained her favor, more than a few mouths went agape at Buckingham Palace.

With charm and warmth, Victoria & Abdul details the intense - and highly unusual - friendship that blossomed between the Queen of England (Judi Dench) and Abdul Karim (Ali Fazal), a low-level clerk plucked from obscurity and dispatched to deliver a special coin to Victoria from her Indian subjects to commemorate her Golden Jubilee in 1887. Director Stephen Frears’ film shows how the relationship revitalized the aging queen, renewed her intellectual curiosity, and expanded her view of the world and its diverse population. The script by Lee Hall (Billy Elliot) is “based on real events...mostly,” yet despite its expected embellishments and inventions, remains fairly faithful to history. Authentic locations, a bit of pageantry, and superior production values augment the thin story, which maintains interest but doesn’t wield much impact.

As the story opens, Abdul and a Muslim cohort are whisked off to England from their home in the shadow of the Taj Mahal to convey India’s gratitude for the crown’s protection. Their appearance before the queen lasts only a few seconds and beforehand officials sternly admonish them not to make eye contact with her. Abdul, however, steals a quick glance while retreating from the banquet hall and manages to briefly catch her gaze. The jaded Victoria, who is bored with the pomp and circumstance of palace life, annoyed with her sycophantic courtiers, and battling various health issues, sees something in Abdul’s youthful, tranquil face and requests an audience with him. Abdul speaks freely in her presence and the queen appreciates his candor.

A deep friendship soon develops, much to the chagrin of Victoria’s advisors (led by Sir Henry Ponsonby [Tim Pigott-Smith]), the staff at Buckingham Palace, and her eldest son Bertie (Eddie Izzard), the Prince of Wales and impatient heir to the throne, all of whom view Abdul as a sly opportunist and threat to the status quo. Though Victoria never expressed much interest in India before, she now seeks to learn more about the nation and its people, and entreats Abdul to teach her the Urdu language and enlighten her about the country's religion and customs. As they grow closer, the queen’s staff steps up efforts to discredit Abdul in the hope Victoria will send him home. Yet the stubborn queen refuses to detach herself from her intimate companion and continues to raise his stature, sparking concerns about her sanity and fitness to reign.

Just as Bette Davis portrayed Elizabeth I at two different periods in the monarch's life, so too does Dench with Victoria. In 1997, she starred in Mrs. Brown, which chronicles the queen’s close, controversial relationship with her manservant John Brown, with whom she was rumored to have had a full-blown affair. Victoria & Abdul tells a much different tale, but the scandalous undertones are strikingly similar. This film focuses more on the queen’s cultural awakening and examines both social and racial prejudice, yet the emphasis on light comedy and quirky character traits consistently outweigh the substance. Little winks and nods peppered throughout the picture blow some fresh air into the stuffy royal environment, but frankly, I would have preferred more gravitas.

Dench, who won a Best Supporting Actress Oscar for her portrayal of Elizabeth I in Shakespeare in Love, was born to play aged queens, and she fits the cantankerous Victoria like a glove. From the first frame to the last, Victoria & Abdul is undeniably her film, and she makes the most of every arched eyebrow, withering glance, and icy display of temper. Yet she's also heartbreakingly tender. Watching Victoria's defenses dissolve and outlook brighten when she's in Abdul's presence is like witnessing the taming of a savage beast, and Dench beautifully evokes the transformation. Her comfortable chemistry with Fazal draws us into the tale (although he's far better looking than the real Abdul), and a strong supporting cast nicely complements her fine work.

Light, airy, well-made, and laced with a bit of melancholy, Victoria & Abdul is perfect fare for fans of understated British drama. It's not much more than a trifle, but the engaging performances, beautiful scenery, and elegant presentation fuel this buoyant film. Frears, whose last picture - Florence Foster Jenkins - also showcased an eccentric old dame, once again celebrates a passionate spirit, and his deft directorial touch injects a healthy dose of joie de vivre into this veddy, veddy British vignette. Victoria & Abdul may not have lasting impact, but it captures the essence of one of history's loftiest women...and that's no small feat. 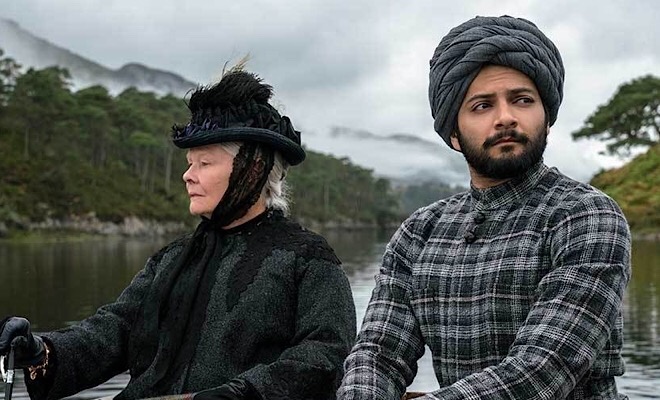 Victoria & Abdul arrives on Blu-ray packaged in a standard case inside a sleeve with raised lettering. A leaflet containing a code to access the Digital HD copy is tucked inside the front cover, along with a DVD copy of the film. Video codec is 1080p/AVC MPEG-4 and default audio is DTS-HD Master Audio 5.1. Once the disc is inserted into the player, previews for Despicable Me 3, Logan Lucky, and Breathe precede the full-motion menu with music. If your player has a wireless or wired Internet connection, a fresh trailer will be downloaded from Universal’s website. (I got Pitch Perfect 3.)

Sumptuous sets and lush locations add a touch of splendor to Victoria & Abdul, and this vibrant, often eye-popping 1080p/AVC MPEG-4 transfer from Universal beautifully showcases them. From the Taj Mahal to the Scottish Highlands, exterior scenes burst with bold colors and a pronounced sense of depth, while top-notch contrast and clarity highlight fine details. Black levels are rich and inky, whites are bright but never bloom, and flesh tones remain stable and natural throughout. Shadow delineation is quite good, close-ups show off every crease and wrinkle in Dench’s careworn face, and not a single nick or mark sullies the spotless source material. Impeccable production values often define period films, and this terrific transfer allows us to appreciate them all to the fullest.

For a relatively quiet film, Victoria & Abdul boasts an active and involving DTS-HD Master Audio 5.1 soundtrack that helps immerse us in this intimate drama. Though surround activity is largely limited to the music score, palpable stereo separation across the front channels nicely widens the soundscape. Atmospherics like wind (especially during the Scottish lunch scene) and rain faintly bleed into the rear speakers, and an expansive dynamic scale handles all the highs and lows without any distortion. Not surprisingly, bass frequencies are a bit weak, but excellent fidelity and tonal depth heighten the impact of Thomas Newman’s music. All the dialogue is well prioritized and easy to comprehend, and no imperfections cloud the mix. While far from reference quality, this is a strong track that helps enhance the film’s appeal.

Featurette: “The Look of Victoria & Abdul” (HD, 7 minutes) - This standard EPK examines the movie’s “tremendous attention to detail” through its realistic locations, costumes, and props. In addition, a few tricks of the trade are revealed and lots of praise is lavished upon director Stephen Frears through cast and crew interviews.

Twenty years after taking her first stab at Queen Victoria in Mrs. Brown, the indomitable Judi Dench reprises the regal role and gives another top-flight performance. Though substance comes at a premium in Victoria & Abdul, this light-hearted, often touching film from director Stephen Frears delightfully depicts the unlikely true-life friendship between a crotchety, aged queen and a young Indian peasant, and how it defies the British monarchy’s rigid traditions. Universal’s Blu-ray presentation skimps a bit on supplements, but the terrific video and audio transfers showcase the period atmosphere and heighten the appeal of this charming portrait of a unique liaison. Recommended.

Sale Price 9.99
List Price 14.98
Buy Now
3rd Party 5.79
In Stock.
See what people are saying about this story or others
See Comments in Forum
Previous Next
Pre-Orders
Tomorrow's latest releases