In 1952, Saigon is caught between the corrupt colonial powers and the Communist uprising. An idealistic young American (Audie Murphy) champions a shadowy Third Force, but cynical British journalist Thomas Fowler (Michael Redgrave) is concerned only with the American's interest in his mistress. When jealousy forces Fowler to take sides at last, the personal and political consequences are devastating.

"He was determined to do good."

Graham Greene, like many acclaimed novelists, has had his share of Hollywood hits and misses. Though the adaptations of his early thrillers (This Gun for Hire, Ministry of Fear, and Brighton Rock) were not particularly faithful, their undeniable success fueled interest in the author's more serious works, many of which suffer at the hands of a censorship code that tempers their adult themes and/or alters their focus. The 1958 version of The Quiet American is one such film. Overwrought moralism and the winds of anti-Communist fervor sweeping the U.S. at the time taint writer-director Joseph L. Mankiewicz's production, which chronicles a peculiar love triangle amid political strife in Southeast Asia. The result is a movie that - despite some excellent acting and a literate script - conveys a far different message than Greene intended, much to his everlasting chagrin.

Unnecessary tinkering may plague The Quiet American, but it remains an absorbing and thoughtful study of jealousy, conscience, and the seductive power of a foreign and mysterious culture. Yes, the film revamps key elements of the story. (Greene once said, "The most extreme changes I have seen in any book of mine were in The Quiet American.") What's supposed to be a cautionary tale of brazen, pompous, and misguided American intervention in foreign affairs becomes a flag-waving put-down of Communist ideals and a reverent salute to a character who's not meant to be canonized. (Philip Noyce's classy 2002 remake follows Greene's novel far more closely.) The shift in context doesn't really harm the story, but puts a different - and somewhat inaccurate - spin on the history Greene so perceptively chronicles and interprets in his book.

Michael Redgrave (father of Vanessa and Lynn) portrays Greene's alter ego, Thomas Fowler, a British journalist stationed in Saigon who reports on the percolating tensions between French colonialists and militant Chinese Communists in 1952 Vietnam. Though (unhappily) married and Catholic, Fowler is involved with the much younger Phuong (Giorgia Moll), an apolitical Vietnamese girl more concerned with love and security than the explosive conflict consuming her country. When an altruistic American aid worker (Audie Murphy) is found murdered, investigators question Fowler, who recalls their strained friendship and romantic rivalry.

The American hails from Texas, and his easygoing charm and country-boy naiveté mask what Fowler believes to be a more serious and covert agenda. Fowler also becomes jealous when the American tries to woo Phuong away from him by promising her the type of respectable domestic life Fowler can't provide. (Fowler's wife refuses to divorce him for religious reasons.) Part murder mystery and part love triangle, with plenty of political intrigue inflaming everyone's passions, the film paints a vivid portrait of a turbulent country on the brink of what would become a lengthy and controversial war. It also cogently examines the inability of both Europeans and Americans to properly assess a culture they foolishly believe they can influence and dominate.

Greene brilliantly exposes the attitudes and arrogance that drove the U.S. to become involved in Vietnam, and subtly criticizes America's eagerness to meddle where it doesn't belong, hinting its earnest, do-good agenda is merely a ruse that enables America to get its foot in the door and assert its authority. The American's blundering nature in the film reflects his country's penchant for bulldozing its way into a situation without invitation or a proper understanding of the nitty-gritty, and its prevailing belief that the American viewpoint is the only viewpoint. With deft insight, Mankiewicz's adaptation depicts the new world order clumsily impinging on the old, with the relationship of the three principals incisively reflecting the various political stances that cover the broader international canvas.

The script nicely delineates the characters, especially Fowler, whose "I don't take sides" attitude recalls Humphrey Bogart's neutral Rick Blaine ("I stick my neck out for no one") in Casablanca. But the film transforms what was regarded by some as a pro-Communist, anti-American tale into an advertisement for American globalism. According to Mankiewicz biographer Kenneth L. Geist, Mankiewicz wanted to dramatize how "emotions can very often dictate personal beliefs," but the decided anti-Communist slant must have been inserted to appease the censors and tap into the era's prevailing beliefs, as dictated by Senator Joseph McCarthy and others. Greene was (rightly) outraged by the changes, but despite the different direction, the film still presses some intriguing and complex points.

The location shooting in Vietnam adds essential authenticity, and Redgrave's performance is a thing of beauty. Reportedly, Mankiewicz originally wanted Montgomery Clift and Laurence Olivier to play the American and Fowler, respectively. (When Clift dropped out due to health reasons, so did Olivier.) While Clift certainly would have brought more dimension and emotion to the role of the American than the wooden Murphy, it's hard to imagine anyone - even the great Olivier - besting Redgrave's work. Murphy's blandness oddly suits his earnest character, but his is hardly a memorable performance, and the Italian Moll is badly miscast as the alluring Asian concubine. Why Mankiewicz didn't assign the role to a native actress remains puzzling.

Though French critic Jean-Luc Godard called The Quiet American the best picture of 1958, Mankiewicz himself later termed it "the very bad film I made during a very unhappy time in my life." (His wife of 20 years, Rosa Stradner, who was plagued by emotional problems, committed suicide shortly after its completion.) Neither assessment is completely accurate. Like most Mankiewicz movies, The Quiet American is rather talky, but few men write better dialogue or coax finer performances from their actors. It's too bad this version isn't more faithful to Greene's novel, but its geopolitical themes remain strikingly relevant and continue to resonate six decades after the film's initial release. Has America learned any lessons since Vietnam? Watch The Quiet American and decide. 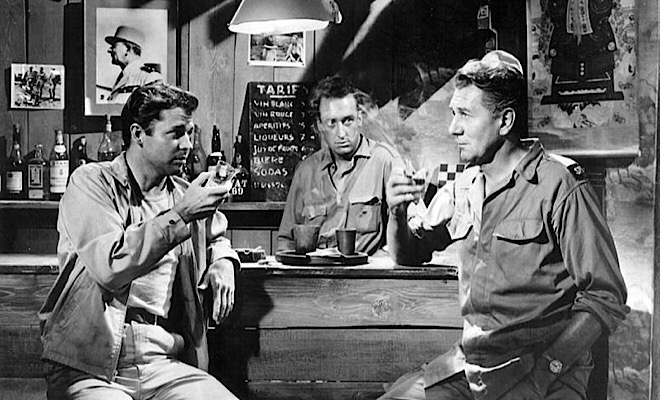 The 1958 version of The Quiet American arrives on Blu-ray in a limited to 3,000 edition packaged in a standard case. An eight-page booklet featuring an essay by film writer Julie Kirgo, a few black-and-white scene stills, and a full-color reproduction of the movie's poster art is tucked inside the front cover. Video codec is 1080p/AVC MPEG-4 and audio is DTS-HD Master Audio 1.0. Once the disc is inserted into the player, the static menu without music immediately pops up; no previews or promos precede it.

Sadly, independent films from Hollywood's Golden Age often aren't as well preserved as their major studio counterparts, and it's apparent from this 1080p/AVC MPEG-4 transfer from Twilight Time that The Quiet American has bounced around a bit over the past several decades. Though contrast and clarity are quite strong, consistent speckling, some print damage, and a couple of fixed black dots mar the presentation. A nicely integrated grain structure maintains the feel of celluloid and adds a gritty texture to the location scenes, but intermittent softness occasionally disrupts the film's flow. Blacks are generally dense, whites are bright and well defined, and the well-balanced grays in between heighten detail and depth levels. Sharp close-ups highlight the glistening sweat that consistently bathes the actors' faces, and no digital doctoring or enhancements could be detected. Yes, the transfer has faults, but they aren't significant enough to hinder one's enjoyment of this absorbing drama. We can only hope a full-scale restoration lies somewhere in The Quiet American's future.

The DTS-HD Master Audio 1.0 track supplies clear, well-modulated sound. A wide dynamic scale handles all the highs and lows without a hint of distortion, and such bombastic sonic accents as explosions and gunfire are crisp and distinct. Fine fidelity, tonal depth, and resonant bass frequencies enhance the richness of the music score, which fills the room with ease, and most of the dialogue is clear and comprehendible. (Some lines spoken by Giorgia Moll are unintelligible, but that's due to her thick accent and lack of diction rather than any audio deficiencies.) Best of all, any age-related imperfections like hiss, pops, and crackles have been erased. This isn't a particularly active track, but it shines when it needs to and seamlessly complements the on-screen action.

Just a couple of negligible supplements round out the disc.

Isolated Score Track with Some Effects - Those who appreciate Mario Nascimbene's music score can enjoy it here without any intruding dialogue.

If you're looking for a faithful adaptation of Graham Greene's acclaimed - and surprisingly prescient - novel, try the 2002 remake starring Michael Caine and Brendan Fraser. But if you're open to a different interpretation of a richly textured tale, you should check out writer-director Joseph L. Mankiewicz's take on The Quiet American. A superior performance by Michael Redgrave and literate screenplay distinguish this thoughtful, somewhat languorous drama of political intrigue, romance, and personal strife during the early days of the Vietnam conflict. Twilight Time's limited edition Blu-ray presentation skimps on supplements, but features solid video and audio transfers. The Quiet American doesn't rival Mankiewicz's best films, but it's a probing study of angst, duplicity, and betrayal that's well worth a look for classic movie fans.