The Keys of the Kingdom

An impressive spiritual epic, The Keys of the Kingdom (1944) is adapted from A.J. Cronin’s novel about a Scottish missionary’s life in China by two superlative screenwriters, Joseph L. Mankiewicz (who also produced) and Nunnally Johnson. Headlined by shooting star Gregory Peck (who earned an Oscar® nod for his performance), this pluperfect example of A-picture elegance also features stunning cinematography by Arthur Miller (The Song of Bernadette) and a score from one of Hollywood’s greatest composers, Alfred Newman, available on this Twilight Time release as an isolated track.

Gregory Peck's most famous role was Atticus Finch, the stoic, honorable, wise, and courageous attorney and father in the classic 1962 film To Kill a Mockingbird, but 18 years earlier a similar part made him a star. Though playing a dedicated priest who spends his life in humble service helping those less fortunate may not be the traditional path to becoming a screen heartthrob, it worked for Peck, who became an instant sensation when the reverent religious epic The Keys of the Kingdom opened in 1944. Director John M. Stahl's adaptation of A.J. Cronin's popular novel may not be familiar to many Peck fans (despite the fact it earned Peck his first Best Actor Oscar nomination), but it remains one of the most important movies of his long and storied career.

20th Century-Fox studio chief Darryl F. Zanuck spent a lot of money on The Keys of the Kingdom, one of several religious-themed films designed to inspire a weary public during the dark days of World War II, and its sober, introspective tone and important message make it a worthwhile movie. Yet conflicts are muted and drama comes at a premium in the lyrical but dry screenplay by producer Joseph L. Mankiewicz and Nunnally Johnson. A prestige picture with a capital P, The Keys of the Kingdom boasts a strong cast, top-notch production values, and an exotic international flavor, but while such sterling components dazzle the senses, they don't stoke the emotions. Priests usually radiate passion, but Stahl's film remains strangely and frustratingly remote. It's never boring per se, it just plods amiably along, always reflecting the even temper of its main character.

Reminiscent of Goodbye, Mr. Chips and Martin Scorsese's recent Silence (without the graphic violence), The Keys of the Kingdom chronicles in flashback the life and work of Father Francis Chisholm (Peck) over a 60-year period from 1878 to 1938. As the film opens, an elderly Chisholm awaits the judgment of a Catholic Church Monsignor (Sir Cedric Hardwicke) who's sent to evaluate Chisholm's unorthodox, occasionally rebellious practices and decide whether he should be pushed into retirement. The Monsignor begins reading Chisholm's journal, which details his difficult childhood in Scotland, early failings as a parish priest, and finally his long-term assignment in China, where he's sent by Father Hamish MacNabb (Edmund Gwenn) to develop a Catholic presence and help convert the locals in the remote province of Tai-Pan.

"It won't be an easy life or a safe one," MacNabb tells him, but he believes Chisholm has the "inquisitiveness and tenderness" to pull off the daunting task. Unlike his stuffy colleague, Angus Mealy (Vincent Price), Chisholm has no interest in climbing the church ladder and becoming a bishop. He seeks religious truth by making sacrifices, helping the poor, doing what's right, and taking the road less traveled. He initially meets resistance from the Chinese, who are suspicious of his motives, but his perseverance pays off. He builds a mission and school, heals the sick, assimilates into the culture (and learns the teachings of Confucius), clashes with a team of nuns who are sent to support him, and even weathers a civil war during his decades-long tenure, which shapes his views and widens his religious perspective.

The Keys of the Kingdom marked the first film at Fox for producer Mankiewicz, who had honed his talents mounting glossy Joan Crawford vehicles at MGM and a few years later would win unprecedented back-to-back writing and directing Oscars for A Letter to Three Wives and All About Eve. Ironically, Mankiewicz was a confirmed atheist who once quipped, "All religion is utter nonsense," yet he manages to craft a reverent production that presents a progressive look at the Catholic faith and celebrates the simple service of one devout man. (Maybe the fact that one of the supporting characters is not a believer attracted Mankiewicz to the tale.) Stahl's straightforward direction honors the material - but does nothing to bolster it - and Peck's earnest performance keeps any syrupy elements at bay. At 27, he is a striking screen presence, and though he's at his best when playing his own age, Peck does a fine job as the elder Chisholm, and the range he displays undoubtedly helped him secure his Oscar nomination. (He lost to Ray Milland's alcoholic writer in Billy Wilder's The Lost Weekend.)

In addition to Price, Gwenn, and Hardwicke, such notable actors as Thomas Mitchell, Roddy McDowell (who plays Chisholm as a boy), James Gleason, Anne Revere, and Peggy Ann Garner all contribute excellent work. Mankiewicz's wife, Rosa Stradner, also plays a key role as a rigid, arrogant Mother Superior who disapproves of Chisholm's liberal philosophy. Though her understated performance enhances the film, it did not lead to other parts, resulting in a bitterness that would torment the troubled Stradner for the rest of her life.

The Keys of the Kingdom is a well-made, thoughtful, intimate, and often absorbing motion picture, but it's not memorable. The languorous presentation, excessive length, and tepid drama stymie what should be a more rousing and impactful production. Though the film gave Peck his career (and for that we are eternally grateful), far better roles and far better movies would await him. 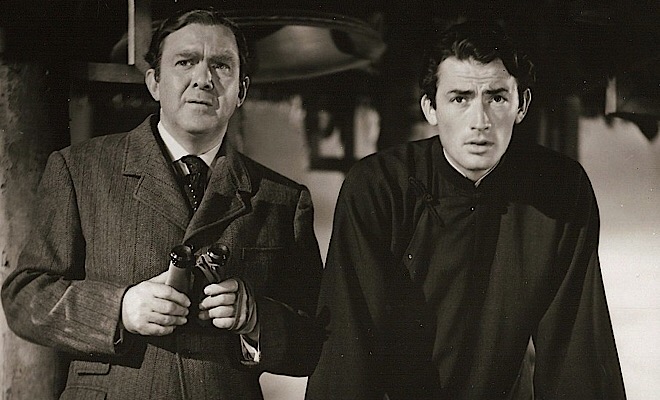 The Keys of the Kingdom arrives on Blu-ray in a limited to 3,000 edition packaged in a standard case. An eight-page booklet featuring an essay by film historian Julie Kirgo, a few black-and-white scene shots, and a reproduction of the movie's original poster art is tucked inside the cover. Video codec is 1080p/AVC MPEG-4 and audio is DTS-HD Master Audio 2.0 mono. Once the disc is inserted into the player, the static menu without music immediately pops up; no previews or promos precede it.

Once again, Twilight Time - courtesy of Fox - delivers an exceptional 1080p/AVC MPEG-4 rendering of a classic film. Terrific contrast and clarity bring out all the beauty of Arthur Miller's black-and-white cinematography, which has been meticulously restored to its original splendor. A faint grain structure lends the image a hint of texture while preserving its film-like feel, and excellent gray scale variance enhances depth, detail, and scope. Black levels are rich and deep, the whites of the nun habits are appropriately crisp, and shadow delineation is quite good. The driving rain that drenches one of the opening scenes is quite vivid, and the ruggedness of the back lot exteriors that double for China is nicely conveyed. The close-ups of Peck showcase his chiseled and youthful features well, and just a couple of errant marks dot the pristine source material. The Keys of the Kingdom was one of Fox's prestige pictures of 1944, and this superior transfer honors the film's lofty lineage.

Sound isn't an especially vibrant element in The Keys of the Kingdom, but the DTS-HD Master Audio 2.0 mono track nevertheless supplies clear, well-modulated audio. A wide dynamic scale allows Alfred Newman's gloriously lush score plenty of room to breathe, and all the dialogue is easy to comprehend. Sonic accents like thunder and train whistles are crisp and distinct, and the subtle chirping of birds adds welcome atmosphere to exterior scenes. Though a faint amount of surface noise occasionally can be detected during quiet moments, more disruptive age-related elements - namely, pops and crackles - are absent. This is hardly a flashy track, but its understated nature nicely complements the film's content.

Just a couple of supplements, both of which have been ported over from the previous DVD release, are included on the disc.

Audio Commentary - Sadly, the commentary by Christopher Mankiewicz, son of writer-producer Joseph L. Mankiewicz and actress Rosa Stradner, and Mankiewicz biographer Kenneth Geist ranks as one of the most disappointing - okay, boring - tracks I've ever had to slog through. Both men say precious little over the course of 137 minutes (their remarks were recorded separately), and what they do say isn't particularly enlightening or informative. We learn a bit about Joseph Mankiewicz's atheism, the reason behind his move from MGM to Fox, and his boundless intellectual curiosity, and there's a good deal of discussion about Peck's personality and career, as well as Stradner's shoddy treatment by the industry. But aside from some plot analysis and brief bios of other actors, not much attention is paid to The Keys of the Kingdom. Chris Mankiewicz shares some family memories, but he does not delve into his parents' troubled marriage or even allude to his mother's tragic suicide at the age of 45. (Geist steers clear of the subject, too.) While I don't necessarily expect Mankiewicz to dredge up painful episodes, the fact that The Keys of the Kingdom is the only movie his parents worked on together does make the topic relevant. Lengthy gaps abound and the dreary delivery of both men hardly make our ears prick up when they do chime in. This track is a total waste of time, and even fans of Peck, Mankiewicz, and the film should by all means skip it.

Theatrical Trailer (HD, 3 minutes) - The original preview for The Keys of the Kingdom predicts the film "will be cherished as unforgettable entertainment."

Isolated Score Track - Alfred Newman's soaring score can be enjoyed in its entirety without any dialogue on this isolated track.

Reverent, earnest, inspirational, but slightly stiff, The Keys of the Kingdom chronicles the struggles of a young priest to promote Catholicism in an underdeveloped province of China at the turn of the 20th century. Though the film meanders and runs a bit long, the superior production values, literate script, and fine performances by a strong cast keep us engaged throughout. A young Gregory Peck in his breakout role carries the picture, but can't quite infuse it with the depth of emotion it craves. Twilight Time's Blu-ray presentation features excellent video and audio transfers, but a weak commentary dulls the appeal of the disc. Those who appreciate well-made religious dramas will certainly want to check out The Keys of the Kingdom, which is worth a look, especially for fans of Peck.