You Only Live Once

The public defender's secretary and an ex-convict get married and try to make a life together, but a series of disasters sends their lives spiraling out of control

Every so often a movie comes along that addresses important themes, features fine performances, and brims with style and artistry. It may not win the public's favor when first released, but its reputation grows over time until it becomes a bona fide classic. You Only Live Once is one such film...with one notable exception. Director Fritz Lang's stirring, fatalistic tale of social injustice - while renowned by critics - still hasn't gained the measure of popular attention and appreciation it so richly deserves. And that's a shame because few films of the 1930s pack such a potent punch and so accurately capture the turbulent timbre of the times.

Powerful, provocative, tender, and visually stunning, You Only Live Once paints a bleak portrait of a close-minded, suspicious, often heartless society that's loath to give a reformed criminal a break. Depression-era viewers hungry for optimistic escapism spurned the film due to its downbeat nature, but had they bothered to take a closer look, they surely would have identified with and drawn comfort from the desperation and fighting spirit of the dimensional characters who are struck down at every turn. Today, those characters continue to resonate, and their perseverance and steely will remain an inspiration, as does their steadfast devotion. For You Only Live Once is not just a searing crime drama that makes pointed statements about a conflicted, evolving society, it's also an emotional love story that percolates with passion.

Eddie Taylor (Henry Fonda) is far from a paragon of virtue. Sent to prison at a young age, he squandered a couple of chances to go straight by succumbing to the allure of easy money and mob crime. When he's released from jail after his third go-round, the warden warns him one more conviction will result in a mandatory life sentence. Though tough and jaded, Eddie promises to be a model citizen, and his devoted girlfriend, Joan (Sylvia Sidney), who's patiently waited for him for three years, is bound and determined to help him achieve that goal. "There's a lot more good in Eddie Taylor than most people think," she says.

Yet "most people" won't give Eddie a chance, and neither Joan nor Eddie is any match for a society that systematically and continually thwarts them. Eddie can't escape his past and the negative perceptions that piggyback on it, and as one door after another shuts in his face, he becomes frustrated, disheartened, and angry. Adding insult to injury, Eddie once again becomes the target of police after an armored car robbery leaves multiple people dead. Though he vehemently proclaims his innocence, he has no alibi, and Joan, who is now his wife, convinces him to cooperate with the authorities in the hope justice will prevail. Of course, it doesn't, and the devastating verdict transforms Eddie into the hardened, paranoid, and dangerous criminal everyone always believed him to be. It also sets in motion a string of dramatic events that could either save or destroy Eddie and Joan.

The 1930s were littered with "crime doesn't pay" flicks that exposed society's underbelly and the dead-end dangers lurking there. Most were moralistic in tone and fairly contrived, but what sets You Only Live Once (which was partially inspired by the exploits of legendary bank robbers Bonnie Parker and Clyde Barrow) apart from those preachy, cautionary pictures is its forthright, non-judgmental presentation. Eddie and Joan are victims as well as criminals, and we both sympathize with their hopeless plight and root for their salvation. Society is the villain of the piece, and the rigid, judgmental attitudes it espouses breed distrust and foster a desperation that builds exponentially until it explodes. (Nicholas Ray's strikingly similar They Live by Night - made a decade later - also explores these themes with sensitivity and finesse.)

Lang consistently cited You Only Live Once as one of his favorite films, maybe because it's also one of his most personal. A German expatriate who vehemently renounced the Nazi regime, Lang was all too familiar with prejudice, persecution, and profiling, and with unflinching honesty, many of his movies focus on people caught in the crosshairs of such issues. Life is rarely black and white, and You Only Live Once expertly depicts the shades of gray that often cloud and complicate our existence.

It's also a beautiful, beautiful film. Lang was a master of expressionism, which dominated German movies of the 1920s and strongly influenced the evolution of film noir, and he uses everything in his bag of tricks here. The imagery and shot compositions - from stark shadows and gauzy mist to lush reflections and tight, confining close-ups (see photos below) - are often breathtaking and intensify the emotions and tension coursing through the story. Cinematographer Leon Shamroy won three Oscars in four years during the 1940s, and after watching this film, it's easy to see why.

Fonda had only made six movies prior to You Only Live Once and was not yet a bankable star, but his impassioned, riveting performance elevated his reputation. Always a natural actor, Fonda gets under the skin of his everyman character, and his dimensional portrayal brilliantly balances warmth, anger, and inner turmoil. Sidney is excellent, too, bringing spunk and raw emotion to her long-suffering role. Though diminutive and delicate on the outside, Sidney played many strong women throughout her long career, and her inner resolve and outward devotion to Fonda's Eddie lend this romantic crime drama its heart.

A superior supporting cast featuring some of the most recognizable faces (if not names) of Hollywood's Golden Age adds even more zip to this brisk, absorbing drama. Barton MacLane, Jean Dixon, and William Gargan are especially good, and eagle eyes will spot a young Jack Carson in his film debut as a gas station attendant and Jerome Cowan - best known as the affable attorney who prosecutes Santa Claus in Miracle on 34th Street - in just his second movie as a prison doctor.

Fritz Lang has directed some very famous, gripping, and stylish films - Metropolis, M, Fury, The Woman in the Window, Scarlet Street, and The Big Heat, to name a few. You Only Live Once may not possess the same name recognition, but stands firmly among them, and deserves to be rediscovered and properly revered. Hopefully, this terrific Blu-ray release from Classicflix will help achieve that goal and continue to enhance the reputation of this deeply affecting work of cinematic art. 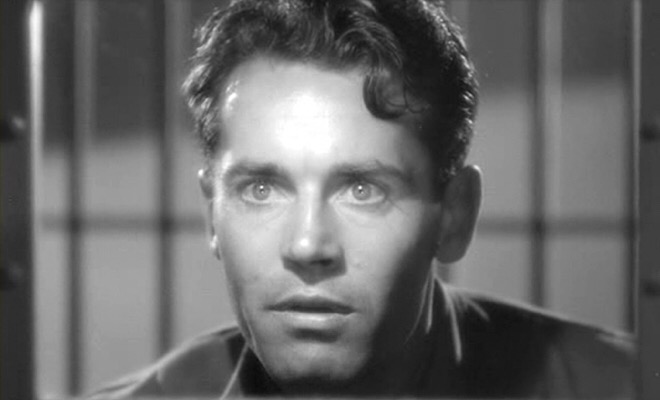 You Only Live Once arrives on Blu-ray packaged in a standard case. Video codec is 1080p/AVC MPEG-4 and audio DTS-HD Master Audio 2.0 mono. Once the disc is inserted into the player, the static menu without music immediately pops up; no previews or promos precede it.

According to notes preceding the restoration comparison (see below), this stunning remastered transfer was struck from 35 mm archival elements supplied by the British Film Institute. Technicians worked for more than 200 hours on restoring the print, and the results are quite spectacular. Though a touch of softness remains, clarity and contrast are outstanding and exquisitely showcase Leon Shamroy's gorgeous cinematography. Grain is noticeable, but adds marvelous texture to this gritty tale, and close-ups brim with fine details. Blacks are rich and dense, whites are bright but never bloom, and all the grays in between exude a pleasing degree of variance. Shadows, fog, and night scenes often dominate the frame, but details are never compromised and crush is rarely an issue. Background elements are always easy to discern, depth is palpable, and only a few errant nicks and marks dot the source material. For a film that has not been well cared for throughout its lengthy history, this superior transfer is a revelation, and well-deserved kudos go to Classicflix for rescuing and preserving this timeless, often neglected classic. Bravo!

The DTS-HD Master Audio 2.0 mono track supplies clear, well-modulated sound...no small feat considering the audio is 80 years old. Subtleties like chirping crickets and driving rain provide essential atmosphere, while sonic accents such as blaring alarms and sirens, revving car engines, and the rat-a-tat-tat of gunfire are crisp and distinct. All the dialogue is clear and easy to comprehend, despite the primitive recording equipment, and Alfred Newman's music score (for which he did not receive screen credit) enjoys a surprising amount of resonance and tonal depth. Just a hint of hiss can be detected in quiet scenes, but no pops, crackles, or other surface noise disrupt this wonderfully clean presentation.

The previous DVD was devoid of extras.

Fritz Lang directed many exceptional movies, and You Only Live Once resides near the top of that lofty list. This devastating tale of one man's brutal victimization by a cruel and heartless society still packs a potent punch eight decades after its initial release, thanks to passionate performances from Henry Fonda and Sylvia Sidney and especially Lang's dazzling direction. Breathtaking images abound and enhance the provocative social themes that pervade the story. Classicflix honors this moving motion picture with top-notch video and audio restorations that enhance its appeal and help this powerful, engrossing, and visually arresting film regain its luster. Highly Recommended.