They Live by Night - Criterion Collection

Legendary director Nicholas Ray began his career with this lyrical film noir, the first in a series of existential genre films overflowing with sympathy for America’s outcasts and underdogs. When the wide-eyed fugitive Bowie (Farley Granger), having broken out of prison with some bank robbers, meets the innocent Keechie (Cathy O’Donnell), each recognizes something in the other that no one else ever has. The young lovers envision a new, decent life together, but as they flee the cops and contend with Bowie’s fellow outlaws, who aren’t about to let him go straight, they realize there’s nowhere left to run. Ray brought an outsider’s sensibility honed in the theater to this debut, using revolutionary camera techniques and naturalistic performances to craft a profoundly romantic crime drama that paved the way for decades of lovers-on-the-run thrillers to come.

"You'll get in so deep tryin' to get square, they'll have enough on you for two lifetimes!"

Doomed love has been a well-worn Hollywood theme since the dawn of motion pictures, but in the world of film noir, it's a rarity. Lust and forbidden fruit drive many of the heroes and femme fatales who populate the dark genre to violent extremes, and almost always, they become the masters of their own tragic fates. Not so in Nicholas Ray's stunning directorial debut, They Live by Night. Society - not the mob or a blonde siren - is the villain of this deeply affecting drama, and it conspires against its tainted romantic protagonists at every turn. In normal noir, we expect retribution, but in this revolutionary movie that embraces core noir elements but concentrates more intensely on spiritual love, we hope the characters can escape it, because despite some questionable deeds, they really don't deserve it.

Ray defined his career by championing outsiders, tortured individuals, and rebels with and without causes, and he set the tone in his very first feature. By focusing on two naïve, hard-knock kids who try to vanquish their dead-end existence and find comfort and grace in a world of grime and corruption, he captures the heartbeat of a generation and puts an achingly tender spin on a rough-and-tumble genre. The film also combines grit and poetry in much the same manner as The Grapes of Wrath, and paves the way for other lovers-on-the-run tales like Breathless and Bonnie and Clyde.

Opening with an innovative and complex aerial helicopter shot that thrusts us into the action, They Live by Night chronicles the transient existence of Bowie Bowers (Farley Granger), a 23-year-old convict who was jailed at 16 for a murder he didn't commit. He escapes prison with a couple of grizzled thieves, the one-eyed Chicamaw (Howard Da Silva) and square-jawed T-Dub (Jay C. Flippen), and together they plot a bank robbery while holed up at a remote ranch. Keechie (Cathy O'Donnell) lives there with her alcoholic father, and soon she and Bowie begin to bond. Lonely, sheltered, and vulnerable, the two have much in common, and after the heist, they take Bowie's share of the spoils and hit the road, hoping to evade the authorities, find a safe haven, and forge a clean, straight life.

All of which is far from easy. Neither Bowie nor Keechie know much about the real world or how to survive in it, but together they tentatively discover life's simple pleasures and the nuances of love. Yet Bowie's partners in crime don't share his desire to go straight, and when they resurface on his doorstep, they pressure Bowie to rejoin their crooked ranks. Bowie's divided loyalties push him into a corner, and any choice he makes will threaten all he holds dear.

The first half of They Live by Night follows the traditional trajectory of film noir, but the second half takes a sharp turn, veering off into romantic fantasy territory, as Bowie and Keechie try to escape the dire reality that engulfs them. Ray deftly juggles the two components, ultimately coining what could be termed a new style - romance noir. It's a fascinating concept, but not simple to execute. Few directors can strike a balance between tender scenes featuring lush lighting and telling close-ups (see the photo below) and a muscular style marked by aerial shots, dusty locations, and mobile camera work, but with seemingly little effort, Ray does. And the fact that he does so in his very first movie is especially impressive.

Ray injects raw emotion into a cold-blooded genre, but without the superior performances of Granger and O'Donnell, the film wouldn't resonate as strongly. Both actors were almost as inexperienced as the characters they portray - They Live by Night was Granger's third film and O'Donnell's fourth - yet both bring enormous sensitivity and a disarming naturalness to the material that makes it both relatable and heartbreaking. Their palpable chemistry produces a believable romance that's fueled more by emptiness, need, and a longing for safety and security than unbridled passion. These aren't two crazy kids in love; these are two battered souls who cling to each other like orphans in a storm and hope to find that elusive place in the sun where they can finally breathe. Life has beaten them down, but their starry-eyed optimism obscures the dark clouds that continually encircle them.

Ray would go on to direct a number of excellent features - In a Lonely Place and Rebel Without a Cause chief among them - but They Live by Night always will be regarded as one of his finest productions. It's not easy to capture fleeting, elusive feelings on film, but Ray's strong insights into the demons that dog us and the aching longing that often consumes us allow him to tell textured stories examining rarely explored recesses of the human condition. They Live by Night is one of those movies. It's not perfect, but the imperfections make it all the more real. And in those moments when it's real, it's magnificent. 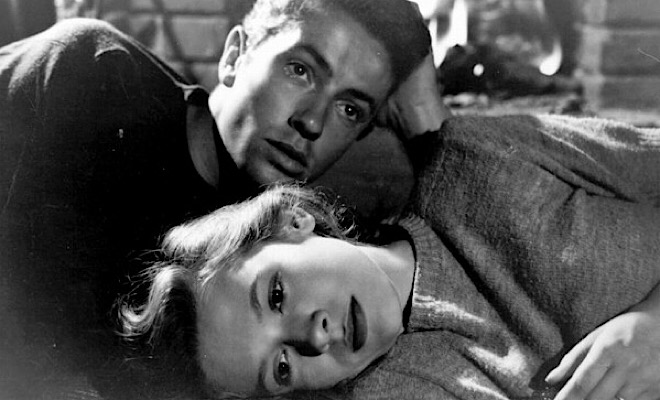 They Live By Night arrives on Blu-ray packaged in a standard Criterion case. A 12-page, fold-out booklet featuring an essay by film historian and Nicholas Ray biographer Bernard Eisenschitz, a couple of black-and-white photos, a cast and crew listing, and transfer notes is tucked inside the front cover. Video codec is 1080p/AVC MPEG-4 and audio is LPCM mono. Once the disc is inserted into the player, the static menu with music immediately pops up; no previews or promos precede it.

The mix of gritty location shooting and more polished studio interiors makes for a challenging video presentation, but Criterion's stellar 1080p/AVC MPEG-4 transfer nicely scales such hurdles. According to the liner notes, "this new digital transfer was created in 2K resolution...from a 35 mm safety fine-grain positive made from the original camera negative." Grain levels fluctuate, but they never overwhelm the image and always lend the picture a lovely film-like feel. Contrast and clarity are quite good - the close-ups of O'Donnell and especially Granger drip with Hollywood glamour despite the dusty settings - and superior gray scale variance highlights details and enhances depth. Black levels are extra rich (a couple of instances of crush could be detected), whites are bright but never bloom, and location scenes blend seamlessly into the broader fabric of the film. Best of all, only a few stray marks dot the beautifully restored source material. Low-budget films rarely look like a million bucks, but They Live by Night comes close.

They Live by Night relies on natural sounds to complement the on-screen action, and Criterion's newly remastered LPCM mono track renders them well. Atmospherics, such as crickets, are especially effective, but revving car engines, screeching wheels, and dancing flames also come through clearly. All the dialogue is easy to comprehend, and the music by Leigh Harline (who won Oscars for scoring Walt Disney's Pinocchio and writing the iconic Disney song 'When You Wish Upon a Star') fills the room with ease. Any age-related hiss, pops, or crackles have been erased, and no distortion is present, which is good news indeed. This isn't the most active track, but it suits the film perfectly.

All of the extras from the 2007 DVD have been ported over to this release, and Criterion has also included a couple of other interesting supplements on the disc.

Audio Commentary - Noir expert Eddie Muller sits down with actor Farley Granger for this 2007 track that starts out strong, but becomes a tad tedious toward the end. Muller is always great on his own, packing his remarks with insight, analysis, trivia, and worthwhile historical information, but his struggles to coax comments out of the soft-spoken, slightly reticent Granger add an awkwardness to the discussion that disrupts its flow. Granger recalls how he was cast in They Live by Night, talks about why the film was shelved for a couple of years, shares his memories of Nicholas Ray and Cathy O'Donnell, and cites Ray and Hitchcock as the two best directors with whom he's worked. Muller delves much deeper, comparing the movie to its source novel, outlining myriad censorship issues that plagued the project, identifying scene deletions, and relating title changes. He also notes Robert Mitchum desperately wanted the role that went to Howard da Silva, calls Granger "the original James Dean," likens the film's romantic sequences to those in Ray's later Rebel Without a Cause, and dubs They Live by Night the greatest directorial debut of the 1940s alongside Citizen Kane. Though not as absorbing as one might hope, this is still a solid commentary that noir aficionados will certainly enjoy.

Interview with Imogen Sara Smith (HD, 21 minutes) - Film writer Imogen Sara Smith shares her views on They Live by Night and Nicholas Ray, noting the film's Romeo and Juliet and Bonnie and Clyde qualities and praising the infusion of naturalism and romanticism into a hard-boiled genre. She also explores how the movie helped expand noir stories into rural areas, explains the importance of automobiles and roadside culture to noir films, and analyzes Ray's position as a Hollywood outsider who often shunned mainstream sensibilities. Rare photos and a few film clips complement this absorbing discussion.

Audio Interview with John Houseman (HD, 7 minutes) - In this vintage 1956 interview, the producer of They Live by Night relates how he got into films, how he expanded the role of a producer into the creative realm, and the evolution of artistic material from escapist fare to more complex topics. Still photos of Houseman accompany his remarks.

Featurette: "They Live by Night: The Twisted Road" (HD, 6 minutes) - This breezy, swiftly paced piece packs in comments by film experts Alain Silver, James Ursini, and Molly Haskell (who calls They Live by Night "one of the great love stories of Hollywood cinema") and filmmakers Oliver Stone and Christopher Coppola, all of whom laud the movie, outline its themes, and examine Ray's innovative technique.

Nicholas Ray was one of Hollywood's most unconventional filmmakers, and his deeply affecting directorial debut infuses fresh elements into the film noir genre. They Live by Night combines post-World War II realism with a tender, tragic romance between an escaped convict who can't disentangle himself from a criminal web and the starry-eyed girlfriend who believes he can go straight. Rarely does film noir strike such an intense emotional chord, and Criterion's high-quality Blu-ray presentation (featuring restored video and audio transfers and a diverse array of supplements) coupled with the beautiful performances of Farley Granger and Cathy O'Donnell make this realistic tale of doomed young love unforgettable. Highly recommended.

Sale Price 21.24
List Price 39.95
Buy Now
3rd Party 21.19
In Stock.
See what people are saying about this story or others
See Comments in Forum
Previous Next
Pre-Orders
Tomorrow's latest releases