When Clawdeen dreams of opening a salon made for monsters and normies, Frankie has the perfect place – an abandoned power station outside town. But the idea sparks negative voltage when Moanica plots to ruin the whole thing and replace the celebration with something a little more…shocking! Luckily the ghouls have a secret weapon on their side…Twyla, the daughter of the Boogey Man, and the perfect ghoul to unearth any mystery. Along with her ghoulfriends, they must thwart Moanica’s plan, charge up their outfits, save the normie town from darkness…and open the most voltageous salon ever! So catch every twist, turn, zap and blast…because the Monster High ghouls are about to get electric!

Breaking from the tradition of other entries in the Monster High franchise, Electrified interestingly plays like a loose sequel to the last movie, which focused primarily on the school's origins and founding. None of the animated made-for-television movies, based on the popular toy franchise, are particularly remarkable or noteworthy -- their target audience are toddlers and children up to preadolescence, after all. But of the fifteen TV specials so far produced, a couple have managed to surprise me with some very mild adult themes underlying most productions and inspirational plots without also seeming didactic. This latest installment, unfortunately, doesn't fall in the category of pleasantly surprising, which isn't all bad. It's just a bit more plain and ordinary than the rest. Still, the movie has its charm, and its standout feature is a story that further expands on its predecessor while also introducing a few new characters. Well, new to those unfamiliar with this horror-inspired universe, as they are likely recognizable figures to loyal fans.

Taking place sometime shortly after the events of Welcome to Monster High, the movie immediately kicks into high gear as Draculaura and her ghoulish fiends track down yet another misunderstood monster from those mean and intolerant humans. Staying true to the school's mission statement, providing a safe haven for monsters everywhere, they rescue Silvi Timberwolf, an Irish-accented werewolf making her debut but oddly doesn't play any other major role in the story. Later, however, we see her forming a rock band with other characters that were introduced in the previous movie, but the biggest highlight in that subplot is them arguing over the band's name and genre. Silvi wants to play modern goth rock, which is cutely fitting seeing as how they're already suitably dressed for it, but Deuce Gorgon's suggestion to play dark heavy metal makes the most logical sense. In the end, they fuse those two with alternative grunge and a touch of smooth jazz that amazingly sounds like a charming mess. 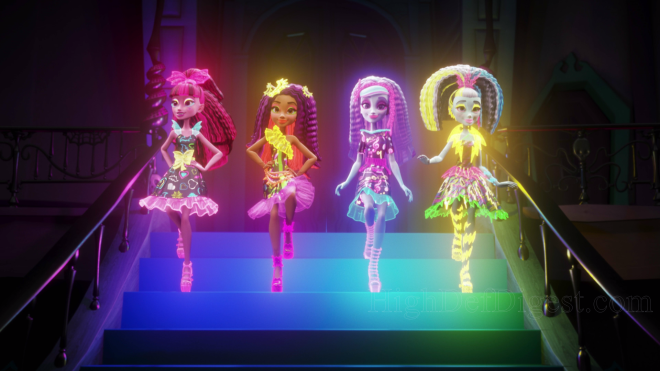 The central plot, however, centers around Clawdeen's budding dreams as a fashion designer, which is an aspiration visited more thoroughly in Scaris, City of Frights, and of opening a hair salon that caters to both monsters and "normies" (the humans) alike. This feels more like standard scare formula, promoting uplifting and altruistic notions of equality and acceptance for the kiddies. Without really much of an explanation, Frankie knows of the perfect place for the salon where the ghouls can also show off some of Clawdeen's original neon-colored clothesline. The bossy Cleo de Nile appoints herself supervisor of the project because she's always demonstrated a talent for interior design, though the finished product is comically underwhelming. (But again, this is for the little monsters in the family.) Funny, I can't recall anyone else participating, except for a few asides from Draculaura and Lagoona Blue while Ari Hauntington, the ghostly popstar who changes into a normie, spreads word on social media about the salon, building-up expectations to anxiety-ridden levels.

And of course, as is always typical of the franchise, things do not go smoothly for the gang, and in Electrified, Moanica D'Kay, the zombie with a fashion sense and a massive chip on her shoulders, creates a whole lot of trouble. Much like she did in the previous movie, she wants revenge on human civilization for their cruelty and sees the salon as the right opportunity. It's up to Frankie and Twyla, the Boogey Man's daughter, to stop Moanica, but Frankie has her own issues to contend with. As usual, a bunch of shenanigans and hijinks ensue, leading to the creation of a new, cute little bolt of lightning in Znap. The plot isn't overcomplicated or really touch anything as interesting as other installments, but it has its moments, particularly with Frankie's new electrifying personality. Nevertheless, fans and the little tykes will enjoy this entry as a step to, hopefully, greater things.

Universal Studios Home Entertainment brings Monster High: Electrified to Blu-ray as a two-disc combo pack with a code for an UltraViolet Digital Copy. A Region Free, BD50 disc sits opposite a DVD-9 inside a regular blue keepcase with a glossy, embossed slipcover and a small catalog for collectors. After a couple skippable trailers, viewers are taken to a menu screen with full-motion clips, music and the usual options.

As expected, the next chapter in the Monster High series arrives in the usual the economical one-dimensional style of computer animation. Nevertheless, the seemingly plain and ordinary Saturday morning cartoon style displays sharp, elaborate detailing in the ghouls' fashionable clothes and hair. The rest of 1080p/AVC MPEG-4 encode comes with resolute fine lines along various objects, the school's garden and the spook-tacular Haunted High building. Brightness levels are full-bodied with rich, inky blacks while contrast is comfortably bright with crisp, energetic whites. Much of the color palette is geared towards bold, vibrant secondary hues, providing the 1.78 image with a buoyant, neon feel, and primaries are richly saturated with an often flamboyant and striking glow. However, there are several instances of banding to distract from the presentation's more positive aspects.

The teen ghouls scare their latest frightful adventure with another excellent 5.1 DTS-HD MA soundtrack. However, much of the action is located in the fronts, reminding viewers of its made-for-television origins. Nevertheless, the lossless mix sounds great, providing a satisfyingly wide soundstage filled with various convincing off-screen activity. With vocals very well-prioritized and intelligible in the center, movement across all three channels is flawless while dynamic range maintains distinct clarity and a surprisingly punchy and responsive bass provides weight. On a couple occasions, the rears are very lightly employed for the more elaborate action sequences, nicely enhancing the soundfield with seamless panning.

Ever After High (HD, 24 min): An episode from the webseries, a companion piece to Monster High, is included, entitled "Epic Winter – Snow Day."

In an interesting change to the usual pattern of the franchise, Monster High: Electrified is like a loose sequel to the previous movie, Welcome to Monster High. Many of the same characters not only return, but the plot feels as though as extension to everything that happened before it, taking place shortly after the events of its predecessor. Still, it's not one of their strongest features and ultimately feels more like a placeholder for hopefully greater things. The Blu-ray arrives with the same Saturday morning cartoon style, but the video shows a great deal color variety and definition, while the audio presentation is essentially the same as others. With the usual set of supplements, the overall package will likely only attract fans, parents and collectors of the fashion doll franchise.