Sale Price 14.98
Buy Now
3rd Party 3.44
Temporarily out of stock. We are working hard to be back in stock. Place your order and we’ll email you when we have an estimated delivery date. You won’t be charged until the item ships.
Release Date: September 27th, 2016
Movie Release Year: 2016
Release Country: United States
COLLAPSE INFO -

Monsters once lived in hiding—even from each other—because they were afraid they would be in danger if humans knew they existed. But Draculaura, the daughter of Dracula, along with her best ghoulfriends, dreamt of a school where everyone was welcome and accepted for who they are. Determined to make their dream come true, the ghouls travel the world on an epic adventure to recruit new students. But even in this amazing place, there's drama: a villainess zombie is spreading trouble rather than friendship, and every student must live with the fear that their secret will be revealed. Now the ghouls must save their school so that every monster has a place where they belong and their uniqueness is celebrated!

I suppose it was bound to happen sooner or later. The "Triple R" virus (remake, reimaging and reboot) currently infecting the Hollywood system, if left untreated for too long, was eventually going to spread and contaminate children's programming. Far as I can tell, the latest animated entry in the 'Monster High' franchise, 'Welcome to Monster High,' is the first victim to fall prey to this culturally dangerous contagion, polluting and corrupting the imagination into a mush of lazy, uninspired and largely hackneyed dribble. Then again, as biology and millions of years of evolution have taught us, such fast-spreading diseases are not entirely bad or the death knell of a species. They can be the kick to the immune system needed for spurring the imagination's survival — a mutation, if you will, that could prove beneficial rather than the extinction. Granted, there are more badly infected "Triple R" features than good, but at least, those that have managed to survive and persist forge a path for others to imitate. And I'm happy to report that the latest installment to the TV special series benefits from the "Triple R" virus.

For our next visit to this horror-inspired universe based on the fashion-doll toy franchise, the filmmakers take their young audience back to the beginning before the school was constructed. Basically, it's a retelling of Monster High's history with several details and events altered from the short webisodes fans have enjoyed over the years, creating a new timeline presumably future full-length entries will now have to follow. At this point, I'm not sure if should be embarrassed for knowing all this or feel smug for being well-informed, but I've been following the series long enough to simply absorb this information with each entry. Either way, for fans, the biggest change is how the five central ghouls — Draculaura, Frankie Stein, Clawdeen Wolf, Cleo de Nile and Lagoona Blue, children of Universal's iconic monsters — became friends and their immediate involvement in the school's construction. Shane Amsterdam, Stephen Donnelly and Dana Starfield's script changes Dracula's castle into the school's foundation, adding rooms and hallways to the mansion against the vampire's soft protests and consternations while his daughter continues to bring other monster strays home. 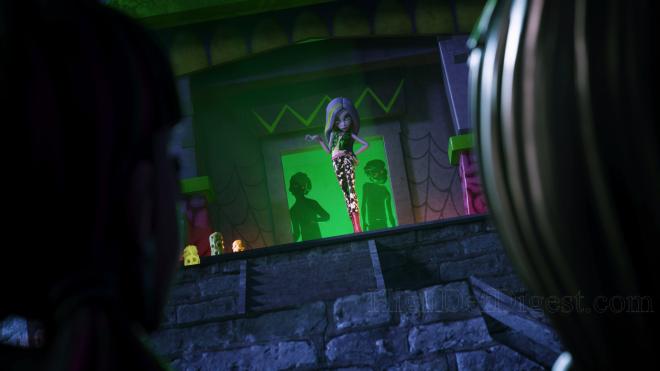 As the school grows and the student body balloons within a matter of weeks, the institution is promoted as a safe haven from those intolerant and hostile humans — cutely referred to as "normies." This is a place where a monster's unusual uniqueness is celebrated rather than feared or ridiculed, all walks of life are welcomed no matter how strange or foreign. This becomes Draculaura and Frankie Stein's motto when the two decide to run for the first student council as equal partners. Of course, as is often the case in such tales of virtuously noble intentions, the ghouls are challenged by newest cast member Moanica D'Kay, a zombie outsider with a chip on her shoulder who speaks from her dead-hearted, prejudiced and undiplomatic gut. Convinced the school is her first step towards a desired zombie apocalypse, she enters the election under the illusion of creating peace and a better place for all monsters through coercion. Who would have ever predicted this animated series would serve as an amusingly inspiring allegory of our current political race?

Of course, I'm only kidding about that. But there's no denying the similarities are eerie and surprising while also providing young viewers with a lesson about the dangers of intolerance. As is customary of all the features in the franchise, 'Welcome to Monster High' comes with the usual theme of inclusion and peace through diversity. The ways in which filmmakers portray this unifying idea in uniquely different morality tales is ultimately the real joy behind the series, one which parents can surely stand behind and feel confident their little monsters will take to heart. The Moanica D'Kay storyline interestingly adds an unexpected layer of maturity to the franchise while also exploring some potentially darker undertones for possible future projects. A major drawback — or rather, a technical detail that I'm sure only old fuddy-duddies like myself will even take note of — is the introduction of Ari Hauntington feeling like some last-minute tack-on, feigning both a surprise twist and the series' other moral theme of being true to one's self. But otherwise, this is possibly the strongest and best installment in the 'Monster High' franchise.

Universal Studios Home Entertainment brings 'Monster High: Welcome to Monster High' to Blu-ray as a two-disc combo pack with a code for an UltraViolet Digital Copy. A Region Free, BD50 disc sits opposite a DVD-9 inside a regular blue keepcase with a glossy, embossed slipcover and a small catalog for collectors. After a couple skippable trailers, viewers are taken to a menu screen with full-motion clips, music and the usual options.

Staying true to the economical Saturday morning cartoon style as others in the franchise, this latest entry is also the best-looking title of the bunch.

In spite of its simplistic style, the computer-generated animation comes with a beautiful 3D quality that almost makes it look like the result of stop-motion photography. The 1080p/AVC MPEG-4 encode arrives with sharply-rendered fine lines around various objects and buildings. The elaborate outfits of the ghoulish gals are highly-detailed, and viewers can actually make out the stitching and fabric in the clothing while some of the characters reveal texture and negligible blemishes. The color palette is mostly geared towards primaries which are richly saturated and pronounced, but secondary hues are also quite bold to give the 1.78:1 frame a buoyant and energetic feel. Blacks are inky rich and penetrating while contrast levels are comfortably bright and very well-balanced.

Overall, it's an attractive high-def presentation with only a couple minor instances of very mild banding in exterior nighttime sequences.

As with its predecessors, the teen ghouls build their school on the back of an excellent DTS-HD Master Audio soundtrack that still feels every bit like it was made for television.

With much of the action taking place in the front, the soundstage feels wide and welcoming, filled with various off-screen activity that's decently amusing and convincing. Vocals are well-prioritized and intelligible in the center with flawless movement across all three channels. Dynamic range maintains distinct clarity and a punchy, responsive bass provides weight.

On a few occasions, the design comes with amusing rear activity, such as the cheers and hallway chattering of other students. Other intermittent effects pan around the listening area fluidly, nicely enhancing the soundfield and generating a couple satisfyingly immersive moments. In the end, younger viewers will enjoy this reimaging of Monster High history.

Although the latest installment to the 'Monster High' franchise falls victim to the "Triple R" virus, 'Welcome to Monster High' is nonetheless decently entertaining for the entire family. As is customary of all the features in the franchise, the story touches on the usual theme of peace through diversity while also experimenting with slightly darker, more mature undertones. The Blu-ray arrives with the same Saturday morning cartoon style, but the video shows a great deal color variety and definition, making it the best-looking release of the series, while the audio presentation is essentially the same as others. With the usual set of supplements, the overall package will likely only attract fans, parents and collectors of the fashion doll franchise.

Sale Price 14.98
Buy Now
3rd Party 3.44
Temporarily out of stock. We are working hard to be back in stock. Place your order and we’ll email you when we have an estimated delivery date. You won’t be charged until the item ships.
See what people are saying about this story or others
See Comments in Forum
Previous Next
Pre-Orders
Tomorrow's latest releases