When Clawdeen Wolf gets the chance to apprentice for the legendary fashion designer Madame Ghostier, she and her best ghoul friends immediately pack their bags and hop on a plane to beautiful Scaris, France. As Clawdeen competes against two worthy opponents, Skelita Calaveras and Jinafire Long, her pals Frankie Stein and Rochelle Goyle uncover clues to a spooktacular secret hidden deep beneath the cobblestone streets. Join the ghouls from Monster High for the fangtastic adventure of a lifetime in Scaris – the city where screams really do come true!

In typical 'Monster High' fashion, 'Scaris, City of Frights' delivers the friendly fears with the usual morality tale masquerading as a campfire yarn, teaching little monsters a valuable lesson on staying true to one's self. And in the eyes of these amiable and adorable fiends, imagined as the children of classic Universal monsters, the more frightfully unconventional and strange, the better. With each new installment to the toddler-friendly cartoon series, I've noticed the animated spinoff of the popular fashion doll franchise slowly maturating with very mildly complex adult themes the intended target audience can understand and appreciate. Granted, the same moral remains at the center of every story, unifying the spooky universe into a larger whole, but each fearsome adventure comes at it from a different perspective, from the point of view of a unique character personally affected and challenged by an outside force peer-pressuring and tempting her to change. This new entry is no different; only, it raises the stakes slightly by confronting the burdens of the adult world.

It's due to this growth, in terms of storytelling and a willingness to challenge young viewers more, that the series is finally starting to grow on me. Not that I've fully embraced the franchise to the point of collecting the dolls or related merchandise, but rather, the hour-long TV specials and related full-length features that air on Nickelodeon cable stations have gained my respect. This latest edition, in particular, was surprisingly a bit more entertaining than its predecessors because it takes one of the franchise's better-known characters, Clawdeen Wolf, out of her comfort zone and sees her doubting her distinctive creativity in favor of winning the approval of her idol. Although Cleo de Nile is usually seen as the compulsive fashionista of the group, Clawdeen steals the spotlight as an aspiring fashion designer, opening the short film with a surprise after school fashion show in the spooky mansion-like hallways of Monster High. Being a cartoon for elementary age kids, the clothes design is far from offensive, but they come with a cutesy punk edge that'll impressive viewers nonetheless. 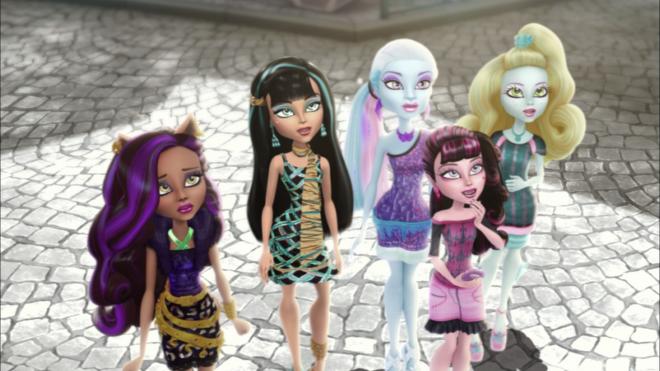 Showing the filmmakers are hip to the trends kids care about, the other teenage ghouls record the "Fashion Mob" on their handy coffin-shaped cell phones — I want one of those! — and uploaded the event to "FrightTube" where it received a gazillion views, as Draculaura puts it. The viral video catches the eye of world renowned fashion designer Moanatella Ghostier, who is currently struggling with developing a new clothing line for the upcoming season, so she devises a competitive internship program for a new protégé. It's easy to see where this is going and terrifyingly predictable, including the Rochelle Goyle and Garrott du Roque subplot, but for the little tykes of the family, the storyline will likely leave them surprised by the turn of events. What I enjoyed best, however, was the introduction of two new characters, the exotically talented Jinafire Long from Fanghai and in particular, the passionately beautiful Skelita Calaveras from Hexico. Creating a diverse set of personalities and embracing the spooky mysterious of other cultures is a nice touch to the franchise.

In spite of the predictable conclusion, 'Monster High: Scaris, City of Frights' sneaks in a few clever surprises and laughs to complement the seriousness of Clawdeen's dilemma — to sacrifice one's uniqueness for a career. Along with the charmingly creative names, the story also comes with a pair of subplots that add to the comedy. While Cleo, Abbey, Draculaura and Lagoona tour the most romantic city in the whole world with a noticeably uninterested, photo-bombing Toralei in tow, Frankie, Rochelle and Ghoulia search for Garrott through the lesser known parts of Scaris, such as the catacombs where old, weary bones are trying to rest. The short animated feature ends with an added web-based adventure called "From Fear to Eternity" where several of the ghouls, on their way back to Monster High, are sidetracked by Clawdeen's sentient sketchbook, which has a curious pet-like personality. It makes for a fun and spirited finish to an otherwise more serious storyline, one which young viewers will surely find as entertaining as it is illuminating.

Universal Studios Home Entertainment brings 'Monster High: Scaris, City of Frights' to Blu-ray as a two-disc combo pack with a code for an UltraViolet Digital Copy. A Region Free, BD50 disc sits opposite a DVD-9 inside a regular blue keepcase with a glossy, embossed slipcover. After a couple skippable trailers, viewers are taken to a menu screen with full-motion clips, music and the usual options.

As with every 'Monster High' entry, this latest installments scares Blu-ray with the same economical, one-dimensional style of computer animation. But in spite of its Saturday morning cartoon look, fine lines around various objects and buildings are fairly sharp, except the photography comes with an intentional hazy, blurry look that sometimes makes certain aspects less appealing. Nonetheless, the outfits of characters appear elaborate and detailed. Blacks are inky rich and penetrating while contrast levels are comfortably bright and very well-balanced. The color palette is mostly geared towards primaries which are richly saturated and pronounced, but secondary hues are also quite bold to give the 1.78:1 frame a buoyant and energetic feel. Sadly, I also detected hints of negligible banding around the shadows of walls and the faces of characters, and there were a couple instances of very mild aliasing along certain patterns and designs of the spooky clothing. Overall, it's an attractive high-def presentation which the kids will surely enjoy.

The teen ghouls deliver the frights in their latest fearsome adventure with another excellent DTS-HD MA soundtrack, and this is, hands down, the best 'Monster High' has ever sounded on Blu-ray. Although much of the action is located in the fronts, imaging continuously feels broad and expansive, filled with the various off-screen commotion that's highly amusing and convincing. The music also adds another layer of action, spreading across the entire screen, creating an appreciable wall of sound that's terrifically engaging. With vocals very well-prioritized and intelligible in the center, movement across all three channels is flawless while dynamic range maintains distinct clarity and a surprisingly punchy and responsive bass provides weight. On several occasions, the design employs the surround speakers for some of the more elaborate action sequences. The intermittent effects are discrete and pan around the listening area flawlessly, nicely enhancing the soundfield and generating a couple satisfyingly immersive moments.

In typical 'Monster High' fashion, 'Scaris, City of Frights' delivers the friendly fears with the usual morality tale masquerading as a campfire yarn, teaching little monsters a valuable lesson on staying true to one's self. This latest edition was surprisingly a bit more entertaining than its predecessors because it takes one of the franchise's better known characters, Clawdeen Wolf, out of her comfort zone and sees her doubting her distinctive creativity in favor of winning the approval of her idol. The Blu-ray arrives with a good-looking video and an excellent audio presentation, but the supplements are lacking. Nevertheless, the little monsters in the family will be more than satisfied.

Sale Price 8.38
List Price 14.98
Buy Now
3rd Party 4.4
In Stock.
See what people are saying about this story or others
See Comments in Forum
Previous Next
Pre-Orders
Tomorrow's latest releases