Manchester by the Sea

Casey Affleck heads a powerhouse cast in this acclaimed and deeply moving film from award-winning writer-director Kenneth Lonergan. After a solitary Boston janitor (Affleck) unexpectedly becomes the sole guardian of his 16-year-old nephew, he must come to terms with a past that separated him from his wife (Michelle Williams) and his hometown, as uncle and nephew unite for an unforgettable journey of love, community, sacrifice, and hope.

People react to tragedy and deal with grief in different ways. Natural defense mechanisms may initially numb the body, but sooner or later pain comes home to roost. Coming to terms with it, accepting the loss, and moving on takes time...often a lot of time. Some emerge from the shadows of sadness faster than others, while some remain trapped, unable - or unwilling - to hoist themselves out of the abyss. In those extreme cases, guilt, anger, and self-loathing often eat away at the soul, no matter how hard it struggles to escape their vice-like grip. And over time, all that remains is a shell of a human being.

Lee Chandler is that walking shell, and he's the central figure of writer-director Kenneth Lonergan's 'Manchester by the Sea.' Grim yet hopeful, this thoughtful film paints a sober and effective portrait of the many facets of grief as it examines a typical American family that's destroyed by one tragedy and rocked to its very core by another. Nominated for six Academy Awards, including Best Picture, Actor, Supporting Actor and Actress, Director, and Original Screenplay, this intimate tale hits several resonant notes, but rarely strikes the raw nerves that would make it really hit home. That's the fault of the script, which is literate, peppered with humor, and brimming with emotion, but not as natural and true to life as the filmmakers would like us to believe. At key moments, dialogue and situations often call attention to themselves by adopting an affected tone that takes us out of the story just when we need to be immersed in it.

Lee (Casey Affleck) is a sullen, reserved handyman who quietly performs his menial tasks while trying to avoid any interaction with his clients. One morning, while shoveling snow, he receives one of those dreaded, out-of-the-blue bad-news phone calls that will instantly change his life. Joe (Kyle Chandler), his older brother, has suddenly died, so Lee drops everything and heads up the Massachusetts coast north of Boston to the seaside village of Manchester to deal with all the loose ends. One of those is his 16-year-old nephew Patrick (Lucas Hedges), a rebellious, angst-ridden young man who used to be close to his uncle before Lee decided to leave his hometown after a horrific accident.

As Lee makes arrangements for Joe's funeral and surveys his brother's personal landscape, a flood of memories come rushing back. Some are happy, but most focus on the tragedy that transformed Lee forever and continues to haunt him. And when Joe's lawyer informs him he's been appointed Patrick's guardian (a responsibility he neither sought nor wants), Lee must confront many of his demons as he works to honor that responsibility. He tries to forge a relationship with Patrick, but has trouble getting through to the boy, who's more concerned with typical adolescent pursuits like sex, sports, and music than dealing with his father's death. Lee struggles valiantly to do what's right, but with each passing day the burden becomes heavier, testing his strength and resolve.

On a recent episode of 'Saturday Night Live,' Affleck made light of 'Manchester by the Sea' by emphasizing what an unrelenting downer it is, and he wasn't kidding. Glimmers of optimism and light-hearted moments notwithstanding, the story is achingly sad, and Lonergan's leisurely pacing often seems to prolong the agony. Filmmakers often draw out scenes in their attempt to replicate real life, padding them with insignificant business and elongating pauses for dramatic effect, and that malaise too frequently afflicts this movie, stalling its momentum and lending the narrative both a mechanical and meandering feel. And yet despite its emphasis on "everyday" people and how they navigate a relatable reality, 'Manchester by the Sea' doesn't always ring true, and that's a shame. (Some judicious tightening would sharpen the film's edges and heighten its emotional impact without altering tone or sacrificing character development.) Even the excessive cursing, especially in the opening scenes, seems self-conscious. I don't mind a flurry of "f" bombs, but people of all social classes exhibit decorum when situations warrant it - even when in extreme emotional distress - and Lonergan doesn't seem to grasp that.

At times, the film is quite reminiscent of Robert Redford's 'Ordinary People' and, to a lesser extent, Robert Benton's 'Kramer vs. Kramer' as it tries to tackle universal familial issues in a straightforward and incisive manner. Unfortunately, both of those films do it better than 'Manchester by the Sea.' Lonergan, however, blessedly resists any temptation to Hollywood-ize the ending. Much to my relief, the movie makes no concessions as it marches toward its measured and perfectly pitched conclusion, and gains considerable strength as a result.

Affleck is the picture's undeniable heart and soul, and he crafts a beautifully modulated, understated portrayal. It's hard to convey all-consuming pain with blank stares and vacant expressions, but somehow Affleck does. A bit of sublimated aggression occasionally pops out to relieve the pressure, but most of the time Lee keeps his emotions tightly corked, yet Affleck always provides a window into his despair. (It will be interesting to see whether his restrained yet potent performance will outshine Denzel Washington's showier theatrics at this year's Oscars, which tend to favor big, bold turns over quiet introspection.) He creates excellent chemistry with Williams (whose heart-wrenching work almost steals the movie) and especially Hedges, who embodies the complexities of adolescence without trivializing them. Watching all these fine performers interact is one of the movie's great - and only - joys.

Still, 'Manchester by the Sea' doesn't quite add up to the sum of its parts. Though it's hard not to embrace such an earnest and well-meaning motion picture - especially because they come at a premium these days - some productions need to be held to a higher standard, and this is one of them. Despite superior performances and a classy presentation, Lonergan's film just misses the bullseye. The director brilliantly captures many moments, but real life is difficult to believably and consistently dramatize, especially over the course of 138 minutes, and too many small missteps ultimately bring the movie up short. Yes, 'Manchester by the Sea' is one of the year's better films; it's just not as great as it could and should be. 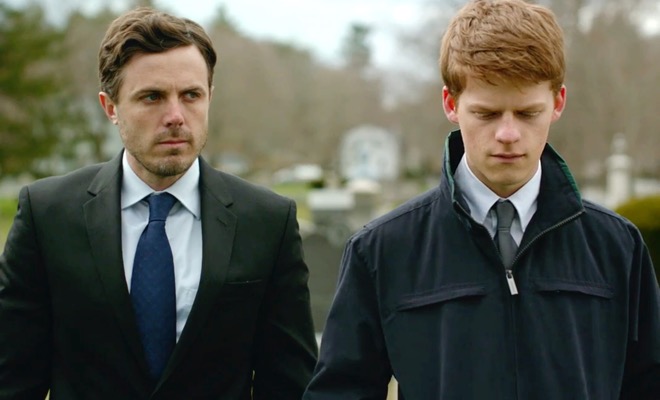 'Manchester by the Sea' arrives on Blu-ray packaged in a standard case inside a sleeve. A leaflet containing the code to access the Digital HD Ultraviolet copy is tucked inside the front cover. Video codec is 1080p/AVC MPEG-4 and audio is DTS-HD Master Audio 5.1. Once the disc is inserted into the player, previews for  'Southside With You,' 'Patriots Day,' 'Indignation,' 'La La Land,' and 'Café Society' precede the full-motion menu with music.

The crisp, clear 1080p/AVC MPEG-4 transfer from Lionsgate exudes plenty of vibrancy, yet sports a touch of harshness that nicely reflects the film's somber nature. Colors are slightly muted and the frigid, bleak New England winterscape is well rendered. Not a stitch of grain is present and no nicks, marks, or scratches dot the pristine source material. Black levels are rich, shadow delineation is quite good (crush is never an issue), whites are bright but never bloom, and flesh tones remain natural and stable throughout. Close-ups highlight fine facial details well, background elements are easy to discern, and a lovely sense of depth draws us into the action. Best of all, no digital anomalies could be detected, and any enhancements escape notice. This is a very solid effort overall that should play well on any display and please the film's wide fan base.

Though hardly flashy, the DTS-HD Master Audio 5.1 track supplies clear, well-modulated sound. Surround effects are faint at best; there's not much bleed into the rear channels, although some noticeable stereo separation up front minimally widens the audio field. A wide dynamic scale handles all the highs and lows without a hint of distortion, and superior fidelity and tonal depth distinguish the various music selections, which range from classical choral pieces to big band jazz. Most of the time, the dialogue is easy to comprehend, but a bit of mumbling obscures a few words and exchanges. Atmospherics like wind make subtle impressions and a couple of sonic bursts - aided by strong bass frequencies - grab our attention. While this track won't test the limits of your sound system, it does its job well, complementing the story without overpowering it.

Just a few supplements are included on the disc.

'Manchester by the Sea' has been an awards season darling - and deserves much of the praise heaped upon it - but despite excellent performances and a palpable sense of humanity, I found it remote, overlong, and strangely self-conscious. This somber tale of multiple tragedies and how those involved either rise above or become consumed by them has many fine, affecting moments - and adroitly uses humor to offset the prevailing sadness - but the film too often meanders and feels achingly real one minute and disturbingly artificial the next, making a sustained connection difficult. Top-quality video and audio transfers and a couple of decent supplements distinguish Lionsgate's Blu-ray presentation, which is strong enough to help a movie I liked but didn't love earn a recommendation.

Sale Price 14.99
List Price 19.99
Buy Now
3rd Party 13.36
In Stock.
See what people are saying about this story or others
See Comments in Forum
Previous Next
Pre-Orders
Tomorrow's latest releases