Passions ignite and cultures clash in this provocative coming-of-age story based on the best-selling novel by Philip Roth. After Marcus (Logan Lerman), a brilliant working-class Jewish student from New Jersey, arrives at a small, conservative college in Ohio, he becomes infatuated with a beautiful classmate, Olivia (Sarah Gadon). Their mutual attraction sparks a torrid encounter with consequences Marcus never imagined, putting his family's best-laid plans—and his own beliefs—to the ultimate test.

Comparing a novel to its film version is always a dicey proposition, namely because the screen treatment almost never lives up to its literary source. And how could it? Character development is rarely as comprehensive, plot points must be condensed, excised, or altered for the medium, and a director's or screenwriter's interpretation of the story may not match our own. Whether to read the book before or after watching the movie is another tough dilemma, but in the case of 'Indignation,' my respect and admiration for Pulitzer Prize-winning author Philip Roth compelled me to pick up his acclaimed novel prior to viewing its adaptation. I'm glad I did, and though the movie stands well enough on its own, I think you should, too.

A riveting read from the first page to the last, 'Indignation' utterly consumed me with its flawless combination of memorable characters, potent, relatable themes, and a fascinating, surprising, and ultimately devastating narrative that's both simple and profound. Like many of Roth's works, 'Indignation' is tough to take...and shake, and though I looked forward to seeing the movie after completing the book, I tempered my excitement by reminding myself Roth usually doesn't translate well to the screen. Before popping in the disc, I began predicting (and worrying) how the tale might be told, what changes might be made, and how the novel's myriad yet essential subtleties might be woven into its cinematic fabric.

And sadly, most of my predictions came true. Don't get me wrong. 'Indignation' is a well-directed, well-acted film that explores adult themes with intelligence and grace. Its script deeply respects its source, yet doesn't transmit Roth's message nearly as well as the author himself and can't come close to wielding the novel's level of gravitas. Roth is a genius, a master of construction and execution, and it's hard to believe any film could do justice to his impeccable prose, just as other fine movies like 'Sophie's Choice' and 'Revolutionary Road' fall short of their lofty source novels, despite superior performances and faithful adaptations.

Within an intimate framework and without much fanfare, 'Indignation' examines the arrogance and recklessness of youth, the fragility of our existence, and how the tiniest, most insignificant choices - or a single, misguided, hot-headed outburst - can alter the trajectory of our lives. It's about religious bigotry and hypocrisy, the overbearing love parents have for their children, the destructive nature of fear and paranoia, the pressure of expectations, and the double-edged sword of self-esteem. That's a rich tapestry of themes, and James Schamus in his directorial debut admirably works them all into his screenplay. Unfortunately, his commitment to ideas comes at the expense of a few crucial plot points, and their omission or truncation dulls the story's impact. The result is still a thought-provoking, atmospheric film, but uneven pacing often stunts the narrative's momentum and compromises the picture's entertainment value.

Like many of his protagonists, Mark Messner (Logan Lerman) is an unmistakable reflection of Roth himself. Responsible, smart, and driven, Mark is a model son who's about to leave the bosom of his close-knit, working class Jewish family in Newark, New Jersey for the bucolic, conservative, largely Christian campus of Winesburg College in rural Ohio. (If Winesburg sounds familiar, it's an intentional homage to Sherwood Anderson's classic portrait of small-town life and peronsal isolation, 'Winesburg, Ohio.') An only child, Mark becomes fed up with his father's obsessive and suffocating worry over his safety, future, and the choices he makes, and yearns for some independence. Mr. Messner (Danny Burstein) tries to impress upon his son how the slightest misstep can derail a burgeoning life, and the raging Korean War, which has taken the lives of many of Newark's finest young men, fuels his fears. The war's looming presence also affects Mark, who avoids the draft by going to college and whose greatest mission, aside from graduating with honors, is making sure he doesn't die a virgin.

So when he spies the comely Olivia Hutton (Sarah Gadon) in the college library, he becomes instantly smitten, and steels his courage to ask her out. Their date deeply affects both of them in different ways, and the fallout, along with Mark's inability to fit in socially and dogged reluctance to respect Winesburg's rigid requirements, inspires the school's stuffy dean of students (the marvelous Tracy Letts) to request a meeting with Mark. And that fiery confrontation sets in motion a series of events that irrevocably alters Mark's life.

A literate script, superior production values, and finely etched portrayals distinguish the film version of 'Indignation,' but it lacks the urgency and immediacy of Roth's book. In the novel, we're inside Mark's cluttered head, and he lays bare his hopes, obsessions, irrational fears, paranoia, warped perceptions, and, yes, indignation with disarming frankness. Unfortunately, the movie fails to capture his voice (more narration would have helped), and consequently, we don't get the full brunt of Mark's character. Couple that with a sterility of tone and lack of passion, and we've got a film that frustratingly keeps us at arm's length. In the book, we are Mark, but in the movie, we watch Mark, and the harm that visceral disconnect does to the film can't be overstated. It's almost as if Schamus respects Roth too much, and his concerns - ironically, much like Mark's - over dropping the ball and living up to both expectations prevent him from fully embracing this vital, furious tale.

Two shocking twists (neither of which I will reveal here) help define the book. Both are bombshells that provoke gasps and change our perspective of the story. Roth flawlessly executes both of them, thanks to his supreme command of language, structure, and style. Regrettably, Schamus bungles the first, almost throwing it away. ('Indignation' would actually play better if he omitted it entirely.) Literary devices often can't be replicated on screen, and this one hurts the film more than helps it. Adding insult to injury, a handful of significant events from the novel do not make it into the film. If you haven't read the book, you won't miss them, but their absence robs the movie of essential drama, pertinent atmosphere, and critical motivation.

Let's face it, popular fiction is easier to adapt than literature, namely because popular fiction is usually written with a movie in mind. Books like 'Indignation' have a higher cinematic bar, which make them difficult to judge on their own merits. If I hadn't read Roth's book before seeing the film, I might have liked the movie more, but I doubt it would have inspired me to read the novel. And thus I would have missed out on one of the best books from one of America's finest authors. Though it didn't excite or move me the way it should have, 'Indignation' the movie is elegant and incisive, and if you're sure you will never pick up the book, it's well worth seeing. But I beseech you to read Roth's close-to-perfect novel, and then decide whether to watch the film. 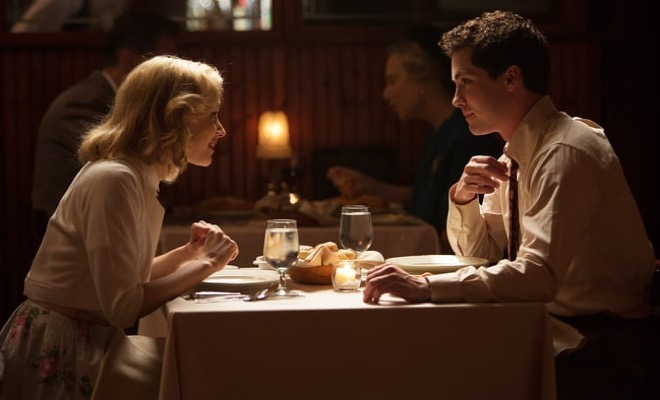 'Indignation' arrives on Blu-ray packaged in a standard case inside a sleeve. A leaflet containing a code to access the Digital HD Ultraviolet copy is tucked inside the front cover. Video codec is 1080p/AVC MPEG-4 and audio is DTS-HD Master Audio 5.1. Once the disc is inserted into the player, previews for 'Southside With You,' 'American Pastoral,' 'Genius,' and 'A Hologram for the King' precede the full-motion menu with music.

A nostalgic warmth and beautiful richness distinguish the 1080p/AVC MPEG-4 transfer and instantly immerse us in the period setting. Exceptional clarity and contrast lend the image vibrancy and depth, while a slight golden glow helps the digital picture achieve a lovely film-like feel. Black levels are dense, whites are bright, flesh tones appear natural, and lush colors, especially reds, supply some punch. A bit of crush occasionally intrudes during dark scenes, but shadow delineation is generally strong, costumes textures are well rendered, and patterns remain rock solid and resist shimmering. Razor sharp close-ups highlight facial details well, and not a nick, scratch, or stray mark mars the pristine source material. This is another top-notch transfer from Lionsgate that will surely please fans of this affecting drama.

'Indignation' is largely a quiet, intimate film, and the DTS-HD Master Audio 5.1 track serves it well. Though surround activity is faint at best, some stereo separation across the front channels lends the audio an expansive feel. Subtle nuances come across well, excellent fidelity enhances the understated music score and period song selections, and all the dialogue - even when uttered in the faintest of whispers - is clear and easy to comprehend. A wide dynamic scale keeps distortion at bay and solid bass frequencies supply welcome weight. This track weaves itself seamlessly into the film's fabric, and its unobtrusive nature is its greatest strength.

Film adaptations of brilliant novels almost always come up short, and 'Indignation' is no exception. Though Philip Roth's haunting examination of the insignificant choices that profoundly shape a young man's life is given a fine screen treatment by writer-director James Schamus, the movie - despite excellent performances and top-flight production values - lacks the texture, nuance, and impact that make the book such a rich and rewarding experience. A terrific video transfer, solid audio, and a couple of extras distinguish Lionsgate's Blu-ray presentation, but the film version of 'Indignation' can't hold a candle to its literary counterpart. It's still worth a look, especially for those who appreciate serious, thought-provoking motion pictures, but please, do yourself a favor and read the book, too.