A New Yorker named Bobby (Jesse Eisenberg) moves to Hollywood in the 1930s to work for his uncle Phil (Steve Carell), a powerful and well-connected agent. He soon falls for Phil's secretary Vonnie (Kristen Stewart), unaware that she's secretly having an affair with his uncle. In time, a disillusioned Bobby returns home to run a nightclub for his gangster brother (Corey Stoll). Written and directed by Woody Allen, Cafe Society made its world premiere at the 2016 Cannes Film Festival.

We all want to be invited to the party. You know, that exclusive hangout where the elite not only meet, but also hobnob with other stylish, obscenely wealthy people, trade vapid stories about exotic travel, drop famous names with casual disregard, drink gallons of cocktails, and laugh hysterically at bad jokes. It's a high-class club and membership is limited to those who can buy or sleep their way in.

Back in the 1930s, it was called café society, and from the outside looking in it seems glamorous, vivacious, decadent, ritzy, and oh so FUN! Surely nobody who flits about in that realm has a care in the world. How can they? They're so rich, so sophisticated, so gorgeous, so perfect. But take off the makeup, undo the tie, and unzip the gown, and those icons of style and stature are different people who often lead far different lives than we perceive. Pressures overwhelm them, regrets haunt them, struggles persist, and issues of right and wrong weigh them down. Life is a journey, and the choices we make have lasting consequences that shape and alter us, and fancy clothes, cigarettes, caviar, and booze only salve the wounds and help us forget our transgressions. Are we happy getting what we think we want? Or do we force ourselves to like what we end up getting? Maybe we just yearn for something else.

Writer-director Woody Allen examines all these vagaries with a keen eye and within a deceptively frothy framework in 'Café Society,' a film that's as beautiful and captivating as the world it often depicts. Though slight and wispy on the surface, it explores some thoughtful underlying themes, touching upon matters of morality, conscience, and social influence that help tinge its romantic story with an affecting bit of melancholy. Allen's scripts may not be as pointed and hilarious as they once were, but the layering and texture is still there. No one explores the complex and elusive human condition with as much acuity as Allen, and no one explores its ticks and contradictions with as much subtlety and sensitivity. Allen doesn't always get it right, but when he does, it's magic, pure and simple. 'Café Society' just misses the bullseye, but it's one of Allen's better recent works, and the spell it casts is quite seductive indeed.

Like a Russian novelist, Allen once again weaves a rich character tapestry, efficiently stitching together the Dorfman family in the film's opening frames. Bobby (Jesse Eisenberg) is an affable young man who lives with his middle-class parents, Rose (Jeannie Berlin) and Marty (Ken Stott). His sister Evelyn (Sari Lennick) is a schoolteacher and his brother Ben (Corey Stoll) is a small-time gangster who has no compunction knocking off those who cross him. Eager to seek his fortune and expand his horizons, Bobby hopes to break into the picture business and heads to Hollywood to look up his uncle, Phil Stern (Steve Carell), one of the industry's top agents. Phil initially gives Bobby the run-around, but eventually makes a half-hearted attempt to help him by giving him a mailroom job. He also enlists one of his secretaries, Vonnie (Kristen Stewart), to give Bobby a Tinseltown tour and get him acclimated.

In an artificial town defined by glitz and wealth, Vonnie is a breath of fresh air, and her lack of pretense and grounded ideals instantly appeal to Bobby, who becomes smitten. Vonnie, however, has a boyfriend, and unbeknownst to Bobby, we learn it's his Uncle Phil, who strings Vonnie along as he consistently waffles over whether or not he'll leave his wife. The tenuous nature of their romance frustrates Vonnie, and when Phil briefly breaks it off, she and Bobby fall in love. Yet Bobby soon finds out about her relationship with Phil, and the fallout changes both of their lives. As Bobby and Vonnie mature, they both embrace the empty high life, and as Bobby's family faces a crisis, everyone begins evaluating their choices and values.

Allen has a peerless grasp of the past, and his forays into nostalgia - 'Radio Days,' 'The Purple Rose of Cairo,' and 'Broadway Danny Rose' - exude a warmth, sensitivity, and resonance that many of his contemporary movies lack. 'Café Society' may not be as strong as those films, but it still fits snugly into the group, evoking the atmosphere of 1930s Hollywood and New York with artistry, insight, and reverence. Taking us on a tour of movie star homes, inserting vintage clips of Barbara Stanwyck, Jean Harlow, Spencer Tracy, and William Powell, and littering the soundtrack with standards from the Great American Songbook immerse us in the period, as do the pitch-perfect art direction, gorgeously lush cinematography, and stylized scene transitions. Just drinking in the imagery is a joyous experience.

Typical of his recent films, the script meanders a bit, but it balances humor and sentiment well. (And, like 'Hannah and Her Sisters,' it stitches together an intimate family fabric.) The jokes may be muted and not as plentiful as one might hope, but Allen lands a few choice zingers that provoke a spirited response. (He also punctuates his screenplay with morsels of simple wisdom, such as the astute and personal line, "In matters of the heart, people do foolish things.") As always, his characters are well drawn and he manages them well, defining them with a few swift brush strokes. Only a handful of writers can say as much with so few words, and only a couple of directors can translate their own prose into poetic images on screen. Allen is a true artist, and he's in fine form here.

The ensemble cast isn't quite the all-star assemblage that has populated previous Allen productions, but the limited renown of some of the actors helps focus attention more completely on the story and its gentle nuances. Eisenberg especially shines as Bobby, almost eerily resembling a young Woody Allen in manner, look, and speech pattern. His performance is more of an evocation than an impersonation, but it nicely complements Allen's uncredited narration. I've never been much of a Stewart fan, but she projects an affecting sweetness and vulnerability, and Carell, a last-minute replacement for Bruce Willis (who reportedly was canned due to poor behavior and an inability to remember his lines), perfectly transmits the arrogance and self-absorption that have defined so many of Allen's characters over the years. Blake Lively, Parker Posey, Jeannie Berlin, Corey Stoll, and Stephen Kunken also make notable impressions.

Almost all of Allen's films play better on subsequent viewings when their myriad subtleties can be properly digested, but 'Café Society' is enjoyable and resonant the first time through. Wistful, romantic, nostalgic, reflective, and tinged with Allen's wry wit, this richly textured light comedy paints a vivid portrait of a bygone era and the various social influences that define it. 'Café Society' may never be defined as one of Allen's great works, but it's a solid, smart, entertaining effort that will delight fans of classy adult fare. 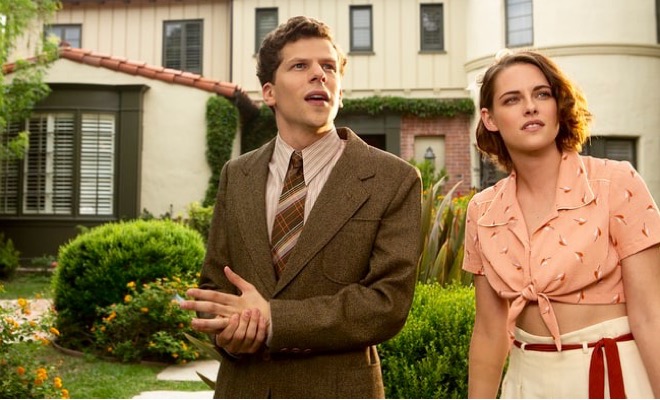 'Café Society' arrives on Blu-ray packaged in a standard case inside a sleeve. A leaflet with a code to access the Digital HD Ultraviolet copy is tucked inside the front cover. Video codec is 1080p/AVC MPEG-4 and audio is DTS-HD Master Audio 5.1. Once the disc is inserted into the player, the full-motion menu with music immediately pops up; no previews or promos precede it.

Almost all of Allen's films are impeccably photographed, but 'Café Society' indisputably ranks as one of the director's most breathtakingly beautiful movies. Bathed in a warm nostalgic glow that's punctuated by rich colors, inky black levels, and crisp whites, the vivid image instantly dazzles the eyes and transports us back to a storied bygone era. This is the first time Allen has shot a film with digital equipment and the first time he has collaborated with cinematographer Vittorio Storaro, who has worked previously and extensively with Bernardo Bertolucci, Francis Ford Coppola, and Warren Beatty (and won Academy Awards for 'Apocalypse Now,' 'Reds,' and 'The Last Emperor'). Both choices benefit this movie. The opening shot of a glamorous pool patio against a night sky features razor sharp reflections and dreamy bluish hues, both of which set the visual tone. Whether vibrant or muted, Storaro's stunning cinematography is perfectly rendered by this first-class 1080p/AVC MPEG-4 transfer, which is distinguished by eye-popping clarity, striking contrast, and a palpable sense of depth. Not a stitch of grain is present and the spotless source material looks freshly minted. Both bright exteriors and dimly lit interiors are perfectly pitched, and the picture is enhanced by superb shadow delineation, natural flesh tones, and rock-solid patterns. Background elements are easy to discern, close-ups brim with fine details, and no crush, noise, or banding crop up. While I enjoy the story and performances of 'Café Society,' I would watch this film again in a heartbeat solely to soak up the beauty of this exceptional transfer.

Multi-channel audio hasn't always been Allen's thing, but in recent years he has implemented the technology, even if he hasn't whole-heartedly embraced it. His intimate films don't really require full-fledged surround sound, and 'Café Society' is no exception. That said, the DTS-HD Master Audio 5.1 track does provide a warmth and fullness of tone that beautifully complements this nostalgic story. Surround activity is faint at best, but bits of nuance do emanate from the rear speakers, and the musical soundtrack of classic standards, most of which are written by Richard Rodgers and Lorenz Hart, benefit from superior fidelity and a lovely depth of tone. Dialogue is always front and center in Allen films, and it's properly prioritized here. All the banter, narration, musings, and pointed one-liners are clear and easy to comprehend, and no distortion or anomalies muck up the mix. No one expects a wow factor from the audio of Allen films, but the subtle shadings and crystal clarity of this track enhance the viewing experience.

Typical of Woody Allen home video releases, only the slimmest of supplements are included on the disc. This time, we don't even get a trailer.

When Woody Allen gets nostalgic, he often strikes a resonant chord, and though 'Café Society' may not rank among the writer-director's best films, this wistful, quietly affecting trifle showcases colorful characters and paints a beautiful portrait of a bygone era. Touching, romantic, and peppered with Allen's trademark wit, 'Café Society' gently explores matters of the heart and conscience without an agenda, and is distinguished by fine performances and a lush visual style. The Blu-ray presentation skimps on supplements (par for the course for an Allen release), but features a dazzling video transfer and top-notch audio, both of which heighten the film's impact. 'Café Society' may be simple and understated, but it's impeccably mounted, very entertaining, and easy to recommend.

Sale Price 14.31
List Price 39.99
Buy Now
3rd Party 5.16
In Stock.
See what people are saying about this story or others
See Comments in Forum
Previous Next
Pre-Orders
Tomorrow's latest releases