A female cyborg cop and her partner hunt a mysterious and powerful hacker called the Puppet Master.

For many contemporary moviegoers, 'Ghost in the Shell' may not seem like the revolutionary sci-fi masterpiece it's endlessly celebrated for, especially when we have 'Blade Runner,' 'eXistenZ' and 'The Matrix' doing much of the same thing. Heck, even 'Dark City,' 'Gattaca,' 'Hardware,' 'Johnny Mnemonic' and 'Strange Days' dare to ask similar questions and explore comparable philosophical dilemmas. The concept surrounding this Japanese production, based on the popular manga of the same name by Masamune Shirow, is ultimately nothing new. Or, at least, it doesn't feel like it anymore. This is especially true when more recent productions are still tackling the same subject matter with embarrassingly bad results. 'Blackhat' will likely go down as Michael Mann's worst film to date, and Johnny Depp arguably gave one of his most awkward performances in 'Transcendence' while 'Vice' is a tragic mess that's well beneath the status of both Bruce Willis and Thomas Jane, which is saying quite a lot.

However, in spite of those terribly bad movies, back in 1995, the film took audiences by surprise, even the loyal followers of the genre, with themes that still felt relatively new and fresh. With the internet slowly becoming the choice of communication at the time, the movie touched on some a rather pertinent ideas that were far ahead of their time. The script by Kazunori It? ('.hack//Sign,' 'Patlabor,' 'Pistol Opera') imagines a not-too-distant future where the world has become fully interconnected via a vast digital network that ideally has made borders meaningless, yet nations and governments continue with outmoded ideologies. Most of humanity accesses the web through cybernetic bodies, and cyborgs have amazingly become a normal part of life, such as our main protagonist, special agent Major Motoko Kusanagi. By the year 2029, cyber crimes, cyber warfare and any act of circumventing security programming systems are a serious threat to national security, prompting the need for specialized police forces like Public Security Section 9 where Kusanagi serves as assault team leader.

In this cyberpunk digital future, these seemingly dangerous threats open doors to more troubling concerns about our humanity and sense of self. While on the hunt for the highly enigmatic and equivocal hacker Puppet Master, Kusanagi starts to ponder on her own identity and the illusion of a soul when her a majority of her body is augmented and synthetic — a "shell." And yet, her cognizant brain filled with memories of a life lived inform her understanding of a unique personality, a consciousness and any ideas of a soul — a "ghost." Unable to uncover the true identity of the hacker and in conversations with her trusted partner Batou, she muses on concrete definitions of "human," what separates human from machine when the mind can be transplanted into artificial bodies and what exactly is a soul if it requires a malleable consciousness to construct it? These questions become all the more disturbing when Kusanagi finally captures the Puppet Master only to discover there isn't a physical person, neither male or female or mortal, but a rogue sentient program that somehow developed the emotional desire to live as a complete life-form. 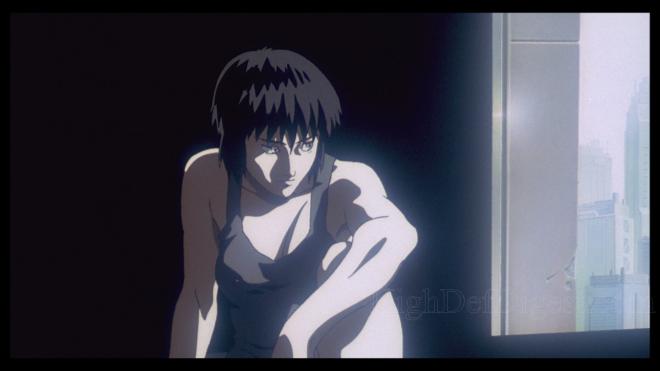 For the time in which it was made, 'Ghost in the Shell' was an astonishing motion picture with themes few movies even dared to question. The film pushed the boundaries of animation into unprecedented territory, demonstrating that this type of filmmaking can be beautiful and thought-provoking while following a challenging storyline that respected the intelligence of its audience. Director Mamoru Oshii ('The Sky Crawlers,' 'Patlabor 2: The Movie,' 'Ghost in the Shell 2: Innocence') and his team filled the screen with stunning imagery and a cinematic elegance the genuinely felt as though meditating and reflecting upon the issues it brought up. The amazing art design from highly-talented artists that seamlessly blended traditional cel animation with the latest in CG imagery leaves viewers pondering on the possibilities of such a future coming into existence. While capturing one's imagination with striking animation, it leaves viewers wondering about deep philosophical paradoxes.

To contemporary audiences, it may no longer seem as fresh as it once did because so many other movies have tried to do much of the same in the years since the release of 'Ghost in the Shell." And that only proves the film's cultural impact and lasting legacy, influencing other filmmakers like Steven Spielberg, James Cameron and, of course, the Wachowskis siblings. And the fact that we now have a live-action version in the works shows the story and the questions posed remain as relevant as ever in this deeply interconnected, social-media obsessive 21st Century culture.

Anchor Bay Entertainment brings 'Ghost in the Shell' to Blu-ray in time for the new live-action film and dubbed "Limited Mondo Steelbook." The Region A locked, BD25 disc is housed inside an attractively colorful steelbook package with a plastic, transparent slipcover. At startup, viewers are taken directly to an interactive menu screen with full-motion clips and music.

The classic sci-fi anime is now on its fifth iteration on Blu-ray — it's been available in Asia and Europe for some time — and it's the third time it's been made available in the U.S. The 2009 "digitally-enhanced" version offered one of the best presentations of the film ever, in spite of it suffering from a mild case of "Lucasitis." (Hey, it's a thing!) Back and forth comparisons reveal this new Mondo steelbook is identical to the 25th anniversary edition from 2009, which gave fans the original unaltered version of the film, so I'll simply repeat my previous thoughts.

The 1080p/AVC MPEG-4 encode appears to have been made from the same dated master used for the Japanese import. Bits of dirt, white specks and very mild vertical lines are apparent from time to time, and the video also comes with a very strange anomaly. It almost seems as though the original 1.85:1 aspect ratio has been "windowboxed," meaning the picture has a very noticeable black border all around. And to be perfectly honest, it is very distracting and frustrating to see the movie released like this.

Overlooking this bizarre feature, the presentation, at least, now has the hazy, soft-focus lens look it was always meant to have, and beyond that, the video is terrifically sharp and detailed. Fine lines are distinct, and the lettering on signs and buildings are intelligible. Contrast is comfortably bright while blacks are inky rich with excellent shadow delineation. Colors are not particularly bold, but then again, the film's overall palette has always a bit restrained. Nevertheless, primaries are cleanly rendered and appreciably bright. In the end, longtime fans will have to wait for another edition of the original movie with a proper restoration of the elements.

Like the video, this new steelbook edition arrives with the same uncompressed PCM stereo track found on the Japanese import while the English track is a DTS-HD Master Audio offering, which is both good and bad. So, with that in mind, I'll again repeat my previous comments.

The good is that the film has always had a Dolby SR soundtrack, and this linear stereo soundtrack is arguably faithful to that original design. It delivers crisp, clean dialogue with plenty of distinct background activity. Imaging has great presence with detailed clarity in the mid-range, and it plays terrifically well when applying the receiver's digital signal processing function, such as Dolby ProLogic IIx. The English track offers much of the same, except that the surrounds are utilized more effectively and discretely to create a more satisfying sense of space.

The bad in both is that the low-end is terribly lacking, almost nonexistent. Granted, there is a bit of bass that can be heard during explosions and gunfire, but they are so light and stretched thin that they practically feel forced and artificial. But the part that really bothers is the fact the two-disc special edition DVD came with a pair of excellent 6.1 DTS-ES remixes for the original Japanese and the English dub, both of which were then upgraded to DTS-HD Master Audio for the 2009 Blu-ray. So, why in the world they wouldn't offer the same option here for fans is a complete mystery, let alone a huge disappointment that ultimately makes this a mediocre edition.

For many contemporary moviegoers, 'Ghost in the Shell' may not seem like the revolutionary sci-fi masterpiece it's endlessly celebrated for, especially when other movies with similar themes are readily available. But back in 1995, the film took audiences by surprise with themes that felt relatively fresh, and it has made a lasting, influential impact that can still be seen today. For this limited Mondo steelbook edition, the Blu-ray appears to have been from the same dated master as the Japanese release and doesn't offer any bonus material, tempting only the most loyal of fans.

Sale Price 24.92
List Price 29.97
Buy Now
3rd Party 17.48
In Stock.
See what people are saying about this story or others
See Comments in Forum
Previous Next
Pre-Orders
Tomorrow's latest releases