Set within the world of global cybercrime, Blackhat follows a furloughed convict and his American and Chinese partners as they hunt a high-level cybercrime network from Chicago to Los Angeles to Hong Kong to Jakarta.

The idea of cybercrime currently holds a tenuous place in our culture. It is equally at home being potentially terrifying, and absurdly laughable. While a legitimate cyber terrorism threat certainly exists, there's still enough of the "technology scares old people" line of thinking going around to make stories about it walk a fine line between prescience and preposterousness (we can all thank CBS's ridiculous 'CSI: Cyber' for not only maintaining a portion of the culture's inability to take cybercrime seriously, but also to completely misunderstand what it actually is). Thankfully, when Michael Mann decided to take on the topic in his underrated action-thriller 'Blackhat,' the acclaimed director chose to view all the keyboard cowboy stuff from a distinctly human level.

The magic of 'Blackhat' isn't that the movie takes seriously the notion of cyberterrorism; it's the way in which it handles cyberterrorism's potential impact on the world in which it takes place. Here, criminals no longer strong arm their way into banks 'Heat' or 'Public Enemies'-style; they influence systems from thousands of miles away, moving ones and zeroes around, manipulating cooling systems and stock markets as a precursor to even more audacious and murderous cash grabs. It is a shift many are not ready to see as a tangible threat. And yet, in an astute demonstration of this epic shift from the physical to the virtual, the film opens with a thrilling sequence in which an unseen antagonist sends an undetected code into the computerized workings of a Chinese nuclear power plant. It's a bit of visual shorthand that fancifully tells the audience everything they need to know, as the virtual virus replicates and spreads through the circulatory system of the plant's mainframe, causing the cooling fans to stop working and a meltdown to occur.

This is all to say, 'Blackhat' is a cybernetic thriller with some concrete ideas behind it. It is also a slick, loud, often gorgeous piece of filmmaking that revels as much in its more ludicrous storytelling moments as it does in the beautiful distance it places between the camera's eye and its characters. That is to say, many of the film's primary cast – beginning and ending with Chris Hemsworth's buffed up hacker/furloughed convict Nicholas Hathaway – often feel a little remote, a little underwritten. And yet, the sometimes-paper-thin characterization of the stellar and diverse cast that includes Leehom Wang and Wei Tang as brother-sister cybercrime-fighting duo Dawai and Lien Chen, Holt McCallany as US Deputy Marshal Mark Jessup, and the wonderful Viola Davis and John Ortiz, as FBI agents Carol Barrett and Henry Pollack, somehow works within the subtext of Mann's film, as it wrestles with matters of tangibility in an increasingly virtual landscape.

In a sense, Hemsworth's physical presence is all the tangibility the film needs. Hathaway exists at surprisingly versatile superman, as quick and deadly with a keyboard as he is with a screwdriver in a gunfight. He's James Bond in the Michael Mann universe: a canny individual who spends time reading Foucault or doing pushups in his prison cell, but still stops to take a moment to drink in some sunlight after he's been furloughed. And yet, even though we get a sense that there's no situation Hathaway can't handle, there's really no sense of who he is as a person. His backstory is primarily tied up with Dawai Chen's, as it's revealed the two were college roommates who worked on a code that's been exploited by the unnamed hacker the American and Chinese governments are desperately trying to track down. 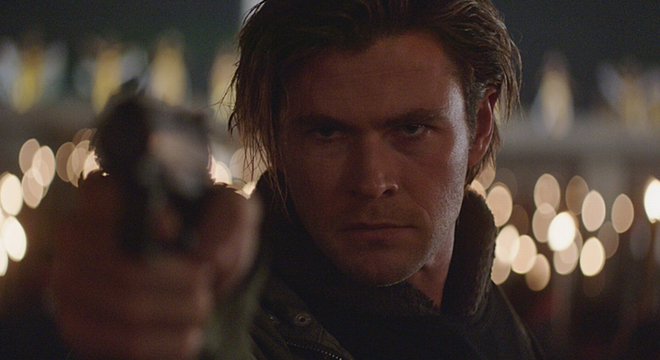 The plot moves at a relentless pace, sending Hathaway and his cohort from Chicago, to Los Angeles, to Hong Kong, and finally Jakarta. It's an international excursion the likes of which the aforementioned 007 would undertake, and Mann doesn't miss a moment to fill the screen with skyline shots of each city that border on architectural eroticism. But he also doesn't miss a chance to flesh out Morgan Davis Foehl's screenplay by filling the rare silence with furtive but meaningful glances between characters that hint at the character hiding behind that ultra-cool exterior. For example, Viola Davis' edgy agent first appears to be a cold manipulator, but as she witnesses what Hathaway is capable of, the Barrett plays the game with unusual warmth, a facet that also works as shorthand for why some leaps in logic can be easily overlooked.

Through it all, Mann creates a steely, aggressive, and at times surprisingly burly action flick that is interested in the way we relate to technology, and how technology makes us relate to the world around us. This is no more apparent than the film's climax, which with its low-tech approach to a problem begun through keystrokes is like the director is intent on taking the audience back to a time when the tangibility of things was most important. The fact that it all goes down during a cultural ritual, in a place where the divide between the past and the present influences the future makes for a telling statement. In the end, Michael Mann is intent on making the virtual world collide with the material one, and the physicality of such a collision makes waves. 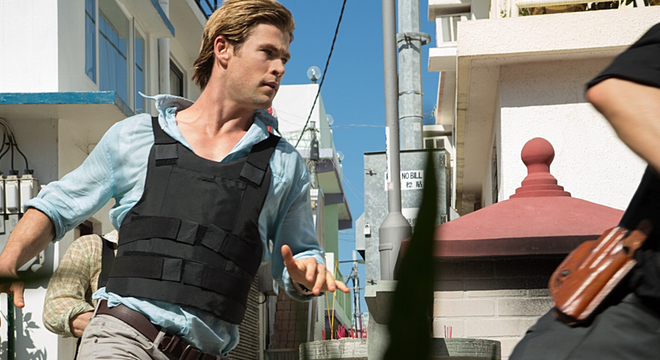 'Blackhat' comes from Universal as a 50GB Blu-ray + DVD + Digital HD Download in the standard two-disc keepcase. Like all Universal releases, the disc will upload new previews from the Internet ahead of the top menu. All previews can be skipped.

'Blackhat' has been given a crystal clear 1080 AVC/MPEG-4 encoded transfer that showcases the international settings by presenting them in a mixture of gorgeous aerial establishing shots and some gritty street-level visuals that keep the film grounded in the here and now, despite its tendencies to become silly from time to time. Fine detail is always on display, with facial features, clothing textures, and background elements being constantly highlighted. Background elements are also on display, giving the film a nice sense of depth from start to finish.

Color is balanced throughout, as Mann's visuals typically move toward the muted or filtered at times. Here, though, it seems like Mann has given each locale its own slightly different pallet. It's nothing drastic like, say, Steven Soderbergh's 'Traffic,' but the jump from the United States to Hong Kong, to Jakarta does produce a few interesting color changes that are all unique and setting appropriate. Contrast is very high, producing deep, rich blacks that make for wonderful backdrops, enhancing the characters in the foreground as the inky darkness establishes a clear outline and sharp edges rather than swallow the image up.

There are a few instances where the image goes a little soft, and perhaps headlights and skylines burn a little too brightly (which is likely a stylistic choice by Mann), but overall, this is a very sharp, detailed image that will please fans.

As noted in the review, 'Blackhat' is a loud movie…when it needs to be. As good a storyteller as Mann is, he is equally good at making his films look and sound a particular way. Here, he takes the gunshots, explosions, traffic, and helicopters and makes them all resonate with incredible force that fills the room. LFE is present both in the sound effects and the pulsating techno soundtrack that accompanies so many Mann films, giving the sound an extra layer of depth that enhances shootouts and action sequences as much as it does the quite moments when the score takes over.

Otherwise, the mix sounds terrific. Dialogue is clean and always easy to understand. Ambient noise is subtle for the most part, but when the time is right, the rear channels come alive with atmospheric sound that makes for an immersive listening experience. Balance is very good from start to finish, as dialogue takes center stage for the most part, but during the more harrowing gun battles, is noticeably lowered to enhance the chaos erupting around the characters. Directionality, too, is worth mentioning, as bullets ricochet or echo when piercing empty shipping containers or he sides of cars, and the track along with the camera's movements.

All in all, this is a technically sound and impressive audio mix.

The Cyber Threat (HD, 13 min.) – This is a brief featurette in which the cast and filmmakers discuss the threat of cyberterrorism and compare it to the way it's presented in the film.

On Location Around the World (HD, 10 min.) – One of the film's key distinguishing features is how the international locales give the film a unique visual flavor. This featurette discusses the benefits of actually film in various locales, over using soundstages or other locations to represent something else.

Creating Reality (HD, 17 min.) – This is a discussion of how the filmmakers strove to create strong characters to make the film seem more plausible and authentic.

'Blackhat' is a throwback in a sense: a thoroughly modern concept told through the lens of a '70s-style action-thriller. The pacing is frenetic, the action is tense and brutal, and the characters, although sometimes drawn a little too thin, are still engaging, thanks to terrific performances across the board. If poor reviews kept you away from this gem it might be worth it to give it a shot on this gorgeous, and terrific sounding Blu-ray. Recommended.

Sale Price 14.99
Buy Now
3rd Party 2.83
In Stock.
See what people are saying about this story or others
See Comments in Forum
Previous Next
Pre-Orders
Tomorrow's latest releases